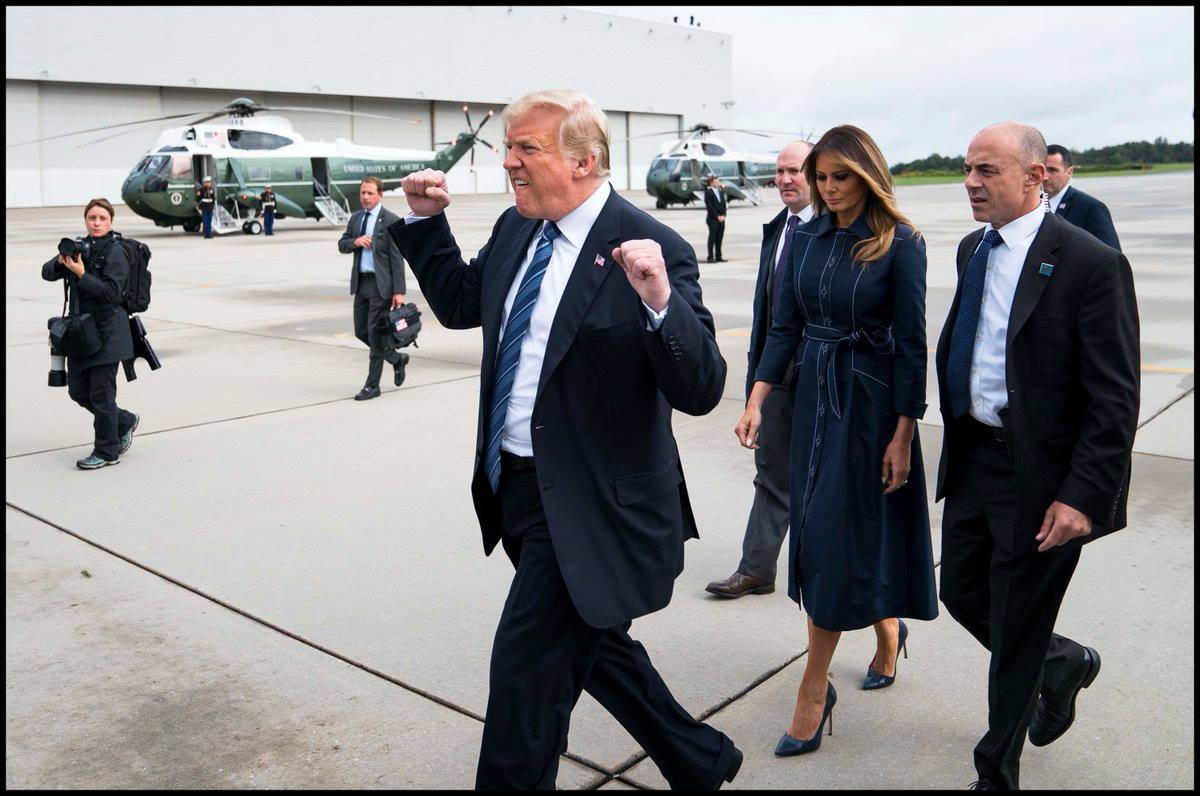 “Days before in-person jury selection is set to begin in his second trial, President Trump’s former campaign chairman Paul Manafort is in talks with the special counsel’s office about a possible plea deal,” the Washington Post reports.

“The people, who spoke on the condition of anonymity to describe the conversations, cautioned that the negotiations may not result in a deal with special counsel Robert Mueller, who is prosecuting Manafort for alleged money laundering and lobbying violations.”

“The specifics of Manafort’s current negotiations with prosecutors were unclear, including whether he would provide any information about the president. However, Manafort’s willingness to engage in talks could be a setback for Trump.”

President Trump said his administration is “sparing no expense” to prepare for Hurricane Florence, which he described as “tremendously big and tremendously wet,” and containing “tremendous amounts of water,” Roll Call reports.

Said Trump: “We are totally prepared. We are ready as anybody has ever been.”

President Trump’s campaign “canceled a second rally ahead of Hurricane Florence’s landfall, citing safety concerns as the storm threatens to wreak havoc on the East Coast,” Politico reports.  “The rally was scheduled for Thursday in Missouri to promote U.S. Senate candidate Josh Hawley, who is running against Sen. Claire McCaskill in the upcoming midterm election. The Trump campaign also canceled a rally in Mississippi on Monday in anticipation of the storm.”

I dug out some important additional revelations that illustrate this point well.

A CBO report finds the federal budget deficit hit $895 billion in the first 11 months of fiscal 2018, an increase of 32% over the same period the previous year.

Axios: “This increase was due mostly to the new Republican tax law and Congress’ routine decision to increase spending, which grew by 7% compared to revenue growth of only 1%. The CBO now says the deficit will approach $1 trillion by the end of this fiscal year, but in April the agency didn’t expect the deficit to reach $1 trillion until 2020.”

Senate Majority Leader Mitch McConnell (R-KY) “is planning to keep the chamber in session for a significant portion of October if not four entire weeks, costing Democrats key campaign trail days and allowing the chamber to continue its work into the fall,” Politico reports.

“The GOP leader wants to keep cranking through as many lifetime judicial nominations and executive nominations as he can with his majority in the balance and the GOP still with the unilateral ability to confirm President Trump’s picks.”

“Moreover, the Senate GOP only has two members who are considered vulnerable in the election: Texas Sen. Ted Cruz and Nevada Sen. Dean Heller. Democrats, meanwhile, are defending 10 total seats in states that Trump won in 2016, with at least four of them considered extremely competitive.”

The legislation is designed to rein in the influence of money and lobbying in Washington, expand voting rights in the United States, and increase public financing of campaigns. https://t.co/5zya0JGMjJ

Bob Woodward told the New York Times that a “key official” in the Trump administration privately told him that his new book is “1,000 percent true,” but later publicly said the opposite.

Said Woodward: “After the information in Fear started breaking last week, one key person who’s in office called and said ‘Everyone knows what you said here is true. It’s 1,000 percent correct.’ And then this person has said some public things that contradict that.”

President Trump “is leaning toward Emmet Flood as the next White House counsel, but West Wing officials have urged Mr. Trump not to rush the pick,” the Wall Street Journal reports.

“Mr. Trump told associates over the weekend that he wants Mr. Flood, currently serving as White House special counsel, to succeed Don McGahn… Mr. McGahn is planning to leave his role as top White House attorney after the Senate acts on the nomination of Judge Brett Kavanaugh to the Supreme Court.”

Trump repeatedly used the tragedy of 9/11 to falsely claim that he helped clear rubble (he didn’t); that his building was now the tallest in Manhattan (it wasn’t); and took $150k in government funds to help repair damage to his building (it was unharmed). https://t.co/N2LSEoXjF4

USA Today: “In one passage from Fear: Trump in the White House, Woodward described a scene in which then-candidate Trump summoned Christie to Trump Tower along with campaign CEO Steve Bannon. Trump was angry to learn that Christie, whom he made head of his transition team in May 2016, was raising money for the team’s operations.”

Said Trump: “Where the fuck is the money? I need money for my campaign. I’m putting money in my campaign and you’re fucking stealing from me.”

“Christie explained the money was necessary for the transition team to do its job of preparing Trump to smoothly take over the executive branch of the government should he defeat his Democratic opponent, Hillary Clinton.”

A new Trump administration policy will let authorities reject green card and visa applications that have an error – and applicants won't get to fix the mistake https://t.co/5UvfgC0Ff7 pic.twitter.com/ePSTGwLFN4

Five Democrats with knowledge of the site selection process for the Democratic National Convention tell Politico that the race is between Houston and Milwaukee.

“Heat, humidity and hurricanes were already among the factors weighing against Miami Beach. Some members worried about traffic and Miami Beach’s hard-partying reputation, which might muddy convention messaging. They’re also not crazy about the consideration of cruise ships as options for housing some delegates. Finally, there’s sensitivity to hosting yet another convention in the Eastern time zone while trying to portray a party that’s not anchored on the coasts.”

Said one DNC member: “Houston and Milwaukee are the only viable candidates right now. The weather, the logistics. Also, the imagery. What does the party want to portray from its convention? Do you want bikinis on the beach? Or do you want people in the heartland or a diversity of people in Texas?”

“The Trump administration, taking its third major step this year to roll back federal efforts to fight climate change, is preparing to make it significantly easier for energy companies to release methane into the atmosphere,” the New York Times reports.

“Methane, which is among the most powerful greenhouse gases, routinely leaks from oil and gas wells, and energy companies have long said that the rules requiring them to test for emissions were costly and burdensome.”

David Drucker: “The pendulum of political power, which historically swings against the White House during the midterms, could be especially savage this year, given the sharp dissatisfaction with Trump in America’s usually Republican-leaning suburbs. Washington’s high-powered consulting class is betting on it. The lobby shops and advocacy organizations that play both sides and thrive on proximity to power are preparing for a changing of the gavel and moving to forge connections with Democratic committee chairmen in the House beginning in January of 2019, when the 116th Congress is seated.”

Said one GOP lobbyist: “Downtown, there is a sense that the House is already lost for Republicans. There is a hiring spree for plugged-in House Democrats who want to lobby. So, downtown is already planning on the Democratic takeover; the bets are on how big the flip will be.”

Former Trump campaign staffer Michael Caputo told CNN that the author of the anonymous New York Times op-ed is a woman who is also a “coward” and “diabolical.”

Said Caputo: “I’m fairly certain I know who it is. I’ve been, you know, going through this parlor game just like everybody else has. And I’m also completely 100 percent certain that the person who wrote this is on the list of people who said they didn’t write it.”

Caputo also claimed that the White House is “getting there” on finding out who the author is.

“The suspicion that Russia is likely behind the alleged attacks is backed up by evidence from communications intercepts, known in the spy world as signals intelligence, amassed during a lengthy and ongoing investigation involving the FBI, the CIA and other U.S. agencies. The officials declined to elaborate on the nature of the intelligence.”

Washington Post: “An unusual political battle is raging across North Carolina, where national and state Democrats have recruited an army of candidates and are pouring millions of dollars into a campaign to loosen a years-long Republican grip on a state legislature that has turned an otherwise evenly split state into a bastion for some of the country’s most conservative laws. Among them: a limit on transgender access to bathrooms that was ultimately repealed under pressure from business leaders, congressional district maps that courts have ruled were designed to curtail the voting power of African Americans and education spending levels that have sparked mass protests at the state Capitol.”

“The campaign reflects an often-overlooked subplot of the Democratic Party’s broader push to engineer a ‘blue wave’ across the country in the November midterms — tapping into voter anger over President Trump as well as Republican policies on school funding, taxes and health care to chip away at GOP dominance in state capitals.”

Both #RonDeSantis and #Trump are mainstreaming white nationalism in ways that would have been unimaginable a decade ago.@ThePlumLineGS captures this disturbing moment.https://t.co/HDOUB9Avde