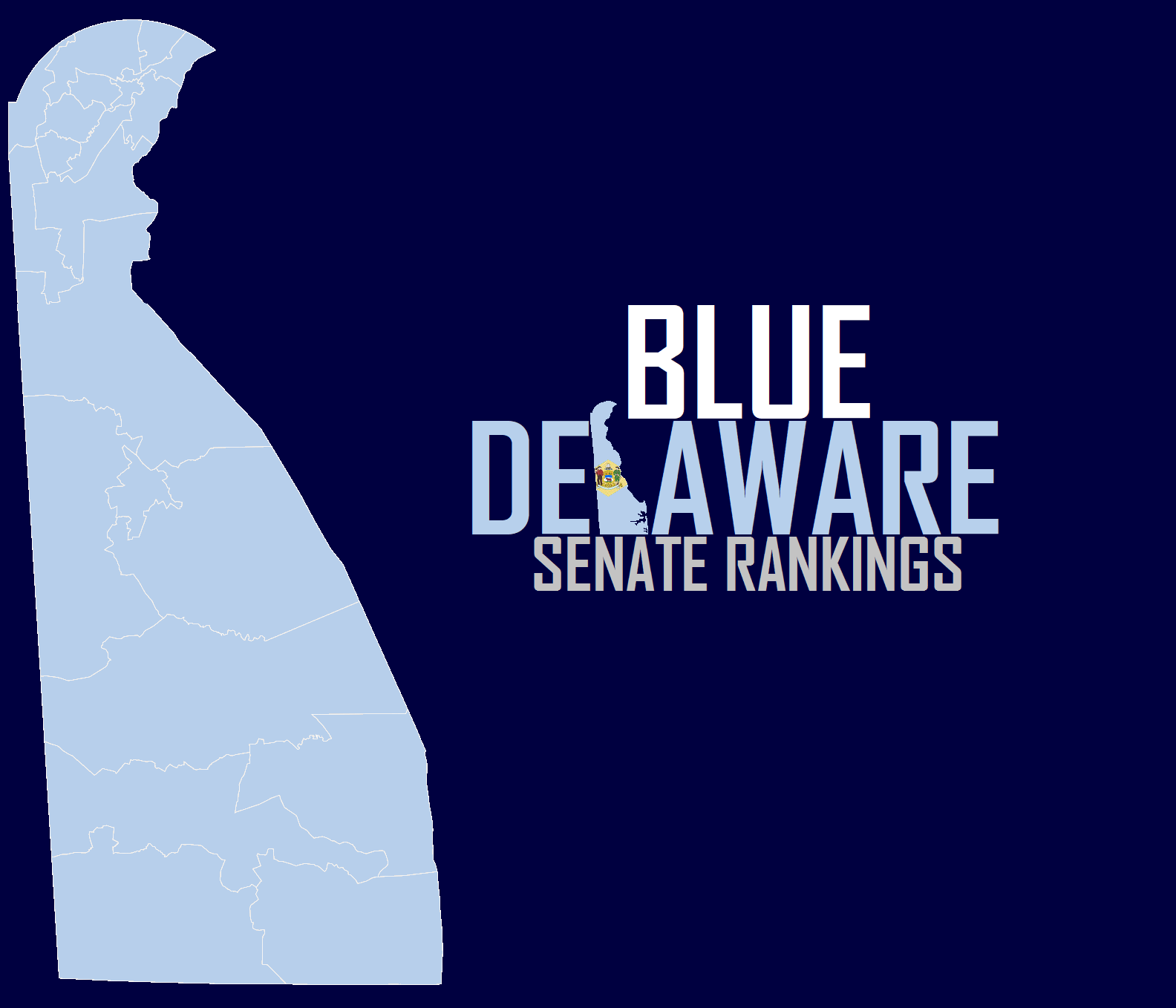 Currently, there are 11 Democrats and 10 Republicans in the State Senate.  This year, there is only one incumbent Senator who is retiring, Senator Brian Bushweller (D) in the 17th Senate District in Dover.  Therefore, the Republicans will be targeting all their efforts there to turn that seat red.  Unfortunately for them, the District seems pretty Democratic after the primary.   1,726 Republicans came out to vote for the Republican candidates, Justin King and Donyale Hall.    While Democratic candidate for the 17th District did not have a primary and thus was not only the ballot, 3,681 Democrats came out in the 17th District to vote in the US Senate primary.

On that basis, you would think that the 17th is a safe Democratic seat then, but I am classifying it as a Lean Democratic seat for two reasons: 1) it is an open election, so there is some uncertainty with two new candidates running for the Senate seat, even if Paradee and King are known in parts of the district; and 2) we don’t know for certain how independent or unaffiliated voters will break.  But given the way independents across the country are breaking for the Democrats this year, I am betting they will vote for Paradee.  Hence, the Lean Democratic designation.

First, the 4th SD.  Defeating Greg Lavelle, Delaware’s version of Paul Ryan, a pretend wonk who possesses no spine to stand up to the Trumpian/Tea Party wing of his own party, would be the crowning achievement of a Democratic Blue Wave in Delaware.   So why do I list this district as a toss up?  Doesn’t this district have more registered Republicans?   Yes, it does.   There are 14,139 registered Republicans, 12,397 registered Democrats and 9,197 unaffiliateds and others.    But this is Chateau Country, not Sussex County. Many Republicans up here are of a different breed.  Mike Castle and Pete duPont Republicans, not Christine O’Donnell and Donald Trump Republicans.   These kind of Republicans voted for Jack Markell and some of them voted for Barack Obama and Hillary Clinton.  Obama in fact won the district in 2012 50-49 and Hillary won it in 2016 54 to 41%.

In other words, this district swings back and forth every election.  A true competitive district, illustrated in these swing maps of the district from 2012 to 2018.

So you have competitive district, and then you add in the very visible and organized campaign of Democrat Laura Sturgeon.   Women candidates have been doing very well against their Democratic and Republican male rivals this year, both in Delaware and across the country.   This district is home to the type of demographic that can power a Democratic insurgent in 2018: college educated professional women.   So add that all up and the Democrats have a great shot at flipping this district from red to blue.   The reason I do not classify this district as Lean Democratic is the power of incumbency and the Illusion of Greg Lavelle as this wonky moderate Republican who is not like the Sussex Trumpsters.   If the Dems so win this race, we pick up a seat and expand our majority back to 12-9.

We could expand the majority to 13-8 if we topple Republican Ernie Lopez in the downstate 6th SD that covers Lewes and Rehoboth.  We have a good candidate in Dave Baker, but I classify this seat as Lean Republican because of the aforementioned incumbency advantage for Lopez, that is supplemented by the shall we say “cordial” relationship between Speaker Pete Schwartzkopf, Kathy McGuinness and Ernie Lopez.  Indeed, McGuiness, unfortunately now our nominee for Auditor, was pictured on Lopez’s website in recent years as a prominent supporter.  This kind of open support from prominent elected Democrats in the same district knee caps any Democratic candidate attempting to defeat Lopez, and it is outrageous conduct on the part of Schwartzkopf and McGuiness.  Demographically, there are more Democrats than Republicans in the 6th SD: 13,257 Dems to 12,051 Rethugs to 7,483 Unaffiliateds.   So for that reason, and for the reason that Lopez sometimes votes against conservative wishes, thus perhaps tampering down GOP enthusiasm to vote for him, and for the reason that this is Democratic wave year, I am classifying this seat as Lean Republican rather than Safe Republican.

Finally, with regard to the 10th Senate District, where incumbent Senator Stephanie Hansen will be running for election to a full four year term after her special election to replace Lt. Governor Bethany Hall Long back in February 2017, I classified that race as Lean Democratic rather than Safe Democratic for the sole reason that its Mrs. Hansen’s first reelection race.  Those contests are usually the most dangerous for Delaware incumbents.  But the Democratic wave should carry her through, as well has her excellent performance as Senator over the last 18 months, coupled finally with the demographics of the district: 14,677 Dems to 10,114 Rethugs to 8,044 Unaffiliateds.