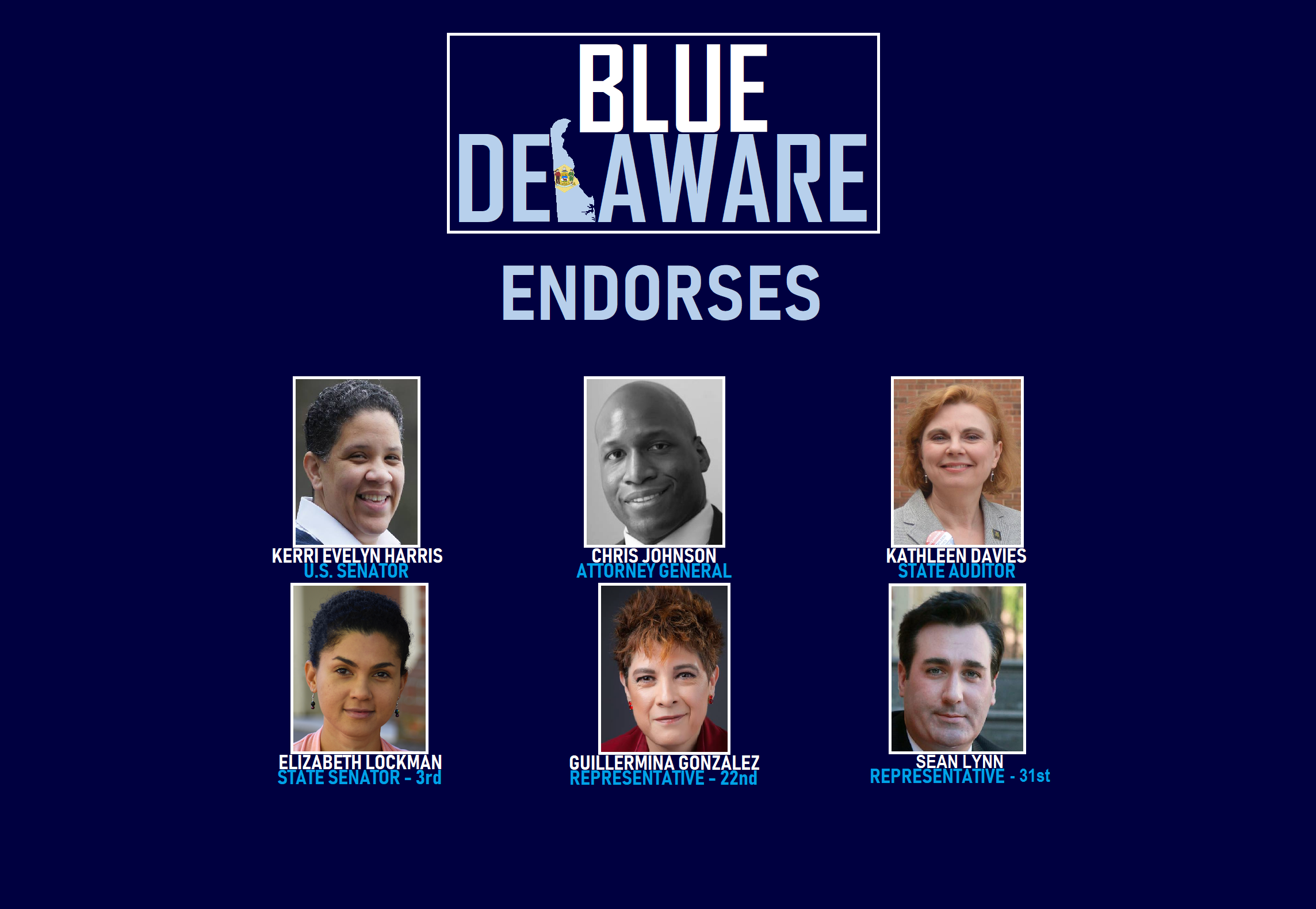 Blue Delaware is a group collaborative blog, and as such primary endorsements are a tricky issue.  Because in multi candidate races, we may all like a different candidate.   So our rule is that we only offer an endorsement when we all agree on a particular candidate.    An example of where division amongst us caused us not to endorse is the RD12 race between Rachel Blumenfeld and Krista Griffith.

A difference in opinion is not the only reason we might not endorse in a particular race.  We simply just might not know enough about a particular race and the particular candidates in it to offer our opinion on it or them.   An example of that is RD5 race to replace Melanie George Smith between Kendra Johnson and Awavi Ajavon.  One final note: our contributor Cassandra abstained from the endorsement decision in the U.S. Senate race.  The remaining contributors were unanimous in the endorsement.

So with that all said, Blue Delaware is endorsing in the top three statewide primary races and three important General Assembly primary races.

Kerri Evelyn Harris must be our next U.S. Senator.  In saying that, we must be realistic in expecting that Tom Carper will likely win.  Harris winning would be unlikely.  But it was unlikely that this race would turn competitive, but it did.  It was unlikely when Andrew Gillum and Stacey Abrams won in Florida and Georgia, respectively, but they did.  It was unlikely when Alexandria Ocasio-Cortez won in New York against the next presumptive Democratic speaker, but she did.  Sometimes things happen that are unlikely.

As I said after her brilliant debate performance last week, Kerri’s story was a perfect fit for our political moment.  That story is of a struggling working class mom and veteran who is living paycheck to paycheck.  It is the story of many if not most of us.  And that story, that life struggle, needs to be represented again in our Congress, in our Senate, not by those who have been there for 30 years, and not by those who are well off financially and past retirement age.  It needed to be represented by the struggling single mom herself.

Tom Carper has represented our state in various roles since 1977.   In 1977, I was 1.  I am 42 years old now.   Tom, your fitness and workout routine are not sufficient reasons to keep you as my, our, representative in the Senate.  This is nothing personal, this is just business, something that you represented too much in Congress, while ignoring actual people.

Chris Johnson must be our next state Attorney General.   To be fair, we have been aboard the Johnson trail since January after our interview with the candidate.  Listen to it again.  The reasons to vote for him are all right there.  If you are looking for a change in our criminal justice system, Chris Johnson is the candidate to bring it.   He beliefs in opposing the death penalty, cash bail and mandatory minimums are deeply held and are the reason he is running rather than being recently adopted to win a primary race.  Johnson has also been pursuing environmental justice in talking about water quality (or lack thereof) in Sussex County.   Delaware’s criminal justice system needs shaking it up.  Chris Johnson looks strong enough (he is a bodybuilder after all) to do it.

Kathleen Davies must be our next state Auditor.  Please Delaware Democrats, do not treat the Auditor position as we treated the Insurance Commissioner position in 2008, when we allowed an unqualified political hack to take the office and transform the office from a consumer advocate position into an insurance company advocate position.   In 2016, we are in danger of electing an unqualified political hack who will transform the office from an independent check on state agencies and school districts into a protection racket for the state power structure.

Simply put, we need to elect the candidate who not only is the most qualified for the job, but who was fired for trying to do her job in auditing the holier than thou charter schools in this state.    I have heard tell that Tom Wagner’s employees will all quit if she is elected.  Good.  We need to clean house at an agency where Tom Wagner has presided for 29 years.   Further, Kathleen is not a politician.  She is not looking for any promotions or higher office after this one.  She is an independent.  That is something we want and need in this job.

Vote for the Kathleen that actually has experience in the job.

A community leader like Tizzy Lockman is needed in the State Senate.   You name it she is involved in it.  Fighting for a better education for our kids with the Wilmington Education Improvement Commission and the Parent Advocacy Council for Education.  Fighting for social justice with the ACLU-DE.  Fighting for common sense gun control with the March For Our Lives-Wilmington.  A community organizer.  A community advocate.   She will bring new ideas on new issues into the General Assembly.

A Progressive Fighter named Sean Lynn must be returned to Dover.  And he won’t have far to drive to work.  Sean has been and will be a great Democratic and progressive representative for his Dover district, a courageous voice for the moral opposition to the death penalty.  Sean Lynn has also stood up for public education, expanded economic opportunities, criminal justice reform, public safety, a cleaner environment, and social equality.

Finally, Guillermina Gonzalez will also bring a breath of a fresh air to the General Assembly and to her district, the 22nd RD in northern Delaware that has been forever represented by Republican Joe Miro.   She is the embodiment of the American Dream: an immigrant who settles into a community and gets involved to better it from her first day there.

Editors Note: Representative Kim Williams was included in an earlier version of this story but has been removed due to the fact that her primary opponent has withdrawn from the race.   We still endorse and support Kim Williams, but including her in a primary endorsement post when she didn’t have a primary didn’t make sense.