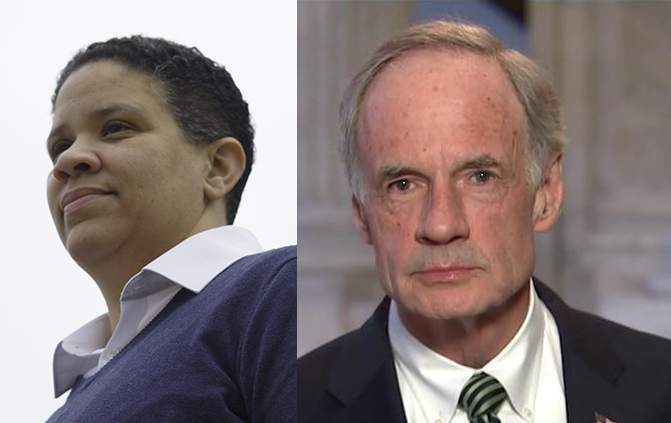 As I got to know Kerri from afar, and then after I met with her one on one regarding the campaign, I came away convinced that she had a plan and a credible campaign structure and that she had a story that negated all the expected attacks against her, and that her story was a perfect fit for our political moment.  That story is of a struggling working class mom and veteran who is living paycheck to paycheck.  It is the story of many if not most of us.  And the that story, that life struggle, needs to be represented again in our Congress, in our Senate, not by those who have been there for 30 years, and not by those who are well off financially and past retirement age.  It needed to be represented by the struggling single mom herself.

But even then, I needed to see her perform on the campaign trail in an official campaign event.  No, I am not talking about canvassing or seeing her at any number of the summer festivals shaking hands. Kerri was very good at the retail politics.  I am talking about debates and forums.    And throughout all of this, I am expected Carper to win even though I want Kerri to win.  Because Delaware is Delaware and Carper is Carper.

Last night we got the showdown we were longing for.   Kerri v. Carper.   And two things happened.

First, Kerri exceeded all possible or imaginable expectations.  She was sharp, clear, precise, and passionate in her answers.   She had plans, not just pie in the sky progressive ideals.  She sounded like the pragmatist with plans for the problems that face us: a Green New Deal, Medicare for All, College Debt Forgiveness that will spur Millennial’s participation in the economy.   Time and again, she says we have the money as a great nation to do all these things, because we waived a magic wand to find the money when we needed it to bail out the banks and to start preemptive wars.  She had Carper on his heels the entire night, seeking to follow up to Carper’s answers compared to Carper being relieved when his time to answer a question was over.

Second, Carper’s debate performance was an unmitigated disaster.   He had several moments of dead air during his answers, where he went silent searching his brain for the right answer.   It was like his very own Roth moment.   Couple that with Carper’s already difficult speaking style.   He speaks fast and with a slur that makes his difficult to understand.   All that contributed to the perception that was he was old and senile.  It did not help matters that some of Carper’s social weirdness came through as well.  For example, when talking up Dodd-Frank he shouts as a non-sequitur: “CFPB, find out what it means to me” to the tune of the very recently deceased Aretha Franklin’s “RESPECT.”

The substance of his answers were not all that better.  He thinks his record as Governor in cutting taxes is something to brag about to the Democratic primary voter.  The Democratic Primary voter recognized tax cuts as gifts to the wealthy and corporations that usually require cuts to education, healthcare and other services.   Nothing to brag about.  He lauded his work on the Dodd-Frank bill, not remembering (before Kerri reminded him) that he, just this year, voted to gut the banking regulations on many banks.

His focus on healthcare was very narrow, focusing on cost controls and reimporting drugs from Canada.  Those may be good ideas, but again, the Democratic primary electorate wants bigger and bolder answers on healthcare. Obamacare was a good first step, with the emphasis on the first.  Now it is time to go up a flight of stairs to making access to healthcare.  Carper ran into real trouble when questioned about Kavannaugh.  He says he is definitely a no now, but his 2006 vote to confirm him to the DC Circuit haunts him and Kerri made an effective attack on it.   He then went onto thanking President Trump from taking their recommendations on judicial nominees for the federal District of Delaware.   Again, not good for a Democratic primary.

Carper’s performance on style and substance have me genuinely concerned that he will lose the general election if he is the Democratic nominee.  He will have to refuse to debate Arlett or Truono to have any chance of winning.   His performance confirms the knock on him: that he is old and out of touch and a career politician.

So when you take Kerri’s superb performance, add it to Carper’s catastrophic performance, and mix in the ad below, I now believe that Kerri can win the primary outright.  Before the best hope was some moral victory of keeping Carper honest with a progressive challenge that moves him left and back to the base.  Now, as Kerri gets more and more exposure, she wins more and more votes and support.

22 comments on “Morning After Thoughts on Kerri-Carper”