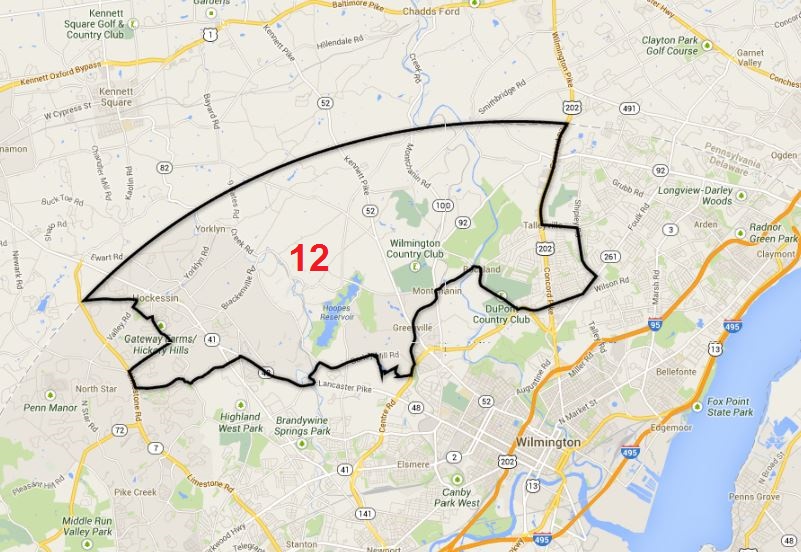 Rachel Blumenfeld and Krista Griffith are both running to be the Democratic nominee in my Representative District, the 12th RD.   As you can see in the map above, the district covers Chateau Country at the top of the state, from Hockessin in the west over to Talleyville and Fairfax in the east.  Indeed, in an act of gerrymandering, I suppose to make the district more competitive and Democratic, the middle and working class neighborhoods of Fairfax, the McDaniels and Colonial Woods (i.e. the area west of Concord Pike that is in the district and where I live for you stalkers out there) were added to the district after the last census.

Though, in the only contested election incumbent Republican Deborah Hudson has had after the 2010, her winning percentage of 65% to Democrat Jeff Porter’s 35% in 2014.  Prior to 2010, when Hudson was challenged by Democrat Henry Gravell in 2004 and 2006, the winning percentage in both years was exactly the same: 65% to 35%.   Hudson’s closest election was her first reelection race in 1996: besting Brenda Smart 59% to 41%.

So the history of this district is that of a Republican District, even though the voter registration numbers would lead you to think otherwise.  Currently, there are 7,086 registered Democrats, 7,387 registered Republicans and 5,424 registered others (third parties, unaffiliated, etc).  In the 2016 Presidential Election, Hillary Clinton won the district 7,668 to 5,990 (or 53% to 41%).   So Hillary attracted non-Democratic support while Trump lagged woefully because his party’s registration numbers in the district, which is what you would expect of Chateau Country Republicans.  These Republicans are the rich establishment GOP, led by the likes of Mike Castle and Pete DuPont rather than Christine O’Donnell and Rob Arlett.  While they like their tax cuts, they are social moderates or even liberals.   Some of them probably voted for Hillary.  Some of them voted for Markell over Carney in the 2008 Democratic primary.

In a Democratic year that 2018 will be, where women of all political stripes are being motivated to vote and engage in political campaigns due to the misogynist in the White House, can the women of the 12th RD flip this district from red to blue?   In 2016, Hudson received 9,228 votes running unopposed.  In 2014, in a Republican year, she received 5,534 votes.   In 2006, a Democratic year, she received 4,955.   The lesson of Democratic turnout in the special elections in 2017 and 2018 as we approach the midterms is that Democratic turnout is double the midterm turnout of 2014, approaching presidential numbers.   If Rachel Blumenfled or Krista Griffith can get over 6,000 votes (1600 less than Hillary Clinton’s numbers in 2016), they will have a great chance at winning, so yes, this district is competitive and flippable.

Her flyers received by me so far:

Her bio: “I have always wanted to give back to my community, so I began my career as a public interest attorney. I first served as a law clerk at the Delaware Attorney General’s Office, where I worked on cases ranging from murder to juvenile offenses, as well as civil cases against Delaware agencies. I worked as a law clerk and domestic violence victims’ advocate at the Women Against Abuse Legal Center, in addition to clerking for a family judge at the Chester County Court of Common Pleas. After graduating from Villanova Law School in 2009, I opened a private practice where I helped advise many families and small businesses.

In 2012, I began my career as an educator. I am currently a public school special education teacher at Gunning Bedford Middle School. I have taught at Delaware County Community College, The Delaware Met, Kirk Middle School, and McCullough Middle School. I served on the board of The Delaware Met to assist with administering funds during its closure, and I was chosen to write Kirk Middle School’s Focus Plus plan in 2015. These experiences have allowed me to see how government policy can impact Delaware’s students directly, and have shown me both what makes our schools succeed and what we need to strengthen so that our children have access to opportunities.”

Some of her Issues that stood out to me:  Increasing education funding, not on failed programs, but after listening to the teachers about what resources they need (and are currently paying for out of their own pockets); Improving Delaware’s water infrastructure (she has shared pictures of Fairfax’s brown water on Twitter).

Her flyers received by me so far:

Her bio:  “Krista served for nearly a decade as a Deputy Attorney General in the Delaware Department of Justice under the administrations of Beau Biden and Matt Denn. As a leader, Krista prosecuted the most serious and sensitive criminal cases, developed policy and drafted legislation.  Krista spearheaded Attorney General Biden’s Senior Protection Initiative. As chief prosecutor on significant elder abuse cases, Krista also led a multi-disciplinary team of prosecutors, police, social workers and medical professionals in creating programs to protect seniors and vulnerable adults.

Krista knows first-hand the healthcare challenges confronting Delaware families. When her younger son, Nate, faced a life-threatening leukemia diagnosis, Krista left the Department of Justice in 2015. She spent months at Nate’s bedside while he underwent successful cancer treatment.  Since her son’s recovery, Krista has dedicated hundreds of hours to board leadership and community service for several nonprofit organizations including the Down Syndrome Association of Delaware, the Family Advisory Council for Nemours Center for Cancer & Blood Disorders, the Beau Biden Foundation for the Protection of Children and her sons’ schools.”

Some of her Issues that stood out to me:  Concerns over new development along Routes 41, 48 and at the DuPont Country Club, and the needed smart management of the increase in traffic congestion; Protecting seniors and the vulnerable; Healthcare

Both candidates live in Fairfax.  Both candidates make pitches that appeal to me: Rachel says the General Assembly needs more teachers among their members to better address educational issues while Krista says the General Assembly needs more advocates  (both in the legal and community organizer sense)with real world experience facing those with health crises and fighting for those with disabilities or vulnerabilities.

I am still torn.  Rachel’s strongest attribute for me is that she is a teacher.  My brother is a teacher.  I know how difficult we make their jobs and I think the General Assembly will benefit with more teachers in it.  Krista’s strongest attribute for me is her legal and advocacy background, because that is also my background.   This is a very difficult but very welcome decision to have to make.    Because I know I will be very happy with whomever wins.  Both candidates will be excellent general election candidates.  In terms of fundraising, Rachel raised $5,355.94 in 2018 and has $13,524.18 cash on hand as of her latest 30 Day Primary Report.   Krista raised $19,722.90 in 2018 and has $63,066.15 cash on hand, a figure that is bolstered by a $50,000 self loan from the candidate.   The Republican incumbent, Deborah Hudson, has $35,836.28 cash on hand as of her last 2017 annual report filed in January 2018, but she will undoubtedly raise more than that given we don’t have her 2018 fundraising numbers and won’t until 30 days before general election (something that needs to be reformed).

So these next 10 days will be informative and exciting.   Does anyone have opinions on the candidates in the 12th RD and their issues?   Please, let’s try to keep it civil, with no name calling or personal attacks against any of the candidates (and luckily there hasn’t been much of that in this race).