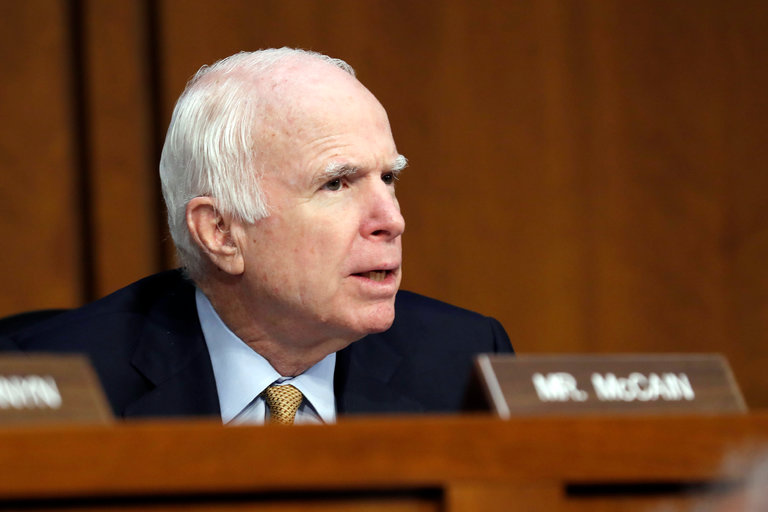 Sen. John McCain passed away after a battle with brain cancer. He was 81.  The senator passed on Saturday afternoon, according to his Senate office.  “Senator John Sidney McCain III died at 4:28pm on August 25, 2018. With the Senator when he passed were his wife Cindy and their family. At his death, he had served the United States of America faithfully for sixty years,” his office said in a statement.

BREAKING: Sen. John McCain has died. This will have consequences for the chamber he devoted much of his life to. https://t.co/qxCjb526lX

“Democratic Party officials voted Saturday to strip superdelegates of much of their power in the presidential nominating process, infuriating many traditionalists while handing a victory to the party’s left flank,” Politicoreports.

“Under the new rule, superdelegates – the members of Congress, DNC members and other top officials who made up about 15 percent of delegates that year – will not be allowed to vote on the first ballot at a contested national convention. The change could dramatically re-shape the calculous of future presidential campaigns, rendering candidates’ connections to superdelegates less significant.”

Washington Post: “The new party rules undo decades-old reforms that empowered hundreds of party activists and elected officials, often referred to as ‘superdelegates,’ whose presidential convention votes were not bound to the results of primaries or caucuses. They also affirm the decision of six states to move from caucuses, which have favored insurgent candidates, to primaries, which tend to have higher turnout.”

“The Democratic Party has begun conversations with television networks about a series of presidential primary debates in 2019,” the AP reports.  “The talks are ‘in the very early stages,’ … The early start, well before the 2020 field is known, signals the importance that the DNC chairman, Tom Perez, is placing on decisions that will be scrutinized for any signs of favoritism among potentially two dozen or more candidates.”

Marshall: "Paul Manafort must know things that could destroy Trump, members of Trump’s family or both" https://t.co/Ap9JnaC4r7 pic.twitter.com/5JuXTxBS9H

“The Paul Manafort trial set for September in Washington is expected to last three weeks and, on the basis of a list of 1,500 possible exhibits, will delve far more deeply into how he operated as a lobbyist and consultant than was done in his ­just-completed trial in Virginia,” the Washington Post reports.

“The estimated trial timeline and exhibits were included in a joint filing Friday night in federal court in Washington by Manafort’s defense and prosecutors with special counsel Robert Mueller.”

It’s Hard to Find Any Daylight Between Trump and Neo-Nazis https://t.co/lZ5yBbpjSh

“If Democrats win control of the House of Representatives in November, they will gain the most important tool available to investigate the Trump administration: subpoena power. And Democrats on the House oversight committee, that chamber’s main investigative panel, are prepared to use it,” the HuffPost reports.

“Democratic members on the committee have asked the Republican majority to issue subpoenas related to the administration’s conduct 52 times during the first 20 months of Donald Trump’s presidency. Republicans turned down each of those 52 requests. If Democrats held the committee gavel, the subpoenas would be approved.”

Cook Political Report: “Democrats remain clear but not overwhelming House favorites. On the low end, it’s possible House control may not be decided until days after the election. It’s also possible a ‘Blue Wave’ could propel Democrats to historic gains, well past the 23 they need. Right now, Democrats appear poised to gain between 20 and 40 seats, with 25 to 35 the likeliest outcome.”

The Secure Elections Act would have:

– Given security clearances to top election officials in all states
– Established a DHS channel to share information on state election security
– Ensured states conduct audits after any federal election https://t.co/vw3X8ubcbE

It also would have prefaced receipt of election funding upon having voting machines that produce paper ballot receipts or trail.

“A federal judge set back the Trump administration’s efforts to limit collective bargaining for 2.1 million federal employees and severely restrict the on-duty time union officials can spend representing employees in grievances and other issues,” the Washington Post reports.

New York Times: “The ruling, issued early Saturday, is a blow to Republican efforts to rein in public-sector labor unions, which states like Wisconsin have aggressively curtailed in recent years. In June, the Supreme Court dealt public-sector unions a major blow by ending mandatory union fees for government workers nationwide. (Federal workers were already exempt from paying such fees.)”

I know my praise of @Timodc gets him in trouble with many of his Republican friends, but those friends also support a president who’s been implicated in a felony, so screw ‘em.

This is a fantastic piece that also has some good advice for Democrats: https://t.co/qn3jI6WcDo

Adam Davidson: “There are now multiple investigations of the Trump Organization being conducted by the special counsel Robert Mueller, the New York Attorney General, The New York State Department of Taxation and Finance, the Manhattan District Attorney, the Southern District of New York, and—quite likely—other jurisdictions. President Trump is unable to stop most of these investigations. With Cohen and, now, Weisselberg providing information, it is becoming increasingly certain that the American people will—sooner or later—have a far fuller understanding of how Donald Trump conducted business. That is unlikely to go well for him.”

“A former Trump World Tower doorman who says he has knowledge of an alleged affair President Trump had with an ex-housekeeper, which resulted in a child, is now able to talk about a contract he entered with American Media Inc. that had prohibited him from discussing the matter with anyone,” CNN reports.

“The contract appears to have been signed on Nov. 15, 2015, and states that AMI has exclusive rights to Sajudin’s story but does not mention the details of the story itself beyond saying, ‘Source shall provide AMI with information regarding Donald Trump’s illegitimate child…’”

The doorman’s lawyer says he “hopes the truth will come out in the very near future.”

Trump's constant elevation of white supremacists is a more dangerous scandal than any other in his administration, @fivefifths argues: https://t.co/wRzoxDRcuo

“Like so many of President Trump’s late-night tweets, this one was inspired by a segment on his favorite cable channel, Fox News,” the New York Times reports.

“But when Mr. Trump announced Wednesday night that he was directing his secretary of state to scrutinize what he said was the targeting of white farmers for land seizures and ‘large-scale killing’ in South Africa, the president waded into a complex and politically charged debate.”

“And in doing that, he embraced a common talking point among white supremacists who claim white genocide is being perpetuated in South Africa and around the world.”

Robert Mueller and impeachment chatter is helping Democrats, not hurting them https://t.co/dIuCbeHdgk

“The subject of the pardon came up while Manafort was on trial on multiple charges of bank fraud and tax evasion, and the president was expressing his anger at how federal prosecutors had ‘beat up’ and mistreated the former Trump campaign chairman, Giuliani said. The president’s lawyers counseled him against the idea, suggesting he should wait until special counsel Robert Mueller’s investigation was concluded, and Trump agreed.”

Pakistan has called for the United States to amend what its foreign ministry described as a “factually incorrect” account of a phone call between Secretary of State Mike Pompeo and new Prime Minister Imran Khan, Reuters reports.

The State Department readout of the call said Pompeo wished Khan success and also asked Khan to take “decisive action against all terrorists operating in Pakistan.”

Said a Pakistani spokesman: “Pakistan takes exception to the factually incorrect statement issued by U.S. State Dept on today’s phone call. There was no mention at all in the conversation about terrorists operating in Pakistan. This should be immediately corrected.”

Even if individual Republicans in Congress profess a desire to hold Trump accountable, if they are supporting a Republican majority, they are by definition supporting the cover-ups. @JonathanChait writes https://t.co/dcDAFUCcWS

“The Trump administration has still not reunited over 500 migrant children with their parents after separating families at the border in recent months,” the HuffPost reports.

“In a status report, the government’s lawyers said that 528 children remained in government-contracted shelters without their parents as of Aug. 20 ― nearly a month after the court-ordered July 26 deadline to reunify separated families.”

Cavuto: “All I’m saying is you don’t prevent a constitutional crisis by threatening a financial one. Mr. President, you — your actions and words create that crisis or make people think you’re hiding the crisis, like when you say you knew nothing about payments to a stripper and a former Playboy model until you did, then explain your former lawyer Michael Cohen made those decisions until we heard on tape that you did. Just like you said you nothing about a Trump Tower meeting back in June 2016 that included your son, Donald Trump Jr., and some Russian officials. Then clarified that that meeting really wasn’t about dirt on Hillary Clinton, then it was about Russian adoptions. Then, clarified yet again that nothing came of the meeting of what you knew nothing, so there’s nothing to see here, move on. But you see, that’s the problem here. We can’t move on. Lots of stuff like that keeps popping up here.”

”Adding to the pressure, David Pecker, the chairman of American Media Inc., which publishes the National Enquirer, provided prosecutors with details about payments Mr. Cohen arranged with women who alleged sexual encounters with President Trump, including Mr. Trump’s knowledge of the deals.”

Rick Hasen: “Pecker is cooperating with prosecutors, likely to save his own skin. Will he be charged with an offense? Given his involvement as detailed in the Cohen documents, it seems like he could be charged. It may not come till after the election, but I expect a plea deal to come.”