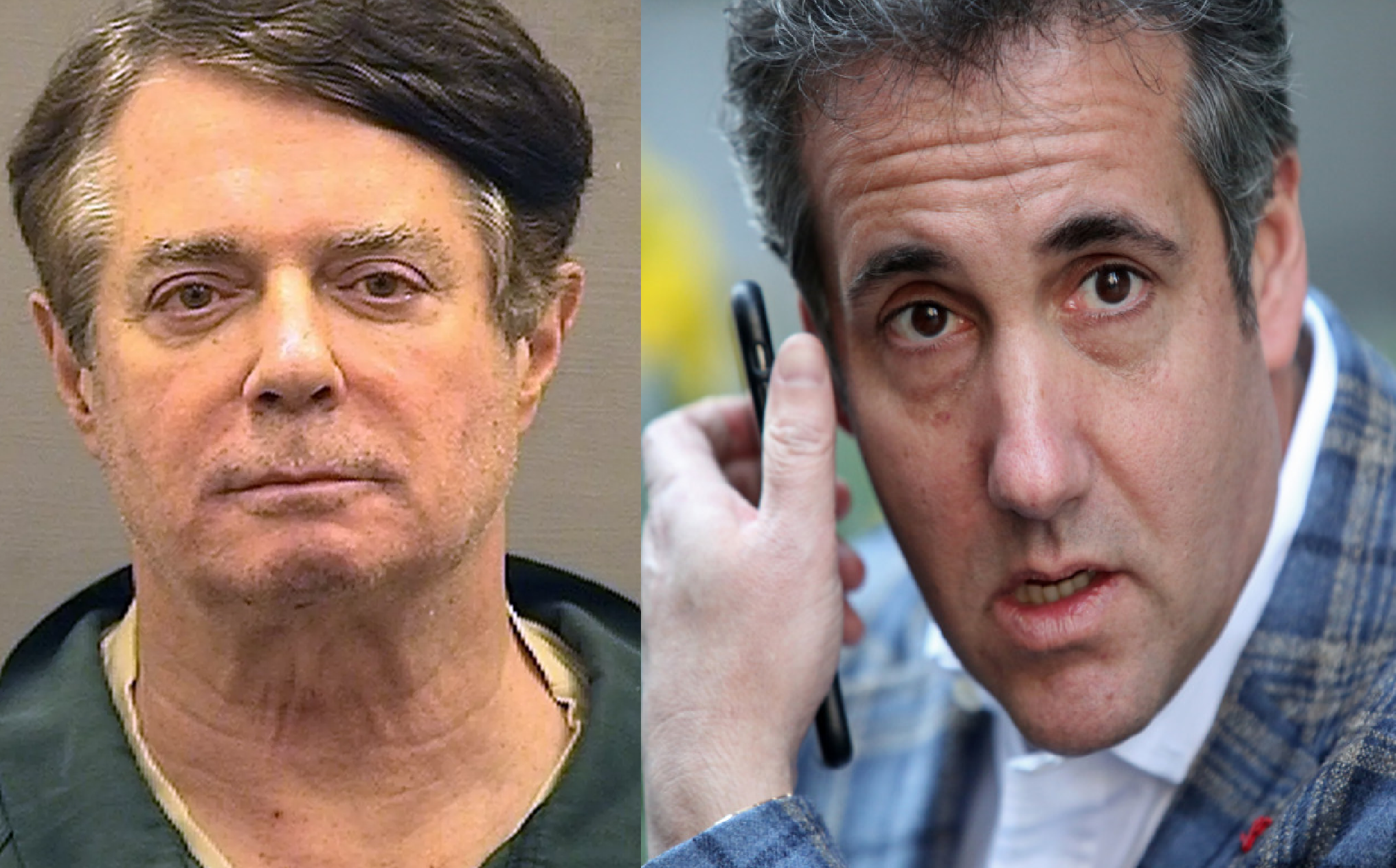 Today, former Trump Campaign Manager Paul Manafort was found guilty on eight felony counts.  “Paul Manafort, President Trump’s former campaign chairman, was convicted on Tuesday in his financial fraud trial, bringing a dramatic end to a politically charged case that riveted the capital…  Mr. Manafort was convicted of five counts of tax fraud, two counts of bank fraud and one count of failure to disclose a foreign bank account. The jury was unable to reach a verdict on 10 of the 18 counts and the judge declared a mistrial on those charges…

The trial focused on Mr. Manafort’s personal finances, in particular the tens of millions of dollars he made advising a political party in Ukraine that backed pro-Russia policies…  Mr. Manafort faces a second criminal trial next month in Washington on seven other charges brought by the special counsel, including obstruction of justice, failure to register as a foreign agent and conspiracy to launder money.”

Here are all the crimes Paul Manafort was just convicted of (and those the jury deadlocked on, and those he’s charged with in the *other* trial…) https://t.co/myKD4c6Rnv

ABC News: Michael Cohen has entered into a plea agreement with federal prosecutors in the Southern District of New York. “Given Cohen’s proximity to Trump during the past decade, including throughout his meteoric rise from mogul and reality television star to the White House, observers consider him one of most potent legal thorns to confront Trump’s presidency since he took office.”

There's a lot of jail time Michael Cohen’s trying to avoid in this plea deal. Read it and weep, here: https://t.co/Uko7sNOhyW via @voxdotcom

CNN: “As part of the plea deal under discussion, Cohen is not expected to cooperate with the government, one source said. However, by pleading guilty both Cohen and prosecutors would avoid the spectacle and uncertainty of a trial.” He pled guilty to 8 counts of campaign finance violations, tax fraud and bank fraud as part of the deal.

Michael Cohen's guilty plea could have been worse for Trump—but it's plenty bad, writes @GrahamDavidA: https://t.co/HASIzJB92G

Today he stood up and testified under oath that Donald Trump directed him to commit a crime by making payments to two women for the principal purpose of influencing an election. If those payments were a crime for Michael Cohen, then why wouldn't they be a crime for Donald Trump?

Cohen could be facing more than four years behind bars as a part of his plea deal with government prosecutors, CNN reports.  “One source told us that among the sticking points in the talks, Cohen was pressing for three years in jail while the prosecutors were seeking up to 50 months.”

Martin Longman: “The Cohen case is more immediately serious for three reasons. First, by pleading guilty Cohen has implicated the president of the United States in a conspiracy to commit federal crimes. Cohen admitted that Trump directed him to commit felonies, and in the ordinary course of things Trump would be getting indicted. These crimes are more serious than lying about a sexual dalliance with a White House intern, although I’m not quite ready to say that, on their own, they amount to a high crime. As part of a larger case arguing for removal from office, these criminal acts should play a supporting rather than a leading role.

Second, the fact that Cohen is almost certainly now cooperating makes today’s developments in his case more of an immediate threat than the Manafort convictions. Manafort may already be looking to cut a deal, but Cohen has apparently already cut one.

Third, Cohen’s information is much more likely to be lethal to Trump than Manafort’s simply because Cohen was working on a making a Trump Tower in Moscow happen throughout the fall, winter, and spring of 2015-16 and that’s likely to involve impeachable offenses. But the one thing Trump probably cannot survive even in a Republican-led Senate is confirmation that the Steele Dossier was correct about Cohen traveling to Prague. That is the most serious allegation in the entire Russia investigation.

As I’ve said many times before, if Michael Cohen went to Prague, Trump will be removed from office.”

The chairman and ranking minority member of the U.S. Senate Intelligence Committee want to make sure Michael Cohen's guilty plea doesn’t prevent him from testifying again about the pivotal Trump Tower meeting https://t.co/aKmI5CIXfK

Mike Murphy: “I think the bigger question is what happens if we lose the House — and more — in the 2018 midterms. If it does happen, such a meltdown will shake the party badly — no political party endures a major loss without repercussions — and Trump, the supreme magical winner of 2016, will become an epic party-killing loser. (My guess is Trump will compound this by attacking the party for its loss, since nothing can ever be his fault.)”

“At that point the idea of running in 2020 under Trump will look like a march to the guillotine, particularly for the GOP Senate majority. That’s when Trump will find himself on the sharp end of the same kind of cynical self-preservation thinking that he’s benefited from to date. Nobody in the family stands up to Tony Soprano until they stop making money and start going to prison. Then it’s time for change. Tony is the last to know.”

“Still, if we hang on to the House by two votes, it’ll read in the expectations bazaar as a big Trump comeback win and he’ll probably be the nominee. Then we’ll be near-certain to lose big 2020. It’ll be our McGovern ’72 and out of that rubble the 2023-4 GOP primary race will redefine the party, hopefully back to opportunity conservatism.”

Peter Brimelow, the publisher of a website that serves as a platform for white nationalism, was a guest last weekend at the home of President Trump’s top economic adviser, Larry Kudlow, the Washington Postreports.

“Brimelow, 70, was once a well-connected figure in mainstream conservative circles, writing columns for Dow Jones and National Review. But over the past two decades, he has become a zealous promoter of white-identity politics on Vdare.com, the anti-immigration website that he founded in 1999.”

Jonathan Chait: “Donald Trump ran for president as the professed candidate of ‘law and order,’ a phrase he borrowed from Richard Nixon. He successfully portrayed his opponents — not only the Democratic presidential candidate, but the entire Establishment arrayed against him — as a corrupt oligarchy enriching itself at the public expense. By now, at this probably still-early point in the Mueller investigation, we know that Trump’s campaign manager, national security adviser, and personal attorney, along with two other campaign aides, are convicted and confessed felons.”

“It is common for Trump’s opponents to retreat into cynicism about the possibility for news events to damage Trump’s standing. It is certainly true that the president has tapped into a deep vein of cultural and racial revanchism, ensuring the irrevocable loyalty of a large segment of his base. But not every Trump voter was attracted to his gross bullying racism. Some simply overlooked or accepted it in the hopes that he would put his bullying to work for them, to “drain the swamp.” That criminality has proven to pervade his inner circle is visceral evidence of a broken faith with those voters who trusted this promise.”

Rick Hasen: “For the first time since the Trump presidency began, President Donald Trump is in some real legal jeopardy, providing potential grounds for his eventual impeachment, if not indictment.”

”More importantly, assuming Cohen’s story can be corroborated with documentary evidence, the campaign finance violations could count as impeachable offenses that the House of Representatives could consider in any articles of impeachment against Trump.”

Special counsel Robert Mueller “has again delayed scheduling a sentencing hearing for former national security adviser Michael Flynn,” The Hill reports. The delay is the fourth time prosecutors have asked to delay Flynn’s sentencing as he’s been cooperating with the special counsel’s investigation.

The only reason that Trump hasn’t been indicted is that he’s the president https://t.co/63YDEUaaEp

Maggie Haberman: “Trump folks are worried about impeachment more than before. The thinking goes like this: this is something tangible, not a theoretical. And it didn’t come from Mueller. Does not mean it will happen, but this has moved to a different stage in their minds.”

The Trump administration “made public the details of its new pollution rules governing coal-burning power plants, and the fine print includes an acknowledgment that the plan would increase carbon emissions and lead to up to 1,400 premature deaths annually,” the New York Times reports.

“The proposal lays out several possible pathways that individual states might use for regulating coal-fired power plants, and what the consequences would be for pollution and human health in each case. In the scenario the E.P.A. has pegged as the most likely to occur, the health effects would be significant.”

“In that scenario, the Trump E.P.A. predicts its plan will see between 470 and 1,400 premature deaths annually by 2030 because of increased rates of microscopic airborne particulates known as PM 2.5, which are dangerous because of their link to heart and lung disease as well as their ability to trigger chronic problems like asthma and bronchitis.”

“Republicans who represented some of the safest congressional seats in their party for years are suddenly under intense pressure in 2018, with Democratic challengers threatening to overwhelm them in suburban districts where President Trump has struggled,” Politico reports.

“One of those districts belongs to Rep. Steve Chabot, an 11-term Republican who has gone years without a serious challenge in the southwestern corner of Ohio. He has been outraised — and, some Republicans say, outworked — by Democrat Aftab Pureval, the 35-year-old clerk of courts in Cincinnati’s Hamilton County, who argues that the congressman has lost touch with a diversifying, suburbanizing district changing beneath his feet.”

"Corruption" may be the distilled Democratic message for 2018 and 2020, from @elizabethforma and the rest of the party to follow: https://t.co/SqyoaRbz4m

A new Public Policy Polling survey in Maine finds that if Sen. Susan Collins (R-ME) votes for Brett Kavanaugh’s nomination to the Supreme Court, 47% of Maine voters said they would be less likely to vote for her when she runs for re-election, while 31% said they would be more likely to support her.

Key findings: 49% of Maine voters think Collins should vote against Kavanaugh and 56% don’t think she should vote on the nomination until there’s been a full review of Kavanaugh’s documents.

“The Trump administration is moving closer this week to levying tariffs on nearly half of Chinese imports despite broad opposition from U.S. business and the start of a fresh round of talks between the U.S. and China to settle the trade dispute,” the Wall Street Journal reports.

“The twin administration initiatives—pursuing tariffs on $200 billion of Chinese goods while relaunching talks to scrap tariffs—underscore a split within the U.S. administration, with negotiators in the U.S. Treasury Department offering a carrot, while the office of the U.S. trade representative threatens with a stick, both with the approval of President Trump.”

Rep. Duncan Hunter (R-CA) and wife, Margaret, “were indicted Tuesday on charges related to the misuse of $250,000 worth of campaign funds for personal expenses and the filing of false campaign finance records,” CNN reports.

“The charges of wire fraud, falsifying records, campaign finance violations and conspiracy were the culmination of a Department of Justice investigation that has stretched for more than a year, during which the Republican congressman from California has maintained his innocence.”