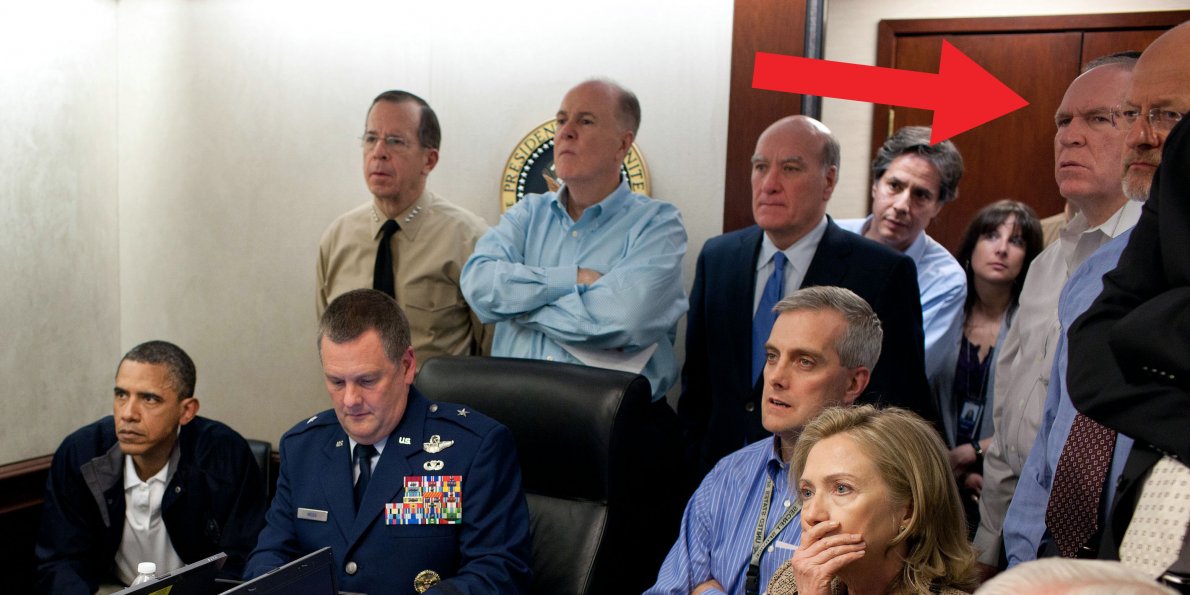 “The White House had threatened last month to strip Mr. Brennan and other Obama administration officials — including Susan Rice, the former national security adviser; and James Clapper, the former director of national intelligence — of their security clearances. At the time, Ms. Sanders said that Mr. Trump was considering doing it because ‘they politicized, and in some cases monetized, their public service and security clearances.’”

Brennan appeared last night on MSNBC, where he called Trump “dangerous to our nation.”

“This action is part of a broader effort by Mr. Trump to suppress freedom of speech and punish critics. It should gravely worry all Americans, including intelligence professionals, about the cost of speaking out. My principles are worth far more than clearances. I will not relent.”

Another key finding: “Donald Trump’s presidency makes 52% of American voters think less favorably of the Republican Party, while 16% think more favorably of the GOP and 30% say President Trump has no impact on their views.”

A new CNN poll finds that just 34% of registered voters say that Democratic House leader Nancy Pelosi will be “an extremely or very important” factor in their vote this fall.

That ranks dead last of the 10 factors asked in the survey.

Trump’s former butler, who served him for 20 years, is a loud, virulent racist. What are chances he didn’t swap racist jokes with the boss? Infinitesimal. https://t.co/y8B1cO8V4v

Penn Jillette told Vanity Fair that he personally heard Donald Trump make racist remarks on the set of the Apprentice. He wouldn’t, however, quote exactly what he heard Trump say.

Said Jillette: “If Donald Trump had not become president, I would tell you all the stories. But the stakes are now high and I am an unreliable narrator… I can emotionally tell you things that happened racially, sexually, and that showed stupidity and lack of compassion when I was in the room with Donald Trump and I guarantee you that I will get details wrong.”

Jillette did go ahead and characterize some of the things he heard Trump say, including crude small talk in which the then Apprentice host would turn to a cast member and ask “if he’d rather have sex with this woman or that woman.”

“FBI agents in California and Washington, D.C., have investigated a series of cyberattacks over the past year that targeted a Democratic opponent of Rep. Dana Rohrabacher (R-CA),” Rolling Stone reports.

“Rohrabacher is a 15-term incumbent who is widely seen as the most pro-Russia and pro-Putin member of Congress and is a staunch supporter of President Trump.”

“Cybersecurity experts say that it’s nearly impossible to identify who was behind the hacks without the help of law enforcement or high-priced private cybersecurity firms that collect their own threat data. These experts speculate that the hackers could have been one of many actors: a nation-state (such as Russia), organized crime, so-called e-crime or a hacktivist with a specific agenda.”

Internal documents obtained by CNN show that Rep. Nancy Pelosi (D-CA) “remains a fundraising juggernaut for House Democrats as they battle to pick up the 23 seats they need to retake the House majority for the first time since the GOP won control of the chamber in the 2010 midterms.”

“Through June, Pelosi had raised an eye-popping $83 million for the Democratic Congressional Campaign Committee for the 2018 election cycle, more than double the next closest Democrat, according to an internal list for the group charged with electing more Democrats to the US House of Representatives. A source briefed on the matter said that through July she had raised nearly $91 million for the party committee, which is spending big in hotly contested races including where Democratic candidates are running away from Pelosi.”

Dems should run on Elizabeth Warren's new proposal to reform corporate governance, and contrast it with Trump/GOP tax cuts for corporations and gutting of Wall Street accountability, argues @paulwaldman1: https://t.co/9c9iB3TmAc

Zach Beauchamp: “I reported from the ‘Unite the Right 2’ rally in Washington on Sunday. It was a dreary failure that attracted around 30 people in total and literally ended before it was supposed to start…”

“But as pathetic as of all that was, none of it was quite as hilariously humiliating to the alt-right as the video below — in which the rally’s organizer, Jason Kessler, is yelled at by his father to get out of his parents’ room in the middle of a live stream with a fellow alt-righter.”

“Keep your friends close and your enemies closer. And, perhaps, your potential leakers closer yet,” the APreports.

“President Trump’s political operation has made a regular practice of providing soft landing-pads for discarded staffers, offering nebulous jobs at big salaries to aides who have been pushed out of his West Wing.”

“The all-in the-family approach to taking care of stalwarts is nothing new. But the systematic approach with which Trump White House veterans have been offered plush gigs is. According to aides, it reflects a reality that for some the lucrative private sector jobs that are typically available to exiting White House officials never materialized, while for others, it serves as a way keep them nearby and quiet.”

Something doesn't have to result in a mass GOP defection from Trump to be a big fucking deal, and an n-word tape would be just that. https://t.co/6BovBagZNM

Jonathan Last: “The Trump presidency is oddly dependent on tapes. Trump’s entire existence is so strange and outside the norms of decent behavior that many of his foibles simply cannot be believed, absent hard evidence. Who would believe that Donald Trump would call reporters pretending to be a publicist in order to brag about himself? If you didn’t have the tapes, no one would. Who would believe that Trump would admit—almost to a total stranger, while wearing a microphone—to grabbing women by their genitals and forcing them to do whatever he wanted? Without the tapes, no one would. People have speculated for almost two years about a Russian pee tape that almost certainly doesn’t exist. And everyone will continue to view it as a fantasy. Unless it surfaces. At which point we will all shake our heads and say, ‘Actually, we should have known…’”

“The other factor in why you need documentary materials is that the president, his advisers, and his supporters in the media use gaslighting as their primary means of defense. They make frictionless transitions from ‘no one ever met with Russians,’ to ‘the meeting with Russians was about adoption,’ to ‘of course they met with Russians about getting oppo on the Clintons and why do you have have a problem with that?’”

“Without tapes, or emails, or hard evidence, Trump World simply denies everything as a matter of course.”

Be afraid. Be very afraid.https://t.co/AT40TNOoc0

“Both states showed dramatic increases in participation as voters picked candidates for Congress, Senate and governor, with Minnesota’s turnout surpassing a two-decade high and Wisconsin’s hitting levels not seen for a state primary since at least 2002.”

Matt Lewis: “I grew up with (and signed on for) Reagan’s version of conservatism. In recent years, I have become disenchanted—not with the intellectual philosophy of Edmund Burke or the governing philosophy of Ronald Reagan—but with what passes for conservatism today.”

“The 1980s, for a set of historical reasons, was a time when conservatism had real intellectual credibility. Not only was Reagan a decent man, his conservatism was (without having to market it as such) compassionate. I thought this was a culmination, that conservatism had outgrown the earlier extremism and kookiness that existed before I came of age. But what if it was an aberration?”

“If I were coming of age today and my example for conservatism was based on Donald Trump, Laura Ingraham, and Sean Hannity, would I sign up? I can’t imagine that I would join that cause. Should this trend continue, it’s going to be increasingly hard for Republicans to attract thoughtful, compassionate, and even sane supporters. If that happens, not only will the GOP become progressively whiter, older, more rural, and more male, it will also become…weirder.”

Special counsel Robert Mueller “doesn’t have to shut down his Russia investigation in the weeks before November’s congressional elections despite claims by President Trump’s lawyers that he faces a September 1 deadline, according to current and former U.S. officials,” Bloomberg reports.

“Mueller can continue his closed-door inquiries, and even issue new indictments up to and after the November 6 voting, without violating a Justice Department policy against actions intended ‘for the purpose of affecting any election,’ they said, asking not to be identified discussing investigative matters.”

“That’s at odds with repeated assertions by Trump’s lawyers.”

“Republicans are relieved that state Sen. Troy Balderson appears to have eked out a win in Ohio’s 12th CD special election last week. But a new round of polls shows several more GOP incumbents, including Reps. Mimi Walters (CA-45) and Tom MacArthur (NJ-03) highly vulnerable. Their seats, along with Rep. Robert Pittenger’s open NC-09, move from Lean Republican to the Toss Up column.”

Cook Political Report: “A week after the polls closed, Republican Gov. Jeff Colyer conceded the primary to Secretary of State Kris Kobach. While Kobach’s lead over Colyer dwindled to less than 100 votes two days after the primary, Kobach pulled ahead once county officials started counting provisional ballots. By the end of the day on August 14, Kobach’s lead had expanded to 345 votes. But, Kobach’s victory isn’t necessarily good news as most GOP strategists consider him to be a flawed nominee. As a result, the race moves to the Toss Up.”

Here's how rich people are manipulating retirement plans to milk the Trump Tax Cuts for all they’re worth (and then a little extra) https://t.co/zYVnNptse6

President Trump blasted his oldest son as a “fuck up” after learning he had released emails about a controversial Trump Tower meeting attended by a Kremlin-connected lawyer who had promised dirt on Hillary Clinton, according to Omarosa Manigault Newman’s forthcoming book, the New York Daily Newsreports.

Said Trump: “He is such a fuck up. He screwed up again, but this time, he’s screwing us all, big-time!”