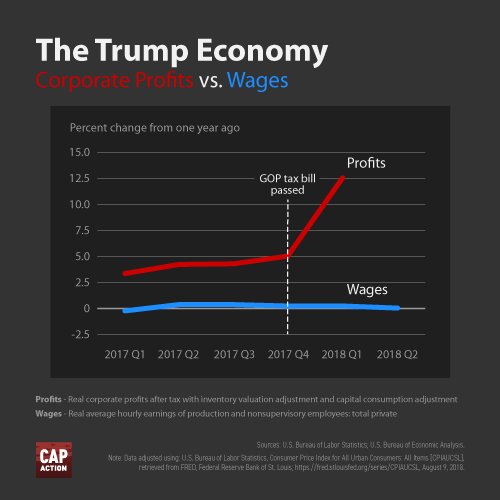 Two charts went into circulation this past week and both tell the tale of how American workers have been left behind as a matter of policy for decades. The first two charts make it really clear that while workers wages have been relatively flat for decades, corporate profits have taken off. That is because — as a matter of policy — governments have actively sided with corporations in suppressing wages. Between corporate tax cuts, artificially low minimum wages, the undermining of unions and other anti-worker actions workers are mainly no longer in a position to participate in all of the productivity they produce.
Take a look:

Then there’s this from the FT:

Huge majorities of Americans rightly see the tax cuts as a scam. Most saw little benefit and when April 15 rolls around next year, many will find themselves owing the IRS for the first time.

So my fellow Democrats — here are the visual aids you have been waiting for. Let’s talk about this AND talk about specific policy that makes sure that working and middle class people get a fair shake in this economy.

3 comments on “Dear Democrats: We Have Charts! Charts That Demonstrate the Scam of the Tax Cuts for the Wealthy”