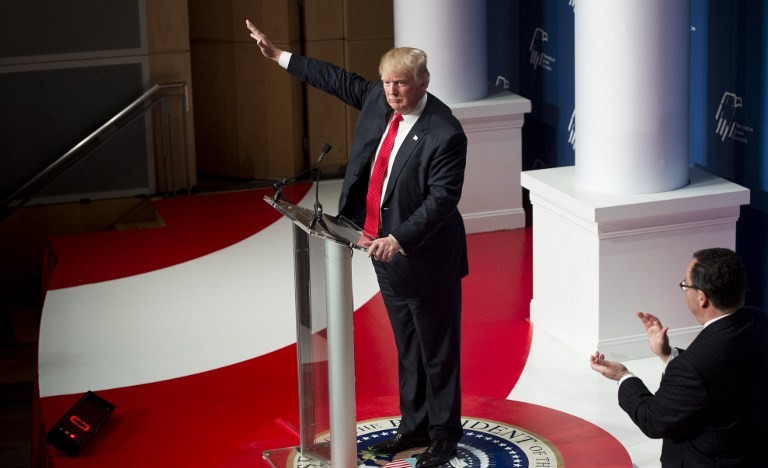 “As white nationalists planned to gather in front of the White House on Sunday to mark the anniversary of last year’s violent rally in Charlottesville, Va., President Trump denounced ‘all types of racism,’ but did not specifically condemn the supremacists,” the New York Times reports.

“Mr. Trump’s general call for unity, as Washington braced for the possibility of violence between the white nationalists and counterdemonstrators, echoed his reluctance a year ago after the deadly Charlottesville rally to single out the supremacists for condemnation.”

Rep. Tom Garrett (R-VA) told CNN that he was told during a briefing with the FBI director that Russian meddling played in a role in “fomenting the flames of what happened in Charlottesville” one year ago, when a white nationalist rally turned violent.

Said Garrett: “I sat in a closed session briefing probably two months ago about Charlottesville with the director of the FBI, amongst others, and asked if Russian inter-meddling had to do with fomenting the flames of what happened in Charlottesville. I was told yes, it did.”

Politico: “Trump’s respite has provided him hours of downtime, with aides sprinkling his comparatively sparse schedule with meetings and phone calls as he prepares to stump all fall for Republican candidates. He’s spent long stretches in high spirits, according to several accounts, gloating about the economy and gross domestic product, and riding high following recent ballot-box victories.”

“But Trump has found time to rage about the Russia investigation led by Robert Mueller and what he views as the unfair treatment of his former campaign chairman Paul Manafort, who is on trial in Virginia on charges of tax and bank fraud. Trump’s mood has darkened during periods when the Russia story has dominated”

Said one close adviser: “Every day you wake up and it’s Manafort this, Manafort that. It’s crazy. How do you get away from it?”

Kansas Gov. Jeff Colyer (R) accused Secretary of State Kris Kobach (R) of intentionally pushing a miscount of the number of ballots cast in the gubernatorial primary race in an interview with Fox News.

Said Colyer: “Secretary Kobach’s office was instructing counties not to count ballots that are in the mail, and those clearly have to be counted under Kansas law.”

Rep. Chris Collins (R-NY), one of President Trump’s earliest backers in Congress, suspended his campaign on Saturday, in the wake of insider trading allegations that resulted in his dramatic arrest this week, CNBCreports.

Roll Call: “Removing Collins’ name from the ballot would be extremely difficult under New York State law. According to a spokesman for the state Board of Elections, the three avenues to remove one’s name from the ballot is if the candidate dies; does not meet the basic requirements for candidacy like minimum age and residency in the state; or runs for another office and declines the nomination for the first office that candidate was seeking.”

Politico: “Under New York law, Collins’ name can be supplanted on the ballot at this stage of the cycle only if he dies, moves out of state or is nominated for another office — like a local judgeship. According to Erie County GOP Chairman Nick Langworthy, the exact mechanisms are still being worked out, but he noted Collins owns houses in Florida and Washington, D.C.”

Florida state House candidate Melissa Howard (R) “lied about having a college degree and posed with a fake diploma after a news outlet questioned her credentials,” WPLG reports.

Howard had claimed she graduated with a bachelor’s degree from Miami University in Ohio. But “a bombshell email sent to the Sarasota Herald-Tribune from Miami University general counsel Robin Parker declares unequivocally that Howard never graduated. And Parker also takes aim at the diploma seen in the pictures, laying out a series of reasons why it does not appear to be authentic.”

North Carolina congressional candidate Mark Harris (R) said in a 2015 speech that the United States had descended into “moral decay” and cited as one of several examples that “we have watched in one generation where homosexuality was once criminalized to now we see the criminalization of Christianity,” according to video found by Media Matters

“Democrats have all but acknowledged that they are unable to stop the Senate from confirming Trump nominee Brett Kavanaugh for the Supreme Court this fall,” the Washington Post reports.

“Moderate Republican senators such as Susan Collins of Maine, the most closely watched GOP swing vote, are sending strong signals that they will back Kavanaugh. Several Democrats facing difficult reelections this year have indicated they are open to voting for the judge. And leaders of the resistance are already delivering post-mortem assessments and blaming fellow Democrats for a looming failure.”

The Boston Globe is proposing a coordinated editorial response from publications across the U.S. on August 16th to President Trump’s frequent attacks on the news media, the AP reports.

About 70 outlets had committed to editorials denouncing what the Globe called a “dirty war against the free press,” with the list expected to grow.

“Puerto Rico has conceded that Hurricane Maria killed more than 1,400 people on the island last year and not just the 64 in the official death toll,” the AP reports.

“The government acknowledged the higher death toll with no fanfare in a report submitted to Congress this week in which it detailed a $139 billion reconstruction plan for the island.”

Republicans and affiliated outside groups have now spent about $41.7 million on special elections this cycle as compared to just $12.3 million for the Democrats.

First Read: “That’s more than a 3-1 ratio. And it shows just how much Republican outside groups were propping up their candidates in these specials, and how untenable that model will be for November.”

Surveys show that the Trump Administration’s policy of separating families at the border has been very unpopular, with an average of 64% of registered voters opposing the policy. But sometimes asking people whether they “support” or “oppose” a policy doesn’t fully capture how they feel, so instead, Cornell’s Center for the Study of Inequality asked a national sample of 1,379 likely voters the following: “What is the first word that comes to mind when you [read/hear] the following information from the U.S. Department of Homeland Security: In recent months the U.S. Government has placed many young children into custody after separating them from their migrant parents at the border.”

The word cloud above summarizes the intense reactions likely voters had to separating migrant families. The larger the word, the more often it was said by our respondents: fully 24% of our sample said the first word that came to their mind was “sad” (108 respondents), “horrible” (75), “wrong” (72), or “disgusting” (71).

James Hohmann: “Democrats see an opportunity to revive the ‘culture of corruption’ message that helped them win the House in 2006. Nancy Pelosi repeated almost the identical talking points on Wednesday that she used 12 years ago to link GOP candidates to Duke Cunningham, Jack Abramoff and Mark Foley.”

Said Pelosi: “The charges against Congressman Collins show the rampant culture of corruption and self-enrichment among Republicans in Washington today. The American people deserve better than the GOP’s corruption, cronyism and incompetence.”

Pew Research: “In March, 82% of those who reported voting for Trump – and whom researchers were able to verify through voting records as having voted in 2016 – said they felt ‘warmly’ toward Trump, with 62% saying they had ‘very warm’ feelings toward him. Their feelings were expressed on a 0-100 ‘feeling thermometer.’ A rating of 51 or higher is ‘warm,’ with 76 or higher indicating ‘very warm’ feelings.”

“The views of these same Trump voters had been quite similar in November 2016: At that time, 87% had warm feelings toward him, including 63% who had very warm feelings.”

Nate Cohn: How well do you understand the Trump coalition?

Key finding: “While Virginians do not register by party, the survey found that a third of self-described Republicans or Republican-leaning voters were not yet backing Stewart — with 20% undecided, 10% supporting Waters and 3% backing Kaine.”

Steve West (R), who is running for the Missouri state House, has a history of making anti-Semitic, racist and homophobic comments online, including saying “Hitler was right” about who was “behind” the events taking place in Germany before World War II, the Kansas City Star reports.

Said West: “Looking back in history, unfortunately, Hitler was right about what was taking place in Germany. And who was behind it.”

Another comment: “Jewish people can be beautiful people, but there’s ideologies associated with that that I don’t agree with. Jews today are a remnant of the tribe of Judah that rejected Christ.”

Michael Gerson: “In November, many Republican leaners and independents will face a difficult decision. The national Democratic Party under Nancy Pelosi and Charles Schumer doesn’t share their views or values. But President Trump is a rolling disaster of mendacity, corruption and prejudice. What should they do?”

“They should vote Democratic in their House race, no matter who the Democrats put forward. And they should vote Republican in Senate races with mainstream candidates (unlike, say, Corey Stewart in Virginia).”

“The only way to save the GOP is to defeat it in the House. In this case, a Republican vote for a Democratic representative will be an act of conscience.”

Washington Post: “Unlike most states, Vermont has no age requirement for gubernatorial candidates, only a residency requirement. Sonneborn, who has lived in Bristol for 14 years — his entire life — makes the cut.”

“With all those hurdles cleared, could Sonneborn… actually win the Democratic nomination on Aug. 14? Probably not. Age aside, he is hamstrung by very low name recognition, a problem that his adult Democratic opponents face as well. But hey, nobody thought a 14-year-old would actually run, let alone land himself on the ballot, let alone participate — and hold his own — against his adult competitors in several candidate forums.”

Wall Street Journal: “Democrats running for Congress in 2018 are pushing a muscular gun-control agenda that represents a wholesale repositioning on the hot-button issue. In this year’s midterm election, gun control has become a party litmus test from which few dissent, alongside abortion rights and support for same-sex marriage.”

“Six years ago, when the Democratic Congressional Campaign Committee advised candidates in rural districts to show themselves with guns in their TV ads, the National Rifle Association made campaign contributions to 30 Democratic House candidates. This year, the NRA is financially backing just three.”

Rep. Scott Taylor (R-VA) said that “he had severed ties with his campaign consultant after learning about allegations of forged signatures in petitions gathered by his campaign staff,” the Richmond Times Dispatchreports.

“A special prosecutor was assigned to investigate petitions gathered by Taylor’s staff to help get an independent candidate on the November ballot.”

Said Taylor: “My campaign has a zero-tolerance policy for inappropriate activities. Recently we became aware of the inconsistencies in a voter petition process along with everyone else. Previously, our team terminated the relationship with our campaign manager for separate issues, however, current knowledge underscores that decision and prompted me to sever ties with my campaign consultant.”