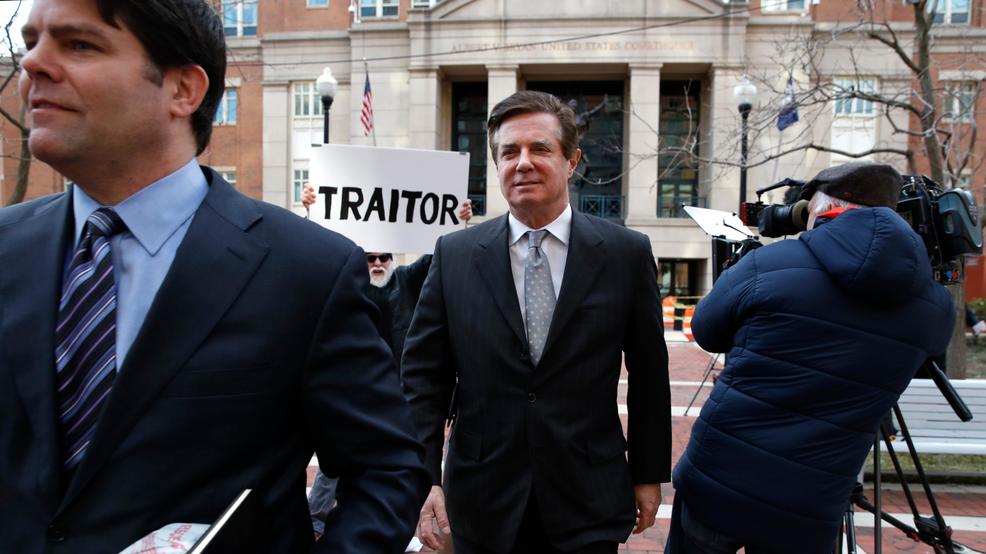 Associated Press: “The trial, scheduled to begin [today] with jury selection in Alexandria, Virginia, will give the public its most detailed glimpse of evidence Mueller’s team has spent the year accumulating. It will feature testimony about the business dealings and foreign ties of a defendant Trump entrusted to run his campaign during a critical stretch in 2016, including during the Republican convention. And it will unfold at a delicate time for the president as Mueller’s team presses for an interview and as Trump escalates his attacks on an investigation he calls a ‘witch hunt.’”

“Adding to the intrigue is the expected spectacle of Manafort’s deputy, Rick Gates, testifying against him after cutting a plea deal with prosecutors, and the speculation that Manafort, who faces charges in two different courts and decades in prison if convicted, may be holding out for a pardon from Trump.”

Washington Post: The spectacular rise and fall of Paul Manafort.

The Russian government sold the vast majority of its holdings of U.S. Treasury securities from March to May, in a dramatic move that experts tell the Daily Mail is unprecedented.

The Treasury revealed this info two days after the Helsinki summit. https://t.co/HEwd9lTJIS

“The Russian government has sold off the vast majority of its holdings of U.S. Treasury securities for reasons that remain mysterious, in a dramatic move that experts are calling unprecedented,” the Daily Mail reports.

“A U.S. Treasury report released on July 18 shows that Russian holdings of Treasury securities declined by 84% between March and May, down to just $14.9 billion from March holdings of $96.1 billion.”

First Read: “Two things can be true: More Republican voters than ever approve of Trump’s job performance, according to the latest NBC/WSJ poll. And on a variety of issues — tariffs, immigration, Trump’s dealings with Russia — we are seeing Republican lawmakers breaking from the president on key policies and issues. And that’s no small thing.”

“Of course, in the summer and fall of 2016, Republicans were busy distancing themselves from Trump (over the ‘Access Hollywood’ video, the attacks on the Khan family, the attacks on Judge Curiel). And it all worked out for Trump and the GOP.”

“But you always want to be more unified — rather than less unified — heading into an election.”

“For years, presidential campaigns followed relatively predictable lines of trench warfare, with the outcome decided in a handful of battleground states. But the era of the hardened electoral map — 40 of 50 states voted for the same party from 2000 to 2012 — may be coming to an end,” Politico reports.

“Interviews with more than two dozen politicians, consultants and activists throughout the country suggest that between Donald Trump’s sweep through the upper Midwest and the demographic shifts powering Democrats in the South and West, the field of competitive states stands to be dramatically reshaped in 2020.”

As the battleground map comes into focus, it’s becoming increasingly clear that some developments of the last few years have taken a big toll on the GOP structural advantage. https://t.co/NFoXedooP0

Nate Cohn: “The battleground in the fight for control of the House is starting to come into focus with 99 days to go until the November election. It’s not exactly the battleground that analysts expected.”

“The broader battleground is a positive development for Democrats. It’s a reflection of how much the Republican structural advantage in the House has eroded over the last year. What remains of it isn’t helping the Republicans as much as analysts assumed it would, at least not yet.”

So much criticism of liberal policymaking is dressed up as a preference for "equality of opportunity" vs. "equality of outcomes." But as @mattyglesias shows here, that falls apart when you begin looking at the actual ideas. https://t.co/OiMOSTauYo

The complaint says GOP consulting firm OnMessage “set up a shell corporation called Starboard. The corporation was located at the same site as OnMessage and was virtually indistinguishable from its parent firm. Starboard’s apparent purpose was to help the NRA evade FEC rules.”

“As a result, the NRA may have made millions in illegal and excessive in-kind contributions.”

“Democrats preparing presidential runs in 2020 are waging aggressive fundraising campaigns this year, meeting with wealthy donors over private meals and spending millions of dollars to build up their online donor networks,” the Washington Post reports.

“The early jockeying reflects concern that the sheer number of interested candidates will create a fundraising bottleneck in early 2019, possibly narrowing the field before the first debate for those candidates who can’t raise enough money to continue.”

“More than two dozen people are in the process of exploring campaigns to take out President Trump, but only a handful have the relationships with wealthy donors, significant personal wealth or small-dollar fundraising apparatus to raise the early money needed to mount a traditional campaign. The early advantage goes to those who hail from wealthy states, with broad networks of donors, such as California and New York, and those who will start the race with a national brand and large email lists of supporters.”

Trump's latest rage-tweets about Mueller and his wall are a reminder:

This election is going to be about Trump's bigotry and authoritarianism.

A new analysis shows House map includes many pro-Trump districts. So juicing Trump base will be key.

Columbus Dispatch: “The Congressional Leadership Fund is among a half-a-dozen independent organizations spending hundreds of thousands of dollars each in what many political observers originally expected to be a ho-hum contest in a decidedly Republican district.”

“With growing signs that the race is close, money raised outside the 12th District is suddenly showing up inside the district.”

Facing down the new Reactionary International: The ties between #Putin and elements of the right — #Trump, the gun lobby and religious traditionalists — should give pause to all conservatives whose first commitment is to democratic values.
My columnhttps://t.co/wJY4ABOnKk

Steve Bannon “tore into the powerful Koch political network Sunday, accusing it of undermining President Trump ahead of a midterm election that threatens to derail his presidency,” Politico reports.  Said Bannon: “What they have to do is shut up and get with the program, OK? And here’s the program: Ground game to support Trump’s presidency and program, and victory on Nov. 6.”

The government is secretly monitoring ordinary US citizens when they fly https://t.co/rSRfuhhXnc

Politico: “A year into the job, Kelly’s attempts to implement traditional processes in an untraditional White House have failed, according to a dozen people in and outside the administration — though virtually all concede the West Wing runs better than it used to. Kelly’s allies say he took the job out of a sense of duty, and he has suggested he doesn’t enjoy it much. … Early mornings in the office have been supplanted by sweat sessions at the gym.”

“Many of Trump’s friends and advisers have concluded the president doesn’t really want a chief of staff — and he has several confidants urging him to operate without one. But for this president, keeping Kelly around offers the best of both worlds: somebody to blame when things go awry but nobody fettering his freedom of action.”

Why are so many leftists skeptical of the Mueller investigation? https://t.co/GusLEbBylC pic.twitter.com/nIaqHrB7YQ

“Some of the biggest winners from President Trump’s new tax law are corporate executives who have reaped gains as their companies buy back a record amount of stock, a practice that rewards shareholders by boosting the value of existing shares,” Politico reports.

“A Politico review of data disclosed in SEC filings shows the executives, who often receive most of their compensation in stock, have been profiting handsomely by selling shares since Trump signed the law on Dec. 22 and slashed corporate tax rates to 21 percent. That trend is likely to increase as Wall Street analysts expect buyback activity to accelerate in the coming weeks.”

Hackers probed 21 state systems during the lead-up to the 2016 election and gained access to one. But the federal government and states don’t appear to have made great strides to ensure that this doesn’t happen again. https://t.co/gLzYh0sOQ3

Speaking in New York on Sunday, Supreme Court Justice Ruth Bader Ginsburg gave herself “at least five more years” on the bench, according to a CNN report.  “I’m now 85. My senior colleague, Justice John Paul Stevens, he stepped down when he was 90, so think I have about at least five more years,” she said in remarks made after a production of “The Originalist,” a play about her late friend and colleague Antonin Scalia.  She has reportedly already hired a full slate of law clerks to last her through 2020.

She added that her optimism about America’s fate comes from her late husband, Marty.

“My dear spouse would say that the true symbol of the United States is not the bald eagle—it is the pendulum,” Ginsburg said. “And when it goes very far in one direction you can count on its swinging back.”

So, that makes 2020 the most important election in all history of sentient intelligent life in this galaxy.  If a leftist or a liberal stays home or does not vote Democratic in 2020, they should be exiled to Rigel VII.   Or launched into the sun.

Why is President Trump so interested in providing his foes in the FBI with cushier headquarters? One theory is that the building mars the view from the Trump International Hotel https://t.co/zpFIfwSpzl