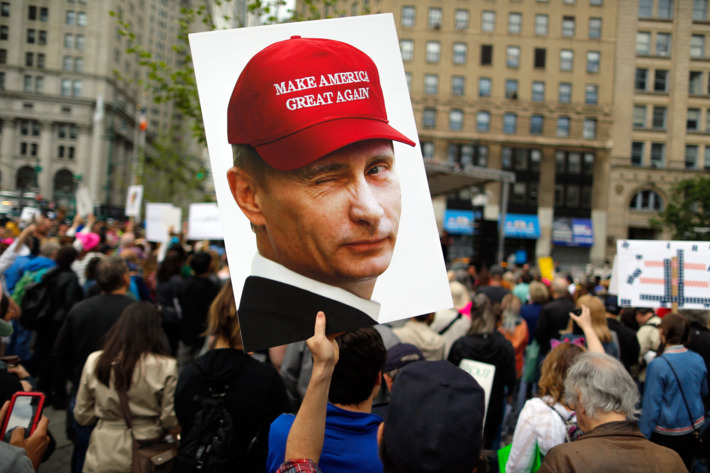 “President Trump’s longtime lawyer, Michael D. Cohen, secretly recorded a conversation with Mr. Trump two months before the presidential election in which they discussed payments to a former Playboy model who said she had an affair with Mr. Trump,” the New York Times reports.  “The F.B.I. seized the recording this year during a raid on Mr. Cohen’s office.”

”The recording’s existence further draws Mr. Trump into questions about tactics he and his associates used to keep aspects of his personal and business life a secret. And it highlights the potential legal and political danger that Mr. Cohen represents to Mr. Trump.”

Playbook: “We have had a lot of unconventional weeks since Donald Trump took office in January 2017. But we are closing what might be one of the most humiliating weeks in Trump’s presidency — one that left his supporters cringing and worried for the future of the country.”

New York Times: “President Trump’s disastrous performance since his news conference alongside Russian counterpart Vladimir Putin has sent West Wing morale to its lowest level since the Charlottesville fiasco almost a year ago.”

“‘People are just depressed,’ said one Republican close to the White House. ‘Nobody wants to take on the public heat of resigning right now, but there are a bunch of people who were thinking maybe they’d leave after the midterms who are very seriously starting to consider accelerating their timetable.’”

The Hill: “Rank-and-file intelligence and national security officials feel demoralized by the president’s failure to publicly call out Putin for interfering in the 2016 election, according to sources inside and outside the federal government.”

“I think what’s important about that conversation is, it’s not that one side is right and one side is wrong,” said Homeland Security secretary Kirstjen Nielsen about Charlottesville https://t.co/O9FqUfdIc6

Politico: “Mitch McConnell has a warning for Democrats demanding copious documents on Supreme Court nominee Brett Kavanaugh: Be careful what you wish for. The Senate majority leader privately told senior Republicans on Wednesday that if Democrats keep pushing for access to upwards of a million pages in records from President Donald Trump’s high court pick, he’s prepared to let Kavanaugh’s confirmation vote slip until just before November’s midterm elections, according to multiple sources.

“Delaying the vote past September would serve a dual purpose for McConnell, keeping vulnerable red-state Democrats off the campaign trail while potentially forcing anti-Kavanaugh liberals to swallow a demoralizing defeat just ahead of the midterms. Senators said McConnell believes the Democratic base will be ‘deflated’ if they raise hopes of defeating Kavanaugh only to lose just days before the election.

Playbook: “The Washington parlor game about when John Kelly will actually leave the White House could not be more irrelevant. He’s already gone. Whether he has a hard pass or not is irrelevant. The president equated Putin’s word to the word of his director of national intelligence. He met with Putin with no one besides an interpreter. He allowed his press secretary to go out in public and leave open the possibility that they might ship a former U.S. ambassador to Moscow back into the arms of Mother Russia. Clearly the chief of staff has no ability to rein in his boss or effectively manage up.”

Rep. Will Hurd (R-TX), a former CIA officer, writes in the New York Times that he has seen Russian intelligence agents “manipulate many people. I never thought I would see the day when an American president would be one of them.”

New York Times: “But intentionally or not, Mr. Trump was set on testing the limits of his ability to move on without consequences.”

“He took the extraordinary and risky move of inviting Mr. Putin to Washington. Discussions for a meeting in the fall were already underway, Sarah Huckabee Sanders, the White House press secretary, said on Twitter.”

”Mr. Trump was deploying a familiar tactic: barreling into the next news cycle by supplying the next bit of incendiary programming.”

“When he announced his retirement in April, House Speaker Paul D. Ryan pledged to ‘run through the tape’ and remain in his post through the midterm elections,” the Washington Post reports.

“Three months later, that sprint looks more like a slog: President Trump continues to upend the GOP on a near-daily basis, while both conservative and moderate lawmakers have caused Ryan headaches as new legislative and political pitfalls loom.”

“Still, Ryan has defied GOP colleagues who predicted it would be impossible for a lame-duck speaker to remain in power for months with control of the House on the line in November.”

Only 364 of more than 2,500 migrant children separated from their parents at the U.S. border with Mexico have been reunited—just one week away from a court-ordered deadline, NBC News reports.

A lot more progressive candidates are running and winning in Democratic primaries in 2018 than we’ve seen in a long timehttps://t.co/W2EM1VUrcm pic.twitter.com/toSeedN1BZ

Blake Hounshell: “When I wrote, back in February, that I was skeptical that President Donald Trump would ever be proved to have secretly colluded with Russia to sway the 2016 election in his favor, I mistyped.”

“What I meant to write was that I wasn’t skeptical.”

”Last week’s events have nullified my previous skepticism… With every other world leader, the physically imposing Trump attempts to dominate—witness his alpha-male handshakes with French President Emanuel Macron or his flamboyant man-spreading next to German Chancellor Angela Merkel. Yet with the diminutive Putin—who is maybe 5 feet, 6 inches tall—he’s oddly submissive. During the public portion of their encounter, Trump was slumping in his chair, as if defeated. Why? Why did he insist on a one-on-one meeting with Putin in the first place?”

President Trump told CNBC that he’s ready to escalate the U.S.-China trade war and put tariffs on every Chinese good imported to the U.S. — worth $505.5 billion.

Axios: “Trump’s tariffs are introducing a new, wildly unpredictable issue into the midterm elections, thanks to their heavy impact on states with critical Senate races as well as their likely role in House races across the country.”

This is sickening. These Trumpsters are traitors—and proud of it. They MUST be stopped in November and in 2020. https://t.co/0iuqQXTsUd

“U.S. officials are meeting with former Taliban members amid intensifying efforts to wind down America’s longest war,” three of the militant group’s commanders told NBC News.  “The talks have occurred in Afghanistan, Qatar and the United Arab Emirates, according to the Taliban sources.”

This is actually good news.

President Trump’s advisers “were in an uproar” over Director of National Intelligence Dan Coats’s interview in with Andrea Mithcell, the Washington Post reports.  “They said the optics were especially damaging, noting that at moments Coats appeared to be laughing at the president, playing to his audience of the intellectual elite.”

Vanity Fair: “As the post-summit fallout continues, however, these foot soldiers of the deep state are coming to a chilling realization: nobody has any control over Trump—including Trump himself. For the legion of national-security, diplomatic, and military officials trying to smile while white-knuckling through the Trump presidency, Helsinki was a wake-up call. As a current administration official explained, Trump seems to believe that he alone can sit down with dictators and strongmen like Putin and Kim Jong Un to remake the world order—and experts and advisers will only slow him down.”

Said one administration official: “I don’t know anyone who thought the summit was a good idea ahead of time. There is a reason why we tried to slow-roll/kill this idea… The president might think it’s us being ‘deep-staters,’ but the reality is we were trying to protect him. It was a bad idea from all sides: policy and politics.”

Is the entire Republican Party on is way to becoming a Russian asset? @paulwaldman1 amasses the evidence, and viewed all in one place, it paints a remarkable picture:https://t.co/qUxlVal2fK