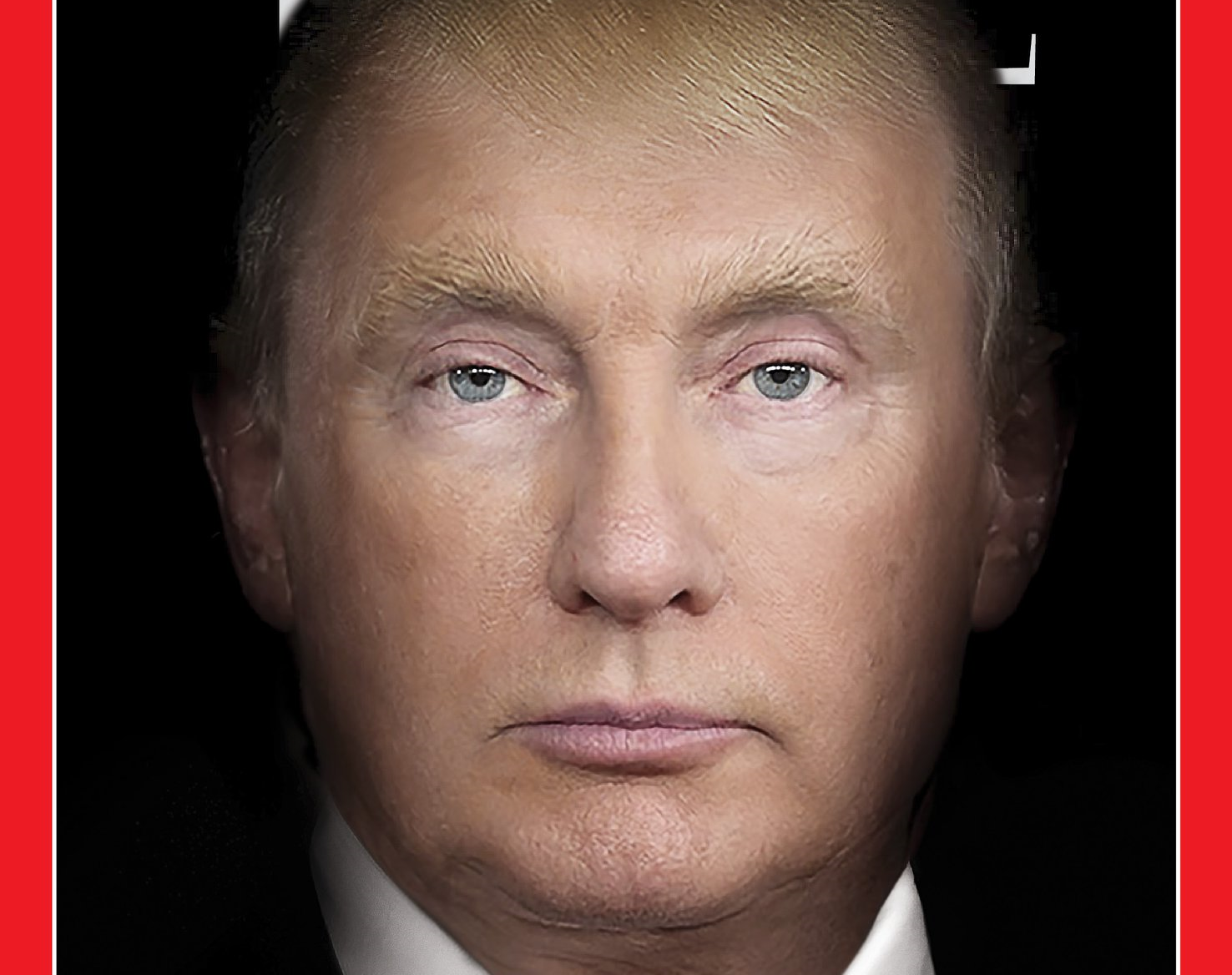 “The evidence included texts and emails from Russian military officers and information gleaned from a top-secret source close to Mr. Putin, who had described to the C.I.A. how the Kremlin decided to execute its campaign of hacking and disinformation.”

“Mr. Trump sounded grudgingly convinced, according to several people who attended the intelligence briefing. But ever since, Mr. Trump has tried to cloud the very clear findings that he received on Jan. 6, 2017, which his own intelligence leaders have unanimously endorsed.”

So that means, all this time whenever Trump said he didn’t know it was Russia or that it was someone else, he was not only lying, but engaging in a cover up and obstruction of justice ON BEHALF OF Russia.  High Treason.

The Trump-Russia narrative has taken on a life of its own, @rosiegray reports: https://t.co/NoiX3yuag7

Meanwhile, President Trump said he is “looking forward” to meeting again with Russian President Vladimir Putin to “begin implementing” issues they discussed during their summit earlier this week, CNN reports.  The Washington Post reports the meeting will be in the fall.  Thank you Trump for the reminding the voters to whom you are devoted right before the election.

“Putin has signaled in the wake of his summit with Trump that he and the US President reached several agreements, but neither Trump nor the White House have confirmed any substantive agreements between the two countries.”

Trump doubles down on Putin summit in the most literal way possible https://t.co/ythJnvgCY3

“Vladimir Putin told Russian diplomats that he made a proposal to Donald Trump at their summit this week to hold a referendum to help resolve the conflict in eastern Ukraine, but agreed not to disclose the plan publicly so the U.S. president could consider it,” Bloomberg reports. “Details of what the two leaders discussed in their summit in Helsinki, Finland, remain scarce, with much of the description so far coming from Russia.”

“Two days after President Trump’s summit with Russian President Vladi­mir Putin, Russian officials offered a string of assertions about what the two leaders had achieved,” the Washington Post reports.  “‘Important verbal agreements’ were reached at the Helsinki meeting, Russia’s ambassador to the United States, Anatoly Antonov, told reporters in Moscow Wednesday, including preservation of the New Start and INF agreements, major bilateral arms control treaties whose futures have been in question.”

“But officials at the most senior levels across the U.S. military, scrambling since Monday to determine what Trump may have agreed to on national security issues in Helsinki, had little to no information Wednesday.”

The GOP House voted this morning, 217-199, to zero out election security funding.

House Democrats all on their feet on the floor right now chanting “U-S-A” as they back a motion funding defense of American elections from Russian hacking. Republicans sitting, looking sour. Appropriations Chairman objects to the motion.  But every House Republican just voted against the motion, which would have restored Election Assistance Commission funding for grants to states for infrastructure upgrades to defend against cyberattacks.  All House Republicans are traitors.  Every one of them.

“The GOP’s bid to transform the federal bench with conservative judges hit its first significant snag Thursday, after Senate Republicans were forced to withdraw the nomination of Ryan Bounds, Trump’s pick to serve on the powerful 9th Circuit appeals court,” the Washington Post reports.

“Senate Majority Leader Mitch McConnell (R-KY) announced he would withdraw Bounds’s nomination after the vote to confirm him was delayed for nearly an hour, prompting speculation that the GOP did not have support it needed to carry Bounds’ nomination.”

“The indictment last week of 12 Russian military officers is focusing new attention on election servers in Georgia that are currently embroiled in a lawsuit between election integrity activists and the secretary of state,” Politico reports.

“The activists, intent on proving that the state’s paperless voting machines are not secure and should be replaced, want to examine two state election servers to look for evidence that Russian hackers or others might have compromised them to subvert elections. But the state has been fighting them for more than a year, citing sovereign immunity from lawsuits and also insisting to the news media that Georgia was never targeted by Russian hackers.”

Republicans on the House Intelligence Committee have gotten extremely petty in their attempts to stonewall Democrats who are trying to investigate Russian meddling in the 2016 election https://t.co/RVY4AIAKBr

Politico: “Republicans on the House Intelligence Committee on Thursday defeated an attempt by panel Democrats to subpoena the interpreter who worked for President Donald Trump during his summit with Russian President Vladimir Putin… Rep. Adam Schiff (D-CA) called for the vote to compel the interpreter to testify behind closed doors.”

“Chairman Devin Nunes initially declined to recognize Schiff’s motion before recessing the panel for about 20 minutes. When it reconvened, the committee voted along party lines, 11-6, to table Schiff’s attempt to bring the interpreter before the committee.”

A new Axios/Survey Monkey poll finds 79% of Republicans approve of President Trump’s performance during his meeting with Russian President Vladimir Putin while just 18% disapprove.  The more important number, however, is the number of independents that disapprove of Trump: 62%.  That number is historically high, signaling a devastating landslide.  Remember, most voters are independents and not Dems or GOP.

President Trump “stood by his threats to levy sweeping tariffs on automobile imports as a way to extract concessions from trading partners, despite opposition from the industry and discontent in Congress with the White House’s proposal,” the Wall Street Journal reports.

“Resistance to the tariffs is strong and growing. A coalition of foreign and domestic auto companies, along with auto dealers and auto-parts makers, released a letter on Wednesday urging Mr. Trump to refrain from the tariffs. A bipartisan group of 149 House members also urged the president not to move forward with the tariffs.”

Is Trump even in charge of his own government? https://t.co/xMdCBTEUD5

Nate Cohn: “Today, there are just nine Republicans who represent districts that tilt toward the Democrats, based on the districts’ voting in the last two presidential elections compared with the country as a whole. There were 24 Republicans in such a precarious position in 2006, 67 such Democrats in 2010 and 90 Democrats in 1994.”

Yes, this this this — so much of the Trump Era is the bitter harvest of a generation-long stretch of elite impunity. https://t.co/0WWaagyRNH

Josh Marshall says the bigs are starting to accept the unimaginable: “Over the last three days, I’ve seen a number of establishment figures, the people who always resist the outlandish explanations, who always stay basically conventional in their opinion and statements saying simply: Putin must have something on Trump.

Sometimes it’s specific, some kind of corrupt alliance; other times it’s amorphous, some kind of inexplicable hold Putin has over Trump by force of personality. But the kind of people who never said this kind of thing are saying it now. Somehow the President is compromised. Putin has something on him, or he has tempted his avarice with something. But there’s simply no innocent explanation for what we’re seeing.

That’s the shift. The Monday press conference made cautious, prominent people start to come to grips with the reality that Donald Trump, as crazy as it sounds and as difficult as it may be to believe, is under some kind of influence or control by a foreign adversary power, whether by fear or avarice or some other factor.”

Ron Brownstein: “Trump’s Republican skeptics, both inside and outside of Congress, agree that GOP officials who privately rail about Trump won’t publicly challenge him, primarily because polls show he’s so popular with the party base. But that’s partly a self-fulfilling prophecy: One reason Trump is so popular with the base is because no one has made a systematic case against his presidency from a Republican perspective.”

“A handful of Republican elected officials, and a slightly longer roster of party strategists and intellectuals, have intermittently criticized Trump… If anything, these solo flights may have weakened the anti-Trump cause inside the GOP.”

“There’s no easy solution to that dilemma. But history suggests the first step may be to find strength in numbers. In recent decades, other factions disaffected with their party’s direction have amplified their influence by coalescing and creating their own institutions. Probably the best-known recent example is the Democratic Leadership Council (DLC), which party centrists formed after Ronald Reagan routed old-style liberal Walter Mondale in 1984.”

A warning sign for House Republicans in 2018: Democratic challengers are out-fundraising them https://t.co/wnYh1yOTnO

“Democrats in 56 House districts surpassed Republican incumbents in second-quarter fundraising, according to a Politico analysis of the latest Federal Election Commission filings. Sixteen of those House Republicans finished the quarter with less cash in their campaign accounts than Democratic opponents, while no Democratic members lag their Republican challengers in cash.”

“The picture is even grimmer for Republicans in open, battleground districts, where a slew of retirements has put even more seats up for grabs. More than two-dozen Democratic candidates in those districts also topped GOP opponents in fundraising, and 19 of those Democrats also led in cash on hand.”

GOP rank-and-file solidarity with Trump does not mean he's going to be reelected (Republicans didn't dump Herbert Hoover, after all). But the idea they can get rid of him before November 2020 is at this point an illusion. https://t.co/fZVkcZ1MdT

Bloomberg: “Trump’s decision to start a trade war four months before the midterm elections carries a heavy risk for his party because many of his most loyal followers will bear the brunt of the fallout. This wasn’t the case with his major actions before now. The crackdown on refugees and immigrants didn’t hurt the white, blue-collar voters who make up the core of his support. And although they got little benefit from his tax cut, aimed primarily at corporations and the wealthy, neither were they directly penalized.”

“Trade is different. The bulk of punitive tariffs from around the globe falls heavily on Farm Belt and Rust Belt states that went for Trump. Many of the new measures are designed, with almost surgical precision, to harm his supporters. Of the 30 congressional districts hit hardest by Chinese tariffs on U.S. soybeans, 25 are represented by Republicans, five by Democrats—but all 30 voted for Trump.”

The nation’s top voting machine maker has admitted in a letter to Sen. Ron Wyden (D-OR) that the company “installed remote-access software on election-management systems it sold over a period of six years, raising questions about the security of those systems and the integrity of elections that were conducted with them,” Motherboard reports.

“Election-management systems are not the voting terminals that voters use to cast their ballots, but are just as critical: they sit in county election offices and contain software that in some counties is used to program all the voting machines used in the county; the systems also tabulate final results aggregated from voting machines.”

In an interview with CBS, Trump simply cannot offer any explanation of what he’s accomplishing with his strategy of cozying up to Putin’s Russia. https://t.co/JDCapEkqRn

“The European Union and Japan signed a landmark deal on Tuesday that will eliminate nearly all tariffs on products they trade,” the AP reports.

“The ambitious pact signed in Tokyo runs counter to President Trump’s moves to hike tariffs on imports from many U.S. trading partners. It covers a third of the global economy and markets of more than 600 million people.”