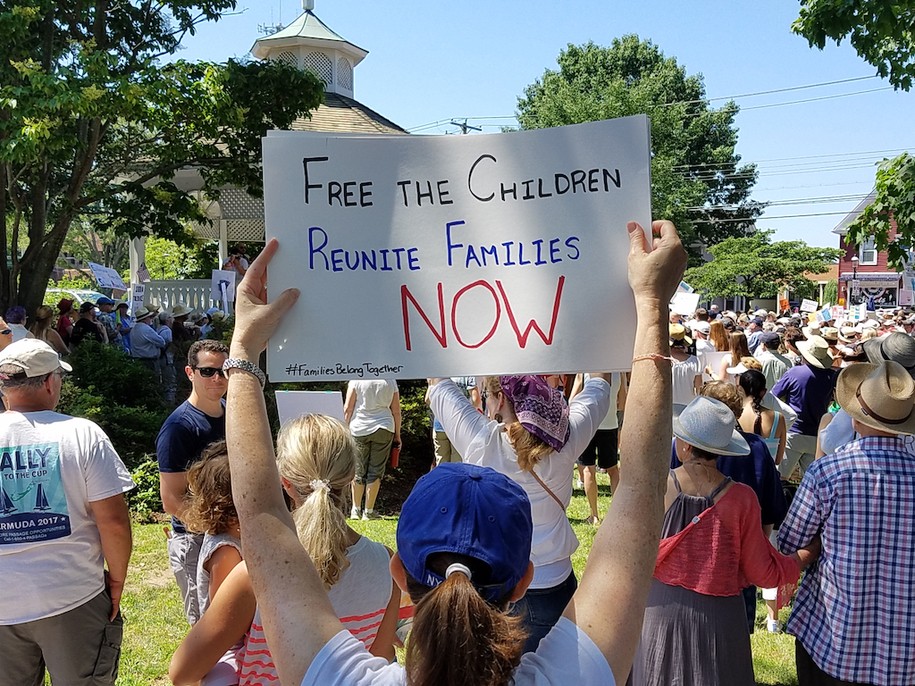 “U.S. intelligence agencies believe that North Korea has increased its production of fuel for nuclear weapons at multiple secret sites in recent months — and that Kim Jong Un may try to hide those facilities as he seeks more concessions in nuclear talks with the Trump administration,” NBC News reports.

“The intelligence assessment, which has not previously been reported, seems to counter the sentiments expressed by President Trump, who tweeted after his historic June 12 summit with Kim that ‘there was no longer a nuclear threat from North Korea.’”

Jasmin and Daisy from Wisconsin, children of immigrants, are attending the #FamiliesBelongTogetherMarch because they want people to know: “We’re still family, we come from the same roots. We’re in this together no matter what country you’re from.” pic.twitter.com/fqB3Nvmyed

“The Pentagon is analyzing the cost and impact of a large-scale withdrawal or transfer of American troops stationed in Germany amid growing tensions between President Trump and German Chancellor Angela Merkel,” the Washington Post reports.

“The effort follows Trump’s expression of interest in removing the troops, made during a meeting earlier this year with White House and military aides, U.S. officials said. Trump was said to have been taken aback by the size of the U.S. presence, which includes about 35,000 active-duty troops, and complained that other countries were not contributing fairly to joint security or paying enough to NATO.”

President Trump “was noncommittal when asked if he might lift sanctions imposed on Russia,” the APreports.

Asked if the U.S. might recognize Crimea to be part of Russia, he said: “We’ll have to see.”

Even in small-town Texas, protestors lining the streets.
Proud of my neighbors for voicing opposition.#FamiliesBelongTogetherMarch pic.twitter.com/DEmjGAOouR

A federal judge ruled that the Trump administration acted in an “arbitrary and capricious” manner when it allowed Kentucky to become the first state in the nation to require that low-income people work or otherwise engage in their communities to qualify for Medicaid, the Washington Post reports.

New York Times: “The ruling in the Kentucky case is the first on this issue, but it will almost certainly not be the last; the question may wind up before a more conservative Supreme Court with two Trump appointees. Three other states have already gotten permission from the Trump administration to impose work requirements, and seven more have asked for clearance to do so.”

President Trump “said he wanted to further lower the corporate tax rate, from 21% to 20%, as part of a second round of tax cuts later this year,” the Washington Post reports.

“Trump, in an interview with Fox News to mark the six-month anniversary of the $1.5 trillion tax-cut law Republicans passed last year, said other parts of the new tax plan would be tailored to the middle class.”

Said Trump: “One of the things we’re thinking about is bringing the 21 percent down to 20 and for the most part, the rest of it will go right to the middle class. It’s a great stimulus.”

How a podcaster tricked Trump into calling him from Air Force One https://t.co/42PlxGhrRt

“The U.S. ambassador to Estonia, James Melville, a career diplomat and member of the senior foreign service ranks, announced to friends Friday that he was resigning amid a string of controversial comments President Donald Trump made about U.S. allies in Europe,” Foreign Policy reports.

It’s still early, but the energy is amazing at Foley Square as NYers SHOW UP to say that #FamiliesBelongTogether. Clear messages today too to #EndFamilyDetention and #AbolishICE. pic.twitter.com/p9WQo3ZsvY

New York Times: “As corruption and violence gnaw at Mexico’s patience, voters have turned to a familiar face in Mr. López Obrador, a three-time candidate for president who once shut down Mexico City for months after a narrow loss, refusing to accept defeat.”

“Brandishing a deep connection with the poor, built over more than a decade of visits to every corner of this country of 120 million, he has managed a staggering lead ahead of Sunday’s vote.”

“If the poll numbers bear out on Election Day, Mr. López Obrador — who has promised to sell the presidential plane and convert the opulent presidential palace into a public park — could win by a landslide, putting a leftist leader in charge of Latin America’s second-largest country for the first time in decades.”

Vanity Fair: “Earlier this week… a woman chased him down the street, shouting at him that he could be a hero if he cooperates with the government and brings President Trump down. Last week, another person attempted to get a message to Cohen, saying, ‘Please let him know that he could go down in history as the man that saved this country. I think his family would be so proud of him. Even people like me that were disgusted with the things we heard on those audio recordings, would totally forgive him.’”

“Cohen’s friends have been whispering encouragements, too, particularly after the president distanced himself from Cohen earlier this month by telling reporters that he ‘liked’ Cohen, in the past tense.”

Said one person close to Cohen: “He’s frustrated. Washington is actively pushing him away as opposed to protecting him or welcoming him back in, when, at the same time, he has all these people telling him that he could change the course of the midterms, or 2020.”

The New York Times notes that two recent Supreme Court decisions “were the latest in a stunning run of victories for a conservative agenda that has increasingly been built on the foundation of free speech.”

“Conservative groups, borrowing and building on arguments developed by liberals, have used the First Amendment to justify unlimited campaign spending, discrimination against gay couples and attacks on the regulation of tobacco, pharmaceuticals and guns.”

“Turnout among black voters soared in last month’s Georgia primary, a show of strength that could bode well for Democrats in this year’s contests for governor and other statewide offices,” the Atlanta Journal Constitution reports.

“The number of black voters rose 43 percent in the May 22 election when compared with 2010, the last time there was a competitive race for governor. The data show the broad majority of African-American voters pulled Democratic ballots, which could bolster the hope of Stacey Abrams, who is racing to be the nation’s first black female governor. Her Republican opponent will be decided in a July 24 runoff between Lt. Gov. Casey Cagle and Secretary of State Brian Kemp.”

“At the same time, the proportion of white voters continues to decline. White voter participation in last month’s primary was down 9 percent from 2010.”

12-year-old Leah from Miami speaks at the D.C. immigration rally: "I don't understand why they are being so mean to us children. Don't they know how much we love our families? Don't they have a family, too?" (via CBS) pic.twitter.com/3jiOHZ9rji

“U.S. Circuit Judge Brett Kavanaugh, a former clerk for Supreme Court Justice Anthony M. Kennedy who is viewed as one of the leading contenders to replace him, has argued that presidents should not be distracted by civil lawsuits, criminal investigations or even questions from a prosecutor or defense attorney while in office,” the Washington Post reports.

“Kavanaugh’s position that presidents should be free of such legal inquiries until after they leave office puts him on the record regarding a topic of intense interest to Trump — and could be a central focus of his confirmation hearing if Kavanaugh were nominated to succeed Kennedy.”

WaPo has always had such great political reporting on the Old Dominion & this @LVozzella @jennaportnoy piece is another example: VA GOP is imploding in Corey Stewart's wake.https://t.co/te4dnnzQ3k