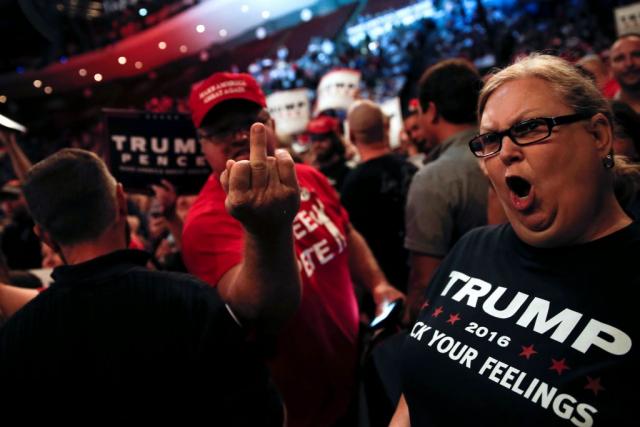 Remember kids, Trump supporters and Republicans can be as uncivil as they want.  They can make as many death threats, insults, bigoted slurs and threats of violence as they want with no consequence.  And they get to lie about Democrats without challenge from the media.  But Democrats and liberals must always be civil and docile, lest our supposed liberal media and punditry tsk-tsk us into oblivion.  And we can never accurately and factually call them racists or white nationalists, because that’s uncivil.

"Voters have a responsibility to confront incivility that threatens democracy rather than to prioritize treating officials super politely." – @zackbeauchamp on Sarah Sanders being asked to leave a restaurant this weekend https://t.co/2giV9dsZGs

FLAKE TO BLOCK JUDGES OVER TARIFFS. Sen. Jeff Flake (R-AZ) warned that he and a “number of senators,” are prepared to block President Trump’s judicial nominees if there is no action in the Senate on tariffs and other key issues, CNN reports.

Said Flake: “I do think that unless we can actually exercise something other than just approving the President’s executive calendar, his nominees, judges, that we have no reason to be there. So I think myself and a number of Senators, at least a few of us, will stand up and say let’s not move any more judges until we get a vote, for example, on tariffs.”

This is so good https://t.co/ulLByukt9S

MAD DOG MATTIS IS IN THE POUND.  NBC News: “The way these recent presidential decisions on major national security issues have played out, as detailed by current and former White House and defense officials, underscores a significant change in Mattis’s role in recent months. The president is relying less and less on the advice of one of the longest-serving members of his cabinet, the officials said.”

“The president has cooled on Mattis, in part because he’s come to believe his defense secretary looks down on him and slow-walks his policy directives… The president is now more inclined to rely on his own instincts or the advice of Pompeo and Bolton.”

HARRIS 2020.  Sen. Kamala Harris (D-CA) told NBC News that she isn’t ruling out a 2020 run for president in her most direct comments yet about her political future.  Said Harris: “I’m not ruling it out, no.”

“Harris is viewed as a rising star in Democratic politics. Her likely presidential ambitions are the subject of wide speculation, and she’s often included on the not-so-short lists of potential Democratic 2020 hopefuls.“

PUBLIC SHAMING IS BACK.  Washington Post: “Anger and division in American politics are creating a rising phenomenon: the public shaming and shunning of political figures while they are going about their private lives.”

“Few laws expressly prohibit a business from refusing service to a customer because of political views. Civil rights lawyers said that while there have been many cases in recent history involving establishments barring black people, women or members of the LGBT community, shunning people for their political ideology or affiliation has been relatively uncommon.”

“Until now. And in a time of intense political division, social media is magnifying the confrontations.”

In today's Republican Party, you either worship Donald Trump or you get the hell out: https://t.co/on6A5jAPJO

TRUMP’S STRATEGY.  President Trump “thinks he has found a winning formula,” his advisers tell Axios.  “And he might be right: The more he trashes Mueller, and the more he trashes the media and the media trashes him, the more Republicans want to have his back. And the more casual viewers see everything like the Russia probe as messy and muddy, not just Trump. Our politics are becoming ever more tribal, and his voters are numb to the outrageousness.”

“It’s arguably the most cynical strategy imaginable. But that doesn’t mean it can’t be successful politically.”

DEMOCRATS ARE THE HEALTHCARE PARTY.  Bloomberg Businessweek: “For the first time since it became law in 2010, Obamacare is a political asset for Democrats heading into an election—a striking turn after several cycles in which the law’s unpopularity helped Republicans sweep into power in legislative races across the country. Still, Democrats face a challenge: President Trump’s attacks on Obamacare prompted a broad reassessment of its merits and hurt his party’s political standing. To successfully exploit the issue, Democrats have to find a way to cut through the din of Trump news and scandal coverage and convince voters they’ll defend the health-care law from ongoing GOP sabotage and repeal efforts.”

“That will entail digging deep into their own pockets to pay for advertising. Democratic strategists have all but given up on trying to influence Trump-obsessed cable news coverage, even though a new NBC/Wall Street Journal poll found that health care is voters’ top issue, above jobs and the economy, guns, taxes, and immigration.”

How Texas Republicans got away with a racially discriminatory electoral map: https://t.co/l9CRoYIE1z pic.twitter.com/bRbuwkBOl6

SUPREME COURT PUNTS AGAIN ON PARTISAN GERRYMANDERING. The Supreme Court said it is declining to wade into a dispute over a North Carolina redistricting plan that a lower court had found violated the Constitution by overly favoring Republicans, the Washington Postreports.

Politico: “The justices had already passed up chances to issue sweeping decisions in cases from Wisconsin and Maryland involving claims of partisan gerrymandering. Instead, the high court ruled on narrow, technical grounds that steered clear of the central issue of when legislative districts are so skewed to favor one party that they violate voters’ constitutional rights.”

THOSE TRUMP TARIFFS ARE WORKING WONDERS.  “Harley-Davidson, up against spiraling costs from tariffs, will begin shifting the production of motorcycles headed for Europe from the U.S. to factories overseas… The maker of the iconic American motorcycle said in a regulatory filing Monday that EU tariffs on its motorcycles exported from the U.S. jumped between 6 percent and 31 percent. The company said it expects the tariffs will result in an incremental cost of about $2,200 per average motorcycle exported from the U.S. to the EU,” the Associated Press reports.

First Read: “It’s the unintended consequence of Trump’s tariff move, and it’s particularly stinging to Republicans, who have often held up Harley as exactly the kind of U.S. company that their policies would help to grow.”

An Arizona woman needed a drug to induce a miscarriage. Her pharmacist refused. https://t.co/KhVmsIM8Ad

WHERE IS OBAMA? New York Magazine: “Beyond the anguish is, often, simply bafflement: How did the most ubiquitous man in America for eight years virtually disappear? Over the course of his presidency, Obama cast himself as the country’s secular minister as much as its commander-in-chief, someone who understood the moral core of the nation and felt compelled to insist that we live up to it. What explains his near absence from the political stage, where he might argue publicly against the reversals of his policy accomplishments, and also from American life more broadly?”

“What is keeping him from speaking more frequently about the need to protect democratic norms and the rule of law, to be decent people? Where is the man who cried after Sandy Hook and sang in Charleston, who after each mass shooting tried to soothe an outraged nation, who spoke of American values in his travels across the globe? And, tactically, what is behind the relative silence of one of the most popular figures alive just as American politics appears to so many to be on the brink of breaking?”

Gallup shows President Trump’s approval rate down 4 points in a week to 41%. His disapproval jumped 5 points to 55%.  It’s the first poll since the crisis over separating families at the Mexican border began.

KANDER FOR MAYOR.  Jason Kander (D), the former Missouri secretary of state whose growing nationwide profile as a Democrat led to speculation about his presidential ambitions, confirmed his unexpected decision to run for mayor of Kansas City, the Kansas City Star reports.  Since the election is in 2019, this likely ends all the presidential speculation around Kander.  Maybe 2028?

Some Migrants Are Giving Up Asylum Claims in Hope of Seeing Children Faster https://t.co/tfWZRYUMH0

“Prince acknowledged last week that he ‘cooperated’ with Mueller’s investigation of Russian interference in the 2016 presidential election after falling under scrutiny amid questions about an alleged effort to establish a backchannel between the Trump administration and the Kremlin, something Prince has vehemently denied.”

“ABC News has since learned that Mueller is also reviewing Prince’s communications… A spokesperson for Prince released a statement noting that Prince has provided Mueller with ‘total access to his phone and computer.’”

BOND YIELD CURVE PREDICTS COMING RECESSION. “You can try and play down a trade war with China. You can brush off the impact of rising oil prices on corporate earnings,” the New York Times reports.  “But if you’re in the business of making economic predictions, it has become very difficult to disregard an important signal from the bond market.”

“The so-called yield curve is perilously close to predicting a recession — something it has done before with surprising accuracy — and it’s become a big topic on Wall Street.”