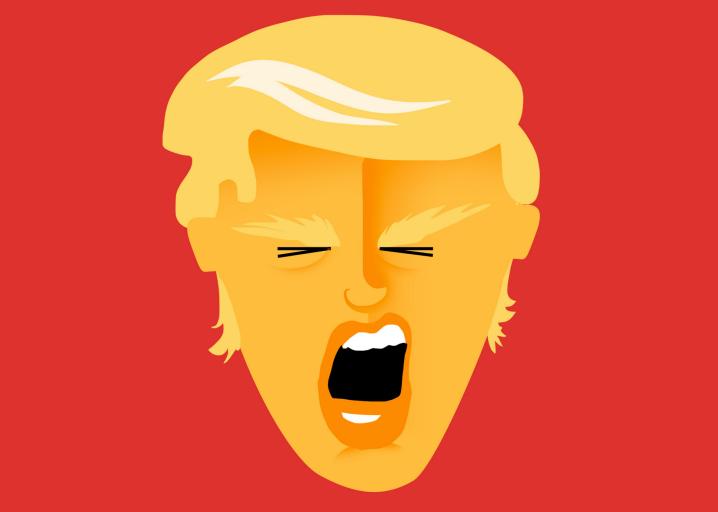 New Yorker: “Trump’s ability to gin up fears about illegal immigration, more than perhaps any other issue, won him the White House. Headed into a midterm election that will be won by the political party that can better rally its base, Trump has remained determined to talk about immigration, even when others in his party have resisted. Indeed, Republican leaders on Capitol Hill were furious with Trump as the immigration controversy spiraled out of control this week—a time they had planned to spend celebrating the G.O.P. tax cut, along with the general strength of the economy, which they hope to make the centerpiece of their fall campaign.”

“On Monday, as the political pressure on Trump was escalating, I met with Kristen Soltis Anderson, a Republican pollster who has advised G.O.P. leaders about this fall’s elections at a couple of recent retreats. Trump, she told me, had a ‘freakishly stable’ approval rating; in such a polarized moment, people know where they stand on the President. She said that, unlike in previous midterm elections in which the incumbent President’s party has done poorly, voter enthusiasm for Trump has remained strong among Republican voters, even as a blue wave of Trump-hating Democrats has been building.”

Said Anderson: “The question is, if the blue wave is coming, have Republicans built a large enough wall to stop it?”

While many Congress Rs balked at Trump's #familyseparation, they marched themselves into this quagmire by accepting almost every earlier step he has taken to redefine the party around his racially-infused nationalism. https://t.co/aMGukRoccd

Charles Pierce says the country’s head is clearing after two years of drunkenness: “You can feel the difference in the air. The members of the governing party, uneasy about the prospects for this year’s midterms anyway, are fairly trembling at the moment, seeing in their mind’s eyes a hundred 30-second spots of weeping toddlers behind chain-link walls. The president* has gone completely incoherent, standing firm until he doesn’t, looking for help in the Congress that he’ll never get, and reversing himself so swiftly on his one signature issue that he’s probably screwed himself up to the ankles in the floor of the Oval Office. By Friday afternoon, he was back on the electric Twitter machine, yapping about the Democrats and “their phony stories of sadness and grief.” And a hundred Republican candidates dive back behind the couch.

The country’s head is clearing. The country’s vision is coming back into focus and it can see for the first time the length and breadth of the damage it has done to itself. The country is hearing the voices that the cacophony of fear and anger had drowned out for almost three years. The spell, such as it was, and in most places, may be wearing off at last. The hallucinatory effect of a reality-show presidency* is dispersing like a foul, smoky mist over a muddy battlefield. […]

That’s the optimism, and it may, in fact, be illusory, but the power balance in our politics seemed to shift this week. Terrible policies are still coming from the various agencies. Scott Pruitt remains a grifter of nearly inhuman proportions, and a vandal besides. Neil Gorsuch continues to prove himself to be the reliable conservative hack for whom the Republicans stole a Supreme Court seat. But the crisis at the border is a leg-hold trap for all of them. There’s no way for them to keep faith with themselves and get out from under the humanitarian disaster they concocted. One day, maybe, brave Guatemalan mothers and their very brave children may be said to have saved the American Republic from slow-motion and giddy suicide. Some even may be our fellow citizens by then, and we should remember to thank them.”

“Tense arguments broke out at the White House over the past two days as top government officials clashed over how to carry out President Trump’s executive order on keeping together immigrant families at the Mexican border,” the New York Times reports.  The disputes started Thursday night. They continued Friday as Kevin K. McAleenan, the commissioner of Customs and Border Protection, returned to the White House to question how his agency was supposed to detain parents and children together when the law requires that children not be held indefinitely in jail.”

Washington Post: “The White House’s hastily crafted executive order to end child separations spurred confusion and fights within the federal government, and second-guessing from the president who had demanded the order in the first place.“

Dems are unified on immigration now. Will they still be when Trump is gone? https://t.co/qjbVifCwVs

A spokesman for United States Immigration and Customs Enforcement has resigned, saying that he could no longer “bear the burden” of spreading falsehoods on behalf of the Trump administration, the New York Times reports

A lesson for future Democrats in the orphaned migrant crisis: Accept the nature of the opposition, and try to help as many people as possible, as much as possible, in any particular political moment. https://t.co/tRyLL0bgCY

George Will: “Amid the carnage of Republican misrule in Washington, there is this glimmer of good news: The family-shredding policy along the southern border, the most telegenic recent example of misrule, clarified something. Occurring less than 140 days before elections that can reshape Congress, the policy has given independents and temperate Republicans — these are probably expanding and contracting cohorts, respectively — fresh if redundant evidence for the principle by which they should vote.”

Fortune reports Will has left the Republican Party.

"All presidents are tested now and again, and Trump is failing massively. It’s not quite the first time, and it certainly won’t be the last. Being president of the United States is a difficult job, and Donald Trump has no idea how to do it." https://t.co/tGpB5z2G4x

Katie Arrington (R), who defeated Rep. Mark Sanford (R-SC) in a primary last week, was in a car accident late Friday and taken to the hospital, the Charleston Post & Courier reports.  “She sustained a fracture in her back and several broken ribs. Other injuries will require major surgery, including the removal of her small intestine.”

There are consequences for being deplorable.https://t.co/Gp3kdisXVR

White House press secretary Sarah Huckabee Sanders was thrown out of a Virginia restaurant Friday night after the owner took issue with her role as “Trump’s mouthpiece,” the Daily Beast reports.

Vanity Fair: “The wrenching story of migrant children being separated from their parents at the U.S.-Mexico border has unfolded differently. Trump has been forced to play defense. It’s not just because the policy is cruel, inhumane, and an ugly stain on our country’s moral integrity. It is all of those things. But Trump has done plenty of ugly things. What’s different this time, and the handful of times Trump has found himself losing, is that there are pictures.”

“Think of the handful of moments when Trump has been subjected to a sustained drubbing that’s lasted more than just a day or two: the Access Hollywood tape. Sean Spicer’s lie about the size of the inauguration crowd. The massive airport protests around the travel ban. Trump’s “very fine people” comment about neo-Nazi marchers in Charlottesville. The Rob Porter domestic-abuse allegations fiasco. (Porter has denied the allegations.) And now the gross panorama of migrant children being separated from their desperate parents. All of these stories were accompanied by images—pictures or video—that either tilted public opinion against the president or blatantly contradicted the dubious claims of Trump and his allies.”

“President Trump likes nothing more than presenting himself as the ultimate deal maker, the master negotiator who can translate his success in business into the worlds of politics, policy and diplomacy,” the New York Times reports.

“Except that so far he has not. As he threw in the towel on immigration legislation on Friday, saying that Republicans should give up even trying until after the fall midterm elections, Mr. Trump once again fell short of his promise to make ‘beautiful’ deals that no other president could make.”

“His 17 months in office have in fact been an exercise in futility for the art-of-the-deal president.”

“A handful of new federal prosecutors have joined one of special counsel Robert Mueller’s cases — an indication that he is preparing to hand off at least one prosecution to others when his office completes its investigation into Russian interference in the 2016 election,” the Washington Post reports.

“The case those prosecutors are joining could drag on for years because the indictment charges a number of Russians who will probably never see the inside of a U.S. courtroom. Russia does not extradite its citizens.”

“Mueller is asking that George Papadopoulos, a former Trump campaign foreign policy adviser, be sentenced in September on the false-statement felony charge he pleaded guilty to last fall,” Politico reports.

“If the hearing goes forward as scheduled, Papadopoulos could become the second defendant sentenced in Mueller’s investigation into possible collusion between the Trump campaign and Russia.”

Jonathan Chait: “The most important thing to understand about the Russia scandal is that it perfectly fits a clear pattern of behavior. What Vladimir Putin is accused of doing to help Donald Trump win the presidency is essentially identical to what he is either accused of or proven to have done to help many other right-wing candidates in many other countries. As the plot in the United States is slowly exposed, a remarkably similar one in the United Kingdom is quickly surfacing.”

“Months before the United States narrowly elected Trump, the United Kingdom narrowly elected to withdraw from the European Union. Both votes advanced Russian foreign policy goals — in the latter case, by splitting up the Western alliance. (Trump has energetically pursued this strategy, too.) Russia employed many of the same tools to influence both elections. It deployed social-media bots and trolls to spread its message. It recruited friendly candidates who gave voice to previously marginal Russophile positions. And, as the newly surfaced evidence suggests, it indirectly financed the campaign.”

“Attorneys for former Trump campaign chairman Paul Manafort want a judge to bar any mention of Manafort’s connections to the president at his Virginia trial,” the AP reports.

“Manafort’s lawyers filed their motion Friday in federal court in Alexandria ahead of next month’s scheduled trial. Manafort is charged in Virginia with hiding millions of dollars from the IRS he earned advising Ukrainian politicians. He faces a separate indictment in Washington.”

“In court papers, Manafort’s lawyers argue that because Manafort’s alleged crimes occurred before he ever served on President Donald Trump’s campaign, any mention of Manafort’s connections to Trump are irrelevant.”

Three parents separated from their children after being detained at the border have filed a lawsuit, asking the federal government to provide access to basic info about their kids' whereabouts and to offer opportunities to see and hear their children. https://t.co/plxaUFZAc4

New York Times: “Mr. Trump, who campaigned on a get-tough approach to trade, has said his tariffs would make trade pacts more fair and ultimately help American workers, farmers, manufacturers and other. But the situation could soon become politically perilous to Mr. Trump, whose trade policies are starting to inflict economic pain across the country, including in areas that are home to the voters who helped him win election.”

“Business owners across the country are fearing the worst and wondering if Mr. Trump, who calls himself a master negotiator, will get the better end of the deal. Here are the ways several American products are being affected.”

President Trump told Congress in a letter that North Korea’s “provocative, destabilizing, and repressive actions… continue to constitute an unusual and extraordinary threat” to the United States, the Daily Beast reports. The letter comes just over a week after Trump boasted on Twitter that there “is no longer a nuclear threat from North Korea” and that “everybody can now feel much safer than the day I took office.”