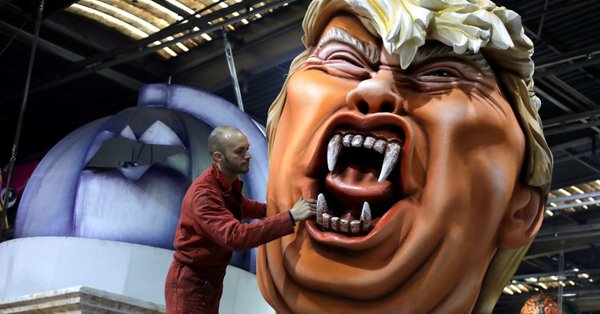 TRUMP TO SHUT DOWN GOVERNMENT IN SEPTEMBER OVER WALL.  Politico: “In a private meeting regarding the wall Monday, Trump fumed to senators and his own staff about the $1.6 billion the Senate is planning to send him this fall, according to two people familiar with the meeting. Trump wants the full $25 billion upfront and doesn’t understand why Congress is going to supply him funds in a piecemeal fashion — even though that’s how the spending process typically works.”

”The president said at the meeting that if Congress doesn’t give him the resources he needs for border security, he will shut down the government in September, according to one of the people familiar with the meeting. He did not give a specific number, but has been fixated on getting the $25 billion in a lump sum.”

If you're a GOP member of Congress, you're probably terrified about what controversies Trump will create between now and election day: https://t.co/SpqCiBTbTr

THE MIDTERMS WILL BE ABOUT IMMIGRATION AND RACISM.  “As Republicans try to keep their midterm election strategy focused on the economy, tax cuts and falling unemployment, President Trump sent his clearest signal yet on Monday that he intends to make divisive, racially charged issues like immigration central going into the campaign season,” the New York Times reports.  “Facing bipartisan criticism over his administration’s family separation practice on the border, Mr. Trump renewed the sort of bald and demagogic attacks on undocumented immigrants that worked well for him politically in his 2016 presidential campaign.”

“Top aides to President Trump are planning additional crackdowns on immigration before the November midterms, despite a growing backlash over the administration’s move to separate migrant children from parents at the border,” Politico reports.

“Senior policy adviser Stephen Miller and a team of officials from the Justice Department, Department of Labor, Department of Homeland Security, and the Office of Management and Budget have been quietly meeting for months to find ways to use executive authority and under-the-radar rule changes to strengthen hard-line U.S. immigration policies.”

“The message came as Trump was scheduled to visit Republican lawmakers on Capitol Hill on Tuesday evening to lobby them on immigration legislation that would provide billions of dollars for his long-sought border wall and other security priorities.”

“Amid a public outcry, Republicans are also planning to defy the White House by crafting legislation to ease the effects of the administration policy of dividing families.”

Meanwhile, Trump doubled down on Twitter claiming migrants are threatening to “infest” America.

“Congressional Republicans moved on Tuesday to defuse an escalating political crisis over immigration, but failed to agree on how to end President Trump’s policy of separating immigrant children from parents who cross illegally into the United States,” the New York Times reports.  “The Senate had one plan, and the House another. Mr. Trump remained defiant, refusing to act on his own.”

NEW: Just hours after Trump tried to rally House Rs on immigration, leaders are seeing it may not be enough. Whip check came back way under the 218 votes needed to pass the “compromise” bill. https://t.co/QfmxjDPPzC pic.twitter.com/SRO9Fx9lTn

Washington Post: “President Trump implored anxious House Republicans to fix the nation’s immigration system but did not offer a clear path forward amid the growing uproar over his administration’s decision to separate migrant families at the border.”

Trump is lying, obfuscating and inventing his own version of reality more frequently – a period that began post-Cohen raid but which intensified in recent days, via @AshleyRParker https://t.co/dAyKJv9yrY

SOME SEPARATIONS ARE PERMANENT.  Jon Sandweg, the former head of U.S. Immigration and Customs Enforcement, told NBC News that migrant parents separated from their children at the border are sometimes unable to relocate their child and remain permanently separated.

“While a parent can quickly move from detention to deportation, a child’s case for asylum or deportation may not be heard by a judge for several years because deporting a child is a lower priority for the courts, Sandweg explained.”

“As a result, parents may find themselves back in their home countries struggling to find their children. Many do not have access to legal counsel or understand the U.S. immigration or judicial systems.”

A 10 year old girl with down syndrome was taken from her mother at the border. When this was brought up on Fox News, Corey Lewandowksi's response was "wah, wah"

Fox anchor Sandra Smith sat back and said nothing. pic.twitter.com/CsQHTNEcfc

TRUMP HAS LOST TRACK OF 6,000 IMMIGRANT CHILDREN.  “The Trump administration has likely lost track of nearly 6,000 unaccompanied migrant children, thousands more than lawmakers were alerted to last month,” according to a McClatchy review of federal data.

“Federal officials acknowledged last month that nearly 1,500 unaccompanied minors arrived on the southern border alone without their parents and were placed with sponsors who did not keep in touch with federal officials, but those numbers were only a snapshot of a three- month period during the last fiscal year.”

TRUMP GOES ROGUE.  George Packer: “Power politics favors regimes accustomed to operating outside the liberal order…. Trump imagines that America unbound, shaking hands or giving the finger, depending upon short-term interests and Presidential whims, will flourish among the other rogues. After his meeting with Kim, he flew home aglow with wonder at his own dealmaking prowess, assuring Americans that they could now sleep in peace. In fact, Trump had secured nothing except the same vague commitment to dismantling North Korea’s nuclear program which the regime has offered and routinely betrayed in the past. Meanwhile, he gave up something real—joint U.S.-South Korean military exercises, which he called ‘provocative,’ the language of totalitarian and aggressive North Korea. Without allies and treaties, without universal values, American foreign policy largely depends on what goes on inside Trump’s head. Kim, like Putin, already seems to have got there.”

“Power politics is not a system that plays to American strengths. For all our lapses, we thrived for seventy years by standing for something. It wasn’t boilerplate at all, and we are present at the destruction. When the next global economic crisis or major war or terrorist attack happens, America will be alone.”

KELLY HAS SENIORITIS.  Politico: “According to four people close to Kelly, the former Marine general has largely yielded his role as the enforcer in the West Wing as his relationship with Trump has soured. While Kelly himself once believed he stood between Trump and chaos, he has told at least one person close to him that he may as well let the president do what he wants, even if it leads to impeachment — at least this chapter of American history would come to a close.”

Here's how the arrest of an obscure aide to Nigel Farage could reveal a web of criminality that should have Donald Trump worried.https://t.co/jXPza3uv5G

TRUMP ESCALATES TRADE WAR. “President Trump threatened Monday to levy tariffs on nearly all of China’s products shipped to the United States unless Beijing agrees to a host of sweeping trade concessions, a dramatic escalation that would enlist American consumers in the brewing U.S.-China commercial conflict,” the Washington Post reports.

“In a statement, Trump said he had ordered his chief negotiator, U.S. Trade Representative Robert E. Lighthizer, to draw up a list of $200 billion in Chinese products that will be hit with tariffs of 10 percent if China refuses his demands to narrow the yawning U.S. trade deficit and change its industrial policies.”

“President Trump’s threat to impose tariffs on almost every Chinese product that comes into the United States intensified the possibility of a damaging trade war, sending stock markets tumbling on Tuesday and drawing a rebuke from retailers, tech companies and manufacturers,” the New York Times reports.

“The Trump administration remained unmoved by those concerns, with a top trade adviser, Peter Navarro, insisting that China has more to lose from a trade fight than the United States. He also declared that Mr. Trump would not allow Beijing to simply buy its way out of an economic dispute by promising to import more American goods.”

SEPARATING KIDS DOES PHYSICAL DAMAGE TO THE KIDS.  Washington Post: “This is what happens inside children when they are forcibly separated from their parents.”

“Their heart rate goes up. Their body releases a flood of stress hormones such as cortisol and adrenaline. Those stress hormones can start killing off dendrites — the little branches in brain cells that transmit mes­sages. In time, the stress can start killing off neurons and — especially in young children — wreaking dramatic and long-term damage, both psychologically and to the physical structure of the brain.”

Said Harvard Medical School professor Charles Nelson: “The effect is catastrophic. There’s so much research on this that if people paid attention at all to the science, they would never do this.”

GIULIANI ADMITS HIS THREATS ARE BLUFFS, IS INTERVIEWED BY FBI.  Rudy Giuliani said that “he was actually just bluffing last week when he called for Justice Department leaders to suspend special counsel Robert Mueller’s investigation within 24 hours,” Politico reports.  Said Giuliani: “That’s what I’m supposed to do. What am I supposed to say? That they should investigate him forever? Sorry, I’m not a sucker.”

Meanwhile, “Giuliani says FBI agents interviewed him in his room at the Trump International Hotel earlier this year regarding his 2016 remarks predicting a ‘surprise’ in the closing days of the presidential race that would benefit then-Republican nominee Donald Trump,” the HuffPost reports.   Said Giuliani: “That’s all they asked about. What was I talking about in terms of ‘surprise’? What was I talking about when I was talking about new information?”

“Giuliani was a top campaign adviser in the summer and autumn of 2016 and is now leading the team of lawyers representing Trump in special counsel Robert Mueller’s Russia investigation. His disclosure of the February interview confirms the existence of a Justice Department investigation into leaks from the bureau’s New York field office that may have cost Democrat Hillary Clinton the election.”

ROSS IS CORRUPT TOO. Commerce Secretary Wilbur Ross “shorted stock in a shipping firm — an investment tactic for profiting if share prices fall — days after learning that reporters were preparing a potentially negative story about his dealings with the Kremlin-linked company,” the New York Times reports.

Confirming what we’ve seen in special elections, America’s political geography seems to be reverting back to its pre-Trump state. https://t.co/9LDZmNgP0e

KANSAS VOTER LAW STRUCK DOWN. “A federal judge has struck down a Kansas voter citizenship law that Secretary of State Kris Kobach had personally defended,” the Wichita Eagle reports.  “Judge Julie Robinson also ordered Kobach, who is seeking the Republican nomination for governor, to take more hours of continuing legal education after he was found in contempt and was frequently chided during the trial over missteps.”

“In an 118-page ruling Monday, Robinson ordered a halt to the state’s requirement that people provide proof of citizenship in order to register to vote. The decision holds the potential to make registration easier as the August and November elections approach.”

THE WHITE SUPREMACIST FRINGE IS IN POWER. “Jeff Sessions and Stephen Miller spent years on the political fringe in the nation’s capital as high-decibel immigration hard-liners, always warning about the dangers of open borders but rarely in a position to affect law or policy,” the New York Times reports.

“Now, Mr. Sessions, the attorney general and former senator from Alabama, and Mr. Miller, the president’s top policy adviser and former Senate aide to Mr. Sessions, have moved from the edges of the immigration debate to its red-hot center. Powerful like never before, the two are the driving force behind President Trump’s policy that has led thousands of children to be separated from their parents at the nation’s southern border.”

Separating families at the border is really unpopular. https://t.co/b8eT7mBLGW pic.twitter.com/h8z5h13CKS