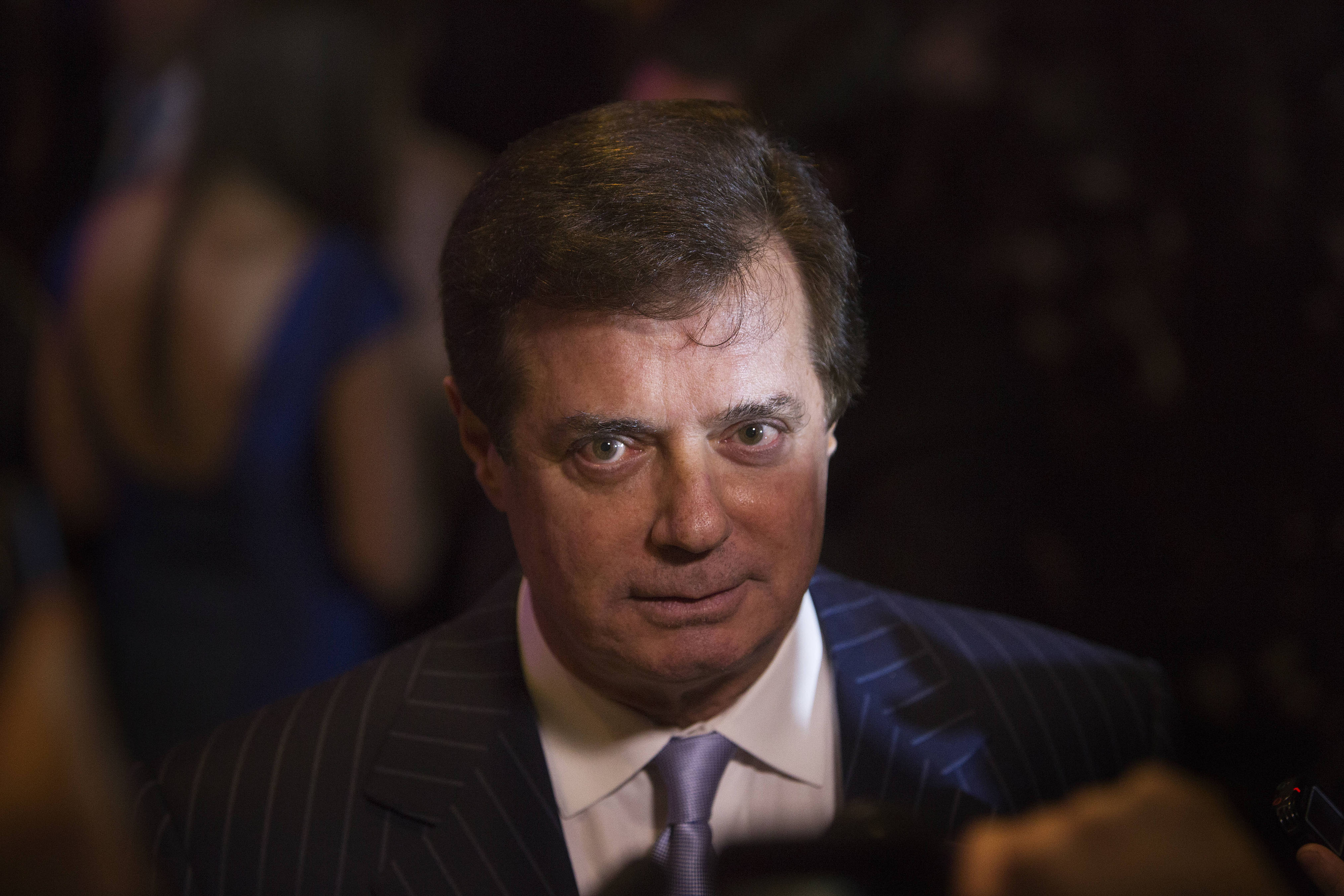 ENJOY JAIL, TRAITOR.   “A federal judge revoked Paul Manafort’s bail and sent him to jail on Friday to await trial, citing new charges that Mr. Manafort had tried to influence the testimony of two of the government’s witnesses after he had been granted bail,” the New York Times reports.

“Mr. Manafort, President Trump’s former campaign chairman, had been allowed to post a $10 million bond and remain at home while awaiting his September trial on a host of charges, including money laundering and false statements.”

Michael Cohen has expressed anger with the treatment he has gotten from the President as well as comments from Rudy Giuliani, @KaraScannell reports https://t.co/aJhIpZzWyc

COHEN IS READY TO FLIP.  Michael Cohen “has indicated to family and friends he is willing to cooperate with federal investigators to alleviate the pressure on himself and his family,” CNN reports.  “Cohen has expressed anger with the treatment he has gotten from the President, who has minimized his relationship with Cohen, and comments from the President’s lawyer Rudy Giuliani… The treatment has left him feeling isolated and more open to cooperating.”

“Investigators in the U.S. attorney’s office for the Southern District of New York are examining whether Mr. Cohen violated any federal disclosure laws in connection with his consulting deals, including whether he lobbied for domestic or foreign clients without properly registering.”

To be clear: there is no law that requires immigrant families to be separated. https://t.co/mDS8tTEdxX

REPORTERS ARE FINALLY TIRED OF SARAH SANDERS’ SHIT.  Politico: “Weeks of escalating strain between press secretary Sarah Huckabee Sanders and reporters boiled over in the White House briefing room on Thursday, as press members tussled with Sanders over immigration issues, she insulted the intelligence of one reporter, and another interrupted the proceedings with a dramatic outburst.

“Reporters have been growing frustrated with Sanders over the lack of briefings and their short length. In addition, Sanders repeatedly refused to discuss her past denials that President Donald Trump had dictated a false statement about why his son met with a Russian lawyer—since contradicted by the president’s lawyers—prompting reporters to openly question her credibility.”

In which the President of the United States suggests he wants the American people to treat him like North Koreans treat Kim Jong-un, and smirks about Kim executing his generals: https://t.co/LplTPKeLaX

FULL FASCIST.  “He speaks and his people sit up at attention. I want my people to do the same.”  — President Trump, quoted by Axios, explaining how North Korea’s Kim Jong Un is a “strong leader.”

When you speak Donny, the only thing of mine that stands at attention is my middle finger.

PRUITT’S CORRUPTION, EXHIBIT 27.  “Senior staff members at the Environmental Protection Agency frequently felt pressured by Scott Pruitt, the administrator, to help in personal matters and obtain special favors for his family, according to interviews with four current and former E.P.A. officials who served as top political aides to Mr. Pruitt,” the New York Times reports.

“The officials said that Mr. Pruitt, who ‘had a clear sense of entitlement,’ in the words of one of them, indicated that he expected staff members’ assistance with matters outside the purview of government.”

The aides said that Pruitt “told them that he expected a certain standard of living akin to wealthier Trump Cabinet members. The aides felt as if Mr. Pruitt—who is paid about $180,000 a year—saw them as foot soldiers in achieving that lifestyle.”

“The Senate battleground map has shrunk dramatically in recent weeks — a net plus for Democrats but not enough to change their status as heavy underdogs to win the chamber in November,” Politico reports.

“Democratic incumbents look increasingly safe in four Rust Belt states President Trump carried in 2016 — Ohio, Michigan, Pennsylvania and Wisconsin, where Republicans are locked in a bitter primary until August. Both parties agree a core universe of states are truly in play: Republicans are targeting Democratic incumbents in Missouri, Indiana, Florida and North Dakota, while Democrats are contesting GOP-held seats in Nevada, Arizona and Tennessee. There is disagreement on how competitive West Virginia and Montana are.”

I traced how the Trump admin first proudly trumpeted their family separation policy, then started saying they had nothing to do with it: https://t.co/gZ3U2Nks6x

GOD DID NOT ORDAIN YOU, JEFF.  Attorney General Jeff Sessions “offered a full-throated defense of the Trump administration’s policy of separating children from their parents at the border, saying that having kids does not give migrants immunity from prosecution — and found justification for his policies in the Bible,” NBC News reports.

Said Sessions: “Persons who violate the law of our nation are subject to prosecution. I would cite you to the Apostle Paul and his clear and wise command in Romans 13 to obey the laws of the government because God has ordained them for the purpose of order. Orderly and lawful processes are good in themselves and protect the weak and lawful.”

First Read: “You have to wonder: For a political party that already has problems with suburban women, is the GOP/Trump vulnerable here to being accused of lacking compassion? And how might that end up impacting the immigration debate?”

BEGUN, THE TRADE WARS HAVE.  President Trump “has approved a plan to impose punishing tariffs on tens of billions of dollars of Chinese goods as early as Friday, a move that could put his trade policies on a collision course with his push to rid the Korean Peninsula of nuclear weapons,” the AP reports.

“Trump met Thursday with several Cabinet members and trade advisers and was expected to impose tariffs on at least $35 billion to $40 billion of Chinese imports… The amount of goods could reach $55 billion.”

New York Times: “Beijing has said it will retaliate by imposing its own tariffs on a list of roughly $50 billion in American exports, a list likely to include agricultural products and manufactured goods.”

This is a vitally important perspective: someone who worked in a shelter for immigrant minors before and after Trump’s family separation policy went into effect.

He describes the utter chaos it initiated, and why it led him to blow the whistle. https://t.co/7tmG7LIVXx

“About 2,000 children have been separated from their families at the border over a six-week period during a crackdown on illegal entries,” according to U.S. Department of Homeland Security figures obtained by the Associated Press.  “The figures show that 1,995 minors were separated from 1,940 adults from April 19 through May 31. The separations were not broken down by age, and included separations for illegal entry, immigration violations, or possible criminal conduct by the adult.”

Two former senior U.S. officials said that “they had also been briefed on Trump’s orders to his staff to plan for the Putin summit soon. One of them said it could even occur on the first leg of Trump’s trip to Europe next month, before Trump attends the annual NATO meeting.”

DON’T FORGET PENCE. HE IS CORRUPT AS FUCK TOO.  “Vice President Pence has transformed his office into a new entry point for lobbyists seeking to influence the Trump administration across federal agencies,” the New York Times reports.

“About twice as many companies and other interests hired lobbyists to contact the vice president’s office in Pence’s first year than in any single year during the tenures of Vice Presidents Joe Biden and Richard B. Cheney, filings show.”

TRUMP’S IMPATIENCE NEARLY RUINED THE “GOT NOTHING” SUMMIT.  Washington Post: “After arriving in Singapore on Sunday, an antsy and bored Trump urged his aides to demand that the meeting with Kim be pushed up by a day — to Monday — and had to be talked out of altering the long-planned and carefully negotiated summit date on the fly.”

Said Trump: “We’re here now. Why can’t we just do it?”  “Trump’s impatience, coupled with a tense staff-level meeting between the two sides on Sunday, left some aides fearful that the entire summit might be in peril.”

Please stop claiming that the IG report gives "fodder" to Trump's attacks on the Mueller probe.

There is no neutral way to make this claim. It effectively endorses bad-faith lies about the IG report's actual findings.

HERE COMES THE IRS.  “The New York attorney general sued President Trump and his foundation on Thursday. But his bigger problem might be with the Internal Revenue Service,” the New York Times reports.

“For example, the I.R.S. could seek to revoke the foundation’s tax-exempt status. The agency could even do so retroactively, which would stick the foundation with a corporate tax bill going back years… That is the sort of information that investigators would weigh in determining whether he should be charged with filing a false tax return.”

Said criminal tax lawyer Jenny Johnson Ware: “People have gone to prison for stuff like this.”

“Real estate records show that Mr. Cagle, who faces a runoff for the Republican nomination on July 24, purchased the one-bedroom apartment at 24 percent less than its appraised value — below comparable sales prices — and sold it last year at a 29 percent profit. He was preparing for his first run for governor when, without an agent, he negotiated the deal with Terry Hobbs, a longtime lobbyist who represents the natural gas marketer Scana.”