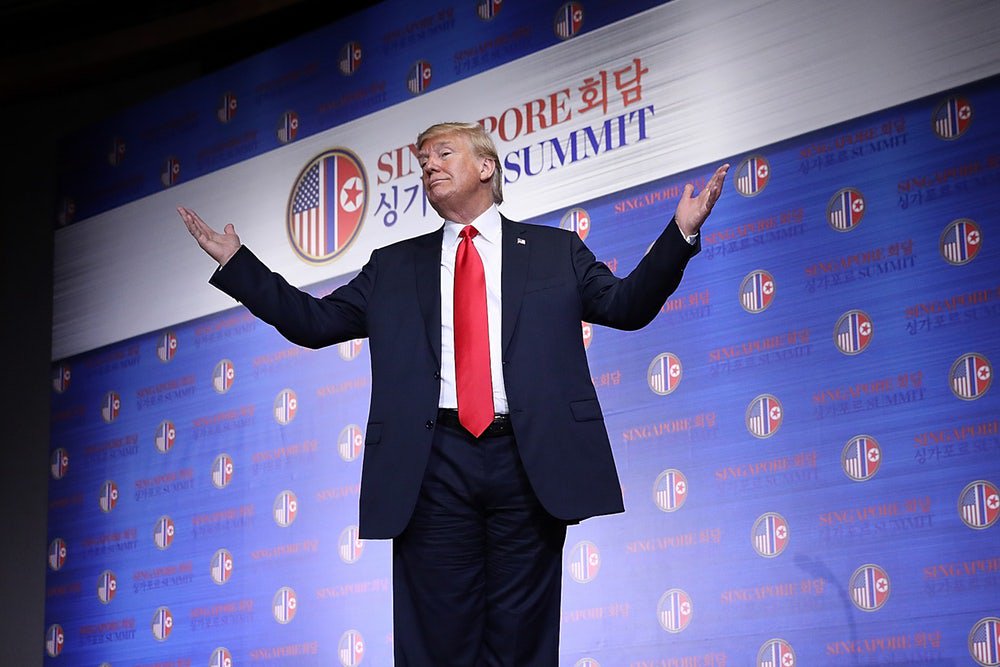 “On paper, there is nothing President Trump extracted from North Korea’s leader, Kim Jong-un, in their summit meeting that Mr. Kim’s father and grandfather had not already given to past American presidents,” the New York Times reports.

“In fact, he got less, at least for now. But as Mr. Trump made clear in a lengthy but vaguely worded reconstruction of their five hours of talks, none of that really matters to him. Instead, he is betting everything on the ‘terrific relationship’ and ‘very special bond’ that he said he developed with the 34-year-old dictator, and Mr. Trump’s seeming certainty that they now view the future elimination of North Korea’s arsenal of atomic weapons the same way.”

“Honestly, I think he’s going to do these things. I may be wrong, I mean I may stand before you in six months and say, hey, I was wrong — I don’t know that I’ll ever admit that, but I’ll find some kind of an excuse.” — President Trump, quoted by the New York Times, on his agreements with North Korean leader Kim Jong Un.

Nicholas Kristof: “Trump made a huge concession — the suspension of military exercises with South Korea. That’s on top of the broader concession of the summit meeting itself, security guarantees he gave North Korea and the legitimacy that the summit provides his counterpart, Kim Jong-un.”

“Within North Korea, the ‘very special bond’ that Trump claimed to have formed with Kim will be portrayed this way: Kim forced the American president, through his nuclear and missile tests, to accept North Korea as a nuclear equal, to provide security guarantees to North Korea, and to cancel war games with South Korea that the North has protested for decades.”

“In exchange for these concessions, Trump seems to have won astonishingly little.”

Martin Longman: “This summit was ludicrous, morally bankrupt, and potentially harmful to our military readiness and our longterm commitment to the security of both South Korea and Japan. The Joint Statement is a laughable document. It says nothing of any consequence other than that both sides will work diligently at “recovering POW/MIA remains” from the combat phase of the Korean War. The DPRK reaffirmed a commitment to work toward “complete denuclearization of the Korean Peninsula.” The key word is “reaffirmed.” In the agreement, the United States committed to little other than working to establish relations, but this was accompanied by a declaration that we will end “provocative” and “expensive” military exercises with the South Korean armed forces.

Leaving aside what Trump and Kim might have gained politically simply by agreeing to meet, Kim is going home with an enormous victory and Trump is coming home with no tangible prize.

The South Koreans were described as ‘blindsided” by the joint exercises declaration, as well they should be since this isn’t some simple negotiating chip but rather a key element of their military preparedness. The Chinese had been insisting that we cease these exercises in exchange for North Korea ceasing nuclear and rocket testing. In effect, if only informally, that’s the deal that Trump just struck. I would not call that the Art of the Deal.”

“The Trump administration is looking to build tent cities at military posts around Texas to shelter the increasing number of unaccompanied migrant children being held in detention,” McClatchy reports.

“The Department of Health and Human Services will visit Fort Bliss, a sprawling Army base near El Paso in the coming weeks to look at a parcel of land where the administration is considering building a tent city to hold between 1,000 and 5,000 children.”

This is AMAZING. All Trump's bonkers praise for Kim and his style of government packed together in one place ! https://t.co/gUpWlnIDq3 via @TPM

“A single tariff benefiting one paper factory in Washington state could prompt the loss of thousands of U.S. newspaper jobs,” the Philadelphia Inquirer reports.

“The ripple effect started with One Rock Capital Partners, a New York private equity firm that bought a paper mill in Longview, Wash., and then petitioned the Trump commerce department for tariffs against Canadian paper. That one mill employs about 250 people.”

“The result? The equity firm won punishing newsprint tariffs that have pushed up newsprint prices by about 30 percent. Already newspapers around the U.S. have begun making thousands of layoffs.”

The Trump presidency usually resembles a heavy-handed satire of how fascism could come to America. Occassionally, tho, it becomes a sprightly comedy of errors ("What if a seedy real-estate developer were mistaken for the POTUS?"). Singapore was the latter.https://t.co/0spbHlQ5mi

“President Trump’s pledge to cancel military exercises on the Korean Peninsula surprised not only allies in South Korea but also the Pentagon,” the New York Times reports. “Hours after Mr. Trump’s announcement in Singapore, American troops in Seoul said they are still moving ahead with a military exercise this fall — Ulchi Freedom Guardian — until they receive guidance otherwise from the chain of command.”

“In Washington, officials at the Pentagon, State Department and White House were scrambling to figure out exactly the impact of Mr. Trump’s comments.”

Vanity Fair: “During Donald Trump’s sleepless-in-Singapore star turn, White House advisers have been consoling themselves with the thought that, for at least a few days, his hot war with Robert Mueller has turned cold. Trump last tweeted about the Russia investigation on June 7. But there’s considerable anxiety that the détente is about to end. As Trump returns from Singapore after his historic, self-touted, inconclusive meeting with Kim Jong Un, people close to the president say the Mueller probe is reaching an inflection point.”

Said one friend of the president: “It’s going to hit the fan pretty soon.”

“Within the next month, Mueller is reportedly planning to deliver his findings in the obstruction of justice investigation to Deputy Attorney General Rod Rosenstein… The difference is that Trump is now more unshackled than at any point in his presidency, meaning that firing Mueller or Rosenstein remains a possibility.”

“On a leader-to-leader level, relationships between the U.S. and its most powerful allies are in tatters,” Axiosreports.

“Antipathy for the U.S. in allied countries extends far beyond those leaders, and it’s spiking under Trump. The U.S. has historically been the de facto leader within its strategic alliances, but an unpopular leader can quickly become a bully.”

Sen. Bob Corker (R-TN) accused his party of cowering before President Trump in an impassioned speech on the Senate floor, CNN reports.

“In an animated exchange, Corker — who was trying to get a vote on an amendment as part of an ongoing debate over the Senate’s defense bill — argued that Republicans were blocking his trade proposal because they were afraid of Trump and what he might do to the party if they upset him in an election year.”

Said Corker: “We might poke the bear! My gosh, if the President gets upset with us we might not be in the majority.”

He added: “The United States Senate right now on June 12 is becoming a body where, well, we’ll do what we can do, but my gosh, if the President gets upset with us, then we might not be in the majority. And so let’s don’t do anything that might upset the President.”

Jen Hayden at Daily Kos: “Donald Trump’s strategy for meeting with a man known for starving his people, publicly executing dissidents and everyday citizens on a whim via poisoning, firing squads, anti-aircraft missiles and even flamethrowers? A man (and his father before him) who has for years lied about North Korea’s intention to denuclearize, while building an arsenal? If you are Donald Trump, you hail him as a hero. What is this bizarre fake movie trailer that Donald Trump showed Kim Jong-un in his iPad?”

Reporters thought this video was North Korea propaganda. It came from the White House. https://t.co/fvIFR8YvTN

President Trump said that Canadian Prime Minister Justin Trudeau “learned” from the mistake of criticizing him and it’s going to cost Canada “a lot of money,” the Globe and Mail reports.  “He said the Canadian leader must not have realized that Trump had televisions on Air Force One, allowing him to monitor Trudeau’s news conference at the end of the G7 summit.“

I support diplomacy and oppose war. There are no military options. But I support effective diplomacy, not place holder diplomacy. The lack of war is a low standard. We should expect more – even from Trump. https://t.co/urdFBKL9uE

New York Times: “To negotiate the terms of the joint statement, the administration recruited Sung Y. Kim, a seasoned North Korea negotiator now serving as American ambassador to the Philippines, to lead that effort. Ambassador Kim and a small group of diplomats held a series of talks last week with the North Koreans in Panmunjom, the so-called truce village in the Demilitarized Zone between North and South Korea.”

“People briefed on the meetings said American negotiators had found it difficult to make significant headway with the North Koreans, in part because the White House did not back them up in taking a hard line.”

“A federal judge on Monday sharply criticized the Justice Department’s argument that President Trump’s financial interest in his company’s hotel in downtown Washington is constitutional, a fresh sign that the judge may soon rule against the president in a historic case that could head to the Supreme Court,” the New York Times reports.

“The plaintiffs in the lawsuit, the District of Columbia and the state of Maryland, charge that Mr. Trump’s profits from the hotel violate anti-corruption clauses of the Constitution that restrict government-bestowed financial benefits, or emoluments, to presidents beyond their official salary.”

"Trump’s betrayal of South Korea and eruption at Trudeau are not one-off events…[but] part of a broader slate of Trump policies and diplomatic efforts that have, put together, fundamentally weakened America’s ties with its traditional allies" https://t.co/S6bvMDIBOo

“Heading into the midterm elections, President Trump has become a one-man litmus test in some of his party’s primaries, imperiling incumbents in races where policy issues seem to matter less to voters than personal loyalty to the president,” the New York Times reports.

“Perhaps nowhere has this been seen more acutely than in Alabama’s Second Congressional District, where Republican voters face a peculiar choice in a runoff: A congresswoman who condemned Mr. Trump but has since voted nearly in lock step with him, or a challenger who was once a Democrat who supported Nancy Pelosi, but now sounds much like the president.”

Trump got nearly nothing from Kim Jong Un in Singapore. But maybe this is the start of something, writes @UriLF: https://t.co/qIYiByLzgF

“Trump’s affinity for Heitkamp, who got a shout-out and a handshake at a recent White House bill signing, has frustrated top Republicans who see winning her Democratic seat as crucial to holding onto their fragile 51-to-49 majority. No one has felt it more acutely than GOP Rep. Kevin Cramer, whom Trump personally recruited to run against Heitkamp.”