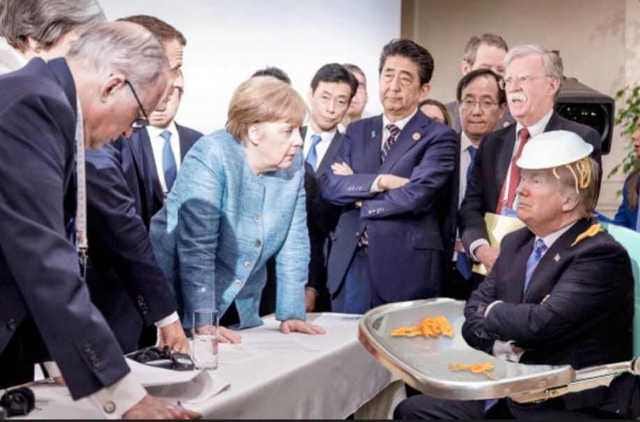 The G7 Summit was an absolute disaster for Donald Trump, the United States, and for pretty much everyone. Trump lost a handshake battle, launched a worldwide caption contest, came late, and left early.   He pretty much pouted the whole time, when he wasn’t begging everyone to embrace Putin.

“In a remarkable pair of acrimony-laced tweets from aboard Air Force One as he flew away from the Group of 7 summit toward a meeting with North Korea’s leader, Mr. Trump lashed out at Justin Trudeau. He accused the prime minister, who hosted the seven-nation gathering, of making false statements.”

Bloomberg: “His comments undermine the G-7, a bloc that was once a pillar of U.S. foreign policy and has long acted as a defender of the global economic system. It could also cause fresh friction with his northern neighbor as tensions percolate over efforts to redraw the North American Free Trade Agreement.”

"Trump is day by day abdicating U.S. leadership. 'He is testing to the breaking point relationships that there was never any reason to test in the first place,' said the G7 official, resignedly." Read @davidfrum on the damage done: https://t.co/CjlsQx2cds

“He’s like Heath Ledger’s Joker — but without the operational excellence.”  — A senior G7 official, quoted by The Atlantic, about President Trump’s performance at the G7 summit.

Trump trade adviser Peter Navarro escalated the White House’s rebuke of Canadian Prime Minister Justin Trudeau, calling him weak and dishonest, CNN reports.  Said Navarro: “There’s a special place in hell for any foreign leader that engages in bad faith diplomacy with President Donald J. Trump and then tries to stab him in the back on the way out the door.”  He added: “And that’s what bad faith Justin Trudeau did with that stunt press conference. That’s what weak, dishonest Justin Trudeau did, and that comes right from Air Force One.”

“President Trump’s top economic adviser said on Sunday that Mr. Trump had pulled out of a joint statement with allies at the Group of 7 meeting over the weekend because a ‘betrayal’ by the Canadian prime minister had threatened to make Mr. Trump appear weak before his summit meeting on Tuesday with North Korea’s leader,” the New York Times reports.  “The adviser, Larry Kudlow, said that Mr. Trump had no choice but to take the action after Prime Minister Justin Trudeau said in a news conference that Canada would not be pushed around by the United States on trade.”

Said Kudlow: “He stabbed us in the back.”

How did Trudeau betray you?  By following through on a promise of retaliatory tariffs that he made before during and after the conference?  Donny and his advisers just cannot take someone not bowing down to him.

Sen. John McCain (R-AZ) reached out to U.S. allies in the aftermath of President Trump lashing out at the G7 summit.

McCain tweeted: “To our allies: bipartisan majorities of Americans remain pro-free trade, pro-globalization & supportive of alliances based on 70 years of shared values. Americans stand with you, even if our president doesn’t.”

France pledged to stand by the G7 summit statement disowned by President Trump and took a swipe at him by declaring that international cooperation could not depend on “fits of anger” or “little words,” Politicoreports.

Said the statement: “We spent two days to obtain a text and commitments. We will stand by them and anyone who would depart from them, once their back was turned, shows their incoherence and inconsistency.”

The most plusible explanations for Trump's pro-Russia behavior are also the scariest ones. How would it be different if he were getting marching orders directly from the Kremlin?https://t.co/NUrz9jf1AO

Director of National Intelligence Dan Coats told the Atlantic Council that Russia “is attempting to influence the midterm elections in the United States in November as well as divide the transatlantic alliance.”

Coats said Russia had already undertaken an “unprecedented influence campaign to interfere in the US electoral and political process” in 2016 and has also meddled in France, Germany, Norway, Spain, and Ukraine.

He added: “These Russian actions are purposeful and premeditated and they represent an all-out assault, by Vladimir Putin, on the rule of law, Western ideals and democratic norms.”

Here are the Trump links contained in a bombshell UK report exposing ties between two top Brexiteers and Russia https://t.co/70M85iEGZM

“Mitt Romney is mapping out plans to become a major player in the Senate — positioning himself to be the spokesman of a listless Republican Party establishment that’s been steamrolled by President Trump,” Politicoreports.

“The failed presidential candidate turned Utah Senate hopeful has made it clear to senior party officials that he intends to make a splash with his all-but-certain arrival on Capitol Hill next year… He’s conveyed a desire to be a loud voice on fiscal issues, railing against the ballooning federal deficit and how Congress approves last-minute spending bills. He’s expressed an interest in joining the foreign affairs committee, saying he wants to speak out on the importance of the country’s role abroad and the threat posed by Russia.”

“And his top aides have broached the prospect that Romney could tap into the expansive national fundraising network that he established during his 2012 presidential bid to bankroll GOP candidates.”

The Hill: “A ruling by a New York state judge this week said Trump can be deposed in the defamation lawsuit filed by Summer Zervos, the former contestant who has accused Trump of unwanted advances.”

“Some see the legal fight, which has received less publicity than other cases, as the most dangerous to Trump because it could lead to testimony where he’d risk lying or making a misstatement under oath.”

“Spare a moment, as you anticipate one of the most unusual summits in modern history, to consider North Korea’s leader as he left the all-encompassing bubble of his locked-down stronghold of Pyongyang on Sunday and stepped off a jet onto Singapore soil for his planned sit-down with President Trump on Tuesday,” the AP reports.

“There’s just no recent precedent for the gamble Kim Jong Un is taking.”

“As far as we know, his despot father only traveled out of the country by train, and rarely at that, because of fears of assassination. Kim, up until his recent high-profile summit with South Korea’s president on the southern side of their shared border, has usually hunkered down behind his vast propaganda and security services, or made short trips to autocrat-friendly China.”

“Residents of some blue states may get a surprisingly big tax cut thanks to workarounds state lawmakers are crafting to subvert a controversial new cap on deductions for state and local taxes,” Politico reports.

“It’s a little noticed and unexpected dynamic in the partisan battle over the recent tax overhaul. The new SALT cap has been one of the biggest flashpoints, with Democrats from high-tax states complaining they were targeted by congressional Republicans.”

“Now, months after the law passed, Republicans are having trouble convincing voters that they’re really going to benefit from the cuts the law enacted. Meanwhile, lawmakers in blue states are magnifying the cuts with their workarounds.”

Fellow Republicans, this is not who we are. This cannot be our party. https://t.co/xkGMYfoR9w

It is, Senator, because you and your Republican colleagues have done nothing to stop him.  Speeches and words do not count.  Action does.

“President Trump has gone overseas to embark on some of the most consequential diplomatic negotiations of his tenure, threatening an all-out trade war with allies and seizing a chance to make peace with a nuclear-armed menace,” the New York Times reports.

“But back home, he left behind a West Wing where burned-out aides are eyeing the exits, as the mood in the White House is one of numbness and resignation that the president is growing only more emboldened to act on instinct alone.”

“Mr. Trump, a former reality television star, may soon be working with a thinned-out cast in the middle of Season 2, well before the midterm elections… The turnover, which is expected to become an exodus after the November elections, does not worry the president, several people close to him said. He has grown comfortable with removing any barriers that might challenge him — including, in some cases, people who have the wrong chemistry or too frequently say no to him.”

“A miserable place to work.” — White House chief of staff John Kelly, quoted by the New York Times, telling senators what it’s like to work in the White House.

How Russia Sunk the West https://t.co/RGegvwWKuX

President Trump said that any agreement with North Korean leader Kim Jong Un at next week’s summit would be “spur of the moment,” Reuters reports.  Said Trump: “I have a clear objective, but I have to say – it’s going to be something that will always be spur of the moment. You don’t know. This has not been done before at this level.”  He added: “I think within the first minute I’ll know. Just my touch, my feel. That’s what I do.”

Meanwhile, Axios reports Trump “is willing to consider establishing official relations with North Korea and even eventually putting an embassy in Pyongyang.”

“Regardless of what happens in that meeting between the two dictators, what we are seeing right now ― this is history.” — “Fox & Friends” co-host Abby Huntsman, quoted by the HuffPost, on the summit meeting between President Trump and Kim Jong Un.

“Just tell us what Vladimir has on you. Maybe we can help.” pic.twitter.com/DLc7YJFXqT

Russian President Vladimir Putin said he was ready to meet President Trump as soon as Washington was ready, adding Vienna could be a possible venue for such a summit, AFP reports.

Said Putin: “As soon as the American side is ready this meeting would take place depending on my working schedule of course. The US president himself repeatedly said that he would consider such a meeting helpful. I can confirm this. It’s true.”

As #Trudeau's father said of Nixon, "I have been called worse things by better men."https://t.co/114sUfFVa6

David Leonhardt: “The alliance between the United States and Western Europe has accomplished great things. It won two world wars in the first half of the 20th century. Then it expanded to include its former enemies and went on to win the Cold War, help spread democracy and build the highest living standards the world has ever known.”

“President Trump is trying to destroy that alliance.”

“Is that how he thinks about it? Who knows. It’s impossible to get inside his head and divine his strategic goals, if he even has long-term goals. But put it this way: If a president of the United States were to sketch out a secret, detailed plan to break up the Atlantic alliance, that plan would bear a striking resemblance to Trump’s behavior.”