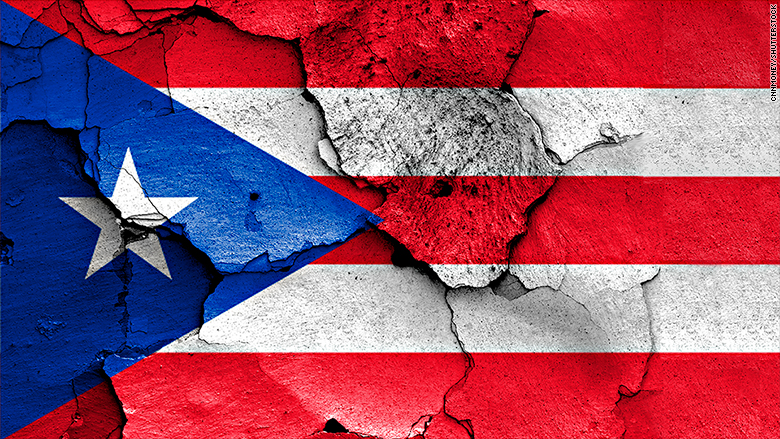 “At least 4,645 people died as a result of Hurricane Maria and its devastation across Puerto Rico last year, according to a new Harvard study released Tuesday, an estimate that far exceeds the official government death toll, which stands at 64,” the Washington Post reports.

A new survey of households in Puerto Rico indicates that Hurricane Maria might have been one of the most consequential natural disasters in recent American history, @fivefifths reports: https://t.co/bAOftA78Rx

In March '17, Trump objected to Sessions' decision 2 days earlier to recuse himself from the Russia probe. Trump berated Sessions, told him he should reverse course.

New York Times: “The confrontation, which has not been previously reported, is being investigated by the special counsel, Robert S. Mueller III, as are the president’s public and private attacks on Mr. Sessions and efforts to get him to resign. Mr. Trump dwelled on the recusal for months, according to confidants and current and former administration officials who described his behavior toward the attorney general.”

“The special counsel’s interest demonstrates Mr. Sessions’s overlooked role as a key witness in the investigation into whether Mr. Trump tried to obstruct the inquiry itself. It also suggests that the obstruction investigation is broader than it is widely understood to be — encompassing not only the president’s interactions with and firing of the former F.B.I. director, James B. Comey, but also his relationship with Mr. Sessions.”

“A new U.S. intelligence assessment has concluded that North Korea does not intend to give up its nuclear weapons any time soon, three U.S. officials told NBC News — a finding that conflicts with recent statements by President Trump that Pyongyang intends to do so in the future.”

“President Trump is continuing to pursue a nuclear summit with North Korean leader Kim Jong Un even though the CIA analysis, which is consistent with other expert opinion, casts doubt on the viability of Trump’s stated goal for the negotiations, the elimination of North Korea’s nuclear weapons stockpile.”

“In an odd twist, a list of potential concessions by North Korea in the CIA analysis included the possibility that Kim Jong Un may consider offering to open a Western hamburger franchise in Pyongyang as a show of goodwill.”

In an early morning tweet, President Trump accused special counsel Robert Mueller’s investigators of “meddling” in this fall’s midterm elections with their “rigged Russian witch hunt” because of a recent Republican resurgence in the polls. Shep Smith at Fox News proceeded to tear him apart:

Holy shit, Shep is on a roll today.

"Trump claimed Feds spied on his campaign … calls it Spygate. Fox News can confirm it is not. Fox News knows of no evidence to support the president's claim" pic.twitter.com/nMk7uNhuZU

Washington Post: “The White House communications director’s job has been vacant for exactly two months. But in practice, it has been filled since the day Hope Hicks said farewell to her unofficial replacement — President Trump himself.”

“The president also has unofficially performed the roles of many other senior staffers in recent months, leaving the people holding those jobs to execute on his instincts and ideas. And that’s exactly how Trump likes his West Wing.”

“Largely gone are the warring factions that dominated life at 1600 Pennsylvania Avenue in the first year of Trump’s term, replaced by solo players — many with personal connections to the president and their own miniature fiefdoms — laboring to do their jobs and survive.”

A new Emerson College poll finds Sen. Dianne Feinstein at 38% with no other candidate breaking double digits, and 32% of voters undecided.  While Feinstein receives about 59% of the Democratic vote, and is in a solid position to win the primary, there is a fatigue factor. When voters were asked if Feinstein, first elected to the Senate in 1992, should be re-elected, or was it time to give someone else a chance, 36% opted to re-elect Feinstein, while 47% said it was time for someone else.

Unraveling #Trump's spin blaming the Democrats for immigrant kids being separated from their parents. @ThePlumLineGS explains this "flatly false" spin is Trump trying to distance himself from an outlandish moral mess he has set in motion.https://t.co/aq7GkOdIgM

Josh Kraushaar: “But fundamentals matter—and so many of them are locked into the Democrats’ favor, big-time. It’s impossible to ignore the consistently supercharged Democratic turnout in election after election, from swing districts to those fought on conservative turf. Even if you look to the larger contests (like last year’s governor’s races) as a stronger indicator, the results are highly encouraging for the Democratic Party. If in our polarized times, Democrats simply win most GOP-held Clinton seats and pick off competitive open-seat races where Republicans retired, they’re well on their way to a narrow majority.”

“To that end, the results of an August special election outside Columbus, Ohio (home to National Republican Congressional Committee chairman Steve Stivers) will be a crucial test of whether Republicans have made gains in recent weeks. On paper, the exurban district is a bit more competitive than the Pittsburgh-area seat Republicans lost in an embarrassing upset two months ago. But Republicans also nominated their strongest candidate as their standard-bearer—state senator Troy Balderson—giving them no excuses if they badly underperform again. Early polling suggests the race between Balderson and Democratic Franklin County Recorder Danny O’Connor will be highly competitive.”

so glad @mckaycoppins' definitive profile of Stephen Miller is out. "What happens when right-wing trolls grow up to run the world?" https://t.co/OnxgUshEWg

Bloomberg: “Bannon’s deployment of the psychological-operations firm Cambridge Analytica in the 2016 campaign drew fresh attention this month, when a former Cambridge employee told a U.S. Senate panel that Bannon tried to use the company to suppress the black vote in key states. [Bruce] Carter’s story shows for the first time how an employee at Bannon’s former news site worked as an off-the-books political operative in the service of a similar goal.”

“Carter’s recollections and correspondence, which he shared after a falling-out with his fellow Trump supporters, provide a rare look inside the no-holds-barred nature of the Republican’s campaign and how it explored new ways to achieve an age-old political aim: getting the right voters to the polls—and keeping the wrong ones away.”

An openly gay student wasn’t allowed to give the valedictory speech at his graduation.

His school's diocese said the speech was "inconsistent with the teaching of the Catholic Church."

So he delivered the speech after the ceremony with a megaphone. https://t.co/lIRqmpurI1

Wilbur Ross “was brought into the administration as one of President Trump’s ‘killers’ – but in recent months, the commerce secretary has been increasingly marginalized, with his agency widely seen in the White House as a mess,” Politico reports.

“Trump himself has lashed out at Ross in Oval Office meetings, telling the man who once helped bail him out in Atlantic City that he’s ‘past his prime’ and ‘no longer a killer’ and trying to bench him from making trade deals… Despite being one of the administration’s leading protectionist voices early on, Ross was initially left off a May trade delegation to China led by Treasury Secretary Steven Mnuchin.”

“But now Ross is heading back to China in early June in hope of cutting some type of trade deal that delivers on Trump’s campaign promises to extract concessions from Beijing on behalf of American workers.”

Former Obama adviser Valerie Jarrett responded Tuesday to the the racist comment Roseanne Barr made about her, and which led to the cancellation of Barr’s sitcom reboot on ABC.  “I think we have to turn it into a teaching moment,” Jarrett said during an appearance on the MSNBC special “Everyday Racism In America,” a clip of which the network aired Tuesday.

“I’m fine,” Jarrett continued. “I’m worried about all the people out there who don’t have a circle of friends and followers who come right to their defense: the person who’s walking down the street minding their own business and they see somebody cling to their purse or want to cross the street, or every black parent I know who has a boy who has to sit down and have a conversation, ‘the talk’ as we call it.”

“As you say, those ordinary examples of racism that happen every single day. And I think that’s why I’m so glad to be here this evening talking with all of you.”

Barr on Tuesday tweeted of Jarrett: “Muslim brotherhood & planet of the apes had a baby=vj.”

If you didn’t know Roseanne was prone to conspiracy theories and racism, you haven’t been paying attention. https://t.co/SUp6EtJ9m0

Rick Klein: “Trump’s visit Tuesday to Nashville highlights the unmistakable trend: There is virtually no room between Trump and the Senate candidates hoping to maintain his Republican majority this year. And Republicans appear far more comfortable touting Trump’s leadership than Democrats do arguing against it.”

“Trump claimed that his sway drove Sen. Bob Corker from running for another term in Tennessee, and kept him out when he flirted with returning after all.”

“In his place is Rep. Marsha Blackburn, who faces only nominal opposition in August’s GOP primary. She is set to join nominees who have already emerged out of states including Indiana, Ohio, Pennsylvania, and West Virginia, by winning fights that centered on who the most staunch Trump loyalist would be.”

A new study finds a correlation “between white American’s intolerance, and support for authoritarian rule. In other words, when intolerant white people fear democracy may benefit marginalized people, they abandon their commitment to democracy,” NBC News reports.

“The World Values Survey data used is from the period 1995 to 2011 — well before Donald Trump’s 2016 run for president. It suggests, though, that Trump’s bigotry and his authoritarianism are not separate problems, but are intertwined. When Trump calls Mexicans “rapists,” and when he praises authoritarian leaders, he is appealing to the same voters.”

Daily Beast: “Broadsides against his predecessor are nothing new for Trump. Nor are the false and misleading suggestions that President Obama snooped on him during his campaign. In early 2017, Trump very publicly, and erroneously, accused Obama of wiretapping him in 2016.”

“What stood out about the weekend’s salvo was the vitriol, perhaps panic, behind it and the frostiness it underscored about the relationship between the two most recent Oval Office occupants.”

“According to two White House officials, Trump has been privately wondering whether Obama is actively working behind the scenes to undermine or undercut his presidency. And he’s done so without bothering to pick up the phone to ask or confront his predecessor. Obama and Trump have not spoken since the inauguration.”

First Read: “On the GOP side, President Trump has endorsed Republican John Cox for governor, trying to unite California Republicans around a single candidate, which could help drive turnout in the House and downballot races… In addition, House Republicans have opened an office in Southern California to spur GOP turnout in the three key House districts.”

“On the Democratic side, the DCCC has been airing TV ads both in favor of their preferred candidates in these crowded primaries (see here and here) and against Republican candidates (see here and here). And while House Democrats want two Democrats at the top of the ticket for governor – to drive Dem turnout and depress the GOP’s – gubernatorial frontrunner Gavin Newsom prefers a Republican opponent, since someone like fellow Democrat Antonio Villaraigosa represents a greater general-election threat than either of the two leading GOP candidates (Cox and Travis Allen).”

“What’s fascinating about all of these races is that they’re essentially margin-of-error contests to make the Top 2, where candidates in positions No. 2, No. 3 and even No. 4 are separated by just a handful of points in the public and private polling. All of which makes the June 5 primaries – and the strategies going into them – quite a game.”

With a constitutional crisis looming in Italy — and trade war brewing between the U.S. and China — the Dow tumbled 390 points Tuesday https://t.co/BPx636KzEv