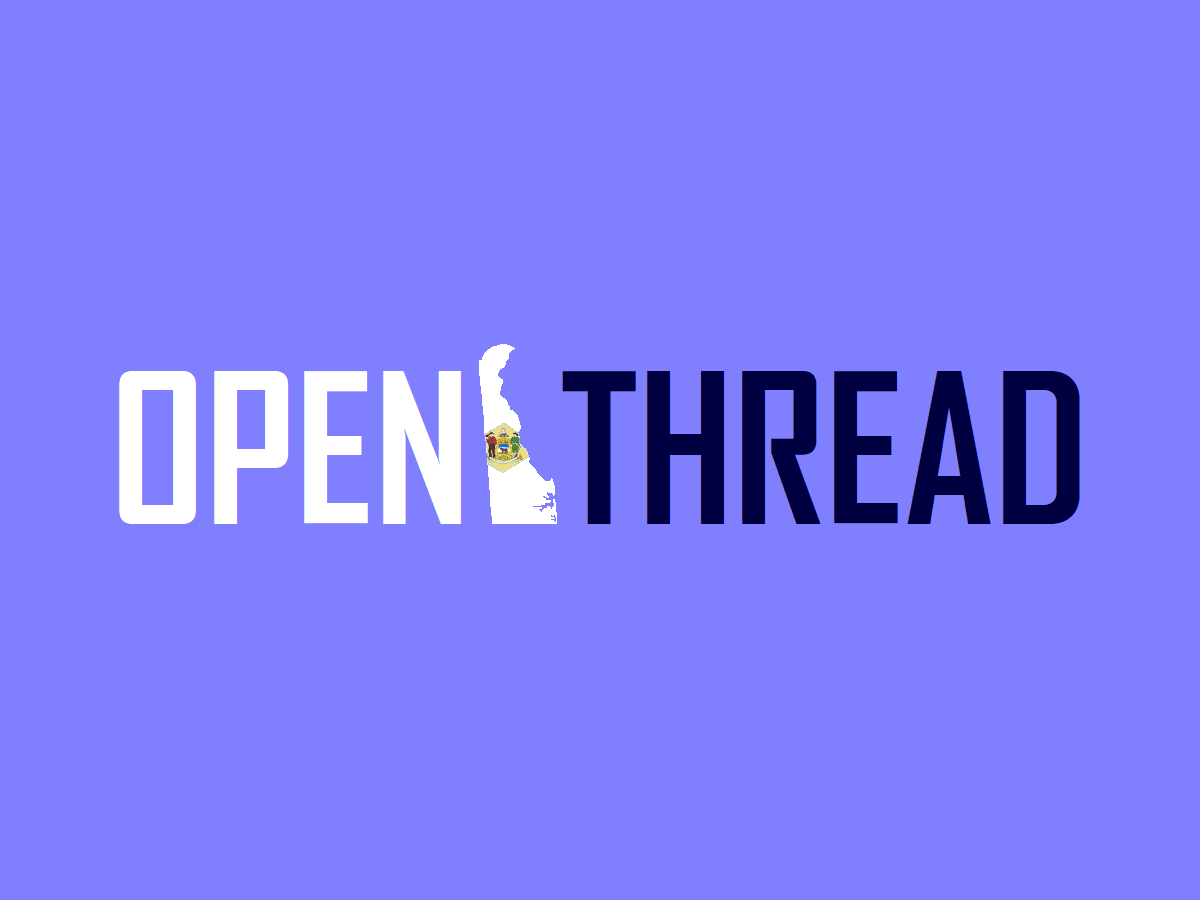 “President Trump’s attempt to blame Democrats for separating migrant families at the border is renewing a political uproar over immigration, an issue that has challenged Trump throughout his presidency and threatens to grow more heated as he imposes more restrictions to stem the flow of illegal immigration,” the Washington Post reports.

“In one of several misleading tweets during the holiday weekend, Trump pushed Democrats to change a ‘horrible law’ that the president said mandated separating children from parents who enter the country illegally. But there is no law specifically requiring the government to take such action, and it’s also the policies of his own administration that have caused the family separation that advocacy groups and Democrats say is a crisis.”

As it turns out, @frontlinepbs has been all over the unaccompanied minor immigrants story, and it's pretty grim. https://t.co/UPVmzgoOcC

“Judges appointed by Republican presidents gave longer sentences to black defendants and shorter ones to women than judges appointed by Democrats, according to a new study that analyzed data on more than half a million defendants,” the New York Times reports.

“The study was conducted by two professors at Harvard Law School, Alma Cohen and Crystal S. Yang. They examined the sentencing practices of about 1,400 federal trial judges over more than 15 years.”

"President Trump is the leader of the United States. He is also a liar. This has been well-documented. Lying was a big part of his business strategy … Now, as commander in chief, he misleads the public constantly": @brianstelter discusses the media calling a lie a lie pic.twitter.com/KEgbPLywx8

“Poland wants a permanent U.S. military presence — and is willing to pony up as much as $2 billion to get it,” Politico reports.

“The Polish offer reflects a long-standing desire in Warsaw to build closer security relations with the U.S. and put American boots on the ground. The push dates back to Poland’s entry into NATO in 1999, but has taken on added urgency in the wake of Russia’s annexation of Ukraine’s Crimea region four years ago and aggressive posture toward the alliance.”

The inside story of how TMZ got behind Trump, including Harvey Levin's frequent phone calls with Trump during the 2016 election https://t.co/m7S3sViSez

David Leonhardt says Democrats are running a smart populist campaign: “Democrats are more united than many people realize — and are running a pretty smart midterm campaign…Yes, there are some tensions on the political left. But these tensions — over Obama-style incrementalism vs. Bernie-style purism, over the wisdom of talking about impeachment, over whether to woo or write off the white working class — are most intense among people who write and tweet about politics. Among Democrats running for office, the tensions are somewhere between mild and nonexistent.”

Trump is sinking in scandal, but has drawn political strength from his willingness to destroy institutions—including his own party. https://t.co/F5rnChpuxy pic.twitter.com/ISGA85QOSr

“Today the Democrats unveiled a new plank in their Better Deal agenda, an anti-corruption platform that both depicts the broken nature of the political system and puts reform at the forefront of any campaign to give regular people a voice in our democracy. It brings together the anti-Trump and populist-economics messages in a way that makes them inextricable,” writes David Dayan in his article “Democrats’ New Midterm Approach: It’s the Corruption, Stupid” at The Nation.

“The agenda has three main components: voting rights, campaign-finance reform, and ethics laws. Democrats have been focused on the first two for a long time; both are critical to restoring a democracy where everyone counts…With ethics reform, the Democrats’ focus is unusually prominent, most directly attacking the era of outsize Trump corruption. Much of the agenda codifies into law concepts that had been unwritten rules, and it strengthens the Office of Government Ethics, whose only weapon currently is a kind of moral opprobrium, with stepped-up policing authority. It includes requiring that any lobbying conduct be publicly reported—what Senator Chuck Schumer calls closing the “Cohen loophole”—rewriting the bribery statutes to more broadly encompass corrupt self-dealing, and cementing that the president is not exempt from conflict-of-interest laws.”

"As the oldest Millennials approach 40 years old, the prospect of trying to raise children while also investing in a 401K and a mortgage and paying $2000/month in health insurance is less a challenge than a sick joke." https://t.co/nfvrfdp63z

Osita Nwanevu on long term strategy for Democrats, and notes that “it’s well past time to consider whether it’s any less quixotic to believe that the deep problems of the American economy—rising inequality, stagnant wages, long-impoverished communities, a vast racial wealth gap, and more—can be solved by the same package of tax credits, job training, and cheapskate safety net policies the Democratic Party has been offering for more than a quarter-century now.”

It is moreover a certainty that the most urgent problem facing America and the world today—climate change—can only be addressed by significant and unprecedented state intervention in the economy…In sum, Democratic leaders are probably right to believe that they can eke out marginal victories with moderate candidates in the near term. But the threat of a 2010 will follow every attempt to recreate 2006 and 2008, and an electoral strategy dependent on moderate and conservative candidates will undermine efforts to pass the policies Democrats will ostensibly want to win elections for in the first place, as was the case with the ACA and other fights early in the Obama administration. As it stands, the Democratic Party is likely to do well in November whether it adopts a long-term vision for itself and the country or not. Winning the midterms will be relatively easy. Winning the century will be harder.”

Will Bunch: “This is how America ends as any kind of force for good. With a yellow bracelet.  I’ve been thinking about a 36-year-old Guatemalan woman named Alma Jacinto and her two boys, ages 8 and 11, as I try to comprehend the rapidly accelerating human-rights outrage taking place along America’s southern border. To be clear, the story of how the United States mistreats migrant families, so desperate for a better life, can be a confusing tale — especially as emotions flare on social media. It’s a discussion that can get bogged down in the evil banality of bureaucrats and in statistics — especially the 1,475 children that government agents took, and then lost track of — that generate shock yet somehow don’t do justice to the everyday inhumanity.

That’s why I’m grateful for the on-the-ground journalism of Curt Prendergast and Perla Trevizo of the Arizona Daily Star (local reporting matters, people) that put a human face on a horrible Trump administration “zero tolerance” policy by showing us the terror and the tears of Jacinto as the detained border crosser left the Tucson courtroom where a magistrate couldn’t answer her questions about where her two boys were going or when she would see them again.”

Michael Cohen says our President is a bigot: “In addition to all this, Trump has referred to white supremacists as “very fine people.” He’s questioned whether President Obama was born in the United States. He pardoned Sheriff Joe Arpaio, who had been held in criminal contempt by a federal court for unlawfully targeting and racially profiling Hispanics.  I could go on, but you get the idea.

The context for Trump’s comments is actually quite clear: The president is a vile bigot. He regularly demonizes and scapegoats immigrants and persons of color. He uses isolated examples of crime committed by immigrants and Muslims to justify racist policies that seek to limit nonwhite Americans from entering the country – and deport those who are already here. He’s done this repeatedly since he announced his candidacy for president, in June 2015.”

Thunderous boos rained across the stadium.

“As a candidate, Donald Trump claimed that the United States government had known in advance about the Sept. 11 attacks. He hinted that Antonin Scalia, a Supreme Court justice who died in his sleep two years ago, had been murdered. And for years, Mr. Trump pushed the notion that President Barack Obama had been born in Kenya rather than Honolulu, making him ineligible for the presidency,” the New York Times reports.

“None of that was true.”

“Last week, President Trump promoted new, unconfirmed accusations to suit his political narrative: that a ‘criminal deep state’ element within Mr. Obama’s government planted a spy deep inside his presidential campaign to help his rival, Hillary Clinton, win — a scheme he branded “Spygate.” It was the latest indication that a president who has for decades trafficked in conspiracy theories has brought them from the fringes of public discourse to the Oval Office.”

“Now that he is president, Mr. Trump’s baseless stories of secret plots by powerful interests appear to be having a distinct effect. Among critics, they have fanned fears that he is eroding public trust in institutions, undermining the idea of objective truth and sowing widespread suspicions about the government and news media that mirror his own.”

Serious implication of today's outburst: if God forbid the day ever comes when America needs the president to speak for the whole country – Trump will not and cannot do it. https://t.co/uQyHB1MXGq

Rep. Thomas Garrett (R-VA) announced “that he is struggling with alcoholism and will abandon his run for a second term in Congress so he can focus on recovery and his family,” the Washington Post reports.

“Garrett, a member of the conservative Freedom Caucus, is the 48th Republican to retire or announce they will not seek reelection to the House this year, according to a list maintained by the House Press Gallery.”