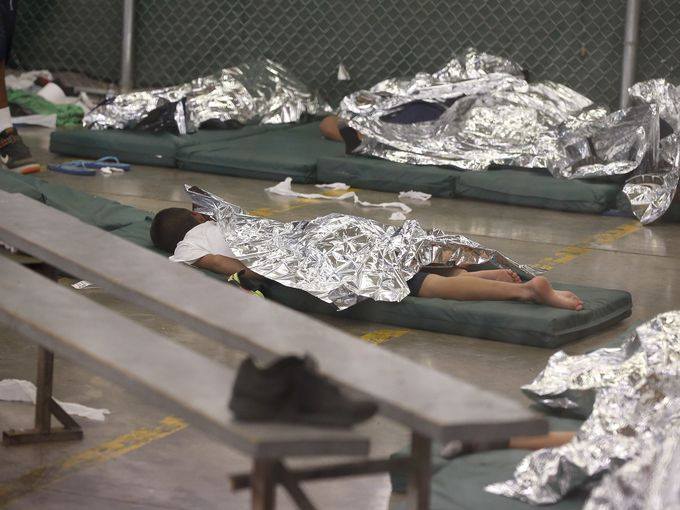 The Arizona Republic published a series of photos of children being detained in holding cells after being separated from their parents who entered the country illegally.

I saw this photo floating around and didn’t know if it was real.

Children of immigrants are being held in cages, like dogs, at ICE detention centers, sleeping on the floor. It’s an abomination.

Jonathan Swan: “Shortly after word leaked that Kelly Sadler had taken a nasty shot at John McCain, President Trump convened a meeting in the Oval Office for a tiny group of communications staffers, according to sources familiar with the gathering. Sadler, Mercedes Schlapp, Raj Shah, and John Kelly all gathered in front of the Resolute Desk for a conversation with Trump about the leaking problem. They were the only people in the room, though the door to the outer Oval was open.”

“The president told Sadler she wouldn’t be fired for her remark. He added, separately in the conversation, that he’s no fan of McCain. Then Trump, who had grown obsessed with the leaking problem, told Sadler he wanted to know who the leakers were. Sadler then stunned the room: To be completely honest, she said, she thought one of the worst leakers was Schlapp, her boss.”

“Schlapp pushed back aggressively and defended herself in the room. And in follow up conversations after the meeting, some of Schlapp’s colleagues also came to her defense…. Sadler went on to name other people she also suspected of being leakers.”

4. I've obtained audio of the WH press briefing. You can hear Raj Shah, Deputy Press Secretary, introduce Pottinger (along with the terms – which are standard) and then Pottinger makes the statement that POTUS says was never made. Lots of reporters in briefing room and on phone. pic.twitter.com/2gEYkRSyTv

Rudy Giuliani essentially admitted in a CNN interview with Dana Bash that special counsel Robert Mueller has likely discovered and will likely report potentially impeachable offenses.  As a result, Giuliani said the White House was waging a campaign against the Mueller probe in an effort to delegitimize the investigation in the eyes of voters and lawmakers in Congress.

“BASH: This is an intentional strategy to undermine the investigation, knowing that they, the investigators, the special counsel, it’s their policy not to talk. But you are very free to and are very aggressive about doing so.

GIULIANI: Well, I mean, they’re — they are giving us the material. I couldn’t do it if I didn’t have the material. They are giving us the material to do it. We are defending — to a large extent, remember, Dana, we are defending here, it is for public opinion, because eventually the decision here is going to be impeach, not impeach. Members of Congress, Democrat and Republican, are going to be informed a lot by their constituents. So, our jury is the American — as it should be — is the American people.”

Giuliani also slammed special counsel Robert Mueller’s  investigation as “illegitimate,” Politico reports.  Saying there’s no evidence of collusion between Trump and Russia, Giuliani argued of Mueller that “the basis on which he was appointed is illegitimate.”

Trump blames Dems for his own policy of separating families at the border https://t.co/LHnqnrbxCg pic.twitter.com/6y3SbEE01p

Dana Millbank: “To peruse the coverage of the Democratic primaries of 2018, you’d think there was a battle royale within the Democratic Party: insurgent vs. establishment, Bernie vs. Hillary, progressive vs. moderate, grass roots vs. party bosses.”

“There’s been mention of a ‘battle between progressives and moderates’ (the Guardian), a Democratic ‘identity crisis’ (The Post), a ‘full-blown Democratic war’ (CNN), a ‘civil war’ (Fox News) and a ‘fight for the future of the Democratic Party; (BuzzFeed).”

“But if a civil war has been declared, somebody forgot to tell Democratic voters. They are stubbornly refusing to view 2018 through the progressive/moderate, insurgent/establishment lens…. Overriding all other considerations this year in Democratic voters’ minds (and candidates’ messages) is stopping President Trump and his congressional enablers.”

President Obama is wrong. We don't need unity to save democracy. We just need to disempower Republicans the way we did in California.https://t.co/5JKY594Eqf

A new HuffPost/YouGov poll finds that 48% of Republicans believe that up to 5 million people voted illegally in the last presidential election ― a claim that President Trump has repeatedly made, even though neither he nor anyone else has produced concrete evidence to show it’s true.  Just 17% said they do not believe that claim and 35% said they were unsure.

Sen. Marco Rubio (R-FL) told ABC News that he sees “no evidence” to support claims that the FBI used an informant to gather information on the Trump campaign, but that instead the federal probe was focused on “individuals with a history of links to Russia that were concerning.”

Democrats have been out-fundraising scores of Republican candidates in the midterms—and so campaign-finance reform may now be in the interest of a more populist GOP, @reihan argues: https://t.co/LzGzqNcjKK

Sen. Jeff Flake (R-AZ) told NBC News the would not rule out challenging President Trump in the Republican primary in 2020.  Said Flake: “It’s not in my plans but I have not ruled anything out.”  He added: “I do hope that somebody runs on the Republican side other than the president, if nothing else than simply to remind Republicans what conservatism is and what Republicans have traditionally stood for.”

A timeline of Trump associates asking for dirt on Clinton from WikiLeaks and/or Russia: https://t.co/MwhAwUmsCy

“The Supreme Court is heading into the final month of its term, facing decisions on gerrymandering, unions, gay rights, abortion and President Trump’s travel ban,” the Los Angeles Times reports.  “This term’s best-known case is a culture wars clash that pits equal rights for gay customers against a claim of religious liberty from a Christian store owner. It is one of three major cases that feature a ‘compelled speech’ claim from conservatives who object to liberal state laws. The others involve union fees and California’s required disclosures for crisis pregnancy centers.”

“The justices are expected to announce decisions on the first day of every work week between now and the end of June, and then adjourn for the summer.”

My read of @danbalz's sober & thoughtful take:#Trump's lies, distortions & attacks on the #Mueller probe are aimed almost entirely at Republicans. He figures he can survive if the GOP stays supine & the base loyal. He's willing to tear the country apart.
https://t.co/cNEpo0GZVB

President Trump tweeted that the Russia probe has “devastated and destroyed” the reputations of people, continuing his weekend Twitter assault against the Robert Mueller investigation into Russian interference in the 2016 election, Politico reports.  Said Trump: “Who’s going to give back the young and beautiful lives (and others) that have been devastated and destroyed by the phony Russia Collusion Witch Hunt? They journeyed down to Washington, D.C., with stars in their eyes and wanting to help our nation. … They went back home in tatters.”

That tends to happen to traitors and criminals when they are caught: their lives are destroyed, and they will have deserved it.

Trump thinks more people should respect the suffering of his wide-eyed staff amid the Russia investigation, so here's a look back https://t.co/MrQruLZAYy

“A team of U.S. officials crossed into North Korea on Sunday for talks to prepare for a summit between President Trump and Kim Un, as both sides press ahead with arrangements despite the question marks hanging over the meeting,” the Washington Post reports.

New York Times: “In a sign of just how important the summit is to Mr. Kim, he held an unexpected meeting on Saturday with President Moon Jae-in of South Korea, where he expressed a ‘fixed will’ to try to salvage it.”

“The measured response to the cancellation, and the extraordinary diplomatic scramble that followed, was a strong reminder, analysts said, that Mr. Kim not only wants a diplomatic deal with the United States. He may need one.”

.@UriLF has the backstory on how South Korea nearly brought Trump and Kim together—and why it still might: https://t.co/kaGvvZEkGo

Jonathan Swan: “Trump is getting back on the campaign trail, hitting rallies in the states where he’s still fairly popular, and raising money for select Republican candidates heading into November’s midterm elections. He’s been doing this sporadically since inauguration, but the pace is quickening.”

“This week, Trump hits two states for campaign-style events: He flies to Nashville on Tuesday for a political rally and a fundraiser for Marsha Blackburn, who’s running for the Senate in Tennessee. On Thursday, Trump holds fundraisers in Dallas and Houston.”

However: “Some vulnerable Republican House candidates have told Trump’s advisers that it would be harmful, not helpful, if the president visited their districts.”

Fresno Bee: “Rep. Devin Nunes’ big role in the unfolding drama between Justice Department and the Trump administration has drawn national headlines — and allowed him to collect big money from D.C. area donors. But the California Republican is also being dogged by accusations he’s no longer focused on his constituents.”

“Of the more than $1 million Nunes raised from individual donors, roughly $19,000, or 2 percent, came from people in his district, which includes chunks of Fresno and Tulare Counties. That’s the smallest percentage of any the eight California Republicans in Congress who Democrats are targeting for defeat this fall.”

Executives of big U.S. companies suggest that the days of most people getting a pay raise are over, and that they also plan to reduce their work forces further. https://t.co/V0BXg0CmEI