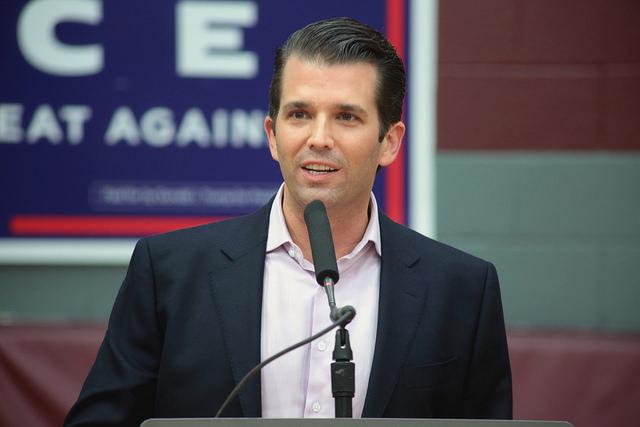 “The FBI has obtained secret wiretaps collected by Spanish police of conversations involving Alexander Torshin, a deputy governor of Russia’s Central Bank who has forged close ties with U.S. lawmakers and the National Rifle Association, that led to a meeting with Donald Trump Jr. during the gun lobby’s annual convention in Louisville, Ky., in May 2016,” Yahoo News reports.

“José Grinda, who has spearheaded investigations into Spanish organized crime, said that bureau officials in recent months requested and were provided transcripts of wiretapped conversations between Torshin and Alexander Romanov, a convicted Russian money launderer.”

Said Grinda: “Just a few months ago, the wiretaps of these telephone conversations were given to the FBI. Mr. Trump’s son should be concerned.”

Tom Toles is right to suggest that this peddling of conspiracy theories by Fox News is why “we can’t just discuss things like reasonable adults.”

“This is jaw-droppingly beyond irrational. This is a rusty razor being violently drawn back and forth across the throat of American discourse. No, there is no way to have a normal discussion with these people. They are using their words and their platform to poison not just discourse but American justice itself. […]

This is not a conversation that is possible to pursue. They have made into a zero-sum, us-vs.-them battle for power.

So a battle for power it will be.”

“Sensing such a move, top Democrats and at least one Republican on Friday said the White House’s decision was tantamount to a bailout of a large Chinese company with little benefit for the United States.”

NBA coach Steve Kerr slams the NFL over its new policy, saying the league is "basically trying to use the anthem as fake patriotism… scaring people. It's idiotic, but that's how the NFL has handled their business." https://t.co/i3uD4PnvU8 pic.twitter.com/P2qPQYmrjH

“First lady Melania Trump, who spent five nights in the hospital following a kidney procedure, has been out of public view for 15 days running — an unusually long absence even for a first lady who relishes life outside the spotlight,” the Washington Post reports.

“Although medical experts have said the kind of procedure the first lady had typically requires only a night’s hospitalization, White House and East Wing aides have said nothing more about her condition and instead asked for privacy.”

Republicans have used control of the judiciary to motivate the GOP base in recent elections. Democrats should do the same with Medicaid.https://t.co/lNFMSXSvEP

With a month elapsed since President Donald Trump sent 1,600 troops to the U.S. Mexico border, the president of the border patrol union is calling the move “a colossal waste of resources,” according to a Thursday Los Angeles Times report.

“When I found out the National Guard was going to be on the border I was extremely excited,” union president Brandon Judd told the Times, adding that past deployments have lifted the heavy workload for stationed officers. “That has not happened at all” with Trump’s deployment, he added. He reportedly said that the National Guard’s effectiveness has significantly dropped off from past deployments since this time, they must stay out of the “public eye” and can’t even man lookout posts.

“We generally support the administration, but we’re not going to be cheerleading when things are not going well,” Judd told the Times.

Moderate Republicans need just 5 more signatures to force votes on DACA, but 3 of those are Democrats: Texas Reps. Cuellar, Vela & Gonzalez, who don’t want to vote on bills that would fund Trump’s border wall https://t.co/NL1864hCiS

Norman Eisen and Elizabeth Holtzman say Donald Trump should not assume he’s above the law. A sitting president can be indicted.

“That brings us to the ultimate reason that Giuliani and the president would be unwise to rely on the Justice Department policy. Even if Mueller did acknowledge that as special counsel he cannot indict the president, as Giuliani claims, that is not definitive. Deputy Attorney General Rod Rosenstein may give him permission to override that limit.

The special counsel regulations and the authority Rosenstein enjoys as acting attorney general over this matter allow him to make that decision. Because of the legal infirmities of the OLC opinions we have described, that outcome cannot be considered off the table. Then it would be for the courts to resolve, and as we have shown, they have been hostile to similar presidential claims.

Make no mistake — we are not suggesting that the forbearance on prosecution that Jaworski and Starr demonstrated is a bad model for Rosenstein and Mueller. The indictment of our democratically elected leader would be an unprecedented and somber moment for our democracy.

Instead, we are arguing that pursuing an indictment of a sitting president is a last resort that is entirely consistent with our constitutional values and democratic norms. It should be on the table not because it is a perfect option, but rather because it is preferable to a world in which our president is above the law and can engage in criminal conduct with impunity.”

Trump is openly looting the country, and there's no one to stop him.https://t.co/rfJ7uHmBz7

“Mr. Mueller’s interest in the presentation suggests his investigation is focusing on the role of social-media manipulation during the 2016 campaign… The presentation consists of nine slides and was prepared by the Psy-Group, a firm that boasts of ties to elite Israeli intelligence agencies.”

Trump has attacked the FBI, Comey, Mueller, the “witch hunt” & the “deep state” in more than four dozen tweets since April. He's criticized Putin once.
I asked @JohnBrennan @MichaelJMorell @DavidKris11 & others to weigh in on Trump's war on the FBI and IC: https://t.co/HVlLqHbFFl

New York Times: “With so many Democrats running, the party’s fear is that the vote will be splintered, allowing Republicans — who have fewer candidates — to dominate some primaries. The party and allied groups are spending more than $4 million on just three campaigns, intervening in one contest to prop up a favored candidate; attacking a Republican from the right in another; and even reminding people not to waste their votes on “ghost candidates” who have dropped out yet remain on the ballot.”

“The ‘top two’ system was meant to create incentives for political moderation in a state where about a quarter of the voters are independents, but it has created immense stakes for Democrats: They need to win 23 seats to take back the House, and party officials believe the path runs through the seven competitive California districts, all of which Hillary Clinton carried in 2016.”

The Korea fiasco is evidence that the walls are closing in on Trump foreign policy https://t.co/VI0VBnor4b

Trump's response to the outrage over the mistreatment of immigrant children was some weapons-grade nonsense https://t.co/B6XAGvFQao

“The White House formally drove a dagger into the passage this year of the kind of massive infrastructure package called for by President Trump,” Roll Call reports.

“What is on the White House’s legislative agenda for the rest of the year includes another tax package, a farm bill, more federal judiciary nominations — and possibly immigration legislation.”

“White House legislative affairs chief Marc Short told reporters Friday that infrastructure will slide into 2019. He blamed election-year politics, saying Democrats have signaled in recent conversations they are uninterested in handing Trump a victory ahead of the midterm elections.”

A meditation on Stacey Abrams and the past and future of biracial Democratic coalitions in the South. https://t.co/aukjYvFAUt