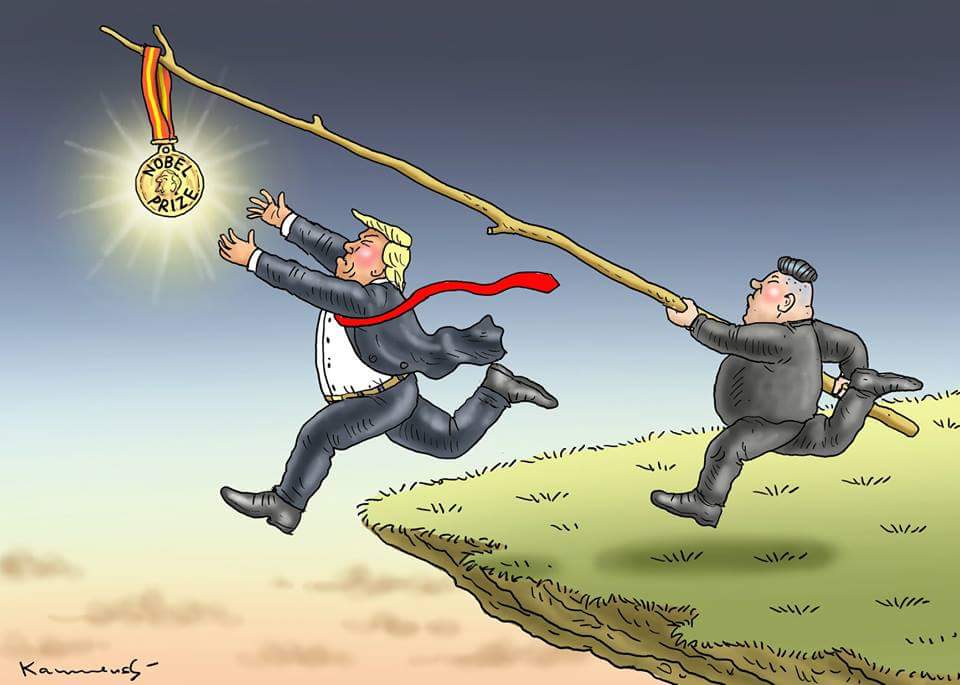 “President Trump has notified Kim Jong-un, the North Korean leader, that he has canceled their much-anticipated meeting, which was set for June 12,” the New York Times reports.  In a letter to Mr. Kim, the American president said he would not attend the summit due to “tremendous anger and open hostility displayed in your most recent statement.”  He was referring to recent comments from a North Korean official who described Vice President Mike Pence as “ignorant and stupid.”  You can read the full letter from Trump to Kim here.

Axios: “Markets fell sharply on the news, and tensions with Pyongyang are likely to ratchet up — and quickly.”

The only real question about the now-canceled Trump-Kim summit is why so much of the press spent so long being so credulous about a pile of obvious bullshit? https://t.co/cc2JH5PcKr

“Early Thursday morning, after a flurry of calls with a handful of senior advisers, an angry President Donald Trump personally dictated the three-paragraph letter to North Korean leader Kim Jong Un that cancelled the scheduled summit between their two nations,” NBC News reports.   “It had been less than 12 hours since Trump and his team began grappling intensely with the prospects for shelving what would have been an historic meeting between the two heads of state.”

“But the president, fearing the North Koreans might beat him to the punch, wanted to be the one to cancel first.”

Washington Post: The inside story into how Trump’s summit fell apart.

POLLING. A new Gallup poll finds that 41% of Americans “strongly disapprove” of the job Donald Trump is doing as president, and 26% strongly approve — almost exactly the same percentages as Gallup found 15 months ago, in the first weeks of his presidency.

“The percentage of Americans who strongly disapprove of the job Trump is doing is one of the highest for any president in the history of the Gallup ‘strongly’ question… Only two presidents have had higher strong disapproval ratings.”

Trump: "maybe" people who don't stand for the National Anthem "shouldn't be in the country." pic.twitter.com/vUaFlO5NNv

MUELLER. “Special counsel Robert Mueller is fighting a drive by media organizations to unseal secret court filings relating to searches and surveillance efforts undertaken as part of the investigation into possible coordination between the Trump campaign and Russia in the 2016 election,” Politico reports.

“While lawyers for President Trump have suggested in recent weeks that the inquiry appears to be winding down, Mueller’s prosecutors submitted a court filing on Wednesday that painted a very different picture of an investigation that is moving forward on multiple fronts and could be jeopardized by premature disclosure of the records sought by news outlets.”

IMMIGRATION. “House Republican leaders have at least temporarily blunted an internal rebellion to force votes next month on protecting young undocumented immigrants from deportation while they negotiate with the GOP renegades on an alternate path forward,” the Washington Post reports.

“But with conservatives and moderates far apart on crucial provisions, there was little sign Wednesday that the warring factions would be able to reach a workable agreement on a compromise immigration bill.”

It is huge news that former DNI James Clapper has now flatly stated that Russia did swing the election to Trump.

We cannot *know* if this is true.

But it puts Trump/GOP efforts to suppress the truth about 2016 in a new, uglier light.

TEACHER’S SALARIES.  “Responding to teacher walkouts across the country, congressional Democrats on Tuesday proposed raising teachers’ salaries by canceling the tax cut for the nation’s top 1 percent of earners,” the AP reports.  “The Republican-controlled Congress was unlikely to support the idea of giving states and school districts $50 billion over a decade to fund the teacher raises at the expense of dismantling the hard-won tax bill.”

“But the proposal gives Democrats an issue they can use ahead of the November midterm elections. Teachers have won widespread support, even in conservative areas, as they complain about low pay.”

NUNES.  In an interview with the Fresno Bee, Rep. Devin Nunes (R-CA) was asked if he planned to host any local forums or town hall meetings.  Responded Nunes: “Your paper is a joke to even bring these issues up or raise these issues.”

TRUMP TARIFFS. “The Trump administration is using national-security laws to consider imposing new tariffs on vehicle and auto-parts imports… President Trump is asking for new tariffs of as much as 25% on automobile imports…  after he repeatedly signaled his intention to impose such tariffs,” the Wall Street Journal reports

“Mr. Trump has asked his team to investigate using a legal provision of the 1962 Trade Expansion Act to find whether tariffs or other restrictions are needed on imported cars. It is the same legal justification the administration used to impose tariffs on steel and aluminum imports in March.”

What exactly is Donald Trump trying to distract FROM? It can be hard to keep track. So here's a guide to 15 unanswered questions about the true Trump scandals. No imaginary spies here https://t.co/KPJHhxVx07

LSD NUCLEAR GUARDS.  “One airman said he felt paranoia. Another marveled at the vibrant colors. A third admitted, ‘I absolutely just loved altering my mind.’”  “Meet service members entrusted with guarding nuclear missiles that are among the most powerful in America’s arsenal. Air Force records obtained by the Associated Press show they bought, distributed and used the hallucinogen LSD and other mind-altering illegal drugs as part of a ring that operated undetected for months on a highly secure military base in Wyoming. After investigators closed in, one airman deserted to Mexico.”

RICO 101.  Vanity Fair: “The Trump camp’s witch-hunt talking points are now dominating the news—but the media battle may be the wrong way to beat Mueller.”

Said a former FBI official: “This investigation is classic Mueller: he is doing a classic, organized crime case. This is RICO 101, working your way up and sideways. You pop a few guys for gambling, and no one is going to do a million years for gambling, but you’re gonna get their scratch pads, then you move on to their associates. You flip one guy who you arrest with no fanfare. It’s exactly what Mueller has been doing his whole goddamn life. It’s just that this time the boss of the family happens to be the leader of the free world. Mueller doesn’t care if he gets Trump. He doesn’t care if he doesn’t get Trump. He has no political agenda. He is digging through the layers and bringing back the truth, and the truth is going to be whatever it is going to be.”

CLAPPER.  Former Director of National Intelligence James Clapper told PBS Newhour that, in his judgment, Russia’s subversion of the 2016 presidential election did prove decisive in tipping it to Donald Trump.

Said Clapper: “As a private citizen, it’s what I would call my informed opinion that, given the massive effort the Russians made, and the number of citizens that they touched, and the variety and multi-dimensional aspects of what they did to influence opinion … and given the fact that it turned on less than 80,000 votes in three states, to me it exceeds logic and credulity that they didn’t affect the election. And it’s my belief they actually turned it.”

The Senate is finally moving on modernizing its arcane sexual harassment policy https://t.co/pSsBZGJgIt

KASPERSKY.  “Federal agencies are so far unable to comply with a law banning Kaspersky Lab software from U.S. government networks by October,” the Daily Beast reports.

“Multiple divisions of the U.S. government are confronting the reality that code written by the Moscow-based security company is embedded deep within American infrastructure, in routers, firewalls, and other hardware—and nobody is certain how to get rid of it.”

It's not just the governor's race. Democrats hope the increase in African Americans in Gwinnett, Cobb, and Henry Counties — which voted for Rs in 2012 and 2008, but Hillary in 2016 — will help win statehouse seats. https://t.co/nzqjsWW82r

Mark Leibovich: “To speak for any White House is a delicate exercise even in the best of circumstances. You’re trying to relay a president’s message while also disseminating little actual information; you’re taking abuse from the press while trying, theoretically, to assist them; you’re selling the president’s agenda while not stealing too much of his spotlight. Also, be careful: Your words can move markets, offend entire religions and trigger international incidents — or, in this case, trigger the ‘audience of one’ tuned in to his surrogates from upstairs.”

“But speaking for President Donald J. Trump presents a particular set of challenges. In Gidley’s case, it means saying things that Gidley might normally not be inclined to say, or defending things he might normally have a hard time defending, or offending people in ways that might defy his otherwise pleasing nature. But Gidley is willing to do it, and that, perhaps more than any of his other qualities, is why I had become fascinated with him.”