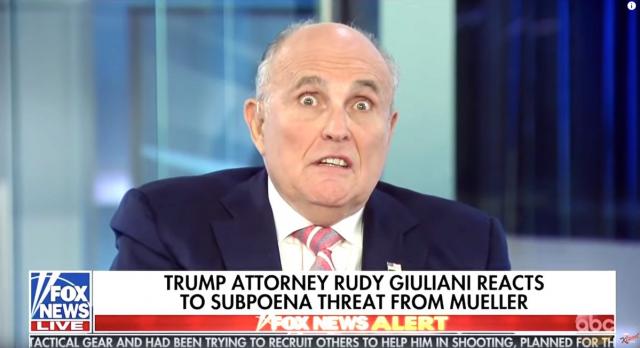 Article of Impeachment LIX.  “President Trump has personally pushed U.S. Postmaster General Megan Brennan to double the rate the Postal Service charges Amazon.com and other firms to ship packages… a dramatic move that probably would cost these companies billions of dollars,” the Washington Post reports.

“Brennan has so far resisted Trump’s demand, explaining in multiple conversations occurring this year and last that these arrangements are bound by contracts and must be reviewed by a regulatory commission… She has told the president that the Amazon relationship is beneficial for the Postal Service and gave him a set of slides that showed the variety of companies, in addition to Amazon, that also partner for deliveries.”

Now “Too Many Entrances” is the Problem. Texas Lt. Gov. Dan Patrick (R) suggested the existence of “too many entrances and too many exits” in schools may lead to such shootings, the Daily Beast reports.

Said Patrick: “We have to look at the design of our schools moving forward and retrofitting schools that are already built… there are too many entrances and too many exits to our over 8,000 campuses in Texas. There aren’t enough people to put a guard at every entrance and exit…maybe we need to look at limiting the entrance and exits into our schools so that we can have law enforcement looking at the people coming in through one or two entrances.”

Jonathan Chait: “Historically, when an interviewer springs the old video clip of the talking head advocating an embarrassing position, he has to come up with some explanation as to why things have changed. Rudy just ranted through it, so the clip wasn’t even audible.”

“It’s so simple yet so brilliant. Why have all those previous interview subjects just sat there quietly like suckers?”

“The subpoena was recently served on John Kakanis, 30, who has worked as a driver, accountant and operative for Stone.”

If you watch nothing else about the mass shooting at #SantaFe High School in Texas, watch this.

Cohen Met With Qatari Official Days Before FBI Raid.  Michael Cohen, “who made millions over the past 18 months soliciting funds from clients seeking entree and influence at the White House, met with a senior Qatari official in Florida last month, just days before the FBI raided Cohen’s home and office,” Foreign Policy reports.

“While fragments of the Trump Moscow venture have trickled out — most recently in a report last night by Yahoo News — this is the definitive story of the Moscow tower, told from a trove of emails, text messages, congressional testimony, architectural renderings, and other documents obtained exclusively by BuzzFeed News, as well as interviews with key players and investigators. The documents reveal a detailed and plausible plan, well-connected Russian counterparts, and an effort that extended from spearfishing with a Russian developer on a private island to planning for a mid-campaign trip to Moscow for the presidential candidate himself.”

Paul Ryan Raises 25 Million from one Anonymous Donor.  American Action Network, the nonprofit group closely aligned with Speaker Paul Ryan, raised a record $41.9 million amid the GOP push to repeal Obamacare and restructure the tax code — more than half of which came from one anonymous donor, Politico reports.

Republicans Can’t Govern.  “A sweeping farm bill failed in the House on Friday in a major embarrassment to GOP leaders who were unable to placate conservatives demanding commitments on immigration,” the Washington Post reports.  “Leadership put the bill on the floor gambling it would pass despite unanimous Democratic opposition. They negotiated with conservative lawmakers up to the last minutes.”

“Ryan and his longtime No. 2 Kevin McCarthy have maintained a unified public front on immigration — but behind the scenes, the interests of the outgoing speaker and his potential successor are colliding over controversial Dreamers legislation,” Politico reports.  “Both have vehemently opposed an effort by centrist Republicans to force votes on bills shielding young undocumented immigrants who came here as children from deportation. But to stop it, Ryan floated the possibility of reigniting talks on a bipartisan deal that President Donald Trump would get behind.”

“McCarthy, on the other hand, has panned that idea.”

My attempt to sort through what we know and don't know about this FBI informant Trump is now obsessed with: https://t.co/qzH5FmEGio

To Stop Leaks, Trump Will Shrink Communications Staff.  “The White House is considering shrinking its communications team in the coming weeks, two officials with knowledge of the expected changes tell CNN, with one objective being reducing the number of leaks and the overall goal being restructuring the entire press shop.  Staffers are not expected to be fired outright, but pushed out slowly or shifted to other departments in the administration outside of the West Wing.”

This makes sense.  I mean, the communications job has always been Trump’s twitter feed, anyway.

Targeted Dems do not return Trump Insults.  Politico: “After laying into Sen. Jon Tester (D-MT) in late April, Trump is reveling in a new round of attacks on the 10 senators up for reelection in states that the president won in 2016. Always more of an attack dog toward his enemies than a defender of his allies, Trump is laying into ‘Sleepin’’ Sen. Joe Donnelly of Indiana, calling Sen. Bob Casey of Pennsylvania a ‘disaster’ and blaming Sen. Sherrod Brown of Ohio for ‘catch and release’ immigration policies.”

“And Democrats are responding with a shrug, total silence or, in West Virginia Sen. Joe Manchin’s case, effusive praise for the commander in chief. Vulnerable Senate Democrats have made a conscious decision not to engage Trump on his terms, after watching the president tear apart the GOP primary field in 2016 with personal insults, derisive nicknames and political broadsides.”

It's witch hunts all the way down https://t.co/eC0cdyNaXq

Trump Will Prep for his Mueller Deposition in June.  Politico: “Donald Trump’s lawyers have begun planning a series of summer prep sessions for the president before a possible sit-down for an interview with special counsel Robert Mueller, Trump attorney Rudy Giuliani said Thursday. The planning meetings — to be held during off-hours at the White House and perhaps over rounds of golf at Trump’s private courses, Giuliani said — will mirror the then-GOP nominee’s 2016 debate preparation, in which aides briefed an impatient Trump in several brief sessions over many weeks.”

“Giuliani said the briefings likely will begin after Trump returns from a June 12 summit in Singapore with North Korean leader Kim Jong Un if a Mueller interview is agreed to.”

F.B.I. Used Informant to Investigate Russia Ties to Campaign, Not to Spy, as Trump Claims https://t.co/zNEIc8Th1W

FBI Moves to Protect the Life of Their Informant.  “President Trump’s allies are waging an increasingly aggressive campaign to undercut the Russia investigation by exposing the role of a top-secret FBI source,” the Washington Post reports.

“The extraordinary push begun by a cadre of Trump boosters on Capitol Hill now has champions across the GOP and throughout conservative media — and, as of Thursday, the first anniversary of Robert S. Mueller III’s appointment as special counsel, bears the imprimatur of the president.”

“The stakes are so high that the FBI has been working over the past two weeks to mitigate the potential damage if the source’s identity is revealed… The bureau is taking steps to protect other live investigations that the person has worked on, and trying to lessen any danger to associates if the informant’s identity becomes known.

Trump’s Approval Rating Matters. Amy Walter: “Pay attention to where the president’s job approval is in individual states or districts, not his performance in that district back in 2016. In looking at the result of many of the special elections that have taken place thus far, the Republican candidate’s vote share was close to or equaled Trump’s overall job approval rating in the district or state. For example, Trump carried PA-18 with 58% of the vote. Yet, going into the special election, his job approval rating in the district stood at a more modest 49%. Republican Rick Saccone took 49% of the vote.”

“To be fair, an open seat special election is a different beast from an incumbent versus a challenger contest in a ‘normal’ election. An incumbent comes to the table with some built-in advantages like name recognition, experience and a campaign war chest. Turnout will also be higher. However, even if the two candidates want to talk about anything but Trump, this election will be a referendum on the president. Voters’ perceptions of the president aren’t tied as much to issues as they are to his personality. This is also why Trump’s up tick in job approval matters. The closer he is to 50% or higher in a district, the better the chances for the Republican.”

Guns and prayers: A man shows up to the Santa Fe High School (Texas) shooting with an American flag and a gun. Another man says "it's an embarrassment." pic.twitter.com/TAixNrJCPp

“He said the California coastline and the White Cliffs of Dover tumble into the sea every year, and that contributes to sea-level rise. He also said that silt washing into the ocean from the world’s major rivers, including the Mississippi, the Amazon and the Nile, is contributing to sea-level rise.”

Said Brooks: “Every time you have that soil or rock or whatever it is that is deposited into the seas, that forces the sea levels to rise, because now you have less space in those oceans, because the bottom is moving up.”

Trump will campaign every week.  Time: “As Republicans try to stave off a Democratic takeover of Congress, President Trump plans to throw himself into the fray, flying to rallies as often as twice a week by the end of the summer to slam Democratic candidates… Aides believe the President will help raise the profile of local Republicans, and party strategists have set their sights on Senate and House races in 10 states that Trump won by large margins.”

“Trump plans to emphasize immigration issues this summer and fall, both in Washington and on the campaign trail. He’ll campaign for more deportation officers and detention beds… as well as funding for his promised border wall in the spending deal that Congress has to pass before Sept. 30. The White House believes a last-minute budget fight over border security—even at the risk of a government shutdown—will electrify GOP voters.”