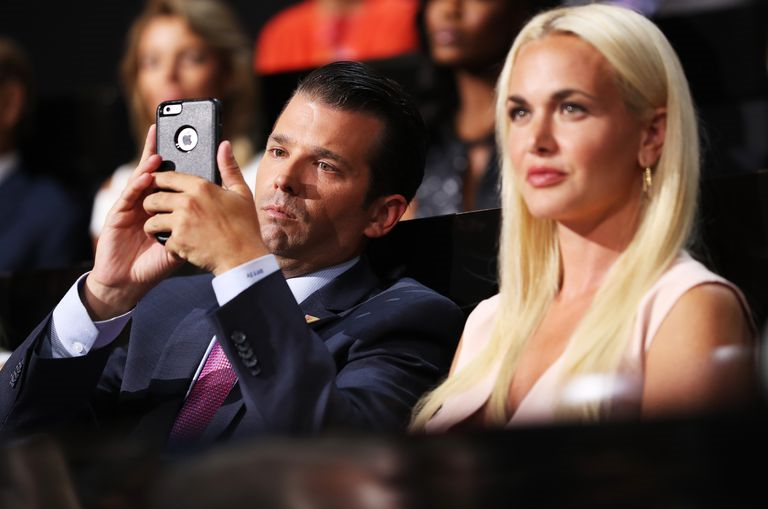 Yesterday, the Senate Judiciary Committee released nearly 2,000 pages of testimony from their investigation of Russian meddling in the 2016 presidential election, including a lengthy transcript of an interview with Donald Trump Jr. about his June 9, 2016 Trump Tower meeting with a Russian lawyer.

While Junior originally agreed to this meeting via an email exchange with music producer Rob Goldstone, with the infamous response of “I love it,” that very email refers to a planned telephone call between Junior and Russian Emin Agalarov, whose father had promised Junior the dirt on Hillary.  And in fact, because of the transcript and phone records, we now have evidence that that phone call did take place.

Q. So in Exhibit 1 Mr. Goldstone’ s e-mail at 3:43 p .m. on June 6 said that Emin would call you within about 20 minutes, and this record, which is heavily redacted, shows an incoming call 21 minutes later at 4:04 p.m. on that day from the [redacted] number. Was that a call from Emin?

TRUMP JR: I believe it to be.

Of course, dim bulb Trump Jr. says he has no recollection of the call.  I know, I forget my treasonous telephone calls with foreign agents of hostile powers all the time.   But the phone records indicate that, 27 minutes later, Trump Jr. called Emin Agalarov back.

Mmmmmm.  Interesting.  If it was just a confirming call, why the call back?   Could it be that Emin asked something of Junior, and Junior needed to run it by either the Campaign, or Papa, or both, and then call back?

That scenario seems to be in play, given what the phone records further reveal.   In between the two calls, Trump Jr. had another conversation with someone with a blocked number.

Q: In between the two calls there’s another entry, a call at 4:27 that lasted four minutes from a blocked number. Between Emin’s call to you at 4:04 and your return call to him at 4:31, with whom did you have a call?

TRUMP JR: I have no idea.

There has also been speculation that Trump Jr. had a call going with a blocked number during the meeting, but have not yet seen reference to that in the testimony yet. Thus, it is possible that Trump, if he is the blocked number, attended the meeting too.

1 comment on “It all comes down to a Blocked Call”