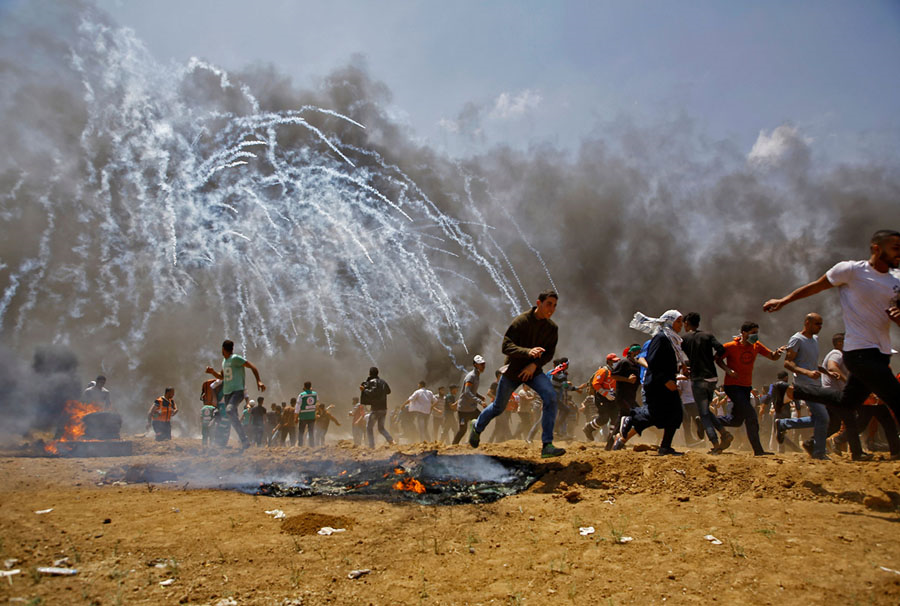 “Palestinians’ anger erupted as American and Israeli officials prepared to celebrate President Trump’s move of the embassy to Jerusalem, which previous American administrations have been unwilling to do,” the New York Times reports.

“Many Israelis see the relocation of the embassy as simply acknowledging that Jerusalem is Israel’s capital. But Palestinians, who hope to see the eastern part of Jerusalem become the capital of a Palestinian state, see the move as an abdication of any vestige of American impartiality in determining the region’s future.”

“Palestinian officials say at least 41 people have died in the latest round of protests… At least 1,700 Palestinian demonstrators were also wounded along the border fence with Gaza.”

“White House aide Kelly Sadler promised Meghan McCain she would apologize publicly for mocking her father’s health, a source familiar with the conversation has told CNN, but Sadler has yet to do so.”

“Sadler, a special assistant for surrogate communications, made the promise in an apologetic phone call to McCain after it was reported that she had jokingly said of Sen. John McCain, ‘he’s dying anyway,’ in response to his opposition to President Trump’s pick for CIA director, Gina Haspel.”

“During the phone call, McCain told Sadler she needed to apologize publicly, and the White House aide said she would, according to the source. As of Sunday, however, neither the White House nor Sadler has made a public apology.”

Jonathan Swan: “Once you’ve worked for Trump for a while you know that the worst thing you can do, the biggest show of weakness, is to apologize. He never does and never did (with one exception — the “Access Hollywood” tape). So staff knows that if they publicly apologize they’re actually MORE likely to incur Trump’s wrath than if they just move on.”  Said a senior administration official: “Not apologizing is a core operating principle for Trump. The basic belief is that you never actually get ‘credit’ — from the Left, the media, political opponents, etc. — for apologizing, so why do it? Even the Access Hollywood response video included a defiant Trump going after the ‘actions’ of Bill Clinton and ‘bullying of victims’ by Hillary, and ended with ‘See you at the debate!’”

Should President have chosen a pastor who says Jews are going to hell to give the benediction at Embassy event in Jerusalem today? pic.twitter.com/kBi9HaWw9D

“After months of confidence that public discontent with President Trump would lift Democrats back to power in Congress, some party leaders are fretting that their advantages in this year’s midterms are eroding amid a shifting political landscape,” the Washington Post reports.

“Driving their concerns are Trump’s approval rating, which has ticked upward in recent weeks, and high Republican turnout in some recent primaries, suggesting the GOP base remains energized. What’s more, Republicans stand to benefit politically from a thriving economy and are choosing formidable candidates to take on vulnerable Democratic senators.”

CBS News: “You may have noticed, gas prices are on the rise and hitting levels not seen in more than three years. Gas prices nationwide are up a nickel in just the last week. That’s 20 cents in the last month, according to AAA.”

In a new book, the lawyer—who is Mifsud's "partner and best friend," per Simona Mangiante—says that Mifsud has been "requested to hide, not to communicate, and not to speak to the press. He has been ‘put away’ and threatened to stay quiet.” https://t.co/1iyRf2gerr

The Atlantic: “FBI agents working for special counsel Robert Mueller allegedly detained a lawyer with ties to Russia who is closely associated with Joseph Mifsud, the shadowy professor who claimed during the election that Russia had ‘dirt’ on Hillary Clinton.”

“The revelation was made in a book co-written by that lawyer, Stephan Roh, and set to be published next month. The Faking of RUSSIA-GATE: The Papadopoulos Case is the latest in a stream of books aiming to capitalize on the chaos of this political moment. But it sheds new light on the expansive nature of Mueller’s investigation into Russia’s election interference and possible ties between President Donald Trump’s campaign team and Moscow. It also highlights Mueller’s interest in answering one of the probe’s biggest outstanding questions: whether the campaign knew in advance that Russia planned to interfere in the election.”

New York Times: “In a string of important races across the country, national Democrats have been embracing recruits near the political center, hoping they will give the party the chance to compete in states like Utah and Kansas where a liberal Democrat might stand little chance of winning. About a dozen crucial House races this fall are likely to feature Democratic nominees who are positioned markedly closer to the middle than the national party’s activist base — more than enough to determine control of the House.”

New York Magazine: “Their chats begin casually, with How are yous and What’s going ons. On some days, they speak multiple times, with one calling the other to inform him of the latest developments. White House staff are aware that the calls happen, thanks to the president entering a room and announcing, ‘I just hung up with Hannity,’ or referring to what Hannity said during their conversations, or even ringing Hannity up from his desk in their presence.”

“On the phone, he and the president alternate between the ‘witch hunt!’ and gabbing like old girlfriends about media gossip and whose show sucks and who’s getting killed in the ratings and who’s winning (Hannity, and therefore Trump) and sports and Kanye West, all of it sprinkled with a staccato fuck … fucking … fucked … fucker.”

“‘He’s not a systematic thinker at all. He’s not an ideologue,’ one person who knows both men said of Hannity. ‘He gives tactical advice versus strategic advice.’”

U.S. ambassador to Israel says "the reason that the Bible begins with the creation of the world is to create the chain of title from God directly to the Jewish people for the land of Israel."

So yeah, we're not pretending to be neutral anymore.https://t.co/5ewt4IxFuD

Jonathan Swan: “The leaks come in all shapes and sizes: small leaks, real-time leaks, weaponized leaks, historical leaks. Sensitive Oval Office conversations have leaked, and so have talks in cabinet meetings and the Situation Room. You name it, they leak it.”

“My colleague Mike Allen, who has spent nearly 20 years covering the White House, says we learn more about what’s going on inside the Trump White House in a week than we did in a year of the George W. Bush presidency.

“This White House leaks so much that meetings called to bemoan leaks begin with acknowledgement the bemoaning will be leaked, which is promptly leaked…by several leakers in a smallish room.”

New York Times: “While Mr. Trump remains an overpowering personality in Republican politics, he is mostly uninterested in the mechanics of managing a political party. His team of advisers is riven with personal divisions and the White House has not yet crafted a strategy for the midterms. So Mr. Trump’s supremely disciplined running mate has stepped into the void.”

“Republican officials now see Mr. Pence as seeking to exercise expansive control over a political party ostensibly helmed by Mr. Trump, tending to his own allies and interests even when the president’s instincts lean in another direction. Even as he laces his public remarks with praise for the president, Mr. Pence and his influential chief of staff, Nick Ayers, are unsettling a group of Mr. Trump’s fierce loyalists who fear they are forging a separate power base.”

Foreigners that are central to the Russia investigation keep inadvertently handing information to Robert Mueller by entering the country with their cell phones and laptops.https://t.co/ekxU2Oiznj

Commerce Secretary Wilbur Ross says he told Chinese officials that there is no “mad cow” issue with U.S. beef, nothing that both he and President Trump both eat lots of that beef and “there are no signs of mental instability,” according to the Toronto Star.   Uh……

In Ohio, Mike Gibbons’s (R) strategist is taking shots at Rep. Jim Renacci (R-OH) as the victorious U.S. Senate nominee, saying Renacci “has got a lot of ground to make up.”  This lingering resentment shows that Republican unity may be tough to come by in some key Senate races.

Rep. Martha McSally (R-AZ) “has dropped her support for immigration-reform legislation that offers a pathway to citizenship for undocumented dreamers in favor of a less generous alternative that also would sharply reduce legal immigration,” the Arizona Republic reports.

“McSally, now a U.S. Senate candidate, instead is backing a bill that calls for allowing undocumented immigrants brought to the United States as children to apply for ‘contingent non-immigrant status,’ rather than giving them a shot at becoming legal permanent residents and eventually full U.S. citizens.”

“The move comes as McSally is facing two rival conservatives seeking this year’s Republican nomination for the state’s open Senate seat and as she has taken a harder line on border security and other issues in advance of a combative Republican primary.”

“As national Republicans scramble their resources for a high-stakes midterm election year, some of the party’s biggest and most reliable donors have quietly withheld their support for Senate and House Republican groups out of frustration with the new tax law,” CNN reports.

“The donors who have boycotted… are leaders of prominent hedge funds… Collectively, they have bristled at what they view as favored treatment for corporations under the law. While the corporate tax rate was slashed from 35% to 21%, hedge funds are largely taxed at the top individual rate, which ticked down from 39.6% to 37%.”

.@ThePlumLineGS paints a damning portrait of Trump in his Fox Bubble, with Trump as Linus, Hannity as his security blanket, & the Fox News anti-Mueller narrative as The Great Pumpkin that simply isn’t real.

New Yorker: “Typically, an incoming President seeks to charm, co-opt, and, when necessary, coerce the federal workforce into executing his vision. But Trump got to Washington by promising to unmake the political ecosystem, eradicating the existing species and populating it anew. This project has gone by various names: Stephen Bannon, the campaign chief, called it the ‘deconstruction of the administrative state’—the undoing of regulations, pacts, and taxes that he believed constrain American power. In Presidential tweets and on Fox News, the mission is described as a war on the ‘deep state,’ the permanent power élite.”

Said Nancy McEldowney, who retired after thirty years in the Foreign Service: “In the anatomy of a hostile takeover and occupation, there are textbook elements—you decapitate the leadership, you compartmentalize the power centers, you engender fear and suspicion. They did all those things.”

“This idea, more than any other, has defined the Administration, which has greeted the federal government not as a machine that could implement its vision but as a vanquished foe.”

“The U.S. Supreme Court acted Monday to bust Nevada’s monopoly on legal sports betting, allowing more states to get in on the action and reap the tax benefits,” NBC News reports.

USA Today: “The justices ruled 7-2 that a 25-year-old federal law that has effectively prohibited sports betting outside Nevada cannot block states such as New Jersey that want to set up sports books. The ruling could set the stage for other states to expand legalized gambling as a source of government revenue.”