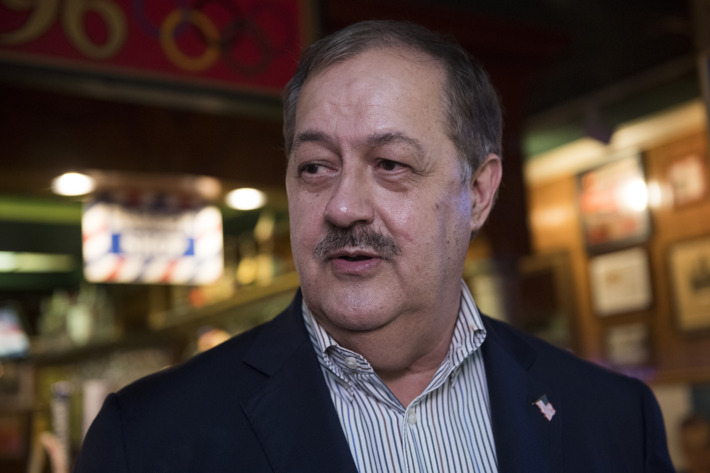 President Trump urged West Virginia voters in a tweet to reject Don Blankenship’s Senate bid, warning that — like Roy Moore in Alabama — he could cost the party a Senate seat.  Said Trump: “To the great people of West Virginia we have, together, a really great chance to keep making a big difference. Problem is, Don Blankenship, currently running for Senate, can’t win the General Election in your State…No way! Remember Alabama. Vote Rep. Jenkins or A.G. Morrisey!”

Blankenship responded: “Tomorrow, West Virginia will send the swamp a message—no one, and I mean no one, will tell us how to vote. As some have said, I am Trumpier than Trump and this morning proves it.”

Weekly Standard: “Republicans are panicking as internal polls show Don Blankenship, a coal baron who spent time in jail for a mining disaster that killed 29 workers, surging into the lead in the West Virginia Senate GOP primary over Attorney General Patrick Morrissey and Congressman Evan Jenkins.”

“The results of an internal campaign poll conducted for one rival Senate campaign on Saturday and Sunday were: Blankenship 31%, Jenkins 28%, Morrissey 27%.”

“The results of another internal poll conducted Friday and Saturday were: Blankenship 28%, Morrissey 27%, Jenkins 14%. Two weeks earlier, the same rival campaign found Blankenship at 14%, Morrissey at 29%, and Jenkins at 26%.”

Every May 8 primary election you should know about, briefly explained https://t.co/kaCiGjzuph

“In West Virginia and Indiana, the Republican Senate primary fights have morphed into multi-candidate battle royals with the combatants focused on one mission: out-Trumping their opponents,” NBC News reports.  “Tuesday’s primary votes will tell us if the strategy worked, but some key numbers in the states explain all the one-Trumpsmanship – at least for primary season. For starters, both states not only went for Trump in 2016, the president did much better than 2012 Republican Presidential Nominee Mitt Romney.”

“But after Tuesday, the Senate races in both those states will cast an eye toward November’s general election, and there the I’m-with-Trump strategy could get a little more complicated even in places that appear to be deep Trump country.”

Jonathan Chait: “The secret sauce of Trump’s real-estate business in its early stages was his ability to manipulate the media and willingness to borrow massive sums and not pay them back. When he exhausted his ability to stiff his creditors, the new secret sauce became a willingness to take money from shady overseas sources, especially (but not exclusively) Russian oligarchs looking either to park their cash overseas, or to gain some measure of influence. Whether Russia was investing in Trump for the purpose of gaining some hidden leverage over him is not incidental to the Mueller investigation but its very heart.”

“Trump’s business empire provided the entire basis for his claim to be qualified to be president. It was the proof of his genius, that he alone possessed the deal-making skills and knowledge of the political system to fix it. He managed to conceal the nature of that business empire by withholding his tax returns, and media scrutiny of his business dealings has still only scratched the surface. Those secrets carry alongside them national-security risks of unknown scale. The argument now put forward by the president and his defenders is that the FBI has no business exposing these secrets, which ought instead to remain locked in the vaults of Trump’s shadowy counterparties.”

New Yorker: “Eric Schneiderman, New York’s attorney general, has long been a liberal Democratic champion of women’s rights, and recently he has become an outspoken figure in the #MeToo movement against sexual harassment… Now Schneiderman is facing a reckoning of his own. As his prominence as a voice against sexual misconduct has risen, so, too, has the distress of four women with whom he has had romantic relationships or encounters. They accuse Schneiderman of having subjected them to nonconsensual physical violence. All have been reluctant to speak out, fearing reprisal.”

“But two of the women, Michelle Manning Barish and Tanya Selvaratnam, have talked to The New Yorker on the record, because they feel that doing so could protect other women. They allege that he repeatedly hit them, often after drinking, frequently in bed and never with their consent. Manning Barish and Selvaratnam categorize the abuse he inflicted on them as ‘assault.’ They did not report their allegations to the police at the time, but both say that they eventually sought medical attention after having been slapped hard across the ear and face, and also choked. Selvaratnam says that Schneiderman warned her he could have her followed and her phones tapped, and both say that he threatened to kill them if they broke up with him.”

House Democratic leader Nancy Pelosi said that House Democrats “have the fundraising, the issues and the political atmosphere on their side to win back the majority in November,” the AP reports.  “These factors, and an activated party base that’s helped Democrats win in special elections across the country this year are the ‘small droplets of water’ that create a wave, Pelosi said headlining a county Democratic Party banquet in Des Moines.” Said Pelosi: “This is not going to be big margins. It is going to be small margins in many places.”

Politico: “The president has been griping to associates that Rudy Giuliani, his new personal attorney, has failed to shut down the Stormy Daniels hush money saga. And he has expressed frustration that Giuliani’s media appearances are raising more questions than they are answering, turning the story into a days-long drama capped by the admission Sunday that the president may have made similar payments to other women.”

“For now, White House aides said, Giuliani still has a direct line in to Trump – the two speak almost daily – and nobody in the West Wing is eager to insert themselves between the two irascible New Yorkers by yanking Giuliani off TV. But some aides said they expect the president to fire Giuliani if his behavior doesn’t change.”

Politico: “Legal experts say the decision by Trump’s chatty counsel to keep publicly chewing over Cohen’s situation risks drawing the president into more courtroom drama. But Giuliani seems content to keep the attention focused on that tabloid-friendly fight, as the White House appears to count on Trump’s base continuing to forgive his alleged moral lapses — and as his team seems to bet that GOP voters will turn out in November if they believe it’s the only way to save the president’s political skin. Trump has increasingly cautioned his party against allowing the House, and even the Senate, to fall into Democratic control, voicing fears about his certain impeachment if that happens.”

A new CNN poll finds President Trump’s approval rate holding steady at 41% to 53%. “On the issues, however, Trump’s numbers are climbing. Approval is up 4 points on the economy to 52%, the first time it’s topped 50% since March 2017; up 5 points on foreign trade to 43% approval; and his numbers on immigration have improved 4 points since February, with 40% now approving. On handling foreign affairs, Trump’s approval rating tops 40% for the first time since April of 2017.”

“The most vulnerable Republican incumbents in the tightest congressional races in the November elections are talking less and less about the tax cuts on Twitter and Facebook, on their campaign and congressional websites and in digital ads, the vital tools of a modern election campaign,” a Reuters analysis of their online utterances shows.

“All told, the number of tax messages has fallen by 44% since January. For several congressmen in tough reelection fights, Steve Knight in California, Jason Lewis in Minnesota, and Don Bacon in Nebraska, messaging is down much more – as much as 72%.”

President Trump “has been souring on Pruitt as the negative press about him piles up,” according to Jonathan Swan.

“Pruitt — who is under siege from federal investigators, the White House, Capitol Hill, and the media — survives because the one guy who matters in the White House won’t fire him. Trump’s draining supply of goodwill towards Pruitt is the EPA administrator’s lifeline. Most everyone else in the building wants him gone.”

“The Trump administration plans to take a tougher approach to families that enter the U.S. illegally by separating parents from their children, instead of keeping them in detention together,” NBC News reports.

Said Attorney General Jeff Sessions: “If you are smuggling a child then we will prosecute you, and that child will be separated from you as required by law. If you don’t like that, then don’t smuggle children over our border.”

Legal experts are divided over whether a new bipartisan proposal would curtail the president's war-making powers or extend them, writes @profepps https://t.co/Q9m5jcowoH

Retired Marine Lt. Col. Oliver North, a central figure of the Iran-Contra scandal in the 1980s, has been named president of the National Rifle Association, CNN reports.

Said NRA Executive Vice President Wayne LaPierre: “Oliver North is, hands down, the absolute best choice to lead our NRA Board, to fully engage with our members, and to unflinchingly stand and fight for the great freedoms he has defended his entire life.”

“In a remarkable development, none of the party’s 11 battleground incumbents — those in states Republicans have targeted — is set to face a serious threat from the left this year. That includes the 10 Democratic incumbents running in states Donald Trump won in 2016, who have quelled progressive rage despite relatively moderate backgrounds.”

“Senate Democrats are even likely to dodge chaotic primaries in a trio of competitive states — Arizona, Tennessee, and Nevada — held by Republicans, the kind of races that usually draw a litany of challengers. Instead of bracing for a potentially damaging fight, the party has already settled on a de-facto nominee in each.”

This is an absolutely breathtaking work of journalism. Just-published Ta-Nehisi Coates: https://t.co/F8MwSnBRKt

President Trump ripped into John Kerry after a Globe story detailed the former secretary of state’s behind-the-scenes attempts to salvage the Iran nuclear deal, a signature Kerry accomplishment that Trump may choose to scuttle this week, the Boston Globe reports.

Said Trump: “The United States does not need John Kerry’s possibly illegal Shadow Diplomacy on the very badly negotiated Iran Deal. He was the one that created this MESS in the first place!”