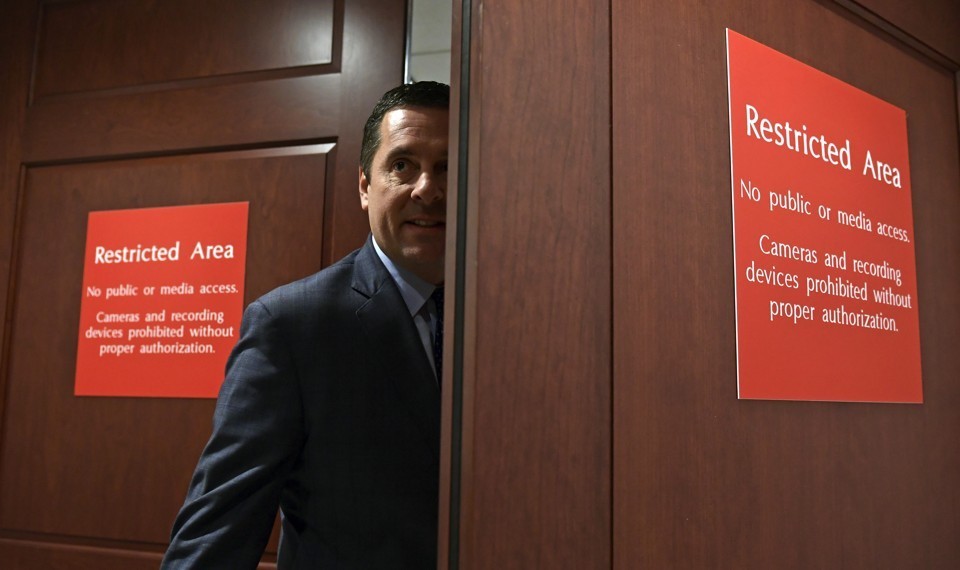 According to Nunes, the Justice Department has refused to comply with a subpoena for information that was used to convince a secret court to approve a wiretaps on then-Trump campaign staffer Carter Page.

“The only thing that’s left that we can do is we have to move quickly to hold the attorney general of the United States in contempt and that’s what I’m going to press for this week,” Nunes revealed. “We’ve asked for very important information, it’s still classified. Because of the way they conducted this information, most of this information is classified. But because this is so important, I’m not going to take any excuse to say, ‘Oh we’re harming national security.'”

Rudy Giuliani told ABC News that he can’t rule out the possibility of President Trump taking the Fifth Amendment if he testifies in the Russia investigation.  Said Giuliani: “They don’t have a case on collusion, they don’t have obstruction. I’m going to walk him into a prosecution for perjury like Martha Stewart?”

“What happens if Robert Mueller subpoenas the President?” ABC News’ George Stephanopoulos asked Giuliani at one point in the lengthy, bizarre interview. “Will he comply?”  “Well, we don’t have to,” Giuliani said. “He’s the President of the United States, we can assert the same privilege as other presidents have.”

Wall Street Journal: “The clock is ticking for special counsel Robert Mueller. With six months to go until November’s midterm elections, Mr. Mueller’s investigation into Russian meddling in the 2016 presidential campaign will soon run into a dead zone of sorts, in which former prosecutors say they expect him either to wrap up, or lie low and take no visible steps until after the election.”

“Though Mr. Mueller doesn’t face any specific legal deadline, the fall midterms amount to a political one, according to experts and prosecutors. He will reach a point this summer when Justice Department habits dictate that he will have to either finish his inquiries or go dark and stretch out his work until past November so he doesn’t appear to be trying to sway voters’ decisions, which would be at odds with Justice Department guidelines for prosecutors.”

By moving the governor to the left, Cynthia Nixon has already won. @jpressler reports https://t.co/16PTl3EPVq

Jonathan Karl: “With the shakeup of the president’s legal team, he is now all-in on a new strategy to deal with special counsel Robert Mueller: fight, delay, vilify.”

“The legal strategy dovetails with the Trump team’s political strategy: rallying the base with fear and loathing of the special counsel as a Democratic plot to nullify the 2016 presidential election.”  Said one Trump loyalist: “The only date that matters is November 6.”

“The Trump team had been pushing for a quick resolution of the special counsel’s investigation. Now they want to draw it out, attacking the investigating as a stalking horse for Democratic efforts to impeach the president.”

A GOP source familiar with the internal polling in the West Virginia U.S. Senate race tells Jonathan Swan:  “At the beginning of last week, the internals showed a 2-man race between Jenkins and Morrisey, with Morrisey having a slight edge and Blankenship down in the teens. However, following a week centered on media coverage of Blankenship’s feud with ‘cocaine Mitch’ and a bombardment of attack ads against Jenkins over the airwaves, the same poll now shows Blankenship surging with a slight lead over Morrisey, and Jenkins now down in the teens.”

Blankenship told CBS News that he will not rule out a third party bid if Morrisey wins the Republican nomination Tuesday night.  Said Blankenship: “I have not ruled out anything. I’ve said that I cannot let him win because of the opioid connection and planned parenthood connection.”

Donald Glover dances out his rage in "This Is America" https://t.co/11cVAtPRXF

Evangelist Franklin Graham told the Associated Press that the whole Stormy Daniels scandal was “nobody’s business.”  He added: “This stuff happened 12 years ago. This isn’t behavior that has taken place since he’s been president. These things happened long before he became president. That doesn’t make it right. And I don’t defend those kinds of relationships he had. But the country knew the kind of person he was back then, and they still made the decision to make him the president of the United States.”

“For anyone wondering about the state of the Republican Party in California these days, consider this: There may be no Republican candidate for governor or United States senator on the state’s ballot this November,” the New York Times reports.

“That dispiriting possibility is beginning to sink in for California Republicans, against the backdrop of a divisive debate among its candidates and leaders on how the embattled party can become competitive again in a state where Ronald Reagan was elected twice as governor and that Richard M. Nixon called home.”

“If Republicans fall short in capturing one of those two November slots next month, which members of both parties say is a strong possibility, it would apparently be the first election where there was no major party candidate for both the Senate and governor races since 1914.”

“Gina Haspel, President Trump’s nominee to become the next CIA director, sought to withdraw her nomination Friday after some White House officials worried that her role in the interrogation of terrorist suspects could prevent her confirmation by the Senate,” the Washington Post reports.

“Haspel told the White House she was interested in stepping aside if it avoided the spectacle of a brutal confirmation hearing on Wednesday and potential damage to the CIA’s reputation and her own.”

“Taken aback at her stance, senior White House aides… rushed to Langley, Va., to meet with Haspel at her office late Friday afternoon. Discussions stretched several hours, officials said, and the White House was not entirely sure she would stick with her nomination until Saturday afternoon.”

North Korea criticized what it called “misleading” claims that President Trump’s policy of maximum political pressure and sanctions are what drove Pyongyang to the negotiating table, CBS News reports.  The North’s official news agency quoted a Foreign Ministry spokesman warning the claims are a “dangerous attempt” to ruin a budding detente on the Korean Peninsula.

Leonard Pitts: “These are not normal times. Indeed, sometimes, I wonder if we appreciate just how abnormal — how fraught with danger — they really are. Under Trump, American laws, news media and mores are under assault, to say nothing of American democracy itself.  And I’m sorry, but I don’t think “understanding” Trump followers will ameliorate — or even address — any of that. Besides which, is there really so much left to “understand?”

Not from where I sit. Long before Trump even existed as a political force, many of us noted with alarm the rise of a backlash among right wingers deeply angry and profoundly terrified by the writing on the demographic wall. Said writing foretold — and for that matter, still foretells — the declining preeminence of white, Christian America. As several studies now show, a sense of alarmed displacement among white, Christian America is the soil from which the weed of Trumpism grew. The idea that we must “understand” those folks carries with it an implicit suggestion that in so doing, we might find some ground for compromise. It would be a great idea in normal times. But again, these times are not normal.”

There’s a reason this has not happened since Nixon. It exposes the Trump aides to criminal and civil liability, depending on the nature of the “dirty ops,” see eg 18 USC 242, 50 USC 1809, 42 USC 1983. Team Trump is out of control. Expect an investigation. https://t.co/23SKYrHgpe

Richard Wolffe wants to know how Trump keeps finding these idiots.  “Barack Obama’s closest staffers were often intensely competitive, earnest, studious types who struggled to understand why the world didn’t admire their idealism and talent as much as they did. George W Bush, at least in his first term, surrounded himself with trigger-happy street fighters who confused patriotism with their own paranoia and prejudice.

In the case of Donald Trump, the company he keeps is surprisingly consistent: a singular type with a shared set of character traits. They are, to a man, cocky, unqualified and kooky. You might call this the CUK theory of the Trump presidency, in honor of one of their archetypes: Steve Bannon.”

Anne Applebaum looks in on a nation where everyone gets fake news 24/7, without having to watch Fox.  “The transformation of Russian media hasn’t happened overnight. Back in 2010, the Internet in Russia was a relatively vibrant place, where people with different kinds of ideas argued things out, at least some of the time. Independent media had some traction, and independent voices were heard. There were negative stories about the Western world, but positive ones, too. Eight years later — following Vladimir Putin’s return to the presidency, and a sharp change in government information policy — the situation is different. …

Most of the stories, ranging from big news events to local murders to sheer inventions (“the German government is taking children away from their families and giving them to gay couples”) fit into a particular set of narratives. Daily life in Europe is depicted as frightening and chaotic; Europeans are weak, with declining morality and no common values; terrorism keeps people paralyzed with fear; the refugee crisis is getting worse all the time; sanctions on Russia have backfired and are now undermining the European economy and destroying the welfare state. Russia, in the version of the world depicted here, does not need a welfare state, since its citizens are so much hardier.”