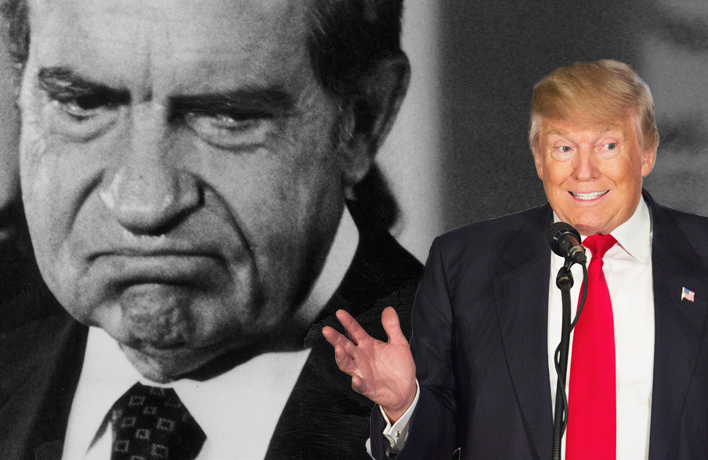 President Trump “undercut his attorney, Rudy Giuliani, and said the former New York mayor will eventually get the facts right regarding a payment to a pornographic actress who said she had an affair with Mr. Trump,” the New York Times reports.  Trump said that everything “has been said incorrectly,” blaming the media coverage and Mr. Giuliani’s short time on the job.  He added that Giuliani, who joined Trump’s legal team last month, “started a day ago” but will “get his facts straight.”

Meanwhile, taking that cue, Giuliani said in a statement that the October 2016 settlement with adult actress Stormy Daniels was made to protect President Trump’s family and “would have been done in any event, whether he was a candidate or not,” the Washington Post reports.  Giuliani’s latest comments came after he mused what would have happened if Daniels’s allegation of a decade-old affair had surfaced right before the election – remarks that legal experts said gave investigators new fodder.

But the walk back failed.

!!! Trump knew about Michael Cohen's payment to Stormy Daniels "several months before he denied any knowledge of it," NYT reports. https://t.co/4Lk7N5GSAj

“President Trump knew about a six-figure payment that Michael Cohen, his personal lawyer, made to a pornographic film actress several months before he denied any knowledge of it to reporters aboard Air Force One in April,” the New York Times reports.

“It was not immediately clear when Mr. Trump learned of the payment, which Mr. Cohen made in October 2016, at a time when news media outlets were poised to pay her for her story about an alleged affair with Mr. Trump in 2006. But three people close to the matter said that Mr. Trump knew that Mr. Cohen had succeeded in keeping the allegations from becoming public at the time the president denied it.”

One close Trump adviser said Giuliani had “waived the privilege big time” with his appearance on “Fox & Friends” and description of his conversations with his client, the president. https://t.co/dkuoQ39qg8

As we already knew, their credibility is forever destroyed.  From a Wall Street Journal editorial:

“Mr. Trump’s public deceptions are surely relevant to his job as President, and the attempted cover-up has done greater harm than any affair would have. Mr. Trump asked Americans, not least his supporters, to believe his claims about the payments. They were false and conveniently so in putting the onus on Mr. Cohen. Now, as more of the story has emerged, he wants everyone to believe a new story that he could have told the first time.

Mr. Trump is compiling a record that increases the likelihood that few will believe him during a genuine crisis—say, a dispute over speaking with special counsel Robert Mueller or a nuclear showdown with Kim Jong Un. Mr. Trump should worry that Americans will stop believing anything he says.”

I will never believe a word Trump says.   If he says we will need to go to war to defend the country, I will not believe it.   Thus, he should resign.

“These questions are again front and center before the country. People will answer them differently, depending on their views about Trump. Some will condemn the behavior. Some will condone it. Many, no doubt, will try to look away, even if that has become more and more difficult. The questions won’t go away. They are part of the fabric of this presidency.”

Susan Glasser: “This coming Monday, Putin, already Russia’s longest-serving leader since Joseph Stalin, will be inaugurated to a new six-year term. In March, Trump defied his own advisers to congratulate Putin in a post-election phone call, then surprised them again by inviting Putin to Washington for a summit meeting. It seems implausible and politically insane to imagine that Trump would even consider a chummy one-on-one with Putin now, especially when the risks to Trump from the special counsel Robert Mueller’s investigation of Trump’s Russia ties appear so significant. And yet the invitation, I’m told, was real, and reflects the President’s strongly expressed personal preference.”

“Will Trump follow through with it—and add yet another high-drama plotline to the already oversubscribed Trump show?”

Republicans aren’t giving up on those campaign ads trying to tie Democratic candidates to Nancy Pelosi … even though signs are it’s not going to work.

“There is increasing evidence that tying candidates to Pelosi as a campaign tactic may not have the impact needed to bring a race home for Republicans. Just ask [losing PA-18 candidate] Rick Saccone,” David Winston, a Republican pollster close to House GOP leaders, wrote a couple weeks ago in Roll Call. […]  Winston, for instance, surveyed voters to measure the impact of attacks on Pelosi against positive messaging around the GOP’s single biggest domestic policy victory in the Trump era: the $1.5 trillion tax cut signed into law in December.

By a margin of 73 to 12 percent, voters said the tax package was more important to them than whether Pelosi remained the Democratic leader, according to Winston’s survey. Two weeks ago, The Washington Post-ABC News poll found a similar result. It asked respondents to rate whether a candidate “who shares your opinion on Nancy Pelosi” is important in deciding their vote. Of the 35 percent who said it was important, only 17 percent considered the Pelosi factor “extremely important” and a healthy majority of 60 percent who said it was not important.”

Democrats have finally figured out what Republicans knew all along: https://t.co/6yRlBh2N8l

A new Public Policy Polling survey in Nevada finds that Jacky Rosen (D) leads Sen. Dean Heller (R-NV) in the U.S. Senate race by a narrow 44% to 42% margin, with 14% of still undecided.  The poll also found a plurality of Nevadans said they supported the Affordable Care Act, and with a majority saying they disapproved of both Heller and President Trump’s job performance.

This proposal puts a new, racist twist on an already-bad idea https://t.co/0erRwvV85c

Iowa Gov. Kim Reynolds’ (R) office said “she will sign legislation prohibiting nearly all abortions in Iowa after a fetal heartbeat is detected, making it the most restrictive abortion ban in the nation,” the Des Moines Register reports.  “The law, which goes into effect on July 1 if not stopped by courts, will require physicians to conduct an abdominal ultrasound to test for a fetal heartbeat on any woman seeking an abortion. If a heartbeat is detected, a physician cannot perform an abortion. Experts said a fetal heartbeat can be detected about six weeks into a pregnancy and often before a woman realizes she’s pregnant.”

Associated Press: “Similar legislation passed in other states didn’t go into effect after they were challenged in court over their constitutionality.”

6 week bans are in clear violation of the three trimester framework under Roe v. Wade and Casey.

Trump was convinced to sell lethal weapons to Ukraine thanks in part to a savvy charm offensive from Kiev, writes @NatashaBertrand https://t.co/kBG5pb42oJ

Washington Post: “More than 50,000 Hondurans who have been allowed to live and work in the United States since 1999 will have 20 months to leave the country or face deportation… the latest in a series of DHS measures aimed at tightening U.S. immigration controls.”

Jonathan Swan: “As part of his exasperation with being handled, Trump has taken to telling friends that — like Lyndon Johnson — he doesn’t even need a chief.”  “Trump has never fully grasped the concept. Sources close to Trump repeat the cliché that he wants to run the White House like the Trump Organization — an unstructured family business where he woke most days unsure of what lay ahead, and ran his business like a series of jazz improv sets.”

“Back then, he spent his days on the phone, taking calls, receiving ideas, making decisions on pure gut instinct with a disdain for sophisticated data or prescriptions from consultants.”

Trump “is increasingly relying on longtime outside advisers rather than White House staff as he deals with several major issues simultaneously, from a North Korean summit to the Russia investigation. But the perils of that approach were on display this week following a television interview he orchestrated with his new counsel, Rudy Giuliani,” the Wall Street Journal reports.

“For instance, Mr. Trump has been in contact of late with his former campaign manager and senior adviser Stephen Bannon… And Mr. Trump invited former campaign staffer Corey Lewandowski, whom Mr. Trump ousted from the campaign and never hired in the White House, to travel with him on Air Force One to a recent rally in Michigan.”

“House Republicans are preparing to endorse President Trump’s plan for a military parade in the nation’s capital, with warfighting vehicles rolling down city streets and planes flying overhead,” Bloomberg reports.  “The display in Washington would be authorized under the Republican-proposed draft for the annual defense policy measure.”

Michael Cohen “gained access to as much as $774,000 through two financial transactions during the 2016 presidential campaign as he sought to fix problems for his boss,” the Wall Street Journal reports.

“Those transactions could factor into a broad investigation of Mr. Cohen’s business affairs being conducted by Manhattan federal prosecutors and the Federal Bureau of Investigation, who are examining whether Mr. Cohen violated any laws in his efforts to raise cash and conceal negative information about Mr. Trump… Those include transactions tied to his credit line and his ownership of real estate and taxi medallions.”

Democrats are eager to campaign on the promise of impeaching Trump, but doing so before Mueller ends his investigation will only undermine Congress's ability to reach a consensus for his removal. https://t.co/3zo0lFpHqB

“The Missouri General Assembly has taken the historic step of calling itself back into special session to decide whether to impeach Gov. Eric Greitens (R),” the Kansas City Star reports.

“According to the petition signed by 138 House members and 29 senators — both more than the three-fourths required in each chamber to call a special session — lawmakers will consider the findings and recommendations of a House committee investigating Greitens, ‘including, but not limited to disciplinary actions against Gov. Eric R. Greitens.’”

St. Louis Post-Dispatch: “The unprecedented move comes a day after the House released a second scathing report on the governor and sets the state for the special session to start during the governor’s trial on felony invasion of privacy charges related to an extramarital affair he had in 2015.”

“President Trump’s new attorney, Emmet Flood, a veteran of the Clinton impeachment battles, is the leading candidate to replace the White House’s top lawyer,” the AP reports.  “The move would be an effort to prepare for the possibility that Democrats could regain control of the House after the November election and undertake new congressional investigations.”

Josh Marshall relayed this significant insight from “someone steeped in anti-corruption enforcement (both domestic and foreign) on the prosecution and defense side.”

“As we already know, Michael Cohen is the prototypical fixer or bagman…The bagman’s job is to get bribe money to people while insulating and giving deniability to the ultimate payor of the bribe…

Trump is a major real estate developer in NY who has openly bragged about his ability to cut through red tape and get politicians in his pocket. We now have serious SDNY public corruption prosecutors and FBI agents in possession of a massive amount of electronic data from his bagman. They likely already have all of his financial records as well. And Rudy has now given them the roadmap for how Trump may have laundered bribes through Cohen as purported legal fees or retainer payments. Every invoice Cohen has ever issued to Trump is suspect. Every corrupt payment Cohen has ever made or facilitated to building inspectors, councilmen, pornstars, or whomever can potentially be tied back to Trump. In addition, I suspect Trump and his kids had a false sense of comfort that their communications with Cohen would be privileged. I am convinced this is why Trump and his family are freaking out about the Cohen raid and the possibility he could flip. The SDNY is sitting on the mother lode of evidence and Rudy has given them the connection between purported legal fees and payments by Cohen to third parties.”