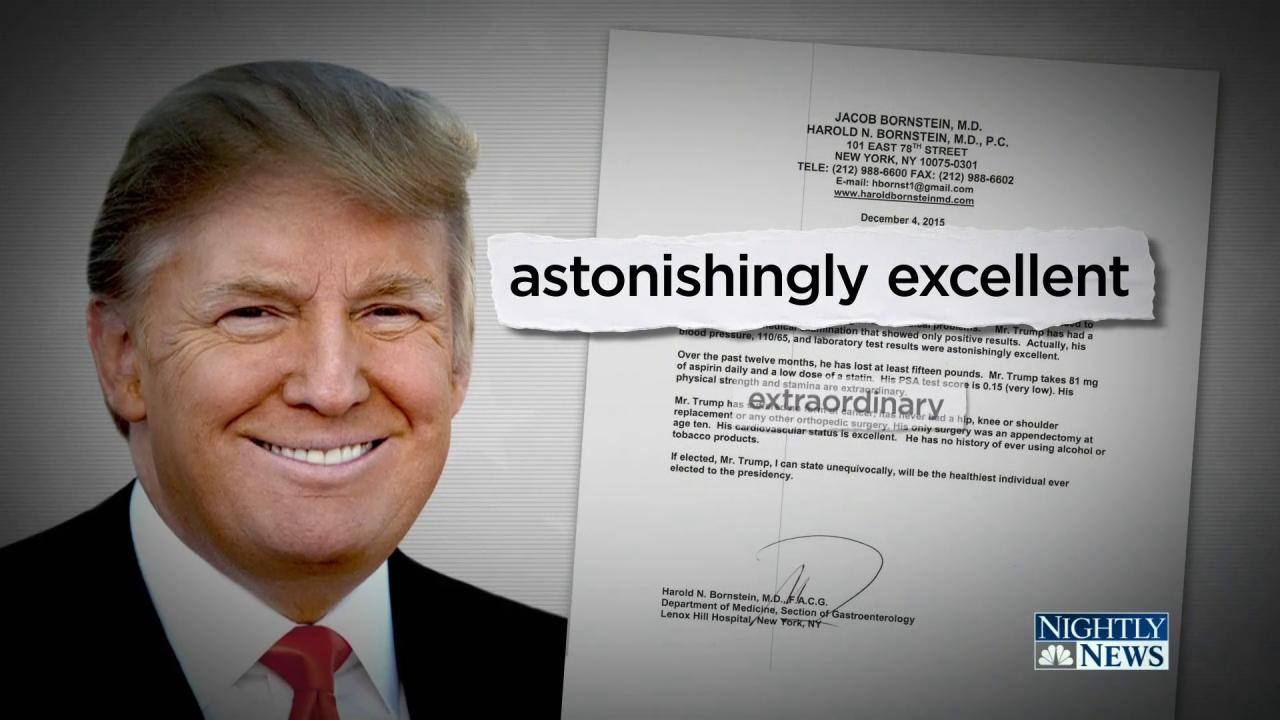 “When Dr. Harold Bornstein described in hyperbolic prose then-candidate Donald Trump’s health in 2015, the language he used was eerily similar to the style preferred by his patient. It turns out the patient himself wrote it,” CNN reports. Said Bornstein: “He dictated that whole letter. I didn’t write that letter.”

““I just made it up as I went along.”  The admission is an about face from his answer more than two years when the letter was released and answers one of the lingering questions about the last presidential election. The letter thrust the eccentric Bornstein, with his shoulder-length hair and round eyeglasses, into public view.”

This all comes after Trump had his goons raid the hyperbolic doctor’s office.   “In February 2017, a top White House aide who was Trump’s longtime personal bodyguard, along with the top lawyer at the Trump Organization and a third man, showed up at the office of Trump’s New York doctor without notice and took all the president’s medical records,” NBC News reports.  “The incident, which Dr. Harold Bornstein described as a ‘raid,’ took place two days after Bornstein told a newspaper that he had prescribed a hair growth medicine for the president for years.”

Mueller raised the possibility of subpoenaing Trump while talking to Trump’s lawyers. https://t.co/j1cRf7oeWr

“In a tense meeting in early March with the special counsel, President Trump’s lawyers insisted he had no obligation to talk with federal investigators probing Russia’s interference in the 2016 presidential campaign,” the Washington Post reports.

“But special counsel Robert Mueller responded that he had another option if Trump declined: He could issue a subpoena for the president to appear before a grand jury.”

“Mueller’s warning — the first time he is known to have mentioned a possible subpoena to Trump’s legal team — spurred a sharp retort from John Dowd, then the president’s lead lawyer.”

RR on leaked impeachment articles drafted by House Freedom Congress: "the DOJ is not going to be extorted" pic.twitter.com/PdKlKFRrJA

“Conservative House allies of President Trump have drafted articles of impeachment against Deputy Attorney General Rod Rosenstein, who oversees the ongoing special-counsel probe, setting up a possible GOP showdown over the federal investigation into Russian interference in the 2016 election,” the Washington Post reports.

Robert Costa: “It’s about a question that came up at my table at the event that evening, talking with guests of The Washington Post. They asked me about who was the most powerful person in a room full of seasoned politicians and national figures.”

“Looking around, I saw pundits and senators, actors and lawyers — and some people who overlapped a few categories. And then I found my answer sitting two tables away: Deputy Attorney General Rod Rosenstein, who is overseeing the ongoing special counsel probe.”

“Rosenstein, I told them, may not be the most famous person at the Washington Hilton, but he was perhaps the most powerful, in terms of raw political power at this moment. The fate of the Trump presidency may well rest in what special counsel Robert S. Mueller III eventually reports out — and Rosenstein is responsible for overseeing the investigation.”

It's insane people can say there's no evidence of collusion with Russia. There's so much evidence! https://t.co/7g2EKdscQV pic.twitter.com/ZxpdkDWie9

Jonathan Chait: “I would argue that the publicly available information pertaining to that episode amounts to proof of Trump campaign collusion with Russia. You have a Russian agent dangling Russian assistance in the election… and the offer of help being accepted… It doesn’t even matter to what degree or even whether the offer was actually followed through. If you take a meeting to plan a crime, and the crime later happens and you benefit, you are an accessory to the crime whether or not you participated after the meeting.”

“But even if you don’t consider the Trump Tower meeting to be absolute proof of collusion, it is certainly evidence of collusion. It was, after all, a meeting held for the express purpose of furthering cooperation — or, as it were, collusion — between the Trump campaign and Russia. And there is no reason to believe that the publicly available evidence of this meeting — which Trump and his family have lied about, repeatedly — contains the entire extent of the information about it.”

Harry Enten: “When we look at every election in terms of performance relative to partisan baseline, we find that Democrats overperformed past elections in 83 of 114 elections. Democrats have overperformed by an average of 13 points in these elections.”

“Democrats are overperforming in districts, regardless of which way the district usually leans. But Democrats overperformance from the baseline has actually been greater in districts with a Republican lean.”

“These results suggest that the Republican Party is in trouble heading into the midterm elections. If past trends hold, it is possible Democrats could see a double digit swing in the average House district in 2018 compared with past elections.”

Compared to the previous midterm baseline, new analysis from Echelon Insights suggests Democratic turnout will be up 16.7% while Republican turnout will be up just 0.5%. It’s not that Republicans are demoralized — they’re predicted to vote at the same rates as the last midterm — it’s that Democrats are energized like never before.

Compared to the 2014 baseline, Echelon says this turnout change is enough to shift the margin of victory to Democrats by 7.5%.

Around the world, friend and foe alike assume the president of the United States is an idiot and act accordingly: https://t.co/zv60iQFwoV

“The presidential news conference, a time-honored tradition going back generations, appears to be no longer,” the AP reports.  “More than a year has passed since President Trump held the only solo news conference of his administration — a rollicking, hastily arranged, 77-minute free-for-all during which he railed against the media, defended his fired national security adviser and insisted nobody who advised his campaign had had contacts with Russia.”

The leaked list of questions Mueller wants to ask Trump highlights the risk to the president should he agree to an interview, reports @AdamSerwer https://t.co/VdPVaqsE6X

Joshua Green: “Farm districts… put Trump in the White House and are the backbone of the GOP majorities in Congress. They’re also uniquely positioned to suffer from a trade war with China. In early April, responding to Trump’s proposed $50 billion in tariffs on Chinese goods, China announced or implemented retaliatory levies on roughly $50 billion in U.S. exports, including wheat, corn, cotton, sorghum, tobacco, and soybeans—a direct strike at the deep-red, Trump-friendly heartland.”

“It’s also a strike at the Trump voters the GOP is depending on to show up in November. According to data compiled by Bloomberg measuring which U.S. congressional districts rely most on soybeans for economic activity, far more GOP than Democratic districts will suffer… But party affiliation alone doesn’t capture the extent to which Trump voters stand to be hurt: Of the 30 districts most reliant on soybeans, Republicans represent 25 and Democrats 5; all voted for Trump in 2016.”

This makes total sense and is completely in Democrats' self-interest but I have a deep sense of dread about what happens if mutually-reinforcing hardball escalation keeps going for a few decades https://t.co/0z1kjDH3Pn

“A controversial trip to Morocco by EPA chief Scott Pruitt last December was partly arranged by a longtime friend and lobbyist, who accompanied Pruitt and his entourage at multiple stops and served as an informal liaison at both official and social events during the visit,” the Washington Post reports.

“Information obtained by The Washington Post shows the visit’s cost exceeded $100,000, more than twice what has been previously reported — including $16,217 for Pruitt’s Delta airfare and $494 for him to spend one night at a luxury hotel in Paris. He was accompanied by eight staffers and his round-the-clock security detail.”

Albert Kelly, a top aide to EPA Administrator Scott Pruitt on toxic waste cleanups, has decided to resign from the agency, Axios has learned.  “Two sources with knowledge of Kelly’s decision say the continual bad press about his history in banking — he was barred from working in the finance industry because of a banking violation — made Kelly decide ‘enough is enough.’”

Meanwhile, the former Secret Service agent who led Pruitt’s 24/7 security detail while also leading his own private security firm resigned, ABC News reports. Said Pasquale Perrotta: “All of this press is taking a toll on my family. I decided to move on and it’s been an honor to serve.”

Five questions for Trump that are missing from Robert Mueller’s list: https://t.co/bwpEUz2UQq pic.twitter.com/5fFQFl1teL

A National Enquirer cover story targeting Michael Cohen could be a strong sign President Trump is upset with his personal lawyer and turning against the man known for years as his “fixer,” CNN reports.

“According to the source, Enquirer publisher David Pecker, who is a longtime friend of Trump’s, would not have allowed the publication of the story — which featured a headline including the phrase ‘Trump’s Fixer’s Secrets & Lies’ — without the President’s blessing.”

When asked whether he thought a message was being sent by the story’s publication, Cohen told CNN: “What do you think.”

Special counsel Robert Mueller’s office “wants two more months before it looks toward sentencing former national security adviser Michael Flynn, who has pleaded guilty to lying to investigators and is cooperating in the Russia probe,” CNN reports. Prosecutors told the court: “Due to the status of the special counsel’s investigation, the parties do not believe that this matter is ready to be scheduled for a sentencing hearing at this time.”

Tom Price, President Trump’s first secretary of the Department of Health and Human Services, said “the Republican tax law would raise the cost of health insurance for some Americans because it repealed a core provision of the Affordable Care Act,” the Washington Post reports.

Said Price: “There are many, and I’m one of them, who believes that that actually will harm the pool in the exchange market, because you’ll likely have individuals who are younger and healthier not participating in that market, and consequently, that drives up the cost for other folks within that market.”

Washington Post: “In the 466 days since he took the oath of office, President Trump has made 3,001 false or misleading claims… That’s an average of nearly 6.5 claims a day.”

"When white conservative evangelicals feel threatened by cultural change, the old demons of racism and misogyny, which lurk at the heart of the American evangelical tradition, return with a vengeance." https://t.co/xWYD0CiQu7

“The previously unreported incident is the first sign that serious concerns about Ronny Jackson’s conduct had reached the highest levels of the White House as far back as September — months before White House aides furiously defended Jackson’s professionalism, insisted he had been thoroughly vetted and argued allegations of misconduct amounted to unsubstantiated rumors.”