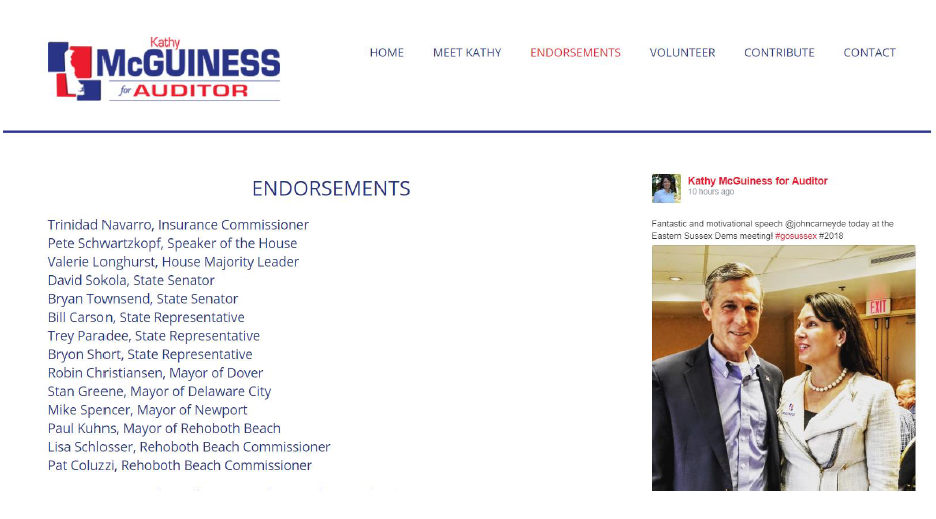 Because we are beginning to note a pattern here.  Here is her Endorsement page on her website.   Above is a screenshot of that page that was captured earlier.

From just a glance, it appeared that Governor John Carney had endorsed McGuiness due to the placement of his picture on the Endorsement page.   Upon closer inspection however, the picture is actually part of a Facebook/Twitter application that is embedded onto the page that rotates five or more of Kathy’s most recent posts to her social media account.  The post in question (with Carney’s picture) no longer appears on the Endorsement page, most likely because it has been rotated out of the circulation as McGuiness has published more social media posts.  Carney’s name does not appear in the list of endorsements and as mentioned in our prior piece on this race, Carney is neutral and feels it would not be ethical of him to endorse in this race.

But there have been two other incidents were it appears McGuiness has been playing fast and loose with endorsements.  First, McGuiness’ Endorsement page previously listed John Starke, Chairman of the Kent County Democratic Party Executive Committee and Jane Hovington, Chairwoman of the Sussex County Democratic Party Executive Committee.  However, both had not endorsed McGuiness and they had their names removed from the page.

Second, the Delaware Democratic Party’s event page listed a fundraiser for Kathy McGuiness as follows: “IBEW Local 313 Fundraiser to Support Kathy McGuiness for State Auditor.”   However, Local 313 President Darren Scott has stated that neither he nor the Local had not endorsed McGuiness and were not sponsoring the fundraiser.  McGuiness was just renting the hall space at the Local 313’s facility for the fundraiser. The listing on the Party’s event page has been changed once that was pointed out to them.

I suppose there can be innocent explanations for all of this, but there is that old saying about “Fool Me Once, Shame on You’ that applies.