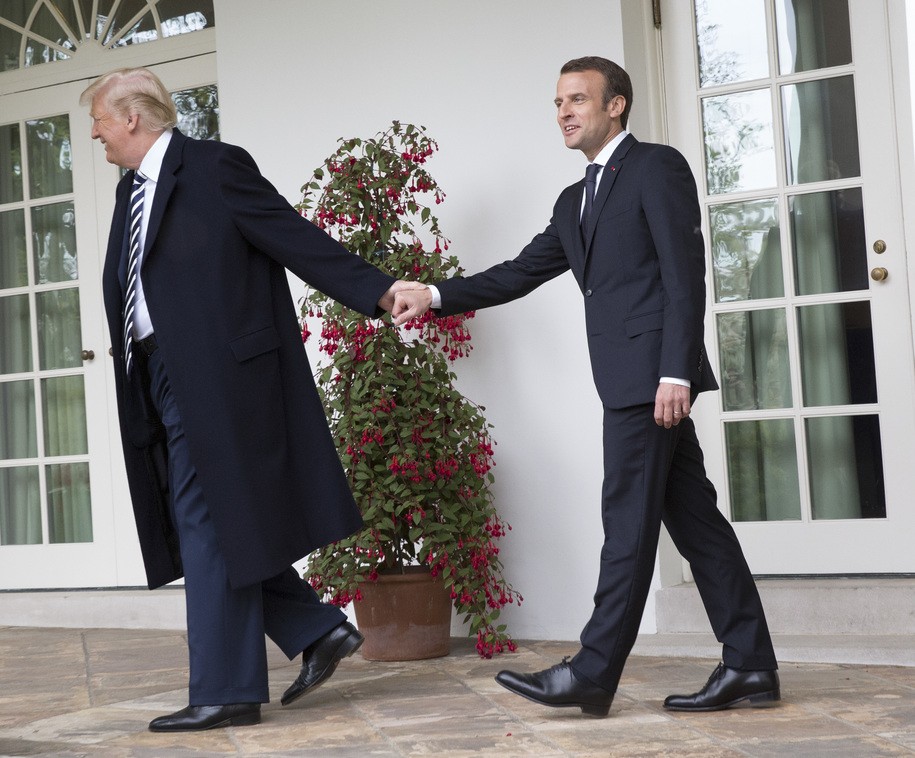 “The Senate Veterans Affairs Committee is examining allegations that President Trump’s nominee to lead the Veterans Affairs Department oversaw a hostile work environment as the White House physician and allowed the overprescribing of drugs,” the New York Times reports.  “They have also received claims that Dr. Ronny Jackson drank too much on the job.”  Playbook: “Shouldn’t this alarm us? The president’s physician should not be drinking at all while working.”

President Trump said that he “is standing behind Ronny Jackson to lead the Department of Veterans Affairs, but suggested his embattled nominee should drop out because of what Trump characterized as ‘ugly allegations‘ that have surfaced,” the Washington Post reports.  Said Trump: “I don’t want to put a man through a process like this. It’s too ugly, and it’s too disgusting.”

The New York Times also quotes Trump: “The fact is, I wouldn’t do it. What does he need it for? To be abused by a number of politicians?”   Karen Tumulty: “Oh, Trump still insists he supports the well-liked doctor, but make no mistake about it: Jackson has been shown the door.”

The new Gallup poll that everyone is so excited about actually shows that Trump and Republicans are on track to major midterm losses.

Trump's deep unpopularity is a big and important story, and we should talk more about it.

“Former Trump campaign chairman Paul Manafort was interviewed by the FBI twice while he was working as a political consultant for a Ukrainian political party — several years before he was named a top adviser to Donald Trump,” the Washington Post reports.

“The information raises fresh questions about how closely the Trump campaign vetted staff members and whether Manafort and Gates told officials about their interactions with the FBI.”

“Fired FBI Director James Comey has retained former U.S. Attorney Patrick Fitzgerald as one of his personal attorneys, bringing in a heavy-hitting former prosecutor, close friend and longtime colleague to help him navigate his dramatic role as a potential witness in the investigation of President Trump’s campaign and potential obstruction of justice,” TPM reports.

Asha Rangappa: “Pat Fitzgerald was also the special counsel appointed by Comey who investigated and charged Scooter Libby. This is going to be goooood.”

“A federal judge in Washington on Tuesday delivered the toughest blow yet to the Trump administration’s efforts to end deportation protections for undocumented immigrants known as ‘dreamers,’ ordering the administration to continue the Obama-era program and — for the first time — to accept new applicants,” the Washington Post reports.

Vanity Fair: “Things have been different since the raid. With no office to occupy, Cohen goes to the gym and restaurants. He watches television and meets with his lawyers. His e-mail signature still reads Michael D. Cohen, Esq., Personal Attorney to President Donald J. Trump. His moods oscillate along with the news cycle and the time of day…. There are moments when he is convinced that he is collateral damage in the Mueller probe and that he will beat this. There are times when he is overwhelmed by the mounting legal bills he already faces, and how they could balloon if he is indicted.”

Said one person close to Cohen: “He is really confused. He doesn’t know what they could charge him with, but he’s on the edge of his seat.”

“It’s a state that is not allowing him much sleep. According to a source familiar with the situation, Cohen broods at night, pacing in his hotel room, worrying about how his legal nightmare is impacting his family. He wonders if there are people within Trump’s orbit who might have wanted to see him go down.”

Research on the "widowhood effect" finds the risk of hospitalization and death increases after a spouse dies https://t.co/MKcStcJM3s

EPA chief Scott Pruitt “faces a make-or-break moment on Thursday, when he’s slated for a pair of congressional hearings, but he’ll be heading to the Hill without the full backing of the Trump White House,” the Daily Beast reports.

“Two sources familiar with Pruitt’s preparation for the hearing say that the EPA has turned down an offer from the White House to help prepare the administrator for what is sure to be a bruising few hours of questions about the ethics and government spending controversies that have dogged him of late.” White House official characterized the EPA’s response as “get lost.”

“White House officials are cautioning Republican lawmakers and other conservative allies to temper their defense of Scott Pruitt… in a sign that administration support for the embattled EPA chief may be waning,” Bloomberg reports.

“The warnings come as several top GOP lawmakers have stepped forward to publicly criticize Pruitt in recent days, marking a dramatic turn of fortune for one of the most conservative members of President Donald Trump’s cabinet who has been heralded for dismantling Obama-era regulations.”

A federal jobs guarantee has moved from "Thing wonks argue about" to "Thing politicians propose." Here's my look at it: https://t.co/KsrqmB3plZ

President Trump called North Korea’s leader a “very honorable” person and expressed hope their meeting will occur “as soon as possible,” The Hill reports.  Said Trump: “He really has been very open and, I think, very honorable from everything we’re seeing.”

.@Rob_Malley and @ColinKahl on Europe's last-ditch effort to save the Iran deal, and what happens if it fails: https://t.co/VAHUjD30s6

Washington Post: “By asserting that the government would not be able to ‘flip’ Cohen, Trump invited a question: If the Russia probe is the ‘witch hunt’ the president says it is — and if he is as innocent as he so often proclaims — what incriminating evidence would Cohen have on Trump that would give him leverage to flip?”

“It was only the latest instance of the president adopting a posture vis-a-vis his legal troubles that is both combative and defensive — and, perhaps unwittingly, seems to assume guilt.”

“Trump accused the FBI of going rogue by seizing Cohen’s records. He went to court to try to deny investigators access to his communications with Cohen. And he threatened to fire Justice Department officials, protesting overreach. Again and again, many legal experts say, the president has taken the steps of a subject who has something to hide, creating the appearance of a coverup even if there is no crime to cover up.”

“President Trump twice gave James Comey an alibi for why a salacious report about the 2013 Miss Universe pageant in Moscow couldn’t be true: He never even spent the night in Russia during that trip, Trump told the former FBI director, according to Comey’s memos about the conversations,” Bloomberg reports.

“Yet the broad timeline of Trump’s stay, stretching from Friday, Nov. 8, 2013, through the following Sunday morning, has been widely reported. And it’s substantiated by social media posts that show he slept in Moscow the night before the Miss Universe contest.”

Politico: “A conscious effort by Trump to mislead the FBI director could lend weight to the allegation—contained in a largely unverified private research dossier compiled by a former British spy in 2016—that Trump engaged in compromising activity during the trip that exposed him to Russian government blackmail.”

“It has also likely caught the eye of special counsel Robert Mueller, legal analysts say. False statements to Comey about the trip could demonstrate that Trump has ‘consciousness of guilt,’ according Pete Zeidenberg, a former federal prosecutor who worked for special counsel Patrick Fitzgerald’s investigation of national security-related leaks during the George W. Bush administration.”

“That could bolster a legal case against Trump.”

Kansas Secretary of State Kris Kobach and his lawyers appear to have forgotten to delete a section of a document they filed in federal court that a point of law "probably isn't worth arguing." pic.twitter.com/c7JV8544Cv

New York Times: “A study published on Monday… is the latest to suggest that Trump voters weren’t driven by anger over the past, but rather fear of what may come. White, Christian and male voters, the study suggests, turned to Mr. Trump because they felt their status was at risk.”

“Losing a job or income between 2012 and 2016 did not make a person any more likely to support Mr. Trump… Neither did the mere perception that one’s financial situation had worsened. A person’s opinion on how trade affected personal finances had little bearing on political preferences. Neither did unemployment or the density of manufacturing jobs in one’s area.”

The conservative response to that Glenn Simpson op-ed this weekend was very revealing. If Mueller finds Trump committed financial crimes, or has debts that make him vulnerable to blackmail, they’re prepared to say that’s none of our business. https://t.co/AD5W8g45TP

Politico: “Getting Michael Cohen to rat out President Donald Trump may not be as simple as it sounds. Although Trump’s detractors are rooting for Trump’s personal attorney to ‘flip’ on the president and cooperate with special counsel Robert Mueller to escape a potentially harsh prison sentence, legal obstacles make it difficult for lawyers to expose their clients’ guarded secrets.”

"Hannity is a very wealthy man. So is Donald Trump. It appears that part of the way they became rich was by decrying welfare for poor folks, then grabbing it for themselves," writes Paul Begala via @CNNOpinion https://t.co/RwZRTs2DFl

Sean Hannity’s real estate venture bought houses through a property dealer who was involved in a criminal conspiracy to fraudulently obtain foreclosed homes, according to records reviewed by the Guardian.

New York Times: “The Trump team was so impressed with Nunes that, according to the transition official, it considered bringing him into the administration. A few weeks after the election, the congressman traveled to Trump Tower, where, according to transition officials, he and Trump discussed the possibility of his becoming the director of national intelligence and overseeing an ambitious reorganization of the intelligence community. But Trump ultimately decided to shelve those plans and appoint as director a less disruptive figure, Dan Coats, a former Indiana senator. Besides, with Pompeo leaving Capitol Hill for Langley, Trump’s circle believed that Nunes would be even more valuable to the administration if he remained in Congress, running the Intelligence Committee.”

“The network of groups affiliated with billionaire conservative donors Charles and David Koch are taking a new look at which Republican candidates to support this year,” The Hill reports.

“The groups still plan to spend up to $400 million on politics and policies this election cycle, but they’re deeply frustrated by what they view as the GOP’s refusal to take up major legislation ahead of the midterm election.”

“Some of the network’s donors privately tell us that the House majority looks like a lost cause, potentially accelerating the movement of money toward protecting the Senate majority.”