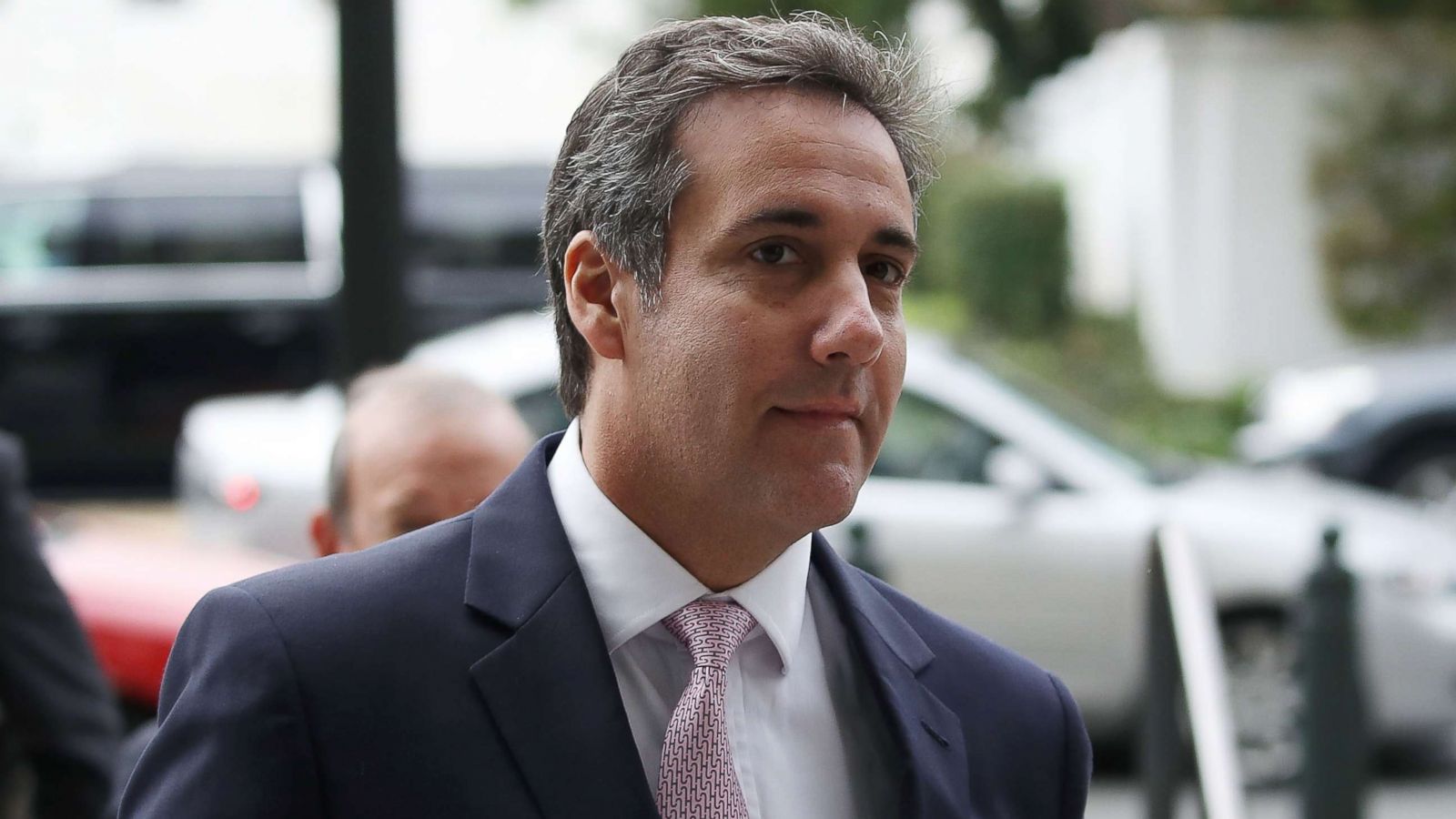 “One of President Trump’s longtime legal advisers said he warned the president in a phone call Friday that Michael Cohen, Mr. Trump’s personal lawyer and close friend, would turn against the president and cooperate with federal prosecutors if faced with criminal charges,” the Wall Street Journal reports.

“Mr. Trump made the call seeking advice from Jay Goldberg, who represented Mr. Trump in the 1990s and early 2000s. Mr. Goldberg said he cautioned the president not to trust Mr. Cohen. On a scale of 100 to 1, where 100 is fully protecting the president, Mr. Cohen ‘isn’t even a 1,’ he said he told Mr. Trump.”

“Mr. Goldberg said the volume of correspondence taken and the potential pressure the government can bring to bear on Mr. Cohen to testify puts the president in more potential peril from the Cohen matter than from Special Counsel Robert Mueller’s investigation.”  What’s most interesting is that a Trump ally seems to assume Cohen can tie the president to crimes.

Washington Post: “Trump was infuriated by the seizure of possibly sensitive correspondence involving work that Cohen — his close friend, consigliere and personal ‘fixer’ — was doing on his behalf and believed Mueller’s team was operating in bad faith.”

“Trump was so upset, in fact, that he had trouble concentrating on plans that were laid out for him that day by his national security team about potential options for targeted missile strikes on Syria… In recent days, Trump has grown increasingly agitated, railing against members of his beleaguered team.”

Cook Political Report: “The newest FEC filings spell danger for Republicans. In the most recent fundraising period, Democrats outraised Republicans in at least 60 GOP-held seats, more than twice the 23 seats Democrats need for a majority. Meanwhile, the reverse is true in just five Democratic-held seats. That’s going to force the NRCC and Congressional Leadership Fund to bail out a lot of cash-strapped GOP candidates come the fall.”

“In light of the most recent FEC filings, we’re updating our ratings in seven districts, all reflecting improved Democratic prospects.”

Mitch McConnell gives Trump the green light to move on Mueller, says he won’t permit vote on legislation to protect special counsel from being fired pic.twitter.com/JktGyj1z1u

CIA Director Mike Pompeo “made a top-secret visit to North Korea over Easter weekend as an envoy for President Trump to meet with that country’s leader, Kim Jong Un,” the Washington Post reports.

“The extraordinary meeting between one of Trump’s most trusted emissaries and the authoritarian head of a rogue state was part of an effort to lay the groundwork for direct talks between Trump and Kim about North Korea’s nuclear weapons program, according to the two people, who requested anonymity because of the highly classified nature of the talks.”

First Read: “One of the keys to President Trump’s victory in 2016 — and to his overall political survival — has been to claim, essentially: ‘Hey, I’m not Hillary Clinton.’ Indeed, voters who disliked BOTH Clinton and him ended up siding with the Republican in 2016.”

“But that talking point doesn’t work for Trump anymore, even as Clinton remains highly unpopular, according to the latest NBC/WSJ poll… voters who dislike both Hillary and Trump make up 15 percent of voters, and they are more Democratic and prefer the Dems to control Congress.”

“NBC/WSJ co-pollster Bill McInturff (R) says that the bipartisan disapprovers are clearly different voters between 2016 and now, but it’s also clear that they won’t be Republican voters in 2018 – and maybe beyond.”

In the wake of Barbara Bush's death, the media is extolling the former first lady's virtues, but the truth is more complicated than that. Here's how to make sense of her legacy. https://t.co/Q7tPiz2PTH

Josh Rogin: “More than a year into his administration, President Trump still won’t let go of primary-campaign grudges against foreign policy-minded Republicans who want to serve. And as qualified and patriotic Republicans watch how Trump treats those who do sign up, fewer and fewer are willing to come aboard. That dynamic hurts both Trump and our national security.”

“There are plenty of good jobs available. National security adviser John Bolton opened several opportunities in just the past few days — by cleaning house at the top of the National Security Council staff. Mike Pompeo, the nominee to become secretary of state, promised senators at his confirmation hearing last week that he would fill dozens of vacant diplomatic posts as soon as possible. Even at the Pentagon, plenty of top positions are still open.”

“Some of the vacancies are because of the slow confirmation process. Some are the result of infighting within the administration. But during interviews with administration officials and outside Republicans, a theme emerges: This White House makes it too difficult to serve, and treats those who do shabbily.”

“The Freedom Caucus is prepared to exact a price from Kevin McCarthy if he wants to be the next speaker of the House — three years after foiling his first bid for the job,” Politico reports.

“A survey of about 20 of the conservative group’s three dozen members found varying degrees of openness to the California Republican known as a deal-making pragmatist. But nearly all the hard-liners said he’ll have to make concessions to win their support. Without it, they could block his path to the speakership.”

In Trump's view, it was better to bomb Syria without a strategy or legal authorization than to invite doubts about the credibility of the threats he makes on social media https://t.co/UYbBi8I5Kw

Attorney General Eric Schneiderman of New York is moving to change New York state law so that he and other local prosecutors would have the power to bring criminal charges against aides to President Trump who have been pardoned, according to a letter Mr. Schneiderman sent to the governor and state lawmakers on Wednesday.

“In the span of 24 hours, U.N. Ambassador Nikki Haley has done what none of her colleagues in President Trump’s Cabinet have before: successfully telegraphed to her boss that she will not quietly suffer his public humiliations,” Politico reports.

“The incident has met with silence from the president and his loyalists but has only helped to burnish Haley’s image outside of the White House.”

Sen. Robert Menendez (D-NJ), the top Democrat on the U.S. Senate Foreign Relations Committee, said he will oppose President Trump’s nomination of Mike Pompeo as secretary of state, “making it unlikely he will have the committee’s backing before the full Senate votes,” Reuters reports.

“Pompeo, currently director of the Central Intelligence Agency, can still be confirmed by the full Senate without the committee’s support. However, he would be the first secretary of state nominee, at least since such votes were made public in 1925, not to win the panel’s backing.”

Washington Post: “Inside a closed-door meeting of lawmakers at the Capitol Hill Club, Ryan told his fellow Republicans that he had spoken to virtually all of the top GOP donors with whom he has developed relationships over his two-and-a-half years as speaker and had gotten assurances that they would continue to give through the 2018 cycle.”

“That was widely interpreted as a direct rebuttal to fears that Ryan’s fundraising would drop off a cliff as he remains a lame duck — which emerged last week as a prime argument for a quicker departure. Ryan said … that no fundraisers have been canceled and that he fully intended to maintain, if not exceed, his current fundraising pace in the coming months.”

Trump's new claim is that the search of Michael Cohen's office shows Mueller is operating in bad faith.

He's angry that *legitimate* law enforcement processes are being applied *to him.*

Sen. Bob Corker (R-TN), who once described the White House as an “adult day-care center,” lamented that President Trump governs in a state of “constant chaos” and denounced his attacks on federal law enforcement agencies, the media and other U.S. institutions, the Washington Post reports.

As Trump told NBC News: “In fact, when I decided to just do it I said to myself, ‘you know, this Russia thing with Trump and Russia is a made up story. It’s an excuse by the Democrats for having lost an election that they should have won.’”

Moving on from Comey’s 2016 decisions isn’t strategically wise. It is allowing history to repeat itself. https://t.co/aKCtPBHBgU pic.twitter.com/RAwhRBVSlR

“New projections on the size of the federal deficit and the price tag of President Trump’s tax-cut law have left some Republican senators nervous about voting on another tax package before the election,” The Hillreports.

“While the GOP on Tuesday used Tax Day to proclaim the success of last year’s $1.5 trillion tax cut, there is some unease about doubling down on the issue in the coming months. Some in the party want to go on offense and try to make permanent the individual tax cuts that were part of last year’s legislation.”

President Trump “is undermining voter support for the Tax Cuts and Jobs Act with erratic messaging after it was gaining popularity, alarming Republicans counting on the law to save the party’s vulnerable House majority,” the Washington Examiner reports.

“Senior Republicans are declining to publicly finger Trump for the heralded tax overhaul’s sagging approval ratings. Views of the law steadily climbed during the first two months of the year on the strength of a unified push from the White House and Capitol Hill ahead of the midterm.”

“Privately, Republicans complain that the president’s sudden shift to tariffs, with threats of trade wars, distracted from the positive impacts of $1.3 trillion in tax cuts and allowed Democrats to regain the upper hand. Concluding that Trump is unreliable, Republicans say it’s their responsibility to turn public opinion around.”