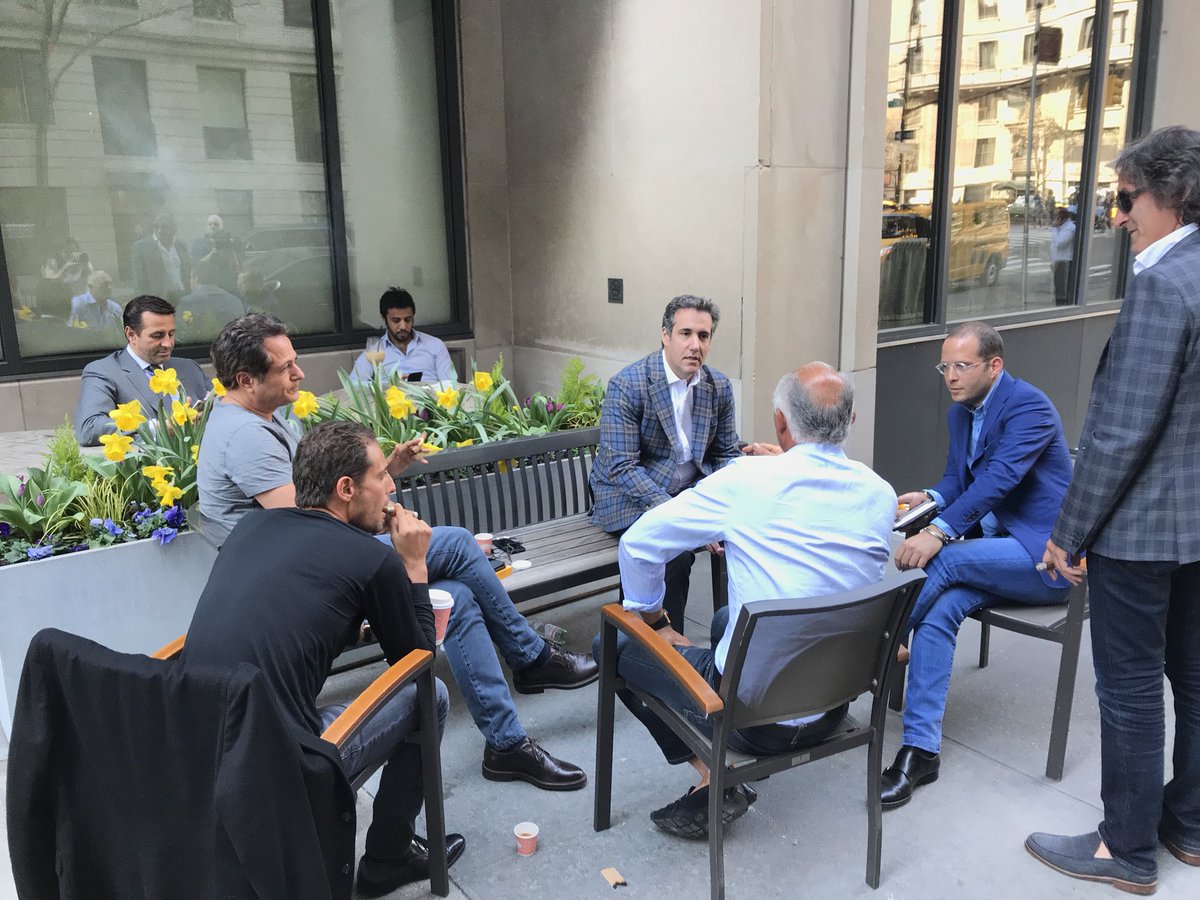 Martin Longman says if Michael Cohen went to Prague, then it is all over:   “If Michael Cohen went to Prague, then Donald Trump will be impeached, convicted, and removed from office, assuming he doesn’t resign. Digby says it is the whole enchilada, and she’s right.  […] I suppose some of you want to know why it will be so consequential if Cohen has been lying about traveling to Prague in 2016. I may write that piece tomorrow, but for today it should suffice that the central accusation of the Steele Dossier is that Cohen was the Trump’s campaign’s main contact with the Russians after Paul Manafort was fired, and that he went to Prague because Moscow would have been too obvious. While there, he colluded with the Russians on a host of issues, including on how to compensate Romanian hackers, how to manage the fallout from the Manafort flameout and how to explain Carter Page’s recent trip to Moscow. […]

Trump was not a bystander in the cover story [that Cohen did not go to Prague]. He publicly claimed that when the Prague story first emerged he was suspicious enough to call Cohen into his office and demand that he produce his passport. He then claimed, falsely, that a different Michael Cohen had been at the meetings with the Russians, as if that would make any kind of sense.   Cohen could have gone to Prague for some innocent reason, but he would have explained his reasoning for making the trip in that case instead of concocting cover stories and claiming [falsely] that he was in Los Angeles during the times in question.  If he was in Prague, he was there for the reasons the Steele dossier said he was there. And if that is the case, then the case for collusion is proven beyond any shadow of a doubt.”

Michael Cohen and the End Stage of the Trump Presidency https://t.co/nTBNbYLHJw

Adam Davidson: “This is the week we know, with increasing certainty, that we are entering the last phase of the Trump Presidency. This doesn’t feel like a prophecy; it feels like a simple statement of the apparent truth. I know dozens of reporters and other investigators who have studied Donald Trump and his business and political ties. Some have been skeptical of the idea that President Trump himself knowingly colluded with Russian officials. It seems not at all Trumpian to participate in a complex plan with a long-term, uncertain payoff.”

“However, I am unaware of anybody who has taken a serious look at Trump’s business who doesn’t believe that there is a high likelihood of rampant criminality.”

“Of course Trump is raging and furious and terrified. Prosecutors are now looking at his core. Cohen was the key intermediary between the Trump family and its partners around the world; he was chief consigliere and dealmaker throughout its period of expansion into global partnerships with sketchy oligarchs. He wasn’t a slick politico who showed up for a few months. He knows everything, he recorded much of it, and now prosecutors will know it, too. It seems inevitable that much will be made public. We don’t know when. We don’t know the precise path the next few months will take. There will be resistance and denial and counterattacks. But it seems likely that, when we look back on this week, we will see it as a turning point. We are now in the end stages of the Trump Presidency.”

NEW: Trump reportedly raged at staffers when the expulsion of 60 Russian diplomats was announced. He was so furious about the # of diplomats & about the U.S. being portrayed as taking a tough stance on Russia that he screamed expletives at WH officials. https://t.co/3VZMYexrWW

Paul Krugman: “Incredibly, I’m seeing some news reports about his exit that portray him as a serious policy wonk and fiscal hawk who, sadly, found himself unable to fulfill his mission in the Trump era. Unbelievable.”

“Look, the single animating principle of everything Ryan did and proposed was to comfort the comfortable while afflicting the afflicted. Can anyone name a single instance in which his supposed concern about the deficit made him willing to impose any burden on the wealthy, in which his supposed compassion made him willing to improve the lives of the poor?”

“And his ‘deficit reduction’ proposals were always frauds. The revenue loss from tax cuts always exceeded any explicit spending cuts, so the pretense of fiscal responsibility came entirely from ‘magic asterisks’: extra revenue from closing unspecified loopholes, reduced spending from cutting unspecified programs. I called him a flimflam man back in 2010, and nothing he has done since has called that judgment into question.”

Paul Ryan’s announcement Wednesday that he’s retiring has crystalized the perception that the House GOP is in for a drubbing. “It’s over,” one GOP operative said. https://t.co/T6IYmBQ1Rz

Max Boot: “It is hard to imagine how Trump can do his job — for example, approving military strikes on Syria — while drowning in this rising tide of scandal. There is an old tradition, more honored in theory than fact, that issues of national security are kept separate from domestic politics, but Trump is utterly incapable of making any such distinction. For him, everything is political — and all politics is personal.”

“It’s hard to imagine that Trump, who in the best of times has the attention span of a hyperactive 8-year-old, can focus on strategy for Syria amid the far more pressing threats that he faces from an ever-expanding criminal investigation. If the United States had a parliamentary government, Congress could pass a motion of ‘no confidence,’ thus allowing Trump to devote 100 percent of his attention to fighting the multiplying charges against him without the distractions of running the government. Instead, we must hope that the institutions of the U.S. government are strong enough to function more or less on autopilot while Trump is consumed by the wages of his own sins.”

"Most important thing we know is that a neutral, detached federal judge has nothing to do with politics signed off on this warrant"

As to Trump’s criticizing Mueller, "I don't know what Mueller was supposed to do other than what he did” pic.twitter.com/nsbLD4WdCH

Kentucky Gov. Matt Bevin (R) lashed out against teachers participating in a statewide protest, saying they exposed some of the “hundreds of thousands” of children to sexual assault and drug use by walking out of class, the Washington Post reports.

“One of the women, a former Playboy model named Karen McDougal, sold the rights to her story for $150,000 to American Media Inc., the publisher of The National Enquirer. The other woman, Stephanie Clifford, a pornographic film actress known as Stormy Daniels, received a payment of $130,000 that Mr. Cohen said came out of his own pocket.”

“Both of the women were represented by Keith M. Davidson. Mr. Davidson also represented the woman in the agreement Mr. Cohen struck on behalf of Mr. Broidy, further establishing a pattern of collaboration between the lawyers in striking for-pay accommodations to silence women’s allegations about powerful men.”

All three women were “represented” by the same lawyer?

EXCLUSIVE BREAKING: Former first lady Barbara Bush is in failing health, a source close to the family tells CNN. Bush, who has been suffering for some time, is being cared for at her Houston home and has decided not to go back into the hospital. https://t.co/gu7qwQ835Z pic.twitter.com/PRbKZkwpYp

“A federal judge late Friday barred the federal government from implementing President Trump’s ban on transgender members of the military, finding that the ban had to be subject to a careful court review before implementation because of the history of discrimination against transgender individuals,” the HuffPostreports.

Stan Collender: “Think about this. The same congressional Republicans who over the previous eight years wanted everyone to believe they were fiscal conservatives hell bent on balancing the budget and not increasing the national debt, sponsored, passed and then danced around the fire because of legislation that will result in a permanent $1 trillion deficit and a debt that will soar to close to 100 percent of GDP by 2028.”

“And…House and Senate Republicans were enabled by a GOP president who during his campaign said he would eliminate the deficit and completely pay off the debt.”

“But the rise of Donald Trump shocked and dismayed Klarman, as did the timid response from the Republican-controlled House and Senate, which have acquiesced rather than challenge the president’s erratic and divisive ways. So, in an astonishing flip, Klarman, at one point New England’s most generous donor to Republicans, is taking his money elsewhere: He’s heaping cash on Democrats.”

Meanwhile, the RNC “has committed $250 million to a midterm election strategy that has one goal above all else: Preserve the party’s House majority for the rest of President Trump’s first term,” the AP reports.  “Facing the prospect of a blue wave this fall, the White House’s political arm is devoting unprecedented resources to building an army of paid staff and trained volunteers across more than two dozen states. The RNC is taking the fight to Senate Democrats in Republican-leaning states, but much of the national GOP’s resources are focused on protecting Republican-held House seats in states including Florida, California and New York.”

“Trump is doing so through a sweeping executive order that was quietly issued earlier this week — and that largely flew under the radar.”

“It calls on the Departments of Health and Human Services, Housing and Urban Development, Agriculture and other agencies across the federal government to craft new rules requiring that beneficiaries of a host of programs work or lose their benefits.”

Trump’s America First media allies think he has betrayed them with the Syria strike https://t.co/eFooCUrG6G

Sen. Bob Corker (R-TN) lamented that his recent vote for the GOP tax bill could be one of the worst of his career if projections that it will add nearly $2 trillion to the deficit prove to be accurate, the Tennesseanreports.

Said Corker: “None of us have covered ourselves in glory. This Congress and this administration likely will go down as one of the most fiscally irresponsible administrations and Congresses that we’ve had.”

He also said that the recent spending bill was it “one of the most grotesque pieces of legislation I can remember.”

Ross Douthat: “The mistake about Paul Ryan, the one that both friends and foes made over the years between his Obama-era ascent and his just-announced departure from the House speakership, was to imagine him as a potential protagonist for our politics, a lead actor in the drama of conservatism, a visionary or a villain poised to put his stamp upon the era.”

“But the real Ryan was never suited for these roles. He was miscast as a visionary when he was fundamentally a party man — a diligent and policy-oriented champion for whatever the institutional G.O.P. appeared to want, a pilot who ultimately let the party choose the vessel’s course. And because the institutional G.O.P. during his years was like a bayou airboat with a fire in its propeller and several alligators wrestling midship, an unhappy end for his career was all-but-foreordained.”

“The Supreme Court is set to hear a seemingly minor case later this month on the status of administrative judges at the Securities and Exchange Commission, an issue that normally might only draw the interest of those accused of stock fraud,” the Los Angeles Times reports.

“But the dispute turns on the president’s power to hire and fire officials throughout the government. And it comes just as the White House is saying President Trump believes he has the power to fire special counsel Robert Mueller.”