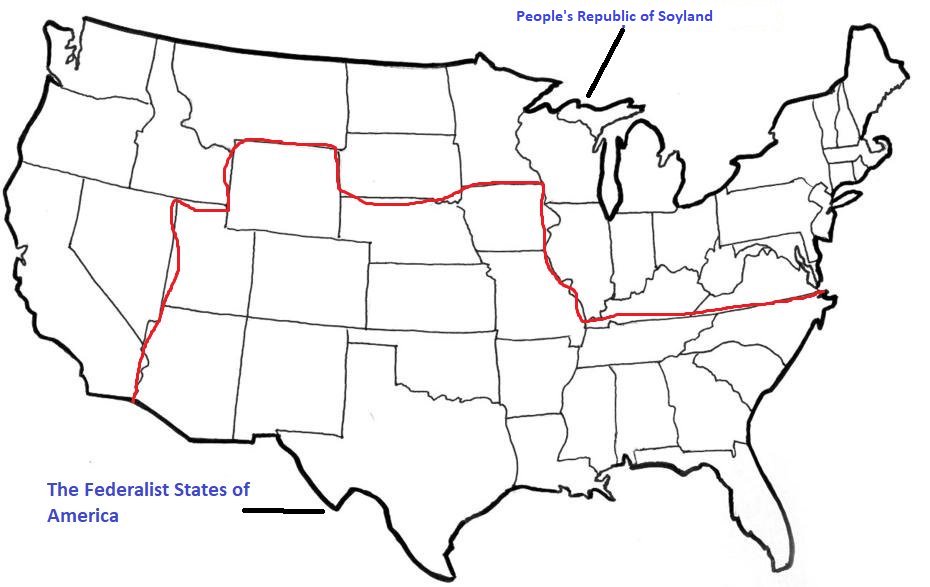 Commenter Anono dropped this link into yesterday’s open thread. He dropped it without comment so it’s obviously something he wanted us to read and something he thinks has value. Value as a good idea or value as a warning? I’m leaning towards both.

The article is ridiculous, and not well thought out. It replaces the word secession with divorce, but my guess is that’s simply a way to demand dividing assets. LOL! That’s not how it works.

Divorce is hard, but it’s easier than cutting the brake lines on your wife’s car. It is long past time for an amicable divorce of the United States of America. There is simply no common ground with the Left anymore. We are now the couple screaming at each other all night, every night as the kids hide in their room.

We cannot come together, but we do not have to live like this. The history of the world is nations breaking up and redrawing their borders. If we want to avoid this political divide turning into a deadly one, we should do likewise.

Quite an opener, no?  This guy talks about cutting the brake lines in your wife’s car and then warns about a political divide turning deadly. And I got in trouble for referring to a dumpster fire. Oh, and he has examples:

The 1960s counter-culture liberal protestor who just wanted free weed and an end to the war in Vietnam has been replaced by a man who hunts down Steve Scalise and tries to kill him at baseball practice. The Left is not playing games. They are getting bolder, and they are getting more violent. They have no interest in rational compromises. Like all authoritarian ideologies, they want you to bow down before them or be destroyed for daring to resist.

He describes the liberal protester as: “some hippie chick with armpit hair at a vegan rally”. This view is consistent in conservative circles. All it really boils down to is a sophomoric way of saying, “I wouldn’t do her.” Can’t be a conservative article without misogyny!

About that shooter mentioned… Well, lookee here! We’ve found the one shooter not labeled a lone wolf. Wonder why he doesn’t mention the guy who shot up Planned Parenthood? Or the guy who shot Dr. Tiller? Or the guy who killed Heather Heyer? Or Dylann Roof? (I could go on. And on. And on.) For some reason he ignores all of those incidents (and many more). It doesn’t suit the narrative he’s making up.

If you believe in God and limited government, here are the entities that now proclaim their hatred of you in full view of the public: The Democratic Party, media, Hollywood, the public education system, and now even corporate America. The GOP may have the House, Senate, and presidency, but we have completely lost the culture war.

Why, yes. Yes, you have lost the culture war. Maybe part of that reason is the fact that your actions make me question your belief in God and limited government. Have you looked at the deficit projections recently?

Then he draws a map.

Does he realize that his new country is mostly comprised of states that rely on federal welfare?

But this new country he fantasizes about is in trouble before it starts. Taxes will be slashed (if they exist at all) so I guess there goes infrastructure, the military, schools, trash collection, etc.. Abortion will be banned; contraception will also be on the chopping block. Is there a plan for all these unplanned births? Is there a plan for helping poor women and men afford contraception? Or are they just going to keep adding babies to families who can’t support them? Is there a plan to help poor families? No LGBTQ anymore. It will return to the closet where all those good, wide-stance conservatives keep it already. They’ll bring back “No coloreds allowed” signs! The list is endless… and ugly.

How would this even work? Is there a plan for a liberal in Georgia to switch houses with a conservative in Oregon? Seriously, conservatives need to flesh this plan out – and you’d think they would given the amount of times they write about it.

He ends with more fear mongering (cause that’s all he’s got):

Every issue plays out this same way, and people on the Right will only accept this kind of abuse for so long. Sooner or later, the left-wing rage mob will start coming for the careers (and lives) of any normal American who sees things differently.

This idea of breaking up the country may seem a bit outlandish now, but you won’t think so once real domestic unrest comes to your town. Our political disagreements have become a powder keg, one that already would have blown if conservatives had liberals’ emotional instability.

I don’t even know what to make of that bit of revisionist history. Left-wing rage mob coming for your careers and lives! That’s the fantasy they’ve built around their guns – and they seem to have an itchy trigger finger.

Have at it. My head hurts. There’s only so much idiocy I can take.

19 comments on “Secession Is A Conservative Fantasy”