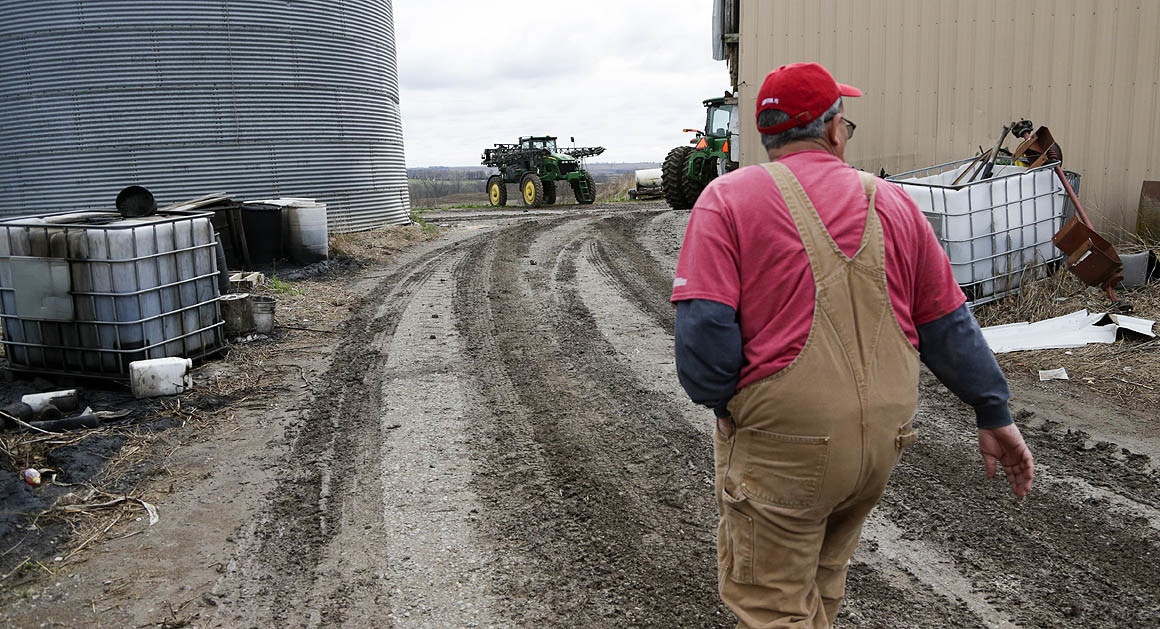 “As President Trump moves to fulfill one of the central promises of his campaign — to get tough on an ascendant China — he faces a potential rebellion from a core constituency: farmers and other agricultural producers who could suffer devastating losses in a trade war,” the New York Times reports.  “Mr. Trump’s threat to impose tariffs on Chinese goods came with a presidential declaration that trade wars are good and easily won. But the action has injected damaging uncertainty into the economy as Republicans are already struggling to maintain their hold on the House and the Senate in a difficult election year.”

After John Kelly told Bret Baier that Trump’s immigration views had not been “fully informed” during the campaign and had since “evolved,” Trump berated Kelly in the Oval Office — his shouts so loud they could be heard through the doors, WaPo reports. https://t.co/25KmxkkZW4

Mike Allen: “President Trump may try to hit ‘undo’ on a slice of the $1.3 trillion spending bill that he signed last month after threatening a veto, and now regrets.”

“Republican aides in the House and Senate tell me they’re working with the White House on a possible plan to rescind billions of dollars — and perhaps tens of billions.”

“The proposal may not be ready for a couple of weeks, the aides said.Conversations have included a target up to $60 billion , but Republicans on the Hill say it would need to be less than that.”

To review: There was a fire in the residential section Trump Tower where there are no sprinklers, in part because Trump lobbied against regs requiring them. Someone died, which Trump didn’t mention, instead praising the safety of his building. https://t.co/KMBe7O6Im7

President Trump “promised a ‘big price’ to be paid for what he said was a chemical weapons attack that choked dozens of Syrians to death the day before, and a top White House official said the administration would not rule out a missile strike to retaliate against the government of President Bashar al-Assad,” the New York Times reports.

“In a tweet, Mr. Trump laid the blame for the attack partly on President Vladimir Putin of Russia, the first time since his election that he has criticized the Russian leader by name on Twitter.”

Yeah, if only Obama had listened to the advice of Trum— pic.twitter.com/PHX0I8lrDj

The New York Times reports that the Kushner family appears to have “struck a deal to buy out” an investor’s stake in the “troubled” 666 Fifth Avenue property, which is a primary piece of its “real estate empire.”

Axios: “How they got the money is unclear. Questions had been raised about Kushner meetings with foreign big shots like Qatar as part of securing the financing. Per the Times, negotiations with foreign entities drew scrutiny because of Jared Kushner’s role in his father-in-law’s White House.”

Richmond Times-Dispatch: “It’s been four years since he spent much time behind the wheel. McAuliffe got used to someone else doing the driving. With a laugh, he says he could get used to it again. Three months after leaving the Virginia governorship, the perquisites of which included a lumbering black SUV driven by a state trooper, McAuliffe is considering a second act: the presidency… These days, McAuliffe is doing what national prospects are supposed to do: traveling to key states, plumping for his party’s candidates, tweeting, talking — and listening.”

SWAMP >> An Oklahoma buddy of Pruitt's helped Pruitt get $973,000 in mortgages to buy a lavish home even though Pruitt earned just $38,400.
That buddy was banned from the banking industry, but Pruitt named him to oversee the nation's Superfund program. https://t.co/YxFeqzECQG

Rolling Stone: “The NRA spent an unprecedented $30 million to install Trump in the White House. Putin has a long track record of illegally financing nationalist opposition groups in the West. If the Kremlin’s NRA outreach culminated in pumping vast sums into the group’s coffers, America’s lax campaign-finance regulations would have posed no obstacle.”

“The notion that the flag-waving NRA of Eddie Eagle has allied itself with the Russian bear, and the government of former KGB colonel Vladimir Putin, can be hard to fathom. But an investigation by Rolling Stone establishes deeper ties between the NRA and Russia than previously reported. The record reveals this union was the product of a sophisticated Russian influence campaign nearly a decade in the making.”

Many of the products branded by Ivanka Trump’s fashion and clothing line are manufactured in China.

One Chinese industry that is notably not subject to those new U.S. tariffs: the clothing manufacturing industry. https://t.co/IwD3imIIAX

Politico: “It was far from the first time President Trump’s eldest son dabbled in online conspiracy theories, using his 2.7 million Twitter followers to promote questionable or outright false information that, in many cases, even his father had refrained from spreading.”

“The 40-year-old Trump Jr. has emerged as one of his father’s key ambassadors to the fringe, promoting theories that added drama and visceral energy to the grass-roots right: in this case, the fast-growing theory that tech giants are arrayed against conservatives.”

“In the recent past, Trump Jr. has spread stories about the ‘deep state’ to push for the release of a GOP memo on alleged FBI wrongdoing, liked and shared tweets questioning the motives of a Parkland, Florida, student who is pushing for gun control and liked actor James Woods’ tweet that ‘more known Democrats have murdered people with guns than all @NRA members combined.’”

New York Times: “As Republican leaders scramble to stave off a Democratic wave or at least mitigate their party’s losses in November, a strategy is emerging on the right for how to energize conservatives and drive a wedge between the anti-Trump left and moderate voters: warn that Democrats will immediately move to impeach President Trump if they capture the House. What began last year as blaring political hyperbole on the right — the stuff of bold-lettered direct mail fund-raising pitches from little-known groups warning of a looming American ‘coup’ — is now steadily drifting into the main currents of the 2018 message for Republicans.

“The appeals have become a surefire way for candidates to raise small contributions from grass-roots conservatives who are devoted to Mr. Trump, veteran Republican fund-raisers say. But party strategists also believe that floating the possibility of impeachment can also act as a sort of scared-straight motivational tool for turnout.”

McCain: Trump 'emboldened' Assad with comments on US withdrawal from Syriahttps://t.co/qbU3JKjlss

Josh Kraushaar: “With 11 states holding primaries next month, a clear pattern is emerging from the messages of GOP candidates across the country: They’re all aboard the Trump train. In Indiana, all three of the candidates vying to challenge Sen. Joe Donnelly are testing messages that mimic themes from Trump’s successful presidential campaign. In West Virginia, one of the GOP Senate candidates launched an ad showing a boulder crashing on the Capitol, with a distinctly Trumpian message of ‘blowing up’ Washington. Down-ballot GOP candidates running in competitive primaries, even those in suburban districts, privately concede there’s no benefit to creating any space between their campaigns and the White House.”

“If the acquiescence of Republicans running in red states isn’t convincing enough, just look at the actions of some of the biggest Trump critics of yesteryear. Arizona Senate candidate Martha McSally, who didn’t endorse Trump in her 2016 House race, is now a reliable cheerleader for the president. Sen. Ted Cruz, who became Trump’s top GOP enemy during the convention, made amends with the president and has embraced a general-election campaign centered on cultural issues—even in a diversifying state where Democrats have gained some ground.”