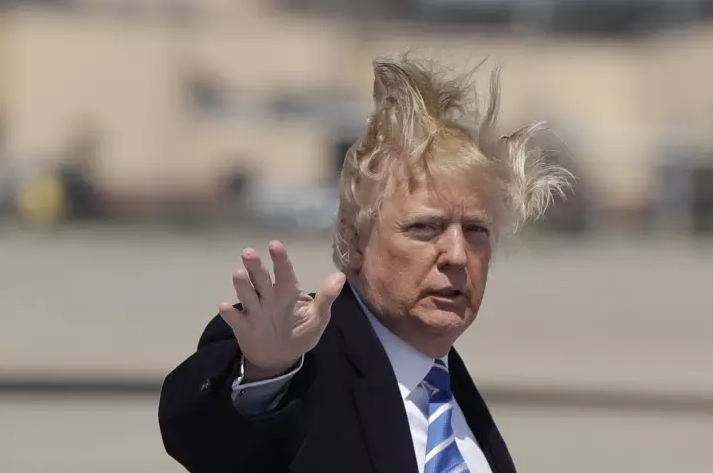 President Trump was supposed to talk about the new tax law in West Virginia today, but he “tossed the script — literally,” the Washington Post reports.  Said Trump: “This was going to be my remarks. It would’ve taken about two minutes, but… That would’ve been a little boring, a little boring. Now I’m reading off the first paragraph, I said this is boring. Come on. We have to say, tell it like it is.”  He then threw his speech into the air.

“Rather than zeroing in on a focused message about the tax cuts that congressional Republicans believe is the key to retaining their majorities this fall, Trump launched into a rambling diatribe of red-meat rhetoric that had nothing to do with the tax law.”

He talked about the results of the 2016 election, immigration, obstruction of justice by the Mayor of Oakland, sanctuary cities, “liberating” towns from the dreaded MS-13, his idea that millions of people cast illegal votes in California, because they are Latinos.  Then Chain Migration, NAFTA, the wall, and then he lied about this “caravan” of refugees who are fleeing violence and rape in Latin America by saying that they, the victims of violence and rape, are actually violent and rapists.

"Armed with subpoenas compelling electronic records and sworn testimony, Mueller’s team showed up unannounced at the home of the business associate, who was a party to multiple transactions connected to Trump’s effort to expand his brand abroad"https://t.co/yyxN7KcYOu

“EPA chief Scott Pruitt and his allies in the administration are on a mission to save his job — offering a blitz of interviews to friendly media outlets while separately accusing a former agency staffer of a cascade of damaging leaks. But the White House made it clear Wednesday that President Trump is not pleased with all the negative headlines surrounding him,” Politico reports.

“Pruitt’s challenges appeared to deepen when White House press secretary Sarah Huckabee Sanders — asked why Trump is ‘OK’ with the leader of the Environmental Protection Agency renting a condo from a lobbyist for $50 a night — responded that ‘the president’s not.’”

The Daily Beast reports White House chief of staff John Kelly called Pruitt to say that, “though he has the full public confidence of President Trump for now, the flow of negative and damning stories needed to stop soon.”

Jonathan Swan: “If nothing else bad comes out against Pruitt, they’ll probably ride through the storm with him. But should more damaging stories surface — especially ones that demonstrate poor ethical judgement — Pruitt could be abandoned in a flash. Trump is uneasy about the situation, and has his finger in the wind.”

Straight up wild reporting by @EricLiptonNYT and @kenvogel on Pruitt. Demotions for people who questioned his spending on furniture, sirens to get to Le Diplomate for dinner: https://t.co/zBqj4N1BWP

“At least five officials at the Environmental Protection Agency, four of them high-ranking, were reassigned or demoted, or requested new jobs in the past year after they raised concerns about the spending and management of the agency’s administrator, Scott Pruitt,” the New York Times reports.

“The concerns included unusually large spending on office furniture and first-class travel, as well as certain demands by Mr. Pruitt for security coverage, such as requests for a bulletproof vehicle and an expanded 20-person protective detail, according to people who worked for or with the E.P.A. and have direct knowledge of the situation.”

Why does Trump need to keep Pruitt around?

“President Trump floated replacing Attorney General Jeff Sessions with Scott Pruitt as recently as this week, even as the scandal-ridden head of the Environmental Protection Agency has faced a growing list of negative headlines,” CNN reports.  Said a source: “He was 100% still trying to protect Pruitt because Pruitt is his fill-in for Sessions.”

You see, Pruitt is Trump’s kind of guy: overwhelmingly corrupt.   He needs Pruitt to stay alive so he can fire Sessions and immediately replace him with the pliant Pruitt, who will then obey any order Trump gives him, no matter how illegal, unethical, treasonous or unconstitutional.

Former White House aide Rob Porter “is reportedly a source of information about EPA Administrator Scott Pruitt’s ethical transgressions that are threatening his future at the agency, after Porter’s relationship with a top former Pruitt aide soured,” Inside EPA reports. “Porter did not respond to requests for comment but two sources say he leaked information about Pruitt after Samantha Dravis, his former girlfriend resigned last week.”

Plenty of conservatives really do believe women should be executed for having abortions https://t.co/o3YRmHXeAH

“An emboldened President Trump is discovering that the policies he once described as easy fixes for the nation are a lot more complicated in reality — creating backlash among allies, frustrating supporters and threatening the pocketbooks of many farming communities that helped get him elected,” the Washington Post reports. “Freed from the caution of former advisers, Trump has spent recent weeks returning to the gut-level basics that got him elected: tough talk on China, a promise of an immigration crackdown and an isolationist approach to national security.”

“Several people who have spoken to the president say he is telling advisers that he is finally expediting the policies that got him elected and is more comfortable without a number of aides around him who were tempering his instincts. And he often cites rising poll numbers in recent weeks as a reason he should do it his own way.”

Open Secrets discovered that Robert Mercer backed a secretive group that worked with Facebook, Google to target anti-Muslim ads at swing voters in the final weeks of the 2016 presidential election.  Ads like this:

“As a 501(c)(4) social welfare organization, Secure America Now (SAN) is not required to disclose its donors to the public, but they are required to report them to the IRS. This information is usually redacted when provided for public inspection. However, when OpenSecrets called to request a 2016 return, an unredacted return was provided by the group’s accounting firm.”

How local news stations are rebelling against their Sinclair overlords: https://t.co/2MI4awtG0M pic.twitter.com/76lXMwN5vG

A new Middle Tennessee State University poll in Tennessee finds Phil Bredesen (D) has a 10-point lead over Rep. Marsha Blackburn (R-TN) in the race to succeed Sen. Bob Corker (R-TN), 45% to 35%, with 17% still not sure.

Mike Allen: “To White House insiders, this is the most dangerous phase of Donald Trump’s presidency so far, from the brewing trade war with China that he denies is a trade war, to the perilously spontaneous summit with North Korea.”

“Checks are being ignored or have been eliminated, and critics purged as the president is filling time by watching Fox, and by eating dinner with people who feed his ego and conspiracy theories, and who drink in his rants. Both sides are getting more polarized and dug in — making the daily reality more absurd, and the potential consequences less urgent and able to grab people’s serious attention.”

“Trump’s closest confidants speak with an unusual level of concern, even alarm, and admit to being confused about what the president will do next —  and why.”

Here is what recent court filings tell us about how Robert Mueller is running his investigation. @cristianafarias writes https://t.co/mR2nECiCdl

New York Times: “It was the kind of story destined to take a dark turn through the conservative news media and grab President Trump’s attention: A vast horde of migrants was making its way through Mexico toward the United States, and no one was stopping them.”

“The story of ‘the caravan’ followed an arc similar to many events — whether real, embellished or entirely imagined — involving refugees and migrants that have roused intense suspicion and outrage on the right. The coverage tends to play on the fears that hiding among mass groups of immigrants are many criminals, vectors of disease and agents of terror. And often the president, who announced his candidacy by blaming Mexico for sending rapists and drug dealers into the United States, acts as an accelerant to the hysteria.”

Washington Post: “A total of 11.8 million Americans signed up for Affordable Care Act health insurance for 2018, a drop of just 400,000 from the previous year despite widespread predictions that enrollment would plummet amid political and insurance industry turbulence surrounding the law.”

“The final figures, released Tuesday by the Centers for Medicare and Medicaid Services, show that the proportion of first-time customers for this year dipped slightly, from 31 percent to 27 percent, while the high proportion qualifying for government subsidies that help consumers afford their insurance premiums stayed level at 83 percent.”

In the Trump era, House Speaker Paul Ryan must placate a president who has no interest in his agenda, and in many cases — like on immigration, trade, and entitlement reform — breaks with the party altogether.

It explains why he might be ready to quit. https://t.co/pUjAPH3teg pic.twitter.com/UEsDqE79wq

Forbes: “In March, The Rachel Maddow Show finished as the highest-rated show in cable news, with an average total audience of 3.058 million viewers–the show’s best-ever performance in the 9 p.m. ET hour. FNC’s Hannity was second, with 3.000 million viewers. Maddow also won among viewers 25-54, the demographic most valued by advertisers, finishing March with an average audience of 671,000 compared to Hannity’s 616,000. CNN finished a distant third in the hour, with 382,000 viewers 25-54.”

Missouri Gov. Eric Greitens (R) “has been served a subpoena by Attorney General Josh Hawley as part of an investigation into the governor’s use of the resources of a veterans’ charity for his 2016 gubernatorial campaign,” the Kansas City Star reports.  “Issues surrounding the Greitens campaign’s use of a donor list belonging to The Mission Continues have dogged the governor since shortly before the 2016 election.”

Among other reasons Dems remain convinced the probe ended prematurely: Roger Stone never gave his "I dined with Assange" email to the House Intelligence Committee, Schiff told me. https://t.co/UJ10z7uEYm

“Twitter DMs obtained by BuzzFeed News show that in the summer of 2016, WikiLeaks was working to obtain files from Guccifer 2.0, an online hacktivist persona linked to by Russian military intelligence, the clearest evidence to date of WikiLeaks admitting its pursuit of Guccifer 2.0.”

President Trump said that “he did not know that his personal attorney paid adult film star Stormy Daniels $130,000 days before the presidential election to prevent her from publicly accusing Trump of having an affair,” the Washington Post reports.

“The president said he did not know where his attorney, Michael Cohen, got the money for the payment, and he declined to say if he ever set up a fund for Cohen to cover expenses like that.”

President Trump said that he “will consider hitting China with an additional $100 billion in tariffs, on top of the $50 billion the White House has already authorized, escalating threats of a trade war with the Chinese that his top advisers had tried to minimize a day earlier,” the New York Times reports.

“Mr. Trump’s threat of additional tariffs is a marked escalation of a trade dispute that could have global economic ramifications and derail the economic expansion underway.”

Jonathan Swan: “This is exactly what the free traders who formerly worked in the White House feared, Trump in a macho pissing match against Chinese President Xi. Trump has a blunt understanding of leverage and believes the worst thing he can show is weakness.”