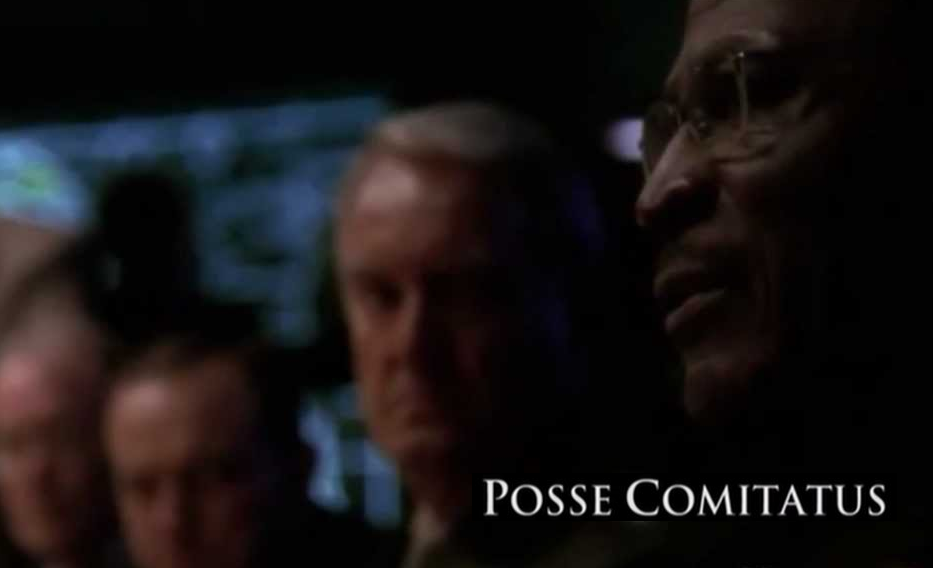 POSSE COMITATUS. “President Trump said that he planned to order the military to guard parts of the southern border until he can build a wall and tighten immigration restrictions, proposing a remarkable escalation of his efforts to crack down on migrants entering the country illegally,” the New York Times reports.

Said Trump: “Until we can have a wall and proper security, we’re going to be guarding our border with the military. That’s a big step. We really haven’t done that before, or certainly not very much before.”

Politico: “A senior official at the Department of Homeland Security said Tuesday that putting troops on the U.S.-Mexico border had been under discussion but that no roll-out had been planned because of unresolved policy issues. The official said Secretary of Defense James Mattis did not want armed troops at the border.”

It’s also illegal.  Someone tell someone in this corrupt fascist Administration about the Posse Comitatus Act.

Josh Marshall: “[T]he Posse Comitatus Act makes two things clear. 1) Soldiers and other military personnel can’t enforce US laws within the United States and 2) They can’t detain or search people or do most of the things that usually go along with police authority in the United States. There are other things they can’t do. But those are the key ones relevant to the border.

Profound economic forces will make it less and less viable for families to raise children unless policymakers step in with more help.

(aka george will is wrong about parental leave) https://t.co/iP1Fmv1csr

TRUMP SHOULD LOVE FAKE NEWS. A new Ohio State University study finds that fake news probably played a significant role in depressing Hillary Clinton’s support on Election Day. The study suggests that about 4% of Barack Obama’s 2012 supporters were dissuaded from voting for Clinton in 2016 by belief in fake news stories.

MUELLER TIME. “A Dutch lawyer tied to former Trump deputy campaign chairman Rick Gates who admitted to lying to special counsel Robert Mueller’s team was sentenced Tuesday to 30 days in jail and ordered to pay a $20,000 fine,” CNN reports.  “Alex van der Zwaan is the first person to be sentenced in Mueller’s investigation into Russian interference in the 2016 election.”

“Mueller was also empowered by Rosenstein to investigate Manafort’s payments from Ukrainian politicians, a cornerstone of the Trump adviser’s decades-long lobbying career that has resulted in several financial criminal charges so far.”

“The revelation of the August 2 memo comes amid a broader court filing from Mueller’s prosecutors that offers a full-throated defense of their investigative powers and indictments thus far.”

Finally, “Mueller has asked questions about the work of a private consulting firm that has undertaken projects for the United Arab Emirates… suggesting his probe is looking more deeply at foreign influence in Washington,” the Wall Street Journal reports.

“So, Trump will likely be seeking reelection in 2020 at a time when nearly half the 240 million adults in the US are users of Amazon Prime.”

“Does he really want to have a fight over whether Amazon should have to pay higher prices for shipping — which, in turn, would likely mean a higher Prime membership fee, or maybe even an end to free two-day shipping?”

But what about when the president does it? #VelshiRuhle pic.twitter.com/xWHB3wSRDB

Vanity Fair: “For the first time in Donald Trump’s presidency, the West Wing soap opera appears to be in hiatus, with many of its starring characters (Gary Cohn, Hope Hicks) either permanently offstage or with much reduced roles (John Kelly, Jared Kushner). Currently, there’s one star—a situation Trump is obviously enjoying—and his new freedom is used to focus ever more closely on his perceived enemies and obsessions. Amazon, whose owner, Jeff Bezos, also owns The Washington Post, is currently the main target.”

“Now, according to four sources close to the White House, Trump is discussing ways to escalate his Twitter attacks on Amazon to further damage the company.”

Said one source: “He’s off the hook on this. It’s war. He gets obsessed with something, and now he’s obsessed with Bezos. Trump is like, how can I fuck with him?”

New York Times: “People close to the president have said critical articles in The Post often trigger his public musings about Amazon.”

THEY WERE FOR IT BEFORE THEY WERE AGAINST IT.  “President Trump and congressional Republican leaders, frustrated they had to work with Democrats to pass a fiscal 2018 omnibus spending measure, are mulling a way for their own party to effectively cut some of the funds they just approved,” Roll Call reports.

“The idea would be to deploy lesser-used provisions of the 1974 budget process law to roll back spending by impounding some of the appropriated funds.”

“Multiple rescissions can be grouped in a single message, and Congress has 45 legislative days to approve all, part or none of the president’s request. The budget law would provide a pathway for the Senate to consider a rescission resolution with only a simple majority support.”

The gun control movement catalyzed by the Parkland students has caught on among millennials. It could be enough to change this demographic's dismal voting habits.https://t.co/BMtBWa9kfW

PROTECTING TAXPAYERS FROM TRUMP’S TAX INCREASES.  New York Gov. Andrew M. Cuomo (D) “has pushed through a plan to shield his state residents from tax hikes under the Republican tax law — and Democratic-controlled statehouses across the country are following suit,” the Washington Post reports.

“The two provisions — one creating a new ‘charitable’ fund to replace local property taxes, and the second a largely technical change in how taxes are assessed — aim to help taxpayers avoid a new $10,000 cap on the amount of state and local taxes they can deduct from their federal taxes. The cap was imposed by congressional Republicans to raise money to offset their law’s steep cut to the corporate tax rate, but critics say it was designed to hurt residents of liberal states.”

This is short-sighted.  Some short term suffering means people will learn about the awful consequences of the bill.  Now, they will be protected from learning the truth.

A BETO HAUL.  Rep. Beto O’Rourke (D-TX) raised over $6.7 million for his U.S. Senate bid in the first quarter of 2018, “a staggering number that poses a new category of threat” to Sen. Ted Cruz (R-TX), the Texas Tribune reports.  “The haul is easily O’Rourke’s biggest fundraising quarter yet, more than double his next-closest total for a three-month period. It also is more than any Democratic Senate candidate nationwide took in last quarter, O’Rourke’s campaign said.”  And that’s without taking any PAC money.

Teachers in Oklahoma and Kentucky have gone on strike, asking for better pay in states where teacher compensation has essentially been falling. https://t.co/Lbtb2v8VaT

CRITICIZING SINCLAIR OR FOX MAKES TRUMP LOVE THEM MORE.  “The mainstream media’s skeptical-to-sneering coverage of Fox and Sinclair just endears those outlets to Trump, and causes his diehard supporters to dig in even deeper,” Axios reports.  How it works: “Trump demands instant gratification and the quickest way to do it is to kick a shared enemy of his media allies (WaPo being the one this week). He’ll get instant feedback, phone calls from cable hosts and approving coverage on their shows. It’s the modern version of call and response: his tweets, their chyrons.”

PRUITT WATCH. “White House chief of staff John Kelly has considered the firing of embattled Environmental Protection Agency chief Scott Pruitt in the coming months as part of a wave of ousters of top officials causing headaches for the president,” Politico reports.  “Pruitt is still hanging on for now, in part because Kelly wanted to wait for an upcoming EPA inspector general’s report into his expensive travels, the senior official said. Another possible reason: Pruitt is doing the job President Trump wants — including an announcement Monday that the agency will reverse the Obama administration’s attempt to tighten fuel efficiency standards for cars and trucks.”

Washington Post: “Aides to EPA Administrator Scott Pruitt last year considered leasing a private jet on a month-to-month basis to accommodate his travel needs, according to current and former agency officials. The officials, who spoke on the condition of anonymity to discuss internal deliberations, said the agency ultimately did not move forward with the plan because it would have been prohibitively expensive.”

The Atlantic reports that in “early March, Pruitt approached the White House with a request: He wanted substantial pay raises for two of his closest aides… Because both women were political appointees, he needed the White House to sign-off on their new pay.”  “The White House, the source said, declined to approve the raises.”

“So Pruitt found another way. A provision of the Safe Drinking Water Act allows the EPA administrator to hire up to 30 people into the agency, without White House or congressional approval. The provision, meant to help expedite the hiring of experts and allow for more flexible staffing, became law in 1996.”

The Daily Beast reports that the “lobbyist-owned townhouse that Pruitt rented for relatively small nightly sums also served as a hub for Republican lawmakers hoping to raise money for their congressional campaigns.”  “A review of fundraising invitations reveals that at least three members of Congress had fundraisers at the now-controversial Capital Hill brownstone during the same period of time that Pruitt was living there. Several of those fundraisers took place on dates when Pruitt was in Washington D.C.,  according to a cross reference of the invitations and Pruitt’s schedule.”

According to Bloomberg, President Trump called Pruitt last night and said “keep your head up, keep fighting, we’ve got your back.”   White House chief of staff John Kelly called this morning to reinforce the president’s message.  So I guess that means Pruitt will be fired this week.

Scott Pruitt's combination of personal corruption and appalling policy moves is the perfect embodiment of the Trump administration: https://t.co/vkHiuyJA98

TRUMP TRIES TO BURY STORMY INTO ARBITRATION.  “President Trump’s personal lawyer asked a federal judge on Monday to force adult film star Stormy Daniels to use arbitration to settle a dispute over an agreement to keep quiet about a sexual encounter she says she had with Trump,” Reuters reports.

MEXICO VEERS LEFT BECAUSE OF TRUMP. “Mexican left-wing presidential candidate Andres Manuel Lopez Obrador has an 18-point lead ahead of the July 1 election, according to a poll published on Monday that showed him with a growing advantage at the start of formal campaigning,” Reuters reports.

“A Lopez Obrador victory could usher in a Mexican government less accommodating toward the United States, where President Trump has stoked trade tensions with Mexico and aggressively moved to curb immigration.”

A TRUMP BEARHUG. Rep. Todd Rokita’s (R-IN) new ad in the Indiana U.S. Senate race discusses no policy issues and says basically nothing besides, “I will support Trump the most.”  Aaron Blake: “The ad is a remarkable little window into how at least one candidate thinks you win in today’s GOP, and Rokita hopes it’s his ticket to the Republican nomination to face Sen. Joe Donnelly (D-IN) next month.”

WHY SINCLAIR EMPLOYEES DON’T QUIT. “After Sinclair Broadcast Group Inc. drew widespread criticism for having anchors read a statement taking aim at the integrity of other U.S. media outlets, many wondered why some of the company’s journalists didn’t just quit,” Bloomberg reports.  “The short answer is the cost may be too steep.  According to copies of two employment contracts… some Sinclair employees were subject to a liquidated damages clause for leaving before the term of their agreement was up: one that requires they pay as much as 40% of their annual compensation to the company… They were also subject to a six-month noncompete clause and forced arbitration.”