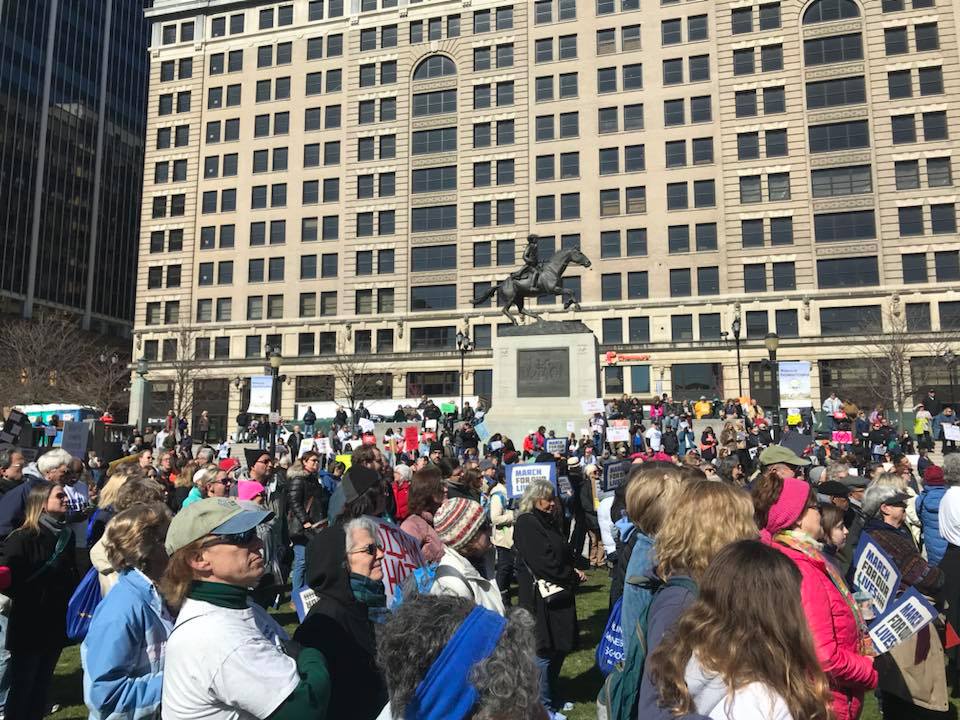 “Standing before vast crowds from Washington to Los Angeles to Parkland, Fla., the speakers — nearly all of them students, some still in elementary school — delivered an anguished and defiant message: They are ‘done hiding’ from gun violence, and will ‘stop at nothing’ to get politicians to finally prevent it,” the New York Times reports.

“The students, as they seized the nation’s attention on Saturday with raised fists and tear-streaked faces, vowed that their grief about school shootings and their frustration with adults’ inaction would power a new generation of political activism.”

A new Associated Press-NORC poll finds that 69% of Americans now favor stricter gun control measures. That’s up from 61% who said the same in October of 2016 and 55% when the AP first asked the question in October of 2013.

New York Times: “Inside the West Wing, aides described an atmosphere of bewildered resignation as they grappled with the all-too-familiar task of predicting and reacting in real time to Mr. Trump’s shifting moods.”

“Aides said there was no grand strategy to the president’s actions, and that he got up each morning this week not knowing what he would do. Much as he did as a New York businessman at Trump Tower, Mr. Trump watched television, reacted to what he saw on television and then reacted to the reaction.”

“Aides said he was still testing his limits as president while also feeling embattled by incoming fire — from Congress, the Russia investigation, foreign entanglements, a potential trade war and a pornographic film actress and a Playboy model who said they had affairs with Mr. Trump and were paid to keep quiet.”

President Trump “issued orders to ban transgender troops from serving in the military except in select cases — following through on a controversial pledge last year that has been under review by the Pentagon and fought out in the courts,” Politico reports.

Vanity Fair: “The big question of the alleged Stormy Daniels affair is why this norm-shattering president has declined to simply confess the alleged picayune extramarital affair and instead allowed Daniels to dine out on the story for weeks on end, culminating in a ratings-busting appearance on 60 Minutes?”

Said Aventatti: “My speculation has a lot to do with what he’s told his wife before, and likely denials he has provided to her concerning the relationship. And then secondly, I believe it’s part of his larger modus operandi, whereby he attempts to rule with an iron fist. And he tends to rule with an iron fist, even before he became president. And his Stalin–esque way of dealing with opponents.”

President Trump is questioning his advisers’ advice about remaining silent on the alleged affairs he had before taking office, the Wall Street Journal reports.

The affairs are now being widely reported on the news networks that the president watches frequently. He’s discussed the idea of fighting back against the allegations on Twitter.

Why the March for Our Lives could win https://t.co/oY1oNW6Jtn

“Those targeted for removal include officials believed to have been disloyal to President Trump, those who have leaked about the president to the media, his predecessor’s team, and those who came in under Obama.”

Holdovers from Obama’s administration are not Obama political appointees but instead career civil or foreign service employees who serve the President no matter if he is Clinton, Bush, Obama or Trump.

A former White House official tells Mike Allen that online conservative ire about the spending bill President Trump signed yesterday — after a puzzling tweeted veto feint — “is the hardest I’ve ever seen the base turn on Trump over anything.”

Said the official: “A big reason why people voted for him was because of his apparent willingness to stand up to the entrenched political class in both parties. Voters wanted a fighter who wouldn’t back down to ‘the swamp’ like a ‘typical politician. They were attracted to his strength and alpha mentality, but unfortunately yesterday’s fake veto threat did little but make him look weak … and his base took notice.”

Aerial footage shows the turnout at various March for Our Lives across the US today https://t.co/sPJ25LfDKd pic.twitter.com/E230ciayf0

“Now the Republicans who control Congress have passed a $1.3 trillion omnibus spending bill, and it not only protects Obama’s priorities, it expands them.”

“The omnibus—Capitol Hill jargon for a single spending bill that funds most government functions—does not kill any of the programs or agencies Trump’s budget proposed to kill… It basically extends the fiscal status quo that has prevailed since the start of Obama’s second term—plus a sizable chunk of new deficit spending—even though Republicans now control the legislative and executive branches.”

Here Are All The Best Signs From The March For Our Lives https://t.co/vKPox0QBhJ pic.twitter.com/QQHJGi2nG1

David Byler at the Weekly Standard: “For decades, Ohio has been a political bellwether—a quadrennial swing state that often voted for the winning presidential candidate. But in 2016, something odd happened—Ohio jerked sharply to the right, giving now President Trump an eight-point win despite his two-point national popular vote loss. Some Republicans hoped that Trump’s win was a sign of permanent shift that would allow them to unseat progressive Democratic Sen. Sherrod Brown in 2018.

But a new Baldwin Wallace poll is throwing some cold water on those hopes…Baldwin Wallace found that Brown leads two possible Republican challengers, Jim Renacci and Mike Gibbons, by 12 and 10 points respectively…According to the poll, 13 percent of Trump voters favor Brown. Some of those voters may be the much discussed Obama-voting white working class Democrats that Trump won over in 2016. Ohio is flush with those voters…More broadly, it might be worth thinking of these Obama-Trump voters not as reliable Republicans but as possible swing voters. They have, after all, swung from Obama to Trump recently and have reasons to vote for either party (cultural commonality with Republicans and economic agreement with Democrats).”

11-year old Naomi Wadler: "I am here to acknowledge and represent the African-American girls whose stories don't make the front page of every national newspaper, whose stories don't lead on the evening news." #MarchForOurLives (via CBS) pic.twitter.com/o6UkEuxemd

The Trump Administration’s failure to address the crisis in Puerto Rico with a serious relief plan could have some unintended consequences that backfire badly. As Manuel Madrid writes in The American Prospect,  “Clustered along Florida’s I-4 corridor, a political bellwether for the state, Puerto Ricans in central Florida are increasingly considered a counterweight to the state’s Republican-leaning Cuban American population, over half of whom voted for Donald Trump. In the wake of Hurricane Maria, a state-provided count claimed that the number of Puerto Ricans who had settled in Florida by December 2017 could be as high as 280,000—a figure that has since been questioned by experts. A newer estimate from University of Florida economists, using school enrollments and requests for state aid as a guide, put the total closer to just 50,000. But this number could grow. Recently, the Center for Puerto Rican Studies at the City University of New York released a study projecting that Puerto Rico could lose as many as 470,335 residents between 2017 and 2019. If recent trends serve as any guide, many if not most of those migrants will end up in Florida.”…“Very soon, the Puerto Rican vote will be in the driver’s seat in Florida,” says Garces of Mi Familia Vota, one of the Florida groups in discussion with the DNC. “But this work is year-round, it won’t be solved in one election cycle or just on even years.”

"Since this movement began, people have asked me, do you think any change is going to come from this?" says Cameron Kasky, a Stoneman Douglas student. "Look around. We are the change." https://t.co/jujbxM0M4i #MarchForOurLives pic.twitter.com/qfKWO2sUZl

Will Bunch: “At its blackened heart, it turns out, are the two ugliest words to emerge in U.S. politics in the 21st century: “Race realism.”

There’s nothing real, or factual, about “race realism.” To the contrary, it’s the rank, old-school racial stereotypes about black- and brown-skinned people that once animated slaveholders, the KKK or the White Citizens Councils of yesterday, dressed up in Adidas sneakers and a hip-hop T-shirt instead of a white robe. What we’ve learned these past few days is a kind of a dystopian nightmare: That Team Trump, led by its multimillion-dollar data gurus Cambridge Analytica (CA) and the president’s former propaganda minister, Steve Bannon (with a still mysterious assist from Russian trolls), used the modern techniques of information warfare — and hijacked data from Facebook — to inject a virulent strain of thinly disguised white supremacy to elect an American president.”