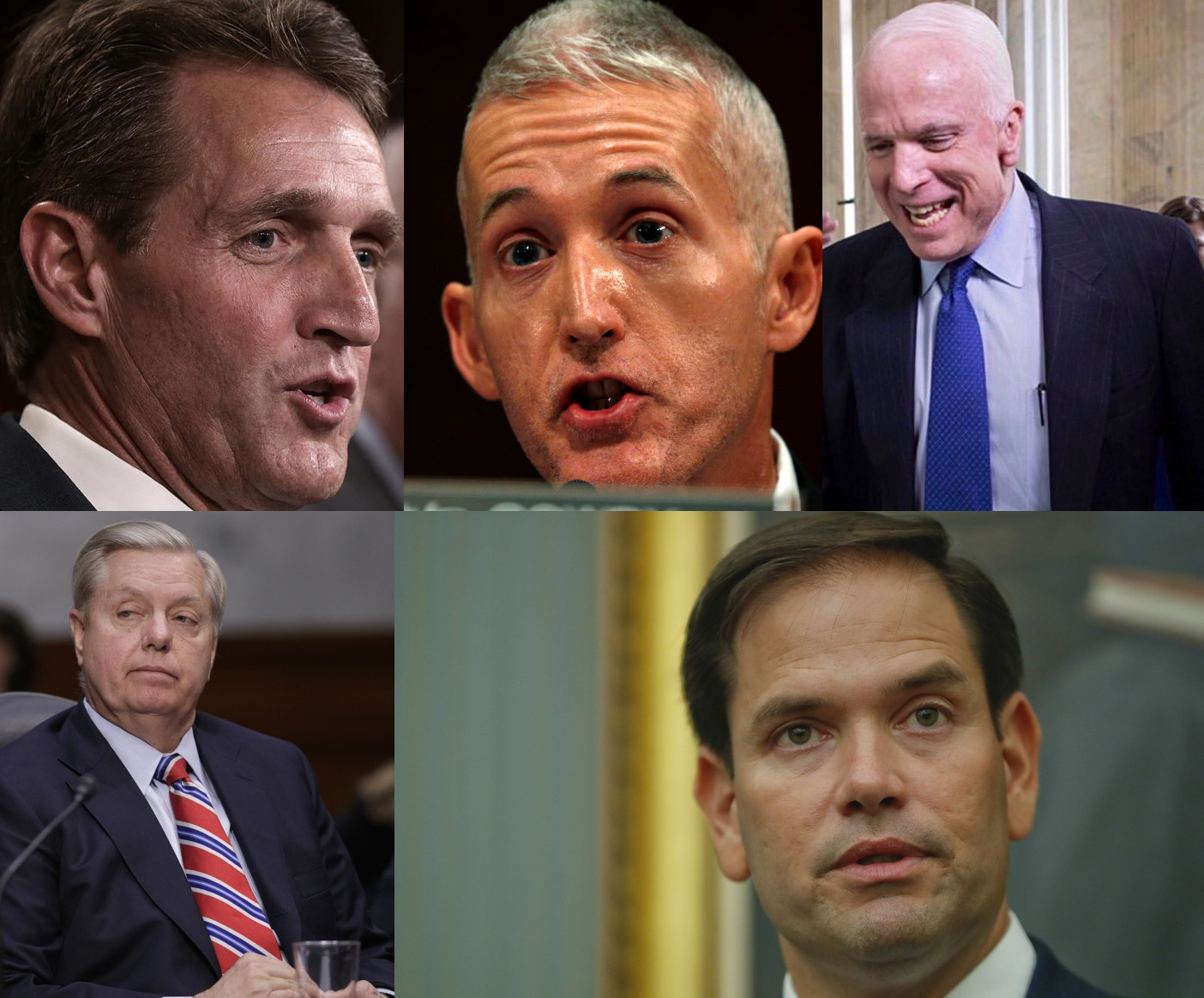 Sen. Lindsey Graham warned President Trump not to fire special counsel Robert Mueller, Reuters reports.  Said Graham: “The only reason Mr. Mueller could ever be dismissed is for cause. I see no cause when it comes to Mr. Mueller. I pledge to the American people as a Republican, to ensure that Mr. Mueller can continue to do his job without any interference.”  He added: “As I have said before, if he tried to do that, that would be the beginning of the end of his presidency, because we’re a rule of law nation.”

TRUMP’s firing of MUELLER "would be the beginning of the end of his presidency, because we are a rule-of-laws nation…& there are many Republicans that share my view,” LINDSEY GRAHAM tells @jaketapper. https://t.co/Uhd4BKBhbe

Talking Points Memo:   “Sen. Jeff Flake (R-AZ) told CNN’s Jake Tapper that, contrary to Trump’s earlier tweet, McCabe’s firing was a “horrible day of democracy” and that he expected to “see considerable pushback” from Congress in response to Trump’s “designs” on Robert Mueller.  “I don’t know what the designs are on Mueller, but it seems to be building toward that,” Flake said, after referencing “firings like this happening at the top from the President and the attorney general.”

“And I just hope it doesn’t go there, because it can’t,” he said. “We can’t, in Congress, accept that.”  […] “Talking to my colleagues all along, it was, ‘Once he goes after Mueller, then we’ll take action.’ I think that people see that as a massive red line that can’t be crossed.”  “I would just hope that enough people would prevail on the President now: Don’t go there,” Flake added.”

Attorney General Jeff Sessions’ testimony that he opposed a proposal for President Trump’s 2016 campaign team to meet with Russians has been contradicted by three people who told Reuters they have spoken about the matter to investigators with Special Counsel Robert Mueller or congressional committees.  So he just fired McCabe for allegedly lying, but now we caught Sessions in his third lie under oath.  Throw the Keebler Elf in jail.

A new NBC News/Wall Street Journal poll finds that 50% of registered voters say they prefer a Democratic-controlled Congress, while 40% want a GOP-controlled one.  “That double-digit lead — typically a sign of strong Democratic performance for the upcoming election — is up from the party’s 6-point edge in January’s NBC/WSJ poll, which was 49% to 43%, though the change is within the poll’s margin of error.”

Trump often directs surrogates to make bold claims to market-test his ideas. Dowd declined to tell WaPo if he consulted Trump before this morning’s statement calling for end to Russia probe https://t.co/vrDV4H6pFz

“For the second straight day, President Trump was unrestrained in his commentary about Robert Mueller’ expanding investigation, which is probing not only Russia’s interference in the 2016 presidential election and possible links to his campaign, but also whether the president has sought to obstruct justice,” the Washington Post reports.

Trump tweeted, “Why does the Mueller team have 13 hardened Democrats, some big Crooked Hillary supporters, and Zero Republicans? Another Dem recently added… does anyone think this is fair? And yet, there is NO COLLUSION!”

New York Times: “The attack on Mr. Mueller, a longtime Republican who was appointed F.B.I. director under a Republican president, George W. Bush, followed a statement by Mr. Trump’s personal lawyer published Saturday calling on the Justice Department to end the special counsel investigation. Together, the comments raised the question once again about whether the president might be seeking to lay the ground to try to fire Mr. Mueller.”

Rep. Trey Gowdy (R-SC) urged President Trump and his lawyer to stop flailing at special counsel Robert Mueller’s investigation and to let the probe continue unimpeded, Politico reports. Said Gowdy: “When you are innocent… act like it. If you’ve done nothing wrong, you should want the investigation to be as fulsome and thorough as possible.”

“When the Kushner Cos. bought three apartment buildings in a gentrifying neighborhood of Queens in 2015, most of the tenants were protected by special rules that prevent developers from pushing them out, raising rents and turning a tidy profit,” the AP reports.  “But that’s exactly what the company then run by Jared Kushner did, and with remarkable speed. Two years later, it sold all three buildings for $60 million, nearly 50 percent more than it paid.”

“We exploited Facebook to harvest millions of people’s profiles. And built models to exploit what we knew about them and target their inner demons. That was the basis that the entire company was built on.” https://t.co/W7FFoPt6Xy

“I hear so many Republican senators grumble about Trump’s ethics, about his name-calling. … At some point Republican enablers in the House and Senate are going to say publicly what they’ve been saying privately. And that’s when things change and we see a president back off this kind of name-calling, not telling the truth, sending out these tweets, all that.”  — Sen. Sherrod Brown (D-OH), on Meet the Press.

No way yet to evaluate the rush to fire Andrew McCabe, but each FBI official who corroborates Comey on the issue of potential obstruction has been targeted by Trump and his allies in Congress — McCabe is only the latest example. This is no coincidence. pic.twitter.com/EmktUPxWhT

Ryan C. Brooks: “Democratic strategists argue that there is a cost to the “churn-and-burn” fundraising strategy that outweighs the extra dollars it brings in. The cost of the spammy, fear-based communications, they say, is depressed and alienated voters and the public impression of the Democratic Party as just another arm of a cynical, dishonest establishment…“I think the DCCC’s email strategy is a wasted opportunity for Democrats. They have this expansive email list that they could be using to cultivate and motivate voters to flip congressional seats in 2018,” said Laura Olin, a Democratic digital strategist who’s worked with a host of progressives including Barack Obama’s digital team….“The thing is that fundraising campaigns from Obama, Warren, and Bernie showed us that we don’t need to use those scare tactics to raise money, and those tactics don’t make us lose our values by being inclusive, engaging, and honest rather than being alarmist and misleading,” said [Democratic digital strategist Matthew] McGregor.”

The FEC launched a preliminary investigation into whether Russian entities gave illegal contributions to the NRA that were intended to benefit the Trump’s 2016 campaign https://t.co/i7uwe0yrGD pic.twitter.com/6Pxrcz2Bmh

Jefferson Morley: In a large-scale study Sean McElwee, a co-founder of Data for Progress, Jesse H. Rhodes and Brian F. Schaffner of the University of Massachusetts, Amherst and Bernard L. Fraga of Indiana University  “studied the ballots of 64,000 voters in 2012 and 2016 and came away with a key finding: The number of voters who cast a ballot for Obama in 2012 and did not vote in 2016, or voted for a third-party candidate, outnumbered those Obama voters who pulled the lever for Trump…The Obama voters who stayed home, while generally liberal, were significantly less liberal on four of five key policy questions than the loyal Democratic voters who voted for both Obama and Clinton. In other words, more liberal policy positions were not sufficient to lure them to the polling booth…What made the difference for these non-voters was personal contact, or the lack thereof….“Only 43 percent of Obama-to-nonvoters reported being contacted by a candidate in 2016, compared with 66 percent of Obama-to-Clinton voters,” the authors say.”

Congressional Republicans and conservative pundits had the chance to signal Trump his attacks on law enforcement are unacceptable—and they failed the test, argues @DavidFrum https://t.co/giNo4uf6RF

Michael Tackett reports that White Evangelical Women, Core Supporters of Trump, Begin Tiptoeing Away” at The New York Times. “While the men in the pulpits of evangelical churches remain among Mr. Trump’s most stalwart supporters, some of the women in the pews may be having second thoughts. As the White House fights to silence a pornographic actress claiming an affair with Mr. Trump, and a jailed Belarusian escort claims evidence against the American president, Mr. Trump’s hold on white evangelical women may be slipping…According to data from the Pew Research Center, support among white evangelical women in recent surveys has dropped about 13 percentage points, to 60 percent, compared with about a year ago. That is even greater than the eight-point drop among all women…“That change is statistically significant,” said Gregory A. Smith, Pew’s associate director of research, who also noted a nine-point drop among evangelical men. “Both groups have become less approving over time.”

New York Times: “In the past year, Mr. Pruitt has emerged as a hero to President Trump’s supporters for his hand in rolling back environmental rules at an agency long disliked by farmers, the fossil fuel industry and the far right. And he has occasionally shocked his employees by criticizing the very agency he heads.”

“Now, people close to Mr. Pruitt say he is using his perch as Mr. Trump’s deregulatory czar to position himself for further political prominence — starting with a run for office in his home state of Oklahoma. He is widely viewed as a future candidate for senator or governor there, and Mr. Pruitt has made it known that if the president replaces his beleaguered attorney general, Jeff Sessions, he would be ready to step into the job.”

“Behind the scenes, Mr. Pruitt has spent time with major political donors. Last year he met with Foster Friess, a Republican fund-raiser, and with investors connected to Sheldon Adelson, the party megadonor, according to meeting records obtained by The New York Times. He also met with Steven Chancellor, an Indiana coal executive and Republican fund-raiser.”

Ruth Marcus: “In the early months of the administration, at the behest of now-President Trump, who was furious over leaks from within the White House, senior White House staff members were asked to, and did, sign nondisclosure agreements vowing not to reveal confidential information and exposing them to damages for any violation. Some balked at first but, pressed by then-Chief of Staff Reince Priebus and the White House Counsel’s Office, ultimately complied, concluding that the agreements would likely not be enforceable in any event.”

”Moreover, said the source, this confidentiality pledge would extend not only after an aide’s White House service but also beyond the Trump presidency.“