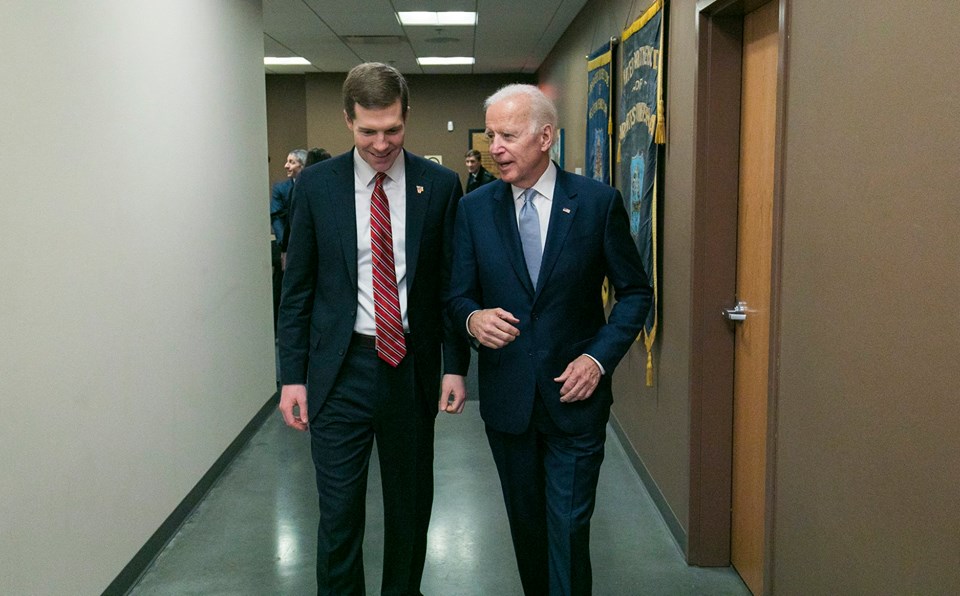 Democrat Conor Lamb has defeated Republican Rick Saccone in the special election in the 18th Congressional District in Western Pennsylvania by some 600 votes, with all of the absentee ballots counted. MSNBC has declared him the apparent winner, because while there are some dozens to a couple hundred military ballots an provisional ballots left to count, even if Saccone wins all of them, he will not make up his deficit.      But either way, a close 50/50 result in this district that voted for Trump by 20% is monstrously bad news for Republicans nationwide.  There are 114 Republican held seats in the House right now that are less Republican leaning than PA18 was before tonight.

Mike Allen: “Regardless of the ultimate winner, it was a humiliating and sobering night for the GOP. This a district President Trump won by 20 points. The Democratic energy and Republican depression signal a brutal midterm season and the increasingly likely return of Speaker Pelosi.”

Rick Klein: “As Republicans pick up the pieces – and ponder the prospect of spending more money on Pennsylvania’s 18th Congressional District if Rick Saccone wants a recount – they will know well that there are easily 100 House districts that are likely to be more competitive than Pennsylvania’s special election had any right to be.”

“President Trump has ousted Secretary of State Rex Tillerson and replaced him with CIA Director Mike Pompeo, orchestrating a major change to his national security team amid delicate negotiations with North Korea,” the Washington Post reports.  “Pompeo will replace him at the State Department, and Gina Hapsel — the deputy director at the CIA — will succeed him at the CIA, becoming the first woman to run the spy agency, if confirmed.”

New York Times: “Mr. Tillerson has been out of favor with Mr. Trump for months but had resisted being pushed out and vowed to remain on the job. But his distance from Mr. Trump’s inner circle was clear last week when the president accepted an invitation to meet with Mr. Kim, to the surprise of Mr. Tillerson, who was traveling in Africa at the time.”

His sudden firing this morning seemed awfully suspicious because of the above story.   So the White House tried to lie about the timing of the firing, saying that Tillerson was informed on Friday.  But the State Department said that Rex Tillerson only learned of his termination when he read President Trump’s tweet on Tuesday morning, the AP reports.  “Two senior department officials said Tillerson received a call from John Kelly, Trump’s chief of staff, on Friday, but was only told that there might be a presidential tweet that would concern him. Kelly didn’t tell Tillerson what the tweet might say or when it might actually publish.”  Washington Post: “In the end, no one was more surprised that Tillerson was fired than Tillerson himself.”

The State Department spokesman making these statements about when Tillerson was actually informed, Under Secretary of State for Public Diplomacy and Public Affairs Steve Goldstein, was immediately fired for telling the truth.  Seriously.

“But if the West can’t muster a serious response to the use of chemical weapons on British soil to target someone Russian officials apparently viewed as a traitor for his work with British intelligence, what else will Putin try?” https://t.co/Zm30U79IPU

The Tillerson firing may trigger the resignations of Defense Secretary James Mattis and Treasury Secretary Steven Mnuchin, because BuzzFeed reported last year that all 3 cabinet secretaries had a “suicide pact” that if one of them was fired they would all leave.   This alleged suicide pact was cited as why Tillerson did not leave his post after Trump gave a controversial speech to the Boy Scouts last  year. It was referenced again as a reason Tillerson didn’t quit after he had openly disparaged Trump, referring to him as a “moron.”  We may now find out that the pact was bullshit or that Mnuchin and Mattis are not men of their word if their resignations are not pending.

Yes, the president’s statements at a campaign rally may be newsworthy. They should be reported on, fact-checked and put in context — not aired in their self-serving entirety as though he were a dictator with control over the state airwaves. https://t.co/LDyd3B8wRF by @Sulliview

“The strategy shift has been dramatic. For the weeks of Feb. 4 and Feb. 11, roughly two-thirds of the broadcast television ads from Saccone’s campaign, the super PAC Congressional Leadership Fund and the NRCC mentioned taxes, according to a Politico analysis of data from Advertising Analytics. For the week of Feb. 18, that dropped to 36 percent, and to 14 percent the week after.”

“Since the beginning of March, tax ads have been essentially non-existent. Only two are on the air now — one from the pro-Trump super PAC America First Action which briefly mentions the tax law, and a radio ad from a progressive group attacking Saccone for supporting the law.”

Meanwhile, “publicly, the Democratic Congressional Campaign Committee did little to help Conor Lamb (D). Behind the scenes was a different story,” McClatchy reports.

“The Democratic nominee in Pennsylvania’s special House election — whom polls suggest is poised to pull off a shock upset in Tuesday’s race over Rick Saccone (R) — benefited from a quiet but determined DCCC effort to boost his candidacy.”

Today we learned that Roger Stone knew in advance about the email hacks, which means Trump himself almost certainly knew, too. https://t.co/ZZYpWEAWbi pic.twitter.com/0LtdVXjlfW

“In the spring of 2016, longtime political operative Roger Stone had a phone conversation that would later seem prophetic, according to the person on the other end of the line,” the Washington Post reports.

“Stone, an informal adviser to then-candidate Donald Trump, said he had learned from WikiLeaks founder Julian Assange that his organization had obtained emails that would torment senior Democrats such as John Podesta, then campaign chairman for Democratic presidential candidate Hillary Clinton.”

“The conversation occurred before it was publicly known that hackers had obtained the emails of Podesta and of the Democratic National Committee, documents which WikiLeaks released in late July and October. The U.S. intelligence community later concluded the hackers were working for Russia.”

President Trump’s longtime personal aide John McEntee was fired because he is currently under investigation by the Department of Homeland Security for serious financial crimes, CNN reports.  Indeed, he was escorted out of the White House on Monday, according to the Wall Street Journal, “without being allowed to collect his belongings… He left without his jacket.”

But here’s the kicker: “Minutes after news of his departure broke, the Trump campaign announced McEntee would be joining the reelection effort as a senior adviser for campaign operations.”

President Trump “has been seeking counsel from confidantes on how he should handle the Stormy Daniels situation,” CNN reports.  “The source said Trump is being told by advisers not to fight Daniels’ decision to break a confidentiality agreement because it would make him look guilty. This source said it’s the only reason Trump has stayed quiet on the issue and hasn’t been tweeting about it.”

“The source also believes the controversy potentially poses a bigger threat to Trump’s presidency than Russia. The difference here compared to accusations from other women is that there’s a signed agreement and a payment.”

.@SenDuckworth with a stinging criticism of Gina Haspel's nomination as CIA director: "Her reprehensible actions should disqualify her from having the privilege of serving the American people in government ever again." https://t.co/Vm3PZnULzL

A great new book, Russian Roulette, reports that George Papadopoulos spent months “trying to set up a back channel between the campaign and the Kremlin, in part to arrange a Trump-Putin meeting before Election Day,” according to Mother Jones.

“According to a later court filing, Papadopoulos, who in October 2017 pleaded guilty to lying to the FBI, aimed to set up an ‘off the record’ meeting between campaign representatives and Putin’s office. Trump has famously denied there was any relationship between his campaign and Moscow. But Russian Roulette reveals that Papadopoulos has told investigators that at a March 31, 2016, meeting Trump held with his foreign policy team, when Papadopoulos informed Trump he had contacts in the United Kingdom who could set up a meeting between Trump and Putin, Trump said this was an ‘interesting’ idea. Trump, according to Papadopoulos’ account, looked at then-Sen. Jeff Sessions (R-AL), a top Trump adviser at the time, as if he expected him to follow up. Afterward, Papadopoulos, working with Russian cutouts, kept pursuing such a meeting.”

Rex Tillerson might have been the worst secretary of State in American history – and his firing might be the worst development of the Trump presidency thus far.https://t.co/HZAm93nVm4

Three sources confirmed to CNN that Stormy Daniels made new claims about Donald Trump in an interview she taped with 60 Minutes. CBS producers are working on verifying these claims. “The interview could air on next Sunday’s 60 Minutes. But CBS won’t confirm the air date. In fact, the network won’t even confirm there was an interview at all.”

"Secrets worth paying north of a hundred grand to keep are secrets that could be powerful tools in the hands of foreign governments or domestic special interests…Who has leverage over the president, and what are they using it for?" https://t.co/EsrmBHnD1u

A new CBS News poll finds President Trump’s overall job approval rating remains virtually unchanged, 38% to 57%.  “As has been the case since the start of his term, a large majority of Republicans continue to approve of the job he’s doing, while most Democrats disapprove.”

“Mr. Trump did not make a formal offer to Mr. Perry when the two men met on Monday. But the people said the president has grown impatient with the department’s current secretary, David Shulkin, and may want to replace him with someone already in his cabinet.”

CNN: “Trump and his senior aides are frustrated with Shulkin because they believe he has undermined the White House on several occasions and is unwilling to work with other members of his agency who were appointed by the Trump administration.”

“Almost 14 months into Donald Trump’s turbulent White House tenure, loyalists are in, dissenters are out and the president himself is acting on his own instincts more swiftly than ever to make decisions on policies from trade to North Korea,” Reuters reports.

“People close to Trump said his firing on Tuesday of Secretary of State Rex Tillerson was the latest sign of the Republican president’s growing impatience with his initial set of hand-picked advisers who he viewed as slow-walking his favored policies.”

“Trump will still encourage disagreement within his inner circle, these people said, but once he makes a decision, he wants it carried out swiftly.”

A new University of Chicago survey of 43 top economists found not a single one said President Trump’s new tariffs on steel and aluminum will end up being a net positive for Americans.

Overall, 65% of respondents said they “strongly disagreed” when asked if Trump’s move “imposing new US tariffs on steel and aluminum will improve Americans’ welfare,” while 28% simply disagreed. Three economists, or the remaining 7%, did not respond to the survey.