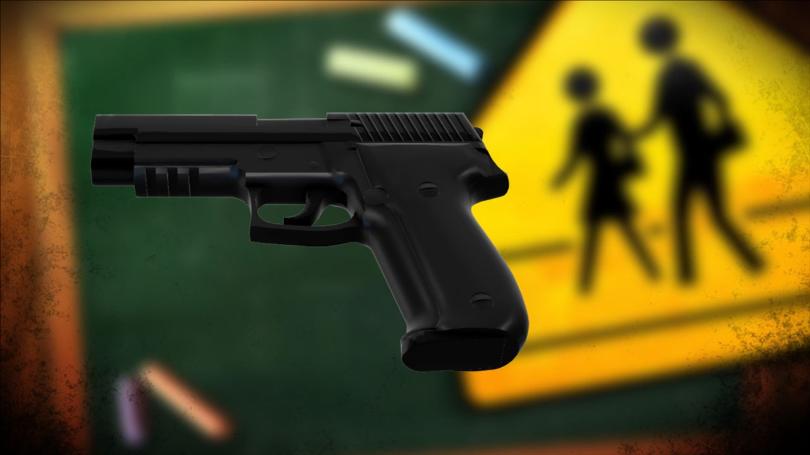 Some days it feels like we’re psychic, because who didn’t see this coming?

A teacher who is also a reserve police officer trained in firearm use accidentally discharged a gun Tuesday at Seaside High School in Monterey County, Calif., during a class devoted to public safety. A male student was reported to have sustained non-life-threatening injuries.

The weapon, which was not described, was pointed at the ceiling, according to a statement from the school, and debris fell from the ceiling.

Seaside Police Chief Abdul Pridgen told the Monterey County Weekly that a male student was “struck in the neck by ‘debris or fragmentation’ from something overhead.’” Pridgen said whatever hit the student was not a bullet.

However, the student’s father, Fermin Gonzales, told KSBW 8 that it was his understanding that fragments from the bullet ricocheted off the ceiling and lodged in the boy’s neck. The father said the teacher told the class before pointing the gun at the ceiling that he was doing so to make sure his gun wasn’t loaded, something that can be determined visually.

“It’s the craziest thing,” Gonzales told the station. “It could have been very bad.”

Gonzales said he learned about the incident when his 17-year-old son came home with blood on his shirt and bullet fragments in his neck.

“He’s shaken up, but he’s going to be OK. I’m just pretty upset that no one told us anything and we had to call the police ourselves to report it,” the father told the TV station.

Wait… Not only didn’t the school/teacher contact the boy’s father, but no one at the school called the police? A gun was fired inside a school, inside a classroom and everybody in charge shrugged and sent an injured boy on his way without a telling a soul? I can’t wrap my head around this. A teacher brings a gun to school, brings it out in class, “accidentally” discharges it, a student is injured, nobody seeks medical attention for the child, nobody calls the police, and they send the boy home not knowing if his injuries could be serious. If that were my kid, I’d already be lawyered up.

I can’t think of a single reason this teacher had a gun out in his classroom, other than the obvious – far too many gun owners love showing off their guns.

Several years ago, my son visited a friend in Atlanta. They went to have dinner at her friend’s house. That guy kept talking about his gun, and then offered to show it to the group. My son said, “No”, that it would make him uncomfortable and that he would leave if the guy brought out his gun. The guy didn’t bring out the gun, but spent the rest of the evening questioning my son’s masculinity. Typical.

The teacher who shot the gun (Oops?) has been placed on administrative leave. He should be fired. There is simply no reason for what he did – altho, here’s what’s being said:

Exactly why the teacher was displaying the weapon at all was not entirely clear. Police said he was “providing instruction related to public safety.”

The father told KSBW that the teacher was preparing to use the gun to show how to disarm someone.

Providing instruction related to public safety? Is that a real statement? How’d that work out? Personally, I think this teacher felt emboldened by the NRA’s and Trump’s plan of arming teachers and decided to show off his mad skillz.

Arming teachers is the dumbest idea on the face of the earth. The ease in which it’s tossed around as a solution astounds me. The people tossing it around haven’t given it much thought, but Stonekettle on Twitter has a thread that everyone should read. For those of you not on Twitter, I’ve posted the thread below.

Who designs the training. On what criteria? To what standards? No, don’t just say, “the local police department” or something similar. /1

This training would have to specially designed because you’re talking about non-professionals with guns in a building full of panicked children AND those “specially trained people” will be very likely facing a CHILD with a gun who is killing other children. 2/

We don’t train soldiers for that. We don’t train cops for that. So we’re going to need special training, including not just the mechanics and theory of combat arms, but the psychology of killing a CHILD in an active shooter situation. 3/

If you don’t understand why this is a problem, then you’re very likely unqualified to be in this conversation in the first place. It takes years of training to condition a soldier to kill another human being on command, let alone a child. 4/

When that killing occurs, it’s usually in a warzone, alongside your squadmates, and while that engagement is very, very often chaotic, it can’t be compared to the confusion and chaos of a building packed with screaming running children that you are supposed to be protecting. 5/

In a warzone, if your bullets hit a civilian, even a child, well, that’s collateral damage. It happens. It can’t NOT happen. That’s war. And soldiers come apart from this. That’s one of the many reasons VA waiting rooms are packed full of PTSD cases. 6/

A school? Full of American kids? You starting to see why you’d need some VERY, VERY specific training? Have you given any thought to the psychology of this situation? Like at all? The psychology of training to kill children? 7/

Cops develop a distant relationship with the public, us and them, sheep and wolves, because they may have to kill that public. Because they always have to be on alert that the public might try to kill them. 8/

Who pays for it? Combat arms is a perishable skill, so how often is refresher training and re-qualification mandated? Again, who does that training? Who does the background checks? Who does the psychological screening? Who decides who can and cannot carry in a school? 10/

If a teacher wants to be armed, but is judged by (?) to be unfit (for whatever reason), what are legal repercussions? Can the teacher sue to change the judgement? Who is the final arbiter? Who pays for the legal challenge? 11/

Who do these “specially trained people” answer to in a tactical situation? Is the principle also the commanding general? Or is the school police officer now part of the chain of command? Who do you answer to in this situation? What’s THEIR training? 12/

What’s the doctrine for armed teachers in an active shooter situation? Remain in their classrooms? Take to the hall to conduct sweep and clearing operations? Are they trained to work together? Or are they Lone Wolf McQuade? You have to have a plan BEFORE the shooting starts 13/

Is the armed teacher responsible for failure to stop an active shooter? The teacher was “highly trained” but failed to stop the shooter, when the grieving parents sue, will the school hang the teacher out to dry? SOMEBODY has to be legally responsible. 15/

What weapons? It makes a difference, you know. Larger, high velocity rounds can penetrate body armor, but also walls, doors, etc, meaning increased chance of collateral damage in a building full of children. 16/

We made the cockpit doors on aircraft bulletproof, are we going to do that with classrooms? If not, why not? And we’re back to the question of who’s responsible when the school gets sued for not protecting the students from stray bullets fired by their own teachers. 17/

So, do you mandate acceptable weapons? Ammunition? Fields of Fire? Zones of responsibility. Or is it the Wild West? And we’re back to the question of tactics and the adaption military urban warfare doctrine. Who does this? Who creates this? Who’s responsible for this? 18/

This hole is bottomless. You are essentially talking about turning teachers into soldiers and schools into warzones. You would do everything, EXCEPT address the actual problem. 20/

Instead, I simply asked some VERY basic questions regarding allowing or even mandating armed teachers and school personnel. Questions anyone who has had even basic weapons training should be asking. 22/

If you want to put more guns, carried by amateurs, into a building packed full of children, then I don’t think I’m being unreasonable here. When the president says “highly trained expert teachers,” we must all demand to know EXACTLY what that means. In detail. 23/23

If you support arming teachers then answer these questions.

3 comments on “Teacher, Trained In Gun Use, Accidentally Shoots Gun In Classroom”