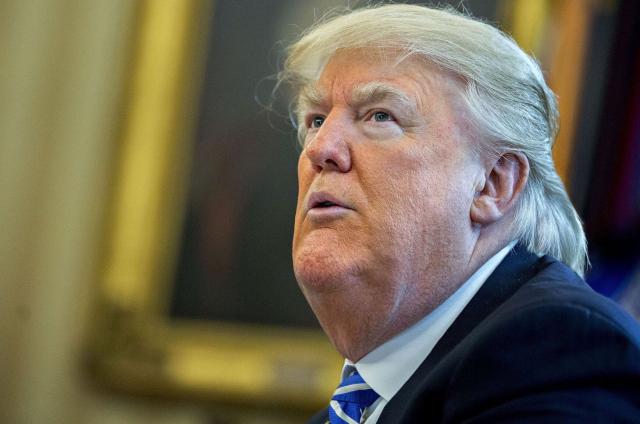 President Trump’s lawyers “are seeking to negotiate a deal with special counsel Robert Mueller that uses an interview with the president as leverage to spur a conclusion to the Russia investigation, according to a person familiar with the discussions,” the Wall Street Journal reports.

“The president’s legal team is considering telling Mr. Mueller that Mr. Trump would agree to a sit-down interview based on multiple considerations, including that the special counsel commit to a date for concluding at least the Trump-related portion of the investigation. One idea is to suggest a deadline of 60 days from the date of the interview, the person said.   Another consideration for the legal team is reaching an agreement with Mr. Mueller on the scope of his questioning of the president, which they expect to focus largely on his decision to fire former national security adviser Mike Flynn and former FBI director James Comey, according to people familiar with the matter.”

I can hear Mueller laughing from here.

“President Trump’s personal attorney used his Trump Organization email while arranging to transfer money into an account at a Manhattan bank before he wired $130,000 to adult film star Stormy Daniels to buy her silence,” NBC News reports.  “The lawyer, Michael Cohen, also regularly used the same email account during 2016 negotiations with the actress — whose legal name is Stephanie Clifford — before she signed a nondisclosure agreement.”

The White House on Friday appeared to set tougher conditions for a meeting between President Trump and the North Korean leader, Kim Jong Un, saying that the North must take ‘concrete steps’ toward denuclearizing,” Politico reports. “The White House also seemed to back away from the two-month timeframe laid out by South Korean officials on Thursday evening during a highly unusual press announcement in the White House driveway.”

Victor Cha: “Finally, everyone should be aware that this dramatic act of diplomacy by these two unusual leaders, who love flair and drama, may also take us closer to war. Failed negotiations at the summit level leave all parties with no other recourse for diplomacy. In which case, as Mr. Trump has said, we really will have ‘run out of road’ on North Korea.”

Playbook: “This isn’t like guns or health care or immigration, where Trump can say one thing, believe another and let the issue fade to the background. This is a rogue nuclear state. The entire planet will be watching these talks. The stakes couldn’t be higher.”

First Read: “The North Korea talks mean that Trump has to keep National Security Adviser HR McMaster, right? MSNBC reported that the White House has been preparing to replace McMaster as early as in April. Well, it would be VERY hard to do that now. Also, there is no ambassador to South Korea or any real North Korean experts working inside the White House. Who on Trump’s team has experience in knowing how to deal with North Korea and Kim Jong Un?”

So now the White House is trying to walk back Trump’s impetuous acceptance of Kim Jong-un’s summit invitation. That only confirms what I wrote last night—Trump was snookered. Appalling that we have a president who is so credulous and ignorant. https://t.co/Xoh966C0i7

Veterans Affairs Secretary David Shulkin “is managing the government’s second-largest bureaucracy from a fortified bunker atop the agency’s Washington headquarters,” the Washington Post reports.   “He has canceled the morning meetings once attended by several of President Trump’s political appointees — members of his senior management team — gathering instead with aides he trusts not to miscast his remarks. Access to Shulkin’s 10th-floor executive suite was recently revoked for several people he has accused of lobbying the White House to oust him. He and his public-affairs chief have not spoken in weeks. And in a sign of how deeply the secretary’s trust in his senior staff has eroded, an armed guard now stands outside his office.”

The reality is already pretty clear, though it’ll take a few days for people to admit it. The President accepted a non invitation to a summit with Kim Jong un on an clueless impulse. White House now trying to make it unhappen.

Nate Cohn: “After Donald J. Trump’s upset victory in the 2016 presidential election, one data point from the network exit polls jumped out at analysts: his two-point win among college-educated white voters. Many pre-election polls had suggested they would favor Hillary Clinton. And now, more than a year later, polls again show Mr. Trump with striking weakness among well-educated white voters, implying he has alienated many who backed him in 2016. But it is increasingly clear that there’s another explanation: The exit polls were wrong.”

NEW: According to five Republicans close to the White House, Trump is preparing to replace his senior staff in the coming weeks. First to go will be Kelly and McMaster. Then Jivanka. https://t.co/WJ932RzoWC

Vanity Fair: “According to five Republicans close to the White House, Trump has diagnosed the problem as having the wrong team around him and is looking to replace his senior staff in the coming weeks.”   Said one: “Trump is going for a clean reset, but he needs to do it in a way that’s systemic so it doesn’t look like it’s chaos,.”

“Sources said that the first officials to go will be Chief of Staff John Kelly and National Security Adviser H.R. McMaster, both of whom Trump has clashed with for months. On Tuesday, Trump met with John Bolton in the Oval Office. When he plans to visit Mar-a-Lago next weekend, Trump is expected to interview more candidates for both positions, according to two sources… Cohn had been lobbying to replace Kelly as chief, two sources said, and quit when he didn’t get the job.”

“Next on the departure list are Jared Kushner and Ivanka Trump. Trump remains fiercely loyal to his family, but various distractions have eroded their efficacy within the administration. Both have been sidelined without top-secret security clearances by Kelly, and sources expect them to be leaving at some point in the near future.”

Politico: “Between stops on his book tour and in the ramp-up for what will be a heavy midterms campaign schedule, a tight circle of aides has been brainstorming a range of tear-up-the-playbook ideas for a White House run.”

“On the list: announcing his candidacy either really early or really late in the primary process so that he’d define the field around him or let it define itself before scrambling the field; skipping Iowa and New Hampshire and going straight to South Carolina, where he has always had a strong base of support; announcing a running mate right out of the gate and possibly picking one from outside of politics; and making a pitch that he can be a bridge not just to disaffected Democrats, but to Republicans revolting against President Trump.”

“They’ve also discussed an idea some donors and supporters have been pitching Biden on directly for months: kick off by announcing that he’d only run for one term… The former vice president would pick a younger Democratic running mate and argue that he’d be the elder statesman to get the country and government back in order post-Trump and be the bridge to the next generation.”

Pacific Standard: “The factors that drove support Donald Trump in the United States and Brexit in the United Kingdom have been well-parsed by this point: racial resentment, the fear of demographic change, economic hardship, the pain of feeling left behind in a globalized economy.”

“But new research reveals another element that contributed to those anti-establishment votes: neuroticism.”  The finding is “consistent with the idea that populist campaigns played on the fears of the voters,” the researchers write. After all, they note, “campaigns that draw on fear should be particularly compelling to people already prone to being anxious.”

Who knows, Trump's meeting with Kim Jong Un might be a good thing – unless he screws it up. https://t.co/azHu5ydYIr

Ron Brownstein: “The most immediate effect of the recent steps taken by Donald Trump and congressional Republicans to unravel the Affordable Care Act will be to create an even deeper gulf between red and blue states in the availability and quality of health insurance. An array of blue states are exploring ways not only to blunt Trump’s moves, but also to reach beyond the ACA with new mechanisms to expand coverage. Simultaneously, many red states are leaning into the rollback—both by seeking to limit access to Medicaid, and by embracing Trump’s efforts to deregulate insurance markets in ways that will restore the pre-ACA separation between the healthy and sick…”

“That means health insurers are likely to announce major premium increases during the next ACA open-enrollment period—just weeks before the midterms. In a January national Kaiser poll, three-fifths of Americans said they would blame Trump and the GOP for any further ACA problems. By creating the conditions for big premium hikes this fall, Republicans in Washington and the states appear determined to test that proposition.”

Gary Cohn wouldn't resign over Trump's equivocation after the anti-Semitism in Charlottesville. So he resigned over tariffs + said Trump said something anti-Semitic to send him off https://t.co/niXu0YW2YH

“Former Trump campaign manager Corey Lewandowski is scheduled to be interviewed by the House Intelligence Committee on Thursday, and he could be one of the last major witnesses to appear as part of the panel’s Russia investigation,” CNN reports.   “Rep. Mike Conaway and other Intelligence Committee Republicans are signaling they’re ready to end the investigative phase of their Russia probe and move on to writing the final report, while Democrats say there are still scores of witnesses the committee needs to speak with.”

Democrats Counter Trump’s Non-Infrastructure Plan With a Real One https://t.co/AyulywJFAc

“Donald Trump was so eager to have Vladi­mir Putin attend the 2013 Miss Universe pageant in Moscow that he wrote a personal letter to the Russian president inviting him to the event,” the Washington Post reports.  “At the bottom of the typed letter, Trump scrawled a postscript adding that he looked forward to seeing ‘beautiful’ women during his trip.”

“The letter, the first known attempt at direct outreach by Trump to Putin, has been turned over to investigators probing Russia’s interference in the 2016 campaign. It is unclear whether Trump’s missive was ever delivered to the Russian president — and if so, whether Putin responded.”

The Pee Tape is real.

The Trump administration steps in to stop Idaho’s anti-Obamacare plan. But the state might have an alternative route to the same goal. https://t.co/1avLjAakNP

Talking Points Memo: Democrat Conor Lamb leads Republican Rick Saccone by 48 percent to 44 percent in a survey conducted by RABA Research, a bipartisan firm. That would mark a huge upset in a conservative district that stretches from Pittsburgh to the West Virginia border that President Trump won by 20 points in 2016. It would give Democrats their first House special election victory of the Trump era on Tuesday night.