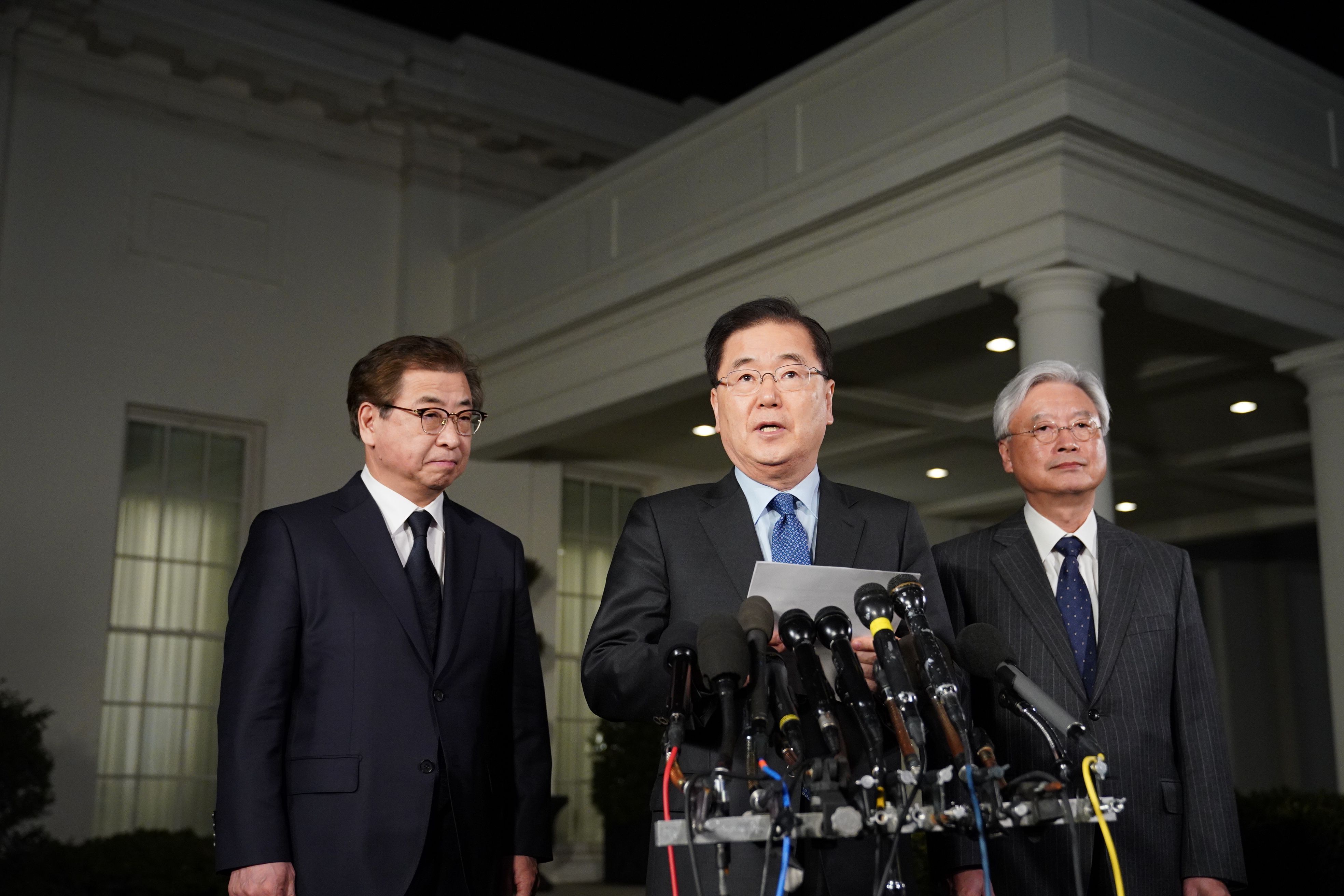 South Korean officials announced outside of the White House last night that President Trump has accepted a North Korean invitation to meet Kim Jong Un at some as of yet undisclosed location by May.

South Korea’s national security adviser Chung Eui-yong: “I told President Trump that in our meeting, North Korean leader Kim Jong Un said he’s committed to denuclearization,” Chung said. “Kim pledged that North Korea will refrain from any further nuclear or missile tests.”  Chung continued: “He understands that the routine joint military exercises between the Republic of Korea and the United States must continue. And he expressed his eagerness to meet President Trump as soon as possible.”

“President Trump appreciated the briefing and said he would meet Kim Jong Un by May to achieve permanent denuclearization.”

Diplomacy is always good.  But I am highly skeptical that we will have a peace deal in May where North Korea will agree to give up all its nuclear weapons in exchange for just a meeting with Trump.   Yeah, the devil is in the details here.   Indeed, it is highly likely that the North Koreans will take high offense to something Trump will say and declare immediate war.  Remember, North Koreans cancel summit meetings when they do not like the placement of flags on the meeting table.   Donald Trump wants credit for this.  Okay, Donny, you get the credit.  Don’t f*ck it up.

Trump has committed to an unprecedented diplomatic gamble with very few diplomats to support him. From the @washingtonpost's two great new hires @paulsonne and @john_hudson. https://t.co/KHDbwT9J65

“President Trump signed a pair of proclamations Thursday that impose tariffs on imported steel and aluminum but offer relief to some U.S. allies,” the Washington Post reports.  “The tariffs, which take effect in 15 days, initially will not apply to imports from Canada and Mexico so that U.S. officials can assess progress toward a new North American Free Trade deal.”

“Other countries with a ‘security relationship’ to the United States may seek exemptions by opening talks with the administration on ‘alternative ways’ to address the threats the administration alleges their products pose to national security.”

A new Brookings report on the potential effects steel and aluminum tariffs may have on state economies finds that imports are going to the largest economies across the country.  The authors looked at the share aluminum and steel make up of total imports into a state and found that President Trump won the most of the states in 2016 where the economies are most reliant on the imports he’s looking to tax.  In other words, making foreign steel and aluminum more expensive could hurt the states that helped Trump win the presidency.

The 10 states with the greatest exposure to steel and aluminum tariffs are Missouri, Louisiana, Connecticut, Maryland, Arkansas, Iowa, West Virginia, Alabama, Ohio, and North Dakota. Trump beat Hillary Clinton in eight of them in 2016.

Special counsel Robert Mueller “has gathered evidence that a secret meeting in the Seychelles just before the inauguration of Donald Trump was an effort to establish a back-channel between the incoming administration and the Kremlin — apparently contradicting statements made to lawmakers by one of its participants,” the Washington Post reports.

“In January, 2017, Erik Prince, the founder of the private military company Blackwater, met with a Russian official close to President Vladimir Putin, and later described the meeting to congressional investigators as a chance encounter that was not a planned discussion of U.S.-Russia relations.”

“A witness cooperating with Mueller has told investigators the meeting was set up in advance so that a representative of the Trump transition could meet with an emissary from Moscow to discuss future relations between the two countries.”

Horrifying scene in National City (near San Diego) where Border Patrol agents stop a family in the middle of the street, forcibly take the mother of these girls, shove her into a patrol vehicle, then drive away. (1 of 2 videos)… pic.twitter.com/iDvFlFFGun

"If this was put out by a terrorist organization, we would be raising the terror threat level in this country. Why are we letting this lobby have anything to do with DC? I don't understand it!" https://t.co/voYy9BhnvV pic.twitter.com/6fXW7qxVJx

CNN: “‘This is so manipulative.’ That’s an anchor at a local TV station owned by Sinclair, describing the company’s latest mandate, a promotional campaign that sounds like pro-Trump propaganda. Internal documents call the new initiative an ‘anchor delivered journalistic responsibility message.’ But the staffers who shared the documents with CNN say the promos are inappropriate — yet another corporate infringement on local journalism.”

ProPublica has found that at least 187 Trump political appointees have been federal lobbyists, and many are now overseeing the industries they once lobbied on behalf of. https://t.co/QtEtotbe1U

Peter Navarro “is telling associates he wants Gary Cohn’s job as the president’s chief economic adviser,” according to Jonathan Swan.  “Publicly, Navarro has been coy, telling Bloomberg TV he’s not in the running for the job. But privately, the hardcore nationalist trade adviser is all in for the job.”

SCOOP: In early 2015 Trump met at Trump Tower with two of the guys who would arrange the infamous 6/16 meeting where Manafort, DJT Jr., and Kushner hoped to get Russian “dirt” on Clinton. From #RussianRouletteBook https://t.co/tKNDJxZRZn

First Read: “Despite the millions spent on the race, the high-profile visits and all the national attention, there’s a good case to make that the outcome of Tuesday’s special congressional election in Pennsylvania is highly overrated.”

“But if there’s reason to pay attention to the outcome on Tuesday, it’s this: Trump has put his office’s prestige on the line. In addition to the president holding a rally with Saccone on Saturday, the Washington Post suggested last week that Trump’s move on tariffs is aimed at the voters in PA-18.”

“So the race — despite the new map and already-evident political winds – matters because it matters to President Trump. A win, therefore, would allow Trump to crow that the GOP can still win in Trump Country. But a loss would be devastating for him: After all the money, the campaigning and the tariff timing, to have a Republican lose in a district Trump carried by 20 points would suggest there’s not more the president can do to help GOP candidates, even in Trump Country.”

“In sum, Tuesday’s PA-18 is a perfect microcosm of much of the Trump Era: So much attention and such high stakes on something that didn’t have to be this big – and in large part because Trump made it so.”

This story is INSANE — former Russian spy poisoned with nerve gas *on Western soil* and 20 others being treated, yet most US media yawns.

Philip Bump: “In January, Monmouth gave the Democrats a two-point lead; it’s now nine points. Quinnipiac’s new poll gave the Democrats a 10-point lead, lower than other recent polls from the pollsters but hardly bad news. RealClearPolitics compiles a running daily average of the generic ballot margin. In December, there was a lot of discussion of the sizable lead the Democrats enjoyed which, in January, became talk of how the margin was narrowing. Now it’s widening again, making up nearly half of what was lost from the December peak. The Democratic advantage now stands at 9.1 points.”

Nate Cohn: “There’s nothing new about a short-term swing in the polls that fails to cause a big change in a race. So far this year, just about every big shift in the generic ballot has proved short-lived. Highly sensitive, short-term estimates have misled much more often than they’ve presaged a lasting change.”

“Current and former officials also describe Veprek’s appointment as a blow to an already-embattled refugee bureau. Trump has has made clear his disdain for liberal immigration policies, and the bureau has been adrift under Secretary of State Rex Tillerson — even as a record 65 million people are displaced around the world due to war, famine and other calamities.”

“On Wednesday, Sanders told reporters that the arbitration was won ‘in the President’s favor.’ The statement is an admission that the nondisclosure agreement exists, and that it directly involves the President. It is the first time the White House has admitted the President was involved in any way with Daniels.”  Said a source: “POTUS is very unhappy. Sarah gave the Stormy Daniels storyline steroids yesterday.”

Former Tennessee Gov. Phil Bredesen’s (D) campaign for U.S. Senate told the FBI that it fears it has been hacked, amid growing concern that candidates in the 2018 election could be targets of cyberattacks, the APreports.

“The possible hack comes amid warnings from U.S. officials that the 2018 midterm elections could face additional cyber meddling from Russia and others, from both domestic and international sources.”

“House Majority PAC, the group that helps House Democrats, is making $43 million in TV reservations in 33 media markets for the final weeks of the 2018 campaign,” Roll Call reports.  “These initial reservations will be placed over the course of the month, which is the earliest the super PAC has booked time for the fall. Reserving early allows HMP to lock in lower rates in some expensive media markets.”

New York Times: “Mr. Kushner’s meeting with President Enrique Peña Nieto was meant to soothe tensions… But the encounter between Mexico’s president and Mr. Kushner, a political newcomer whose top-secret security clearance was stripped last month, underscored the profound shift in approach that the Trump administration has taken with Mexico, and with the region more broadly.”

”Officials announced the visit less than a day before it happened, offering no guidance on what would be discussed.”

“Beyond that, Mr. Kushner, who also met with Mexico’s foreign minister, did not invite the American ambassador — Roberta S. Jacobson, a diplomat with more than 30 years of experience in the region — to join him in the meetings.”

Sen. Elizabeth Warren (D-MA) announced that she’s donated $5,000 to every state Democratic party, for a total of $250,000, Politico reports.

Records show the Interior Department spent nearly $139,000 last year for construction at the agency that was labeled on a work order as “Secretary’s Door,” the AP reports.