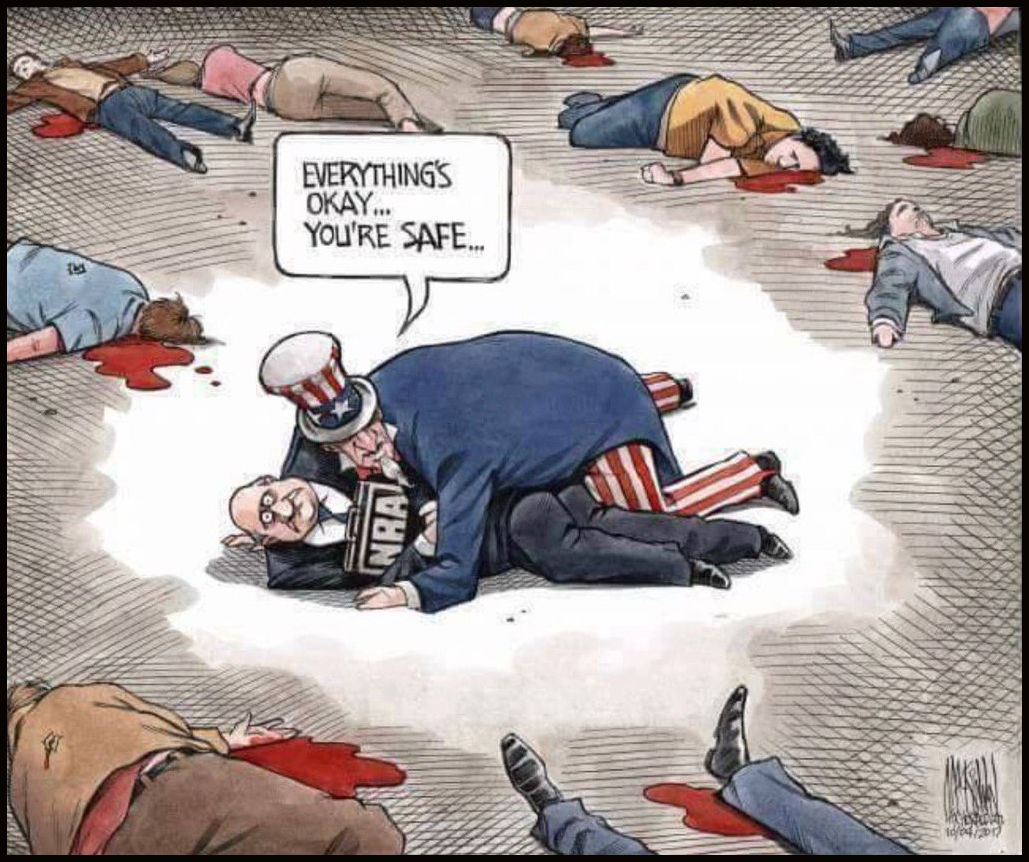 Here’s some crazy for ya!

On February 15, the day after the Parkland shooting, Idaho lawmakers introduced a bill to strengthen the state’s “stand your ground” law to the floor. The measure would expand the definition of justifiable homicide to include not merely defending a shooter’s home but his or her vehicle or place of employment, as well. On Monday, the bill passed the majority-Republican Senate after a vote along party lines.

Sheesh, people seem to really want to kill other people. Talk about itchy trigger fingers. Who thinks like this? Perhaps we should discuss this sort of mental illness.

A South Dakota bill exempts private schools and churches from a law that made it illegal to carry guns on school grounds. The bill, introduced in January, passed the House on the day of the Parkland shooting, then the Senate on Thursday.

Guns, guns and more guns! Everywhere! What could go wrong? People who feel the need to carry all the time, everywhere, are immediately disqualified as “responsible” gun owners. Paranoid people shouldn’t have guns. This is a chipping away law. Brace yourself for the next step.

On Tuesday, the West Virginia House passed, by 85-14, an NRA-backed bill forcing private businesses to allow employees and visitors to keep firearms in cars parked on private property. Twenty-two states have similar “parking lot” laws. West Virginia lawmakers rejected amendments that would have made exceptions for chemical plants and churches.

So much for private property!

Indiana, Rep. Jim Lucas filed an amendment this week to expand an existing bill aimed at letting Hoosiers take guns into schools and churches. Citing Parkland, Lucas says the bill now needs to be broadened to guarantee a right to carry on all state-owned property. “We just need to eliminate gun-free zones,” Lucas said according to the Indianapolis Star.

All roads lead to more guns. And let’s face it, if you think you need your guns everywhere then you aren’t a responsible gun owner. Why? Because if you constantly feel under threat (at home, work, school church, grocery shopping) there’s no way you’re securing your gun. How could you when you never know when you’d need it? If their fear is real (it’s not) then they’re packing at all times – sleeping, chopping vegetables, picking the kids up from school and tucking them in at night. It doesn’t work any other way.

On Wednesday, Tennessee state Rep. Andy Holt, a Republican, introduced a bill to let people carry guns in airports, with a special provision that bars local governments from passing their own gun regulations. It is next scheduled for consideration on Tuesday, March 6.

Airports! You can’t take bottled water through security, but a gun is a-okay? Oh, and don’t try to govern your locality because… something, something… we’re hypocrites when it comes to local control.

You know, this nonsense may end up making the NRA’s fears come true. Keep pushing, and your behavior may result in gun laws that go further than your worst nightmare.