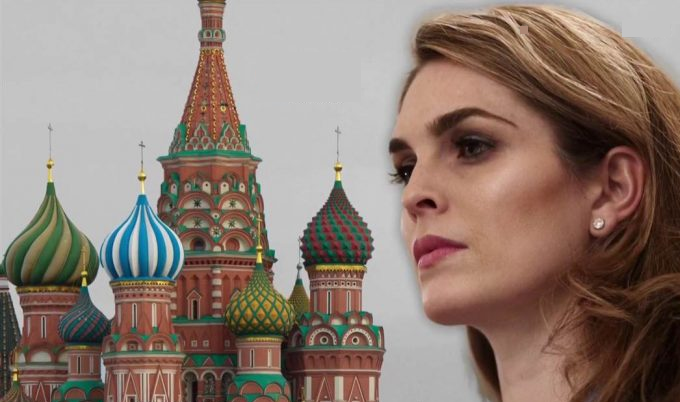 After admitting under oath before Congress that she lied all the time to cover up for the President, Hope Hicks said that she was resigning as White House communications director immediately, the New York Times reports.  “Ms. Hicks, 29, a former model who joined Mr. Trump’s 2016 presidential campaign without any experience in politics, became known as one of the few aides who understood his personality and style and could challenge the president to change his views.”

“She told colleagues that she had accomplished what she felt she could with a job that made her one of the most powerful people in Washington, and that there would never be a perfect moment to leave… She did not say what her next job would be, and it was unclear what the departure date is, although it is likely to be in the next few weeks.”

An ally close to President Trump told CNN that President Trump berated White House communications director Hope Hicks after her testimony to the House Intelligence Committee in which she admitted she sometimes told “white lies” to protect the president. Said the source: “She was his last emotional crutch.”

“Mr. Kushner has reported owning hundreds of partnerships, limited liability companies and other entities, but he is not required to disclose the lifeblood of any real estate firm’s business: its lenders and outside investors.”

This is corruption.  The corruption so shockingly brazen that you have to wonder if Kushner is desperate, stupid or both.  Either way, he is going to jail for this alone.  This is the type of corruption the US Government would call out in just about any other country. It’s now taking place inside the White House.  If Chelsea Clinton did this, Republicans would not even wait for an indictment.  They would execute her and her parents on the Ellipse as soon as possible

Mueller's team is asking witnesses pointed questions about whether Trump was aware that Democratic emails had been stolen before that was publicly known, and whether he was involved in their strategic release, people familiar with the probe tell NBC News. https://t.co/j0Gw0ldVHs

“Special counsel Robert Mueller’s team is asking witnesses pointed questions about whether Donald Trump was aware that Democratic emails had been stolen before that was publicly known, and whether he was involved in their strategic release,” NBC News reports.  “Mueller’s investigators have asked witnesses whether Trump was aware of plans for WikiLeaks to publish the emails. They have also asked about the relationship between GOP operative Roger Stone and WikiLeaks founder Julian Assange, and why Trump took policy positions favorable to Russia.”

“The line of questioning suggests the special counsel, who is tasked with examining whether there was collusion between the Trump campaign and Russia during the 2016 election, is looking into possible coordination between WikiLeaks and Trump associates in disseminating the emails, which U.S. intelligence officials say were stolen by Russia.”

Further, “investigators for special counsel Robert Mueller have recently been asking witnesses about Donald Trump’s business activities in Russia prior to the 2016 presidential campaign as he considered a run for president,” CNN reports.  “Questions to some witnesses during wide-ranging interviews included the timing of Trump’s decision to seek the presidency, potentially compromising information the Russians may have had about him, and why efforts to brand a Trump Tower in Moscow fell through.”

“The lines of inquiry indicate Mueller’s team is reaching beyond the campaign to explore how the Russians might have sought to influence Trump at a time when he was discussing deals in Moscow and contemplating a presidential run.”

Finally, on the Mueller front yesterday, the Washington Post reports that Mueller “has been investigating a period of time last summer when President Trump seemed determined to drive Attorney General Jeff Sessions from his job.”

“In recent months, Mueller’s team has questioned witnesses in detail about Trump’s private comments and state of mind in late July and early August of last year, around the time he issued a series of tweets belittling his ‘beleaguered’ attorney general… The thrust of the questions was to determine whether the president’s goal was to oust Sessions in order to pick a replacement who would exercise control over the investigation into possible coordination between Russia and Trump associates during the 2016 election.”

Also interesting: “Behind the scenes, Trump has derisively referred to Sessions as ‘Mr. Magoo,’ a cartoon character who is elderly, myopic and bumbling.”

President Trump voiced support for confiscating guns from certain dangerous individuals, even if it violates due process rights, The Hill reports.  Said Trump: “I like taking the guns early like in this crazy man’s case that just took place in Florida … to go to court would have taken a long time. Take the guns first, go through due process second.”

I do not believe Trump for a second. Remember the Immigration Meeting performance.  He immediately sabotaged it with a second meeting where he revealed his racist desires.

President Trump launched a new attack on Attorney General Jeff Sessions, calling it “disgraceful” that he has asked an inspector general and not Justice Department lawyers to investigate potential surveillance abuses, The Hill reports.  Sessions immediately fired back, in a “I’m tired of your shit” kind of response, saying he is loyal to the law and the Constitution, and not to Trump.

Said Sessions: “We have initiated the appropriate process that will ensure complaints against this department will be fully and fairly acted upon if necessary. As long as I am the attorney general, I will continue to discharge my duties with integrity and honor, and this department will continue to do its work in a fair and impartial manner according to the law and Constitution.”

AP poll finds 57 percent of Americans believe President Trump is racist, including majorities of blacks and Hispanics, and nearly half of whites. https://t.co/jvXWZzbDh3

A new AP-NORC poll finds that 57% of Americans, including more than 8 in 10 blacks, three-quarters of Hispanics and nearly half of whites, said they think President Trump is racist.  Eighty-five percent of Democrats consider Trump racist, but just 21% of Republicans agree.

“How many Jews were put in the ovens because they were unarmed?” — Rep. Don Young (R-AK), quoted by Alaska Public Media.

Democrats are aligning behind a greater role for public health insurance thanks largely to the GOP's unremitting hostility to the Affordable Care Act https://t.co/uOjHt4Jd2c

“A judge in Washington on Wednesday set a September 17 trial date for former Trump campaign chief Paul Manafort on charges from special counsel Robert Mueller, including money laundering and failing to register as a foreign agent,” Politico reports.

“The decision from U.S. District Court Judge Amy Berman Jackson would put Manafort on trial at the height of the midterm campaign season, a potentially unwelcome distraction for Republicans as they try to maintain majorities in Congress.”

States are considering all sorts of different Obamacare hacks for next year. The results are likely to be widely divergent. https://t.co/mh7iE71UCW

First Read: “If there was one issue Donald Trump campaigned on more aggressively than the others in 2016, it was the importance of handling classified information — when it came to Hillary Clinton’s private email account and server… Why is this stroll down memory lane important? Yesterday, we learned that White House senior adviser and Trump son-in-law Jared Kushner — who had access to highly classified information and was even viewing the Presidential Daily Brief — lost his top-security clearance.”

“We’ve seen the Trump White House engage in plenty of hypocrisy over the past year — the vows to clean up the ‘swamp,’ the promises that wealthy Americans wouldn’t benefit under the tax law — but its carelessness about who is seeing classified information might be the biggest hypocrisy of all.”

“And regarding that Washington Post report about how foreign governments have discussed how they can manipulate Kushner, no one can survive a story like that — unless you’re the president’s son-in-law.”

“Here’s how significant things don’t get done in Washington even in a moment of crisis and opportunity,” the New York Times reports.  “The president throws out a hodgepodge of ideas but refuses to put his full weight behind any of them. Senate Republicans, grappling for an answer that responds to public clamor but doesn’t alienate their conservative base, focus on a small fix unlikely to satisfy many people even if it could overcome internal divisions. House Republicans say they will wait to see what the Senate does — though history has shown that can be a very long wait. Democrats push for a broad debate that Republicans want nothing to do with.”

“That’s where Washington stands now on the subject of new gun legislation after the school shooting in Parkland, Fla. Despite immense public pressure in part from students who escaped the shooting, the outlook for any consequential action remains dim as the president and lawmakers diverge on how best to respond.”

Vox: The Freedom Caucus is fighting to rein in Trump on gun control.

Worshippers clutching AR-15 rifles and some wearing bullet crowns, participated in a commitment ceremony today at World Peace and Unification Sanctuary, in Newfoundland, Pa. The event led a nearby school to cancel classes for the day. Photos @jacquelinelarma pic.twitter.com/GXzrZeK41z

What fresh hell is this?

Jonathan Swan: “The Trump family — and the president’s oldest son, Don Jr., in particular — was angry about the overwhelmingly negative TV coverage about Jared Kushner last night, and feels White House Chief of Staff Kelly is hanging Jared out to dry.”

“Over the past few weeks I’ve found fewer people internally willing to defend Jared. Politically, I’ve never seen him so exposed.”  Said one White House official: “Javanka and Kelly are locked in a death match. Two enter. Only one survives.”

Associated Press: “The rollout of Brad Parscale’s announcement as Trump’s 2020 campaign manager was not without a hitch. A statement released Tuesday by the Trump campaign attributed to White House senior adviser Jared Kushner was in apparent violation of federal law prohibiting the use of official titles in political work. The campaign used Kushner’s title and his position as an ‘assistant to the president’ in its press release announcing Parscale’s role.”

“The Hatch Act bars government employees from using their official titles in political work. Press secretary Sarah Huckabee Sanders said Tuesday all senior officials and Cabinet secretaries have been briefed on the prohibition.”

“Voters were undeterred by the 2016 cries of alarm from Democrats — and some Republicans — that Donald Trump was unqualified to be commander in chief, but a group of Democrats is betting Trump’s record in office will push national security issues to the fore in the 2018 midterms and the next presidential election,” the Washington Post reports.

“A group of mostly young veterans of the Barack Obama administration and the Hillary Clinton 2016 presidential campaign is launching a national security political strike force aimed at countering Trump and Republicans.”