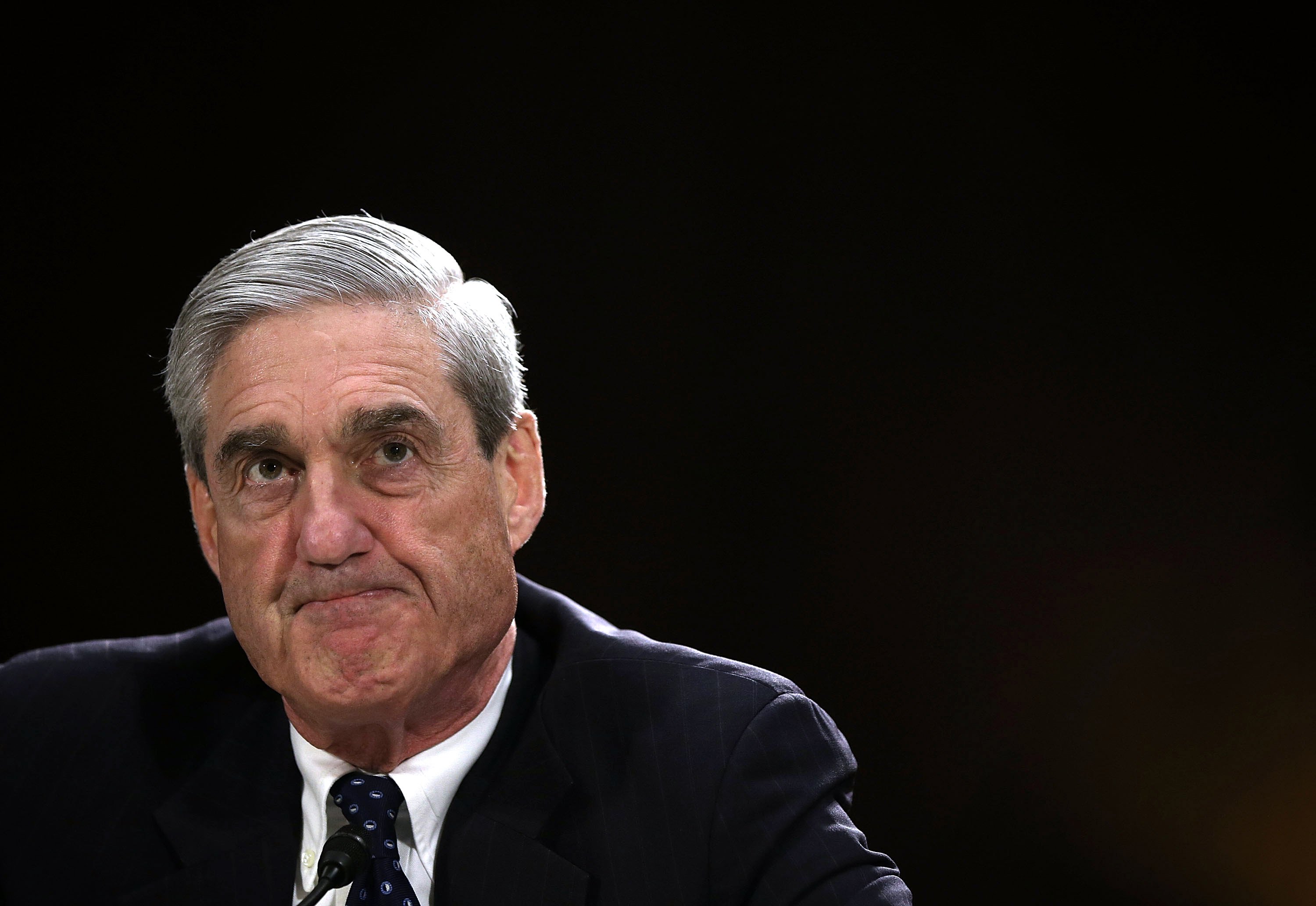 “New charges were filed Thursday against former Trump campaign chairman Paul Manafort and his business partner, ratcheting up the legal pressure on them as they prepare for a trial later this year,” the Washington Post reports.

“A new indictment has long been expected in special counsel Robert Mueller’s prosecution of Manafort and his right-hand man, Rick Gates, on fraud and money laundering charges. Manafort served as President Trump’s campaign chairman from June to August 2016. Gates also served as a top official on Trump’s campaign. The new indictment contains 32 counts, including tax charges.”

“The new charges come as Gates’ legal strategy and defense team are still in question.”

BuzzFeed News: “More than nine months into special counsel Robert Mueller’s investigation — the most-watched, most-speculated-about criminal probe in recent history — his office continues to unveil new criminal charges that catch the press, the public, and the political world off guard.”

“Prosecutors are bound by confidentiality and ethics rules not to disclose information about pending criminal investigations, and grand jurors and court employees involved in grand jury proceedings are barred from talking about their work. It’s common for criminal charges to come as a surprise. But Mueller’s ability to control the flow of information in such a high-profile investigation and deliver a shock with the revelation of a new case has stood in contrast to the steady stream of behind-the-scenes stories coming out of the Trump administration.”

President Trump suggested violent entertainment is to blame for mass shootings in the United States, the Daily Beast reports.  His solution: “You see these movies, they’re so violent. And yet a kid is able to see the movie if sex isn’t involved, but killing is involved. And maybe they have to put a rating system for that. You get into a whole very complicated, very big deal but the fact is that you are having movies come out that are so violent with the killing and everything else that maybe that’s another thing we’re going to have to discuss.”

“It was unclear whether Trump was aware that the Motion Picture Association of America already rates films based on graphic sexual or violent content; or if he was suggesting that ratings system needs to be overhauled.”  I think he legit doesn’t know that there is already a movie rating system that has been in place since 1968.  Remember, movies are not about him.   So why see them?

Defense Secretary Jim Mattis “is expected to propose to President Trump that transgender members of the U.S. military be allowed to continue serving despite the president’s call last summer for a ban on all transgender service,” the Washington Post reports.

“With tensions flaring between President Trump and national security adviser Lt. Gen. H.R. McMaster, the Pentagon is considering options that would allow the President to potentially move the three-star general out of his current role and back into the military,” CNN reports.

“A search is quietly being conducted by the Pentagon to see if there is a four-star military job suited for McMaster… Several sources told CNN that the push for a replacement comes after months of personal tension between McMaster and Trump.”

Missouri Gov. Eric Greitens (R) was indicted on a felony invasion of privacy charge, the Kansas City Star reports. “The charges stem from a 2015 affair and allegations that he threatened to release a nude photograph of the woman, taken while she was blindfolded and her hands were bound, if she ever spoke publicly about the affair.”

Ron Brownstein: “The shifting geography of the electoral battlefield is providing gun-control advocates their best opportunity in years to tilt the balance on the issue in Congress.”

“Since the early 1990s, the National Rifle Association has sustained an impregnable congressional blockade against new gun-control measures. But the weakest link in that chain has always been the Republican-held suburban seats in the House of Representatives, where many voters support reasonable limits on gun access.”

How the media erases people of color from rural communities: https://t.co/pmljRxEiHs pic.twitter.com/qZ85HXdVq2

“The head of a federal agency who has helped U.S. states protect election systems from possible cyber attacks by Russia or others is being removed from his post by Speaker Paul Ryan (R-WI) and the White House,” Reuters reports.

“Matthew Masterson, currently chairman of the U.S. Election Assistance Commission, has been passed over for a second four-year term as one of the agency’s four commissioners… It is up the House speaker to recommend a nominee for the commissioner post that Masterson currently holds, with the president then making a formal nomination.”

Rick Hasen: “Masterson, a Republican appointee has been completely nonpartisan and professional, and willing to work across the aisle on issues… And it suggests he’s being canned because he’s not a party hack.”

Vice President Mike Pence “rallied thousands of conservative activists on Thursday to fight back against a Democratic drive to take over the U.S. Congress in 2018 elections, calling a Republican victory at the midterm votes crucial to advancing President Trump’s agenda,” Reuters reports.

Said Pence: “The other side is motivated. The other side is mobilized. And so today, to the men and women of this conservative movement, I admonish you: Let this be the day that we as a movement decided to deliver another victory for the American people in 2018.”

He described Democrats as only against Trump: “Their platform can be summed up in only one word: Resist. Resist our policies. Resist our president, and resist the progress the progress that you and I and our entire movement has fought for so hard, so long, to achieve.”

Yesterday, I talked to experts and advocates about whether Trump's proposed bump-stock ban is a meaningful move: https://t.co/ulIr4e1NAn

Taegan Goddard on why Trump will never buck the NRA:  “Their agenda and world views align almost perfectly — and guns are only a part of it.  [Yesterday, Wayne] LaPierre echoed Trump’s rhetoric on “the elites” and the media being part of a coordinated effort to “smear” gun owners.  Said LaPierre: “Socialism is a movement that loves a smear. Racists, misogynists, sexists, xenophobe and more. These are the weapons and vitriol these character assassinations permanently hang on their targets because socialism feeds off manipulated victims.”

He also claimed that “European socialists” are taking over the Democratic Party and called out possible 2020 presidential hopefuls Sen. Kamala Harris (D-CA), Sen. Elizabeth Warren (D-MA) and Sen. Cory Booker (D-NJ) by name. He said that they aim to “eliminate due process” which is “the very gold standard of the socialist state.”  Just minutes before LaPierre was scheduled to speak, Trump tweeted in defense of the NRA and called LaPierre an “American patriot.””

That is why you cannot believe anything Trump says on guns. There will be no bump stock ban, no new expanded background checks.  Any moves will be cosmetic to give them media cover to get through the coming weeks.

Jonathan Swan: “Every few months, friends, family and advisers like Ivanka Trump, Rupert Murdoch and Gary Cohn fantasize Trump will tap his superpower as a force for good — to pass a big infrastructure bill, fight global warming, strike an epic immigration deal. Now, they dream of new gun controls to protect schools, kids and the innocent. He could, but he almost certainly won’t.”

“He may not fully understand the cultural significance of guns in middle America. But he believes that it’s cultural, not political, issues that truly move the needle.”

U.S. District Court Judge Trevor McFadden — who was appointed by President Trump, donated to his campaign and worked on his presidential transition team — has rejected requests to recuse himself from overseeing a legal battle involving Fusion GPS, the research firm that commissioned the so-called “dossier” of unverified intelligence that contains claims about Trump’s alleged ties to Russia, ABC News reports.

“Whenever there is a mass shooting, the National Rifle Association has a well-rehearsed response: Say very little until the inevitable discussion about gun control cools down,” the New York Times reports. “But as the leaders of the country’s most influential gun advocacy group kept quiet after the school shooting last week in Parkland, Fla., that claimed 17 lives, a furious debate played out on NRATV, the organization’s online video channel.”  “Its hosts spoke chillingly of leftist plots to confiscate weapons, media conspiracies to brainwash Americans into supporting gun control and a ‘deep state’ campaign to undermine President Trump.”

The constant churn of news around Trump tends to bury some of the most significant stories.https://t.co/Hhwad1E45A

“I did not know that Russian bots were promoting my campaign… I would say that the real question to be asked is: What was the Clinton campaign doing about Russian interference — they had more information about this than we had.” — Sen. Bernie Sanders (I-VT), in an interview with Vermont Public Radio.

Bernie, you should stop imitating Donald Trump with your constant hatred of Hillary Clinton.   Seriously, if this was a blind quote, you would have first thought Trump had said it.

Matt Lewis: “The organizers of CPAC apparently searched the four corners of the globe to assemble a ‘legion of doom’-style roster — a collection of some of the worst ‘conservative’ supervillains who generally share a populist, ethno-nationalist brand of politics (and some, I assume, are good people). Of course, it’s not just Le Pen. The lineup is a veritable murderer’s row of nationalists, including UKIP leader Nigel Farage, Jeanine Pirro, and Seb Gorka—and a panel titled: ‘Kim Jong Un-iversity: How College Campuses are Turning into Reeducation Camps.’”

“After a week of media silence following the school shooting in Florida, the National Rifle Association went on the offensive in its first public response to the massacre, pushing back against law enforcement officials, the media, gun-control advocates and the teenage survivors of the massacre who have pleaded for stricter gun laws,” the Washington Post reports.

“The NRA also released an advertisement Thursday morning that said ‘the mainstream media love mass shootings’ and claimed that members of the media benefit from covering mass shootings in an effort ‘to juice their ratings and push their agenda.’”