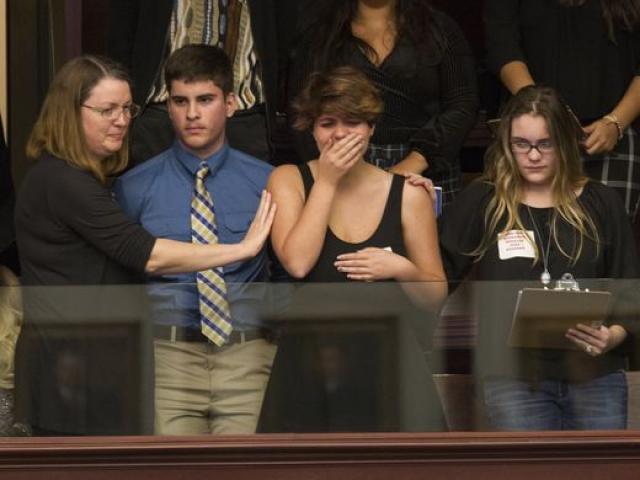 After a gunman took the lives of 17 people at Marjory Stoneman Douglas High School in Parkland, Florida, lawmakers are facing renewed calls for legislation on gun reform.

The NRA accepted CNN’s invitation to participate in the town hall and national spokeswoman Dana Loesch will represent the organization.

The CNN town hall, “Stand Up: The Students of Stoneman Douglas Demand Action,” will also bring together the victims’ classmates, parents and other community members, as well as Florida Rep. Ted Deutch and Sens. Bill Nelson and Marco

If you read my post yesterday, you’ll know what these kids are in for. Here’s the pertinent paragraph:

There will be endless comments over the exact – and I mean exact – make and model of guns. Do not follow them down that deflection rabbit hole. There will be lots of talk, with very few links, of the need for a “good guy with a gun”, which is complete fantasy and a favorite NRA talking point because… gotta sell more guns! There will be talk about the 2nd Amendment and they’re 100% certain of what it means, even though Constitutional scholars disagree. There will be talk about inner city gun violence without ever acknowledging the people fighting to fix this problem (they’ll pretend that we don’t care about this), or admitting how guns end up in cities with tight gun control laws (Hint: porous borders and a black market enabled by not knowing who is buying all these guns and reselling them). There will be attempts to frame people who support stricter guns laws as people who want to take everyone’s gun away. There will be talk about protecting themselves and their family, even though statistics show that you and your family are less safe with a gun in the home. There will be fear. Lots and lots of fear, camouflaged in a super hero cape.

In addition, Dana will play up women needing guns – only not against their abuser since the NRA is fine with abusers having guns. She’ll cite stranger-danger and list that same old, tired example. She’ll talk about the laws on the books, and how if guns were illegal or we strengthened background checks/waiting periods people would just steal them or buy them <strike>at gun shows</strike> on the black market. Add your standard NRA responses in the comments.

I’m expecting Loesch to cite banning bump stocks as the NRA’s major concession, but that’s all I see happening. I expect her to blame the kids, parents, community, police, social workers and the FBI – even though I have no idea what anyone could have charged this shooter with before he killed. It all feels very Minority Report.

Also, who in their right mind thought the NRA debating kids in trauma was a good idea? That these were good optics? Is the plan to paint Loesch as reasonable and these kids and parents as emotional?

Why would the NRA agree to this? Why would CNN host something like this – and not invite a national spokesperson for the gun safety side – someone who can quickly counter Loesch’s statistics and “facts”? I don’t expect the kids, parents and community (most of which have just entered the gun debate) to be savvy on this issue.

What exactly is the point of this? What am I missing. Because this Town Hall is completely out of character for the NRA. Their usual M.O. when it comes to mass shootings is to lay low. This Town Hall move tells me that these kids have them very, very nervous. Loesch will need to discredit them – and she’s been trained to do just this. She’ll have to, won’t she? She’ll have to point out everything they did wrong. She’ll have to point out that if they had done something then this massacre wouldn’t have happened. She’ll have to blame them… and, of course, mental illness. I bet I’d die of alcohol poisoning if I started a drinking game every time mental illness is uttered.

See the picture at the top of this post? That’s who the national spokesperson of the NRA will be debating. Even if all these kids do is break down the country will rally behind them. If their arguments are emotional the country will feel their pain. I’m not seeing how the NRA “wins” this. Again, what am I missing?

If you want to watch:

10 comments on “Tonight: CNN Gun Town Hall – NRA To Go Up Against Students, Parents and Community Members Affected By Shooting”